Punked by pink: where's the bailout for us? 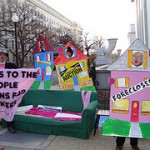 In a few minutes, the House finance committee will face CEOS of "the Big Three" American auto companies and debate whether it should approve a bailout for the auto industry. CODEPINK will be at the hearing (they were yesterday -- check out this Associated Press photo of Treasury Secretary Hank Paulson staring disdainfully at Medea Benjamin) demanding a bailout for Americans, not mismanaged corporations. They'll be outside, too, wearing hilariously clever cardboard cars and houses with couches and chairs (check out the slide show of it from yesterday here -- just try not to smile).

Many have wondered why CODEPINK, an anti-war group, has taken on the bailout issue within the past few months. Why are we getting involved? What do we have to say?

The way we see it (and we're hardly alone) Congress has spent billions on the Iraq War and billions on the occupation of Afghanistan. Now it's spending billions on mismanaged corporations, bailing them out for their own failures.

What of the American people? Thousands lose their homes to foreclosure each day, many from shady mortgage deals, millions cannot afford nor can find jobs with health care, education and instrastructure funds continue to be slashed. Where's the billions for them?  Why does Congress value bankers and the auto industry, which have done themselves in, more than innocent American people? We need a bailout, and Congress must slow its fiscal bleeding into an illegal war and despicable bailouts. We must examine our war economy and get serious about a peace economy.