Warmongering Priyanka Chopra MUST be Removed as a UNICEF Goodwill Ambassador

Warmongering Priyanka Chopra MUST be Removed as a UNICEF Goodwill Ambassador 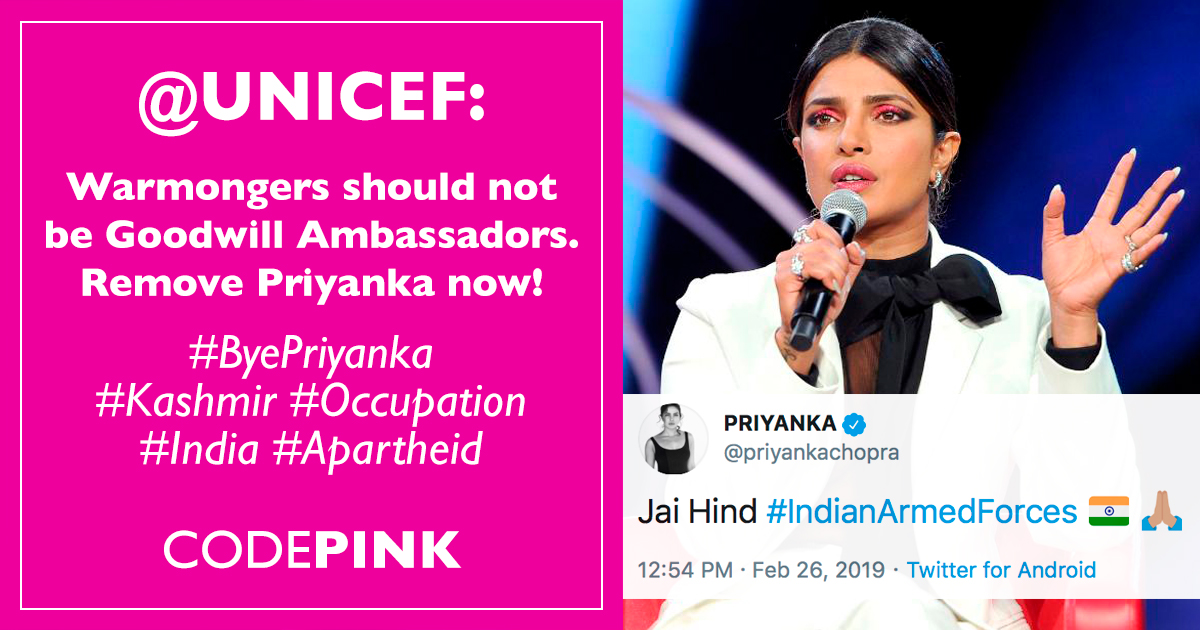 We at CODEPINK are joining the international call for UNICEF to remove warmongering Priyanka Chopra as a UNICEF Goodwill Ambassador. There is no #goodwill in nuclear warfare! Please join us by signing the letter below:

Priyanka Chopra, an international superstar, was made a UNICEF Goodwill Ambassador for Peace in 2016. These ambassadors are usually celebrities who agree to use their massive platforms to advocate for global peace. Priyanka clearly did not get that memo.

Earlier this year in February, India and Pakistan, two nuclear powers, were on the brink of war. For the first time since the two countries nuclearized, India fighter jets crossed the border into Pakistan to carry out airstrikes. At this point, nuclear war was a real possibility. Instead of acting as a Goodwill Ambassador should, by promoting peace, Priyanka Chopra tweeted “Jai Hind [Hail India]  #IndianArmedForces 🇮🇳 🙏🏽.” When given the opportunity to call for peace, Priyanka instead decided to cheer on not just any war, but a potential nuclear war. This is unacceptable rhetoric from anyone, let alone a UNICEF Goodwill Ambassador.

This conflict is one of the most dangerous flashpoints in the world: we must do everything we can to avoid the risk of escalation between nuclear-armed India and Pakistan and to support the freedom of Kashmiris.

As India moves in on Kashmir, the stakes are higher than ever. India and Pakistan have fought three wars over Kashmir since the partition of the Indian subcontinent in 1947. Today, Indian occupied Kashmir is the most heavily militarized region in the world, with over 700,000 Indian troops deployed in the region, conducting a litany of human rights abuses against the Kashmiri people including extrajudicial killings, torture, and rape. of the Kashmiri people. And now that the Modi government has revoked Article 370, which granted Kashmir a limited political, economic, and judicial autonomy, many Kashmiris fear this will only expedite India’s settler-colonial project on their land. Since the revocation, curfew and a complete communications shutdown has been imposed on more than 7 million Kashmiris.

Last week at Beautycon in LA, Pakistani-American activist Ayesha Malik confronted Priyanka for her warmongering, saying that "it was kind of hard hearing you talk about humanity, because as your neighbour, a Pakistani, I know you are a bit of a hypocrite.” Priyanka responded that she is not a fan of war but is “patriotic.” However, there is little difference between patriotism and warmongering when one’s allegiance is to Modi’s Hindu nationalist government.

Just this week, Pakistan's Human Rights Minister Shireen Mazari filed an official complaint to the UN, calling for Priyanka's removal as a Goodwill Ambassador, as well. In the letter, she said, “Her jingoism and support for violations by the Modi government of international conventions and UN Security Council resolutions on Kashmir, as well as support for war, including nuclear war, undermines the credibility of the UN position to which she has been elevated.”

As the humanitarian crisis in Kashmir escalates, so do tensions between the two neighboring countries. Experts are warning us that everything must be done to avoid the risk of escalation between nuclear-armed India and Pakistan. Many Indians of actual goodwill are calling out the Modi government on its crimes and human rights violations.

But, Priyanka Chopra, a Goodwill Ambassador, has remained silent on Kashmir, has not once denounced India’s of human rights violations against Kashmiris, and has instead promoted war with Pakistan.

UN Goodwill Ambassadors for Peace are not supposed to promote nuclear war or occupation. So long as Priyanka Chopra remains in this position, the ambassador program will be devoid of meaning.