Preventing Suicide, One Step at a Time 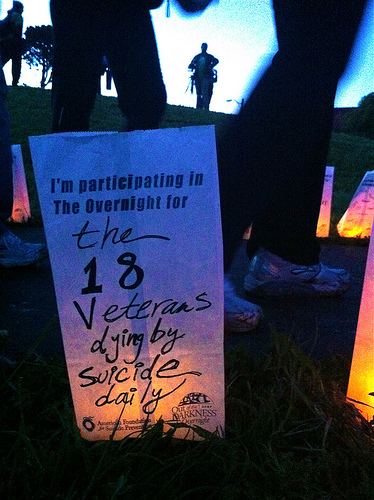 As the sun set on June 9th, nearly 2,000 walkers in the American Foundation for Suicide Prevention’s 18-mile Out of the Darkness Overnight Walk took off down the grassy path toward the Golden Gate Bridge along the promenade that hugs the bay.   The view was not only stunning but also poignant: as the famous Golden Gate celebrated its 75th birthday earlier this month, San Franciscans also mourned the loss of the 1,500 people who have died by jumping over the edge.

Last month I was riding BART to SF and read a statistic in TIME: 18 veterans die by suicide every day – that’s one every 80 minutes. As the subway pulled up to the my stop I saw a large poster advertising the Out of the Darkness Overnight Walk to break the silence about depression and suicide.  Then a couple of weeks later Newsweek ran a feature story on veteran suicide.

For years I’ve been a “Bring Our Troops Home” banner waving leftist, attending anti-war marches and rallies more often than I ate ice cream.  So now that our troops are actually coming home from Iraq, many are killing themselves.  Why?  To dig deeper into the question, I decided to join the Overnight, speak with fellow walkers, and do a little homework.

When Ryan Yurchison returned home from Iraq in 2007, his mom said he was a shell of a man, consumed with tremors, flashbacks and a steadily growing problem with drugs and alcohol.  While waiting for help from the V.A. and placement in an addiction program, Yurchison died of a drug overdose believed to be suicide in May 2010.  The New York Times reported, “For every soldier killed on the battlefield this year, about 25 veterans are dying by their own hands.”  Last year over 6,500 veteran suicides were recorded, which is “more than the total number of soldiers killed in Afghanistan and Iraq combined since those wars began.”  Military suicide rates increased 150% from 2001 to 2009, according to an article in USA Today.

Iraq Veterans Against the War (IVAW) started “Operation Recovery,” a campaign to fight for the rights of service members and veterans to heal, and not be redeployed if experiencing PTSD.  Too often, service members with Post-Traumatic Stress Disorder (PTSD), military sexual assault, or combat stress, are forced to redeploy rather than receiving the support they so desperately need.

It’s clear that there’s a correlation between sending soldiers off to a warzone, asking them to do the unthinkable and dehumanize the alleged “enemy,” and the PTSD that so often follows deployment.  Not only should soldiers receive the care they need, but also those who redeploy traumatized soldiers – and the elected officials who created these monstrous and unnecessary wars – should be held accountable.  As Nicholas Kristof wrote in his op-ed earlier this spring, “We refurbish tanks after time in combat, but don’t much help men and women exorcise the demons of war. Presidents commit troops to distant battlefields, but don’t commit enough dollars to veterans’ services afterward.

Bringing Daylight to a Taboo Topic 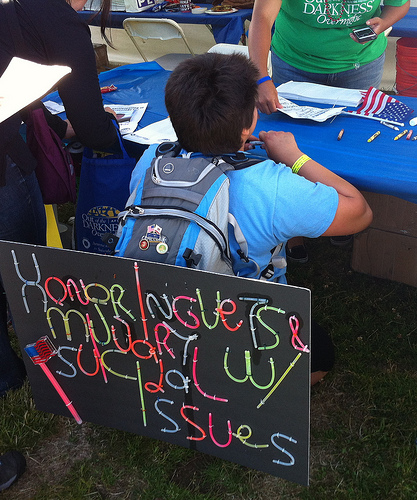 During the Overnight I talked with veterans and military family members who were walking in memory of lost loved ones or as survivors themselves.  One young woman vet told me her story of the military sexual assault that led to PTSD, which the military encouraged her to be silent about.  The Overnight helped inspire her to start an organization to help vets heal from trauma.  She carried a sign written with glow sticks: “Honoring Vets and Military W/ Suicidal Issues.”

Walkers turned the taboo of suicide into a proverbial tattoo.  They wore t-shirts honoring lost loved ones with iron-on images and messages.  They proudly posted Facebook status updates about their plans to walk that generated open discussions in cyberspace.  Fundraising emails solicited not only cash but also caring comments from friends who shared their own stories of suicidality or loss.  Numerous walkers described to me how the process of getting to the walk made them realize they were not alone in their loss or pain.  In fact, 37,000 people in the US die by suicide every year, making it the 10th
leading cause of death, so most of us have loved ones who have either survived
depression or escaped it through death. 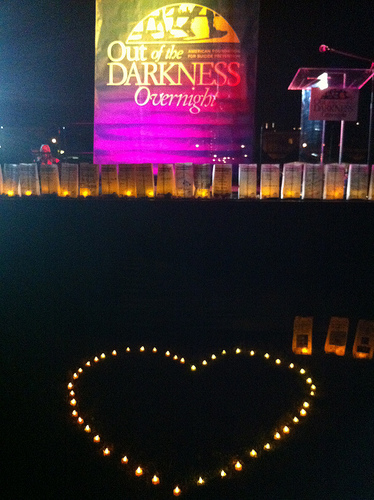 “You have raised more than $2.3 million dollars tonight!” AFSP Executive Director Robert Gebbia declared during the closing ceremony at dawn.   Each walker was required to raise $1,000, and clearly some went far beyond the minimum.

After hearing about the Susan G. Komen Foundation debacle with Planned Parenthood, and dubious reports about the Lance Armstrong Foundation, I was skeptical about where all this money would go.  A sandwich board on the field at Fort Mason proclaimed, “AFSP’s management and fundraising costs are only 15% of expenses, 85% goes to programs.”  So where is that 85% headed?  Some goes to projects such as More Than Sad, which educates students about depression and teachers about suicide prevention.  Most of it goes into research grants.  A local AFSP board member explained to me that recently big pharmaceutical companies were prohibited by law from giving large sums of money to organizations such as AFSP.  Visibly absent were any Prozac swag, Zoloft promotions or other bio-psychiatric propaganda aimed at propping up the pharmaceutical industry.

AFSP asserts that suicide can be prevented by “early recognition and treatment of depression and other psychiatric illnesses.”  And while this is crucial, a mental health advocate I contacted asserted a slightly different perspective, “It’s not about preventing suicide; it's about giving people a reason to live.”  The scientific approach of diagnosing the illness and prescribing a pill doesn’t do much for dealing with the root cause, which in the case of vets seems to be indisputably linked to the trauma of warfare.

Ethan McCord, the Army specialist whose PTSD, after seeing two bleeding children who died in a car bomb in Baghdad, became news in TIME two years ago, said, “The Army's attitude was, 'Let's give this guy drugs and hope they work because we're overbooked and don't have time to deal with it.’  If they had understood what I was going through, I think all of this could have been avoided.”

When I was in college on the Columbia University campus there was a visible stigma around talking about suicide, so fellow classmates and I founded Students Against Silence, a group to speak out about mental health issues and create artistic events, poetry slams, and performances to name the elephant and start healing together.  Then I found the Icarus Project, a national project that seeks to re-envision the culture and language surrounding “mental illness.”  The Icarus Project released a flyer on suicide that seeks to re-frame suicidal thoughts as an opportunity for transformation:

“Sometimes wanting to kill yourself just means you don’t want to live the life you’re living.  You can change your life with that power.  What the hell – you were about to lose your whole life.  Why not instead lose your school, job, pretenses, fears, adherence to society’s standards, shame.  I have found some of my suicidal episodes to be strangely liberating in that way.  I wouldn’t take back any of what made me who I am today.”

Where Are Our National Priorities?


The Overnight walk led us through Pacific Heights, home to Congresswoman Nancy Pelosi and Senator Diane Feinstein.  I couldn't help but wonder whether either of my elected leaders were aware of the walk, or the grave need to increase funding for mental health and veteran care. In reality, Congress just dramatically increased military spending on war and occupation when they approved the National Defense Authorization Act (NDAA). 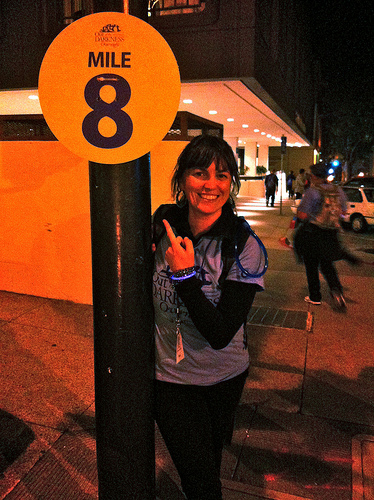 As dawn broke, and a half moon glistened over the mess of walkers who had crossed the finish line and were sprawled across the lawn at Fort Mason, the luminaries highlighting the names of lost loved ones were extinguished, but a new light shone brightly in the faces of the exhausted walkers.  The walk helped bring suicide out of the darkness and provide healing and hope for those who are suffering from loss or depression.

The parting message at the Overnight closing ceremony came from a woman who has struggled with mental illness and depression.  She said, “[I walk] for myself, for my family, and for countless people at the bottom of their abyss.  My voice can save lives.”  Let’s hope that Congress hears her voice, and the myriad other voices clamoring for care, and a healthier society that values life-affirming activities, like real, holistic healthcare, and affordable education, over violence.

Rae Abileah is the co-director of CODEPINK Women for Peace.  She lives in Berkeley, CA, and can be reached at rae[at]codepink.org and @raeabileah.