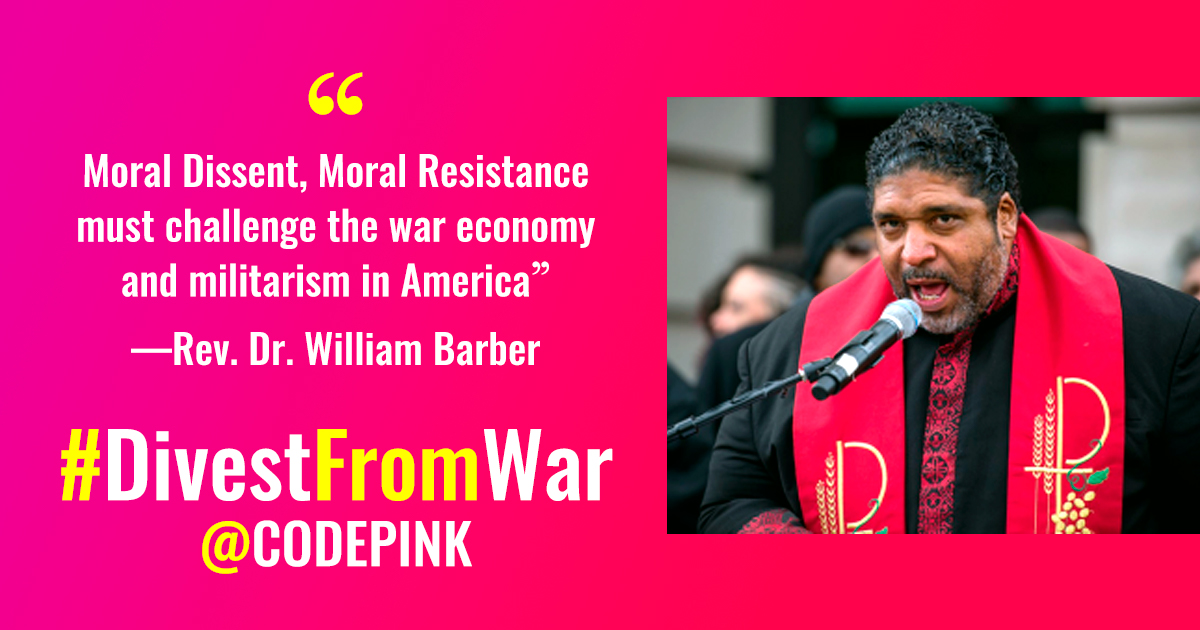 A National Call for Moral Revival

is uniting tens of thousands of people across the country. Over 40 days – six weeks of nonviolent action – the Poor People's Campaign is taking to the streets in more than 40 states and the District of Columbia to challenge the evils of systemic racism, poverty, the war economy, ecological devastation and the nation’s distorted morality. Learn about the Poor People's Campaign and our demands here.

THE WAR ECONOMY: Militarism and the Proliferation of Gun Violence

As an endorsing partner of The Poor People's Campaign, CODEPINK has created the following platforms to help you take action on militarism, gun violence, and the war economy in your state or at the federal level. Download these documents to move towards action with your community, or scroll down to read the platform in full.

“What was true in 1968 and what remains an ancient truth today is the understanding that any nation — we are not an exception — any nation that lives by the sword will ultimately die by the sword.”

War is Stealing from our Communities

The war economy disproportionately impacts people of color and the poor. Instead of investing in social or economic programs that would invest in the future, our country has prioritized investing in weapons and war. During Rev. Barber’s sermon on May 6, he said, “Overcommitment to militarism and war will literally drive us down to the graveyard of life.”

The U.S. is doing exactly that. The military budget in the U.S. accounts for 64% of federal discretionary spending. Of the $818 billion spent in 2017 on military programs, more than a third went directly to private weapons contractors. Weapons manufacturers like Lockheed Martin, Boeing, Raytheon, General Dynamics, and Northrop Grumman spend millions on lobbying every year to ensure that military spending increases. Tax dollars are funneled directly into their coffers, and private citizens and institutions support them by investing in those companies.

In order to take action against the war economy, we must begin to dismantle it so that we can recreate a society that is more just and equitable. We should be investing in our schools and basic infrastructure, and creating economic programs that give people life in their communities.

War, Racism, and Punishing the Poor

War is in our streets and in our neighborhoods. We see the impacts of militarization in how police interact with protestors, such as the protests around the Dakota Access pipeline and the reactions to protests in places like Ferguson. Thanks to projects like the Pentagon’s 1033 program, war has turned our police forces into SWAT teams. Instead of protecting the communities they are intended to serve, our police forces have been armed with military-grade vehicles and weapons, resulting in the escalation of unnecessary force against citizens.

After the Ferguson protests, President Obama restricted police access to some of the most egregious offenders on the 1033 list, such as grenade launchers and anti-landmine vehicles. However, in August 2017 President Trump and Attorney General Sessions rolled back those controls, once again signing off on the militarization of our police forces.

The war economy has filtered into our schools as well. Our children are being assimilated into the military as early as Junior High into High School. Programs like JROTC come into our schools to teach our children to use military-style weapons, when they should be in class learning to become well-rounded citizens. JROTC is also used as a recruiting tool, funneling our children into the military. This practice is defended as a way to lift people out of poverty, when in fact they target children from low-income communities for military recruitment while funneling precious resources to these programs instead of toward critical school infrastructure. In 2016, the army had a budget in excess of $300 million dedicated entirely to recruiting, focusing its high school recruiting at the poor.

Take the example of two similarly-sized high schools in two Hartford suburbs: Avon and Bloomfield. Army recruiters visited Avon High, where only 5 percent of students qualify for free or reduced-price lunch, four times during the 2011-12 school year. Yet at Bloomfield High, where nearly half the students qualify for such assistance, recruiters made more than 10 times as many visits.

The current ‘voluntary’ army relies upon those who are poor to look to the military for a way out of poverty. We may not have a legal draft, as Rev. Barber noted; instead we have “...a poverty draft. A no other job draft. A no money for college draft, and sometimes a no other way to get my family healthcare draft.”

The military and its contractors are also responsible for excessive environmental pollution. The Pentagon is directly responsible for 141 Superfund sites, which are contaminated sites that are so dangerous to human health or the environment that they qualify for special federal clean-up grants. That’s about 10% of all of Superfund sites in the world, easily more than any other polluter. Another 760 or so additional Superfund sites are abandoned military facilities or sites that otherwise support military needs. If the U.S. military were its own country, it would rank 7th in the world for fossil fuel consumption.

The military and its contractors are not subject to basic environmental controls and protections. The EPA estimates that around 40 million acres of land have been contaminated by the military and its contractors. For example, the military open-burns excess munitions without air pollution controls. Munitions contain toxic chemicals such as lead and mercury. We know that those pollutants go up and immediately come down, so they are poisoning the communities where these disposal sites are located and the personnel who are disposing of them. Despite promises from the Pentagon and warnings from the EPA, soldiers in places like Iraq & Afghanistan have been unnecessarily exposed to toxic chemicals by disposing of spent munitions and other waste in open-air burn pits.

Another specific example of the military and its contractors putting our communities at unnecessary risk is the manufacturing of RDX. RDX was developed during WWII and continues to be used today. RDX has been classified as a possible human carcinogen and is connected with causing epileptic seizures in humans. Even though RDX is produced at a single factory in Tennessee, the chemical is used in many military weapons, and RDX contamination has been found at 65 military installations in the U.S. The Pentagon settled a drinking water contamination case against the manufacturing plant for a community that was 143 miles downstream from the plant. Despite the Pentagon’s assertions, the EPA has previously classified RDX as a persistent, concentrated toxin that moves quickly through water sources.

Want to take action on militarism and the war economy in your community? Email divest@codepink.org to connect with our organizers.

Find details about all six weeks of national action here: 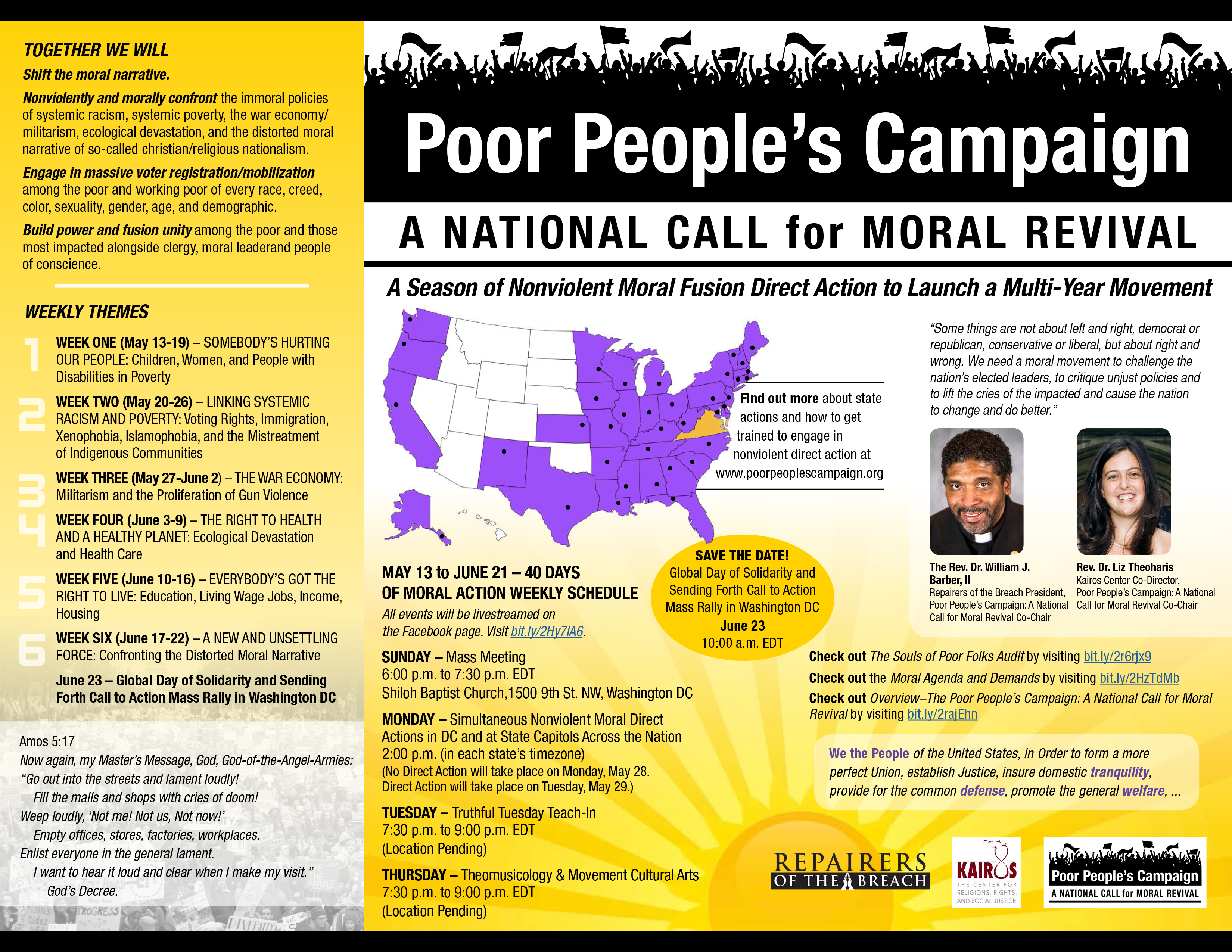