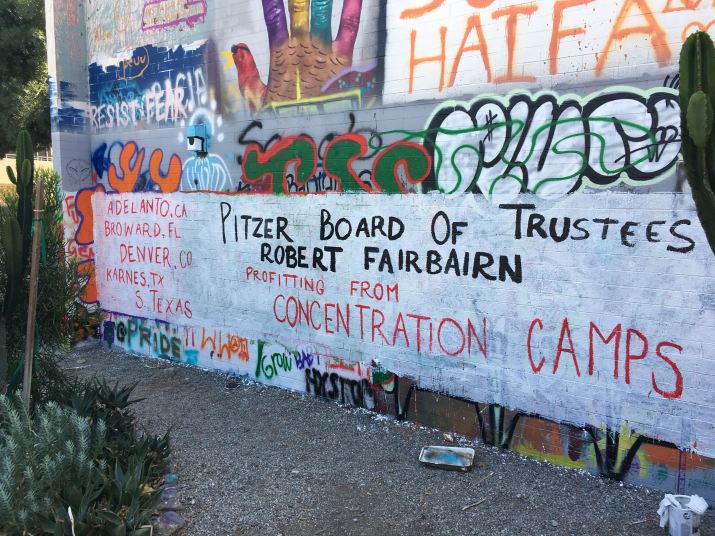 Photo: Student protest against BlackRock Vice Chairman and then Pitzer Trustee Robert Fairbairn, on the wall of a Pitzer College dorm in Fall 2019. | Donnie Denome - The Student Life.

By Daniel A. Segal, Professor of Anthropology & History, Pitzer College of the Claremont Colleges

A trustee exits from the board of a small liberal arts college.  In most cases, not much of a story.  But in this case, the trustee (former trustee now) is Sir Robert Fairbairn, also the Vice Chairman of BlackRock, the world’s largest asset manager.

Fairbairn exited the board of Pitzer College following four semesters of principled student activism, grounded in rigorous research, that insisted he leave Pitzer because of BlackRock’s major financing of so many of the normalized evils of global capitalism in our time.  The evils the student activists highlighted included (but were not limited to) continued extraction of fossil fuels, migrant detention centers scattered across the United States, and Amazon deforestation in defiance of both Indigenous sovereignty and specific calls to BlackRock from the Association of Indigenous People of Brazil.

For four semesters, the student activists who protested Fairbairn’s presence on the Pitzer board consistently told one important truth: BlackRock’s investments cannot be reconciled with Pitzer’s proclaimed “core values” of social responsibility and sustainability.  Fairbairn’s exit from the Pitzer board—after an unusually brief tenure—is nothing less than a tacit but dramatic admission of this truth.

Yet, so offensive was this truth to the Pitzer administration that to keep it from being heard, the administration censored student artistic and political expression at one moment, and made untruthful claims at others. The censorship of student speech occurred after the Pitzer Art Galleries called for student submissions of “manifestos” on the subject of racial justice, and stated, in the Galleries’ call, that all manifestos would be accepted and added to the Galleries’ website.  Yet, when one of the student activists provided submissions that spoke with candor and in truth about Trustee Fairbairn and BlackRock’s investments, the administration stepped in and directed the Pitzer Galleries to reject those student submissions.  A week later, and after widespread student protest, the administration reversed itself, and the BlackRock Manifestos were finally posted to the website—albeit without the administration accepting responsibility for violating and harming campus speech and academic freedom protections at the College.

In a second episode, senior Pitzer administrators came to the Pitzer Student Senate to respond to continued student activism demanding trustee Fairbairn’s exit, and in that forum, the administrators made false claims.  Fairbairn, the administrators declared, bore no responsibility for BlackRock’s investments because he had no role in the firm’s investment decisions—even though BlackRock’s own website stated fully the opposite.  And in a pique of disingenuous sentimentality, the administration subsequently attacked the student activists for “targeting” Sir Robert Fairbairn’s “family”—even though nothing of the sort had occurred.

Rhetorical question: why was Pitzer College’s administration so outspoken about the non-existent targeting of Fairbairn’s family, but fully reticent about the real targeting, precisely by BlackRock’s investments, of migrant families in US detention centers and Indigenous families throughout the Amazon?

Here let me add that an inspiring aspect of the student’s anti-BlackRock campaign was its “moral constancy,” to invoke a phrase Cornel West has drawn from Jane Austen. Thus, while the anti-BlackRock campaign was not defined in terms of the Palestinian struggle, it very importantly did not neglect or exclude that struggle.  Among the many normalized evils of BlackRock that the student activists called out was BlackRock’s financing of the surveillance of Palestinians living under Israeli apartheid by Ebit Systems, the Israel-based electronics firm.  Put simply: this student-driven social justice campaign pushed beyond Progressive Except for Palestine and was quite the other thing: Progressive Without Exceptions.

In a better world, instead of Fairbairn exiting the Pitzer Board, Fairbairn would have brought Pitzer’s stated “core values” into BlackRock and dramatically changed the firm’s investments.  But the great difficulty in that urgent project is that as the world’s largest investment manager, BlackRock is not a “bad apple” of capitalism: it is instead a full-blown proxy for global capitalism.  When a firm has some $8.7 trillion dollars under its management, it can avoid financing the normalized evils of global capitalism only when we leave capitalism behind.

In a profound sense then, the lesson of the students’ anti-BlackRock campaign is not just that Pitzer’s “core values” of social responsibility and sustainability are incompatible with BlackRock, but more fully, that those values are incompatible with capitalism.  And to the extent—small but not trivial—that the students’ anti-BlackRock campaign has taught that truth, this activism has chipped away at capitalism’s social license or legitimacy.  In so doing, it has increased the possibility—even if only a small bit—that we might yet end capitalism before capitalism ends us.  This is an extraordinary achievement.

A trustee exits from the board of a small liberal arts college.  In most cases, not much of a story.  But in this case perhaps, a small but not trivial step toward a social justice and sustainable future for us all.

Kudos to the great student activists at Pitzer and the other Claremont colleges!  Kudos!

As this struggle turns next to challenge Pitzer College’s investments through BlackRock as the College’s asset manager, follow Students Demand Change and Divest5Cs on Instagram, and @SDCCoalition and @Divest5Cs on Twitter.