I stepped into the CODEPINK office in LA exactly three weeks after stepping off a plane from France, where I had spent the last four months. I hadn’t payed attention to any American news in all that time, so it’s safe to say I was a little fuzzy on the issues. No matter, I jumped right in, and was soon following current events and learning to do everything from working the store, to Twitter, to handing out flyers.

A couple weeks later, I had my first experience doing an event that I had helped organize - One Billion Rising. After our final dance in front of an elementary school on Abbot Kinney, I gave the balloons I had been carrying all day to the security guard there, who had been our most entertained audience member. I will never forget how touched and excited by this gift he was. I thought how much happiness and hope CODEPINK must have spread over the years if something as seemingly insignificant as pink balloons could bring this much joy. His smile inspired me, and I never wanted to stop.

A few days later, I flew to DC, and my two and a half weeks there went by in what felt like two seconds. I was so busy with actions - darting off to the White House one day, off to the Pakistani embassy the next, and constantly in and out of the Senate Hart Building. I barely had time to think before I found myself dressed up revolutionary-era clothes or a settlement and walking up to Dianne Feinstein and other congress people.

I thrived on this direct action. I was living and breathing the issues, and it was hard to believe that just a month before I had been completely out of the loop. There is nothing more satisfying than driving home after a long day of chanting and marching in the streets, utterly exhausted but incredibly happy because today my voice was heard. 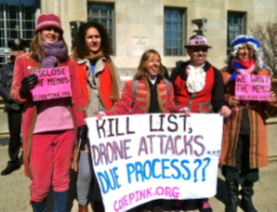 I’m sure I have learned more life lessons and valuable skills working alongside Jodie and Medea during my internship at CODEPINK than I could have learned anywhere else in this short amount of time. Some words of wisdom that really stuck are, “First you educate, then you inspire, then you activate.” This has been my experience at CODEPINK. They not only gave me the best activist’s education I could ask for, inspired me no end, and let me be part of so many awesome actions, but they also gave me the tools to educate, inspire, and activate others. 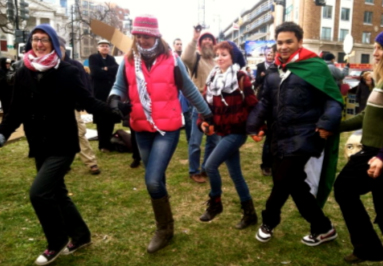 I have met so many strong and amazing people at CODEPINK, many of whom have become role models. As I continue to meet people throughout my life I will tell them all my stories of the exciting protests. I will tell them how fun it was to hold hands with Palestinian college students and dance to debka music in front of the AIPAC meeting. 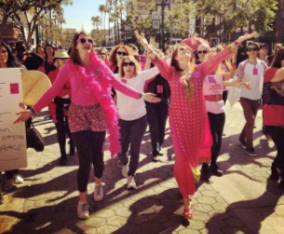 I will tell them what it was like to lie on the floor of Feinstein’s office covered by a bloody sheet, listening to Tighe’s drone impression. I will tell them my love of making visuals and how I would look up from a banner to find that two hours had gone by and my hands were covered in paint. I will talk endlessly about my internship at CODEPINK because it has changed who I am.