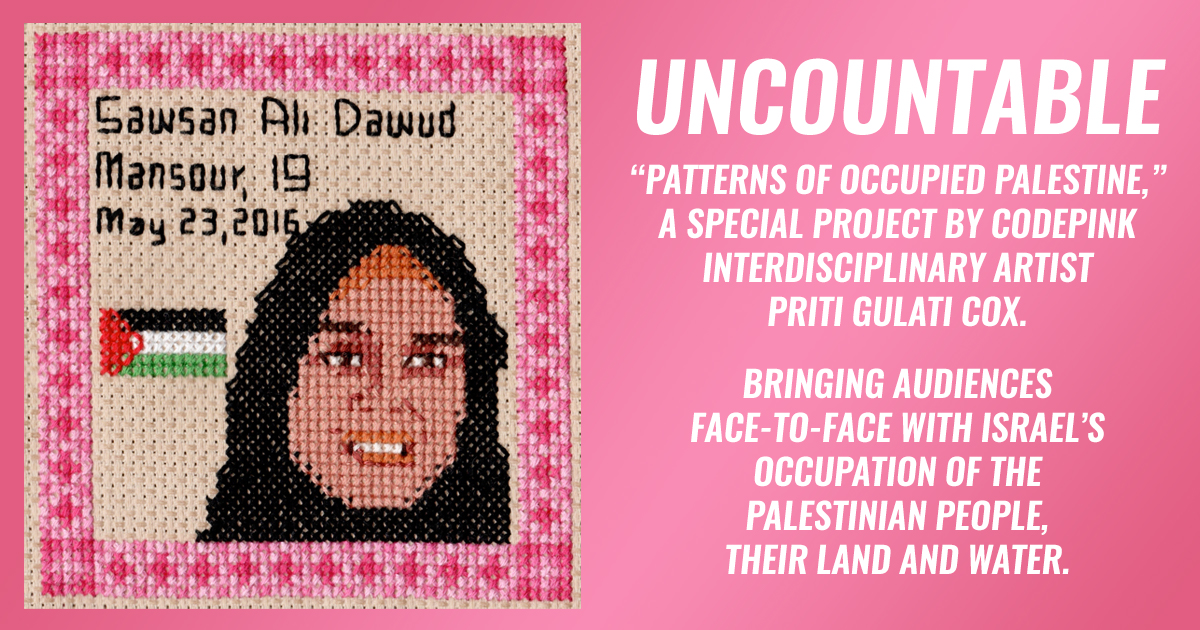 The first segment of this series, Patterns of Occupied Palestine: Part 1 of Uncountable, included a portrait of 18-month-old Malak Shaker Abu Shouqa. She was one of 13 people who were killed on July 31, 2014 when an Israeli F-16 warplane struck their homes. Four of the people killed that day included members of the al-Bayoumi family. 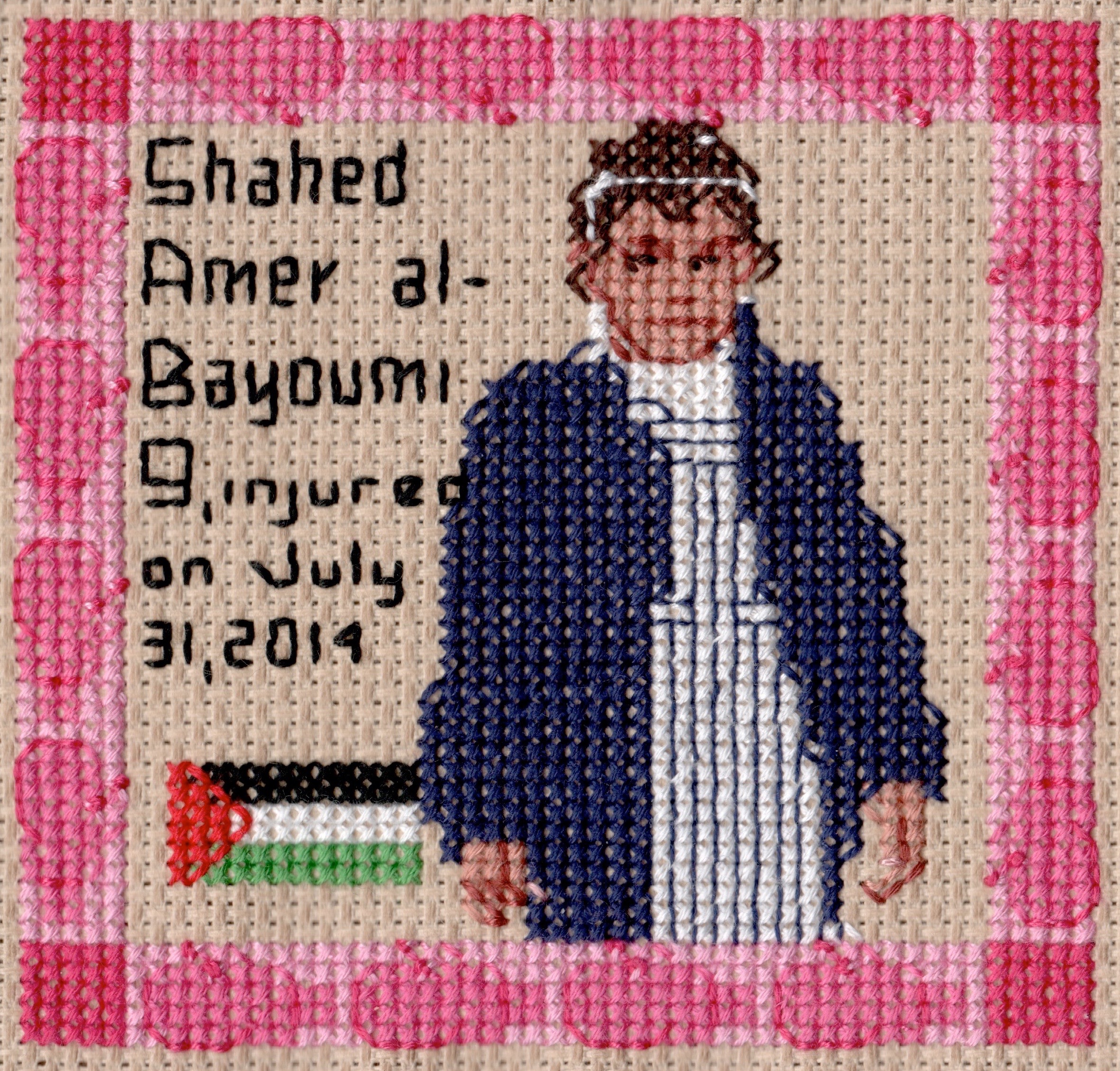 This segment, Part 2, includes 9-year-old, Shahed Amer al-Bayoumi, who survived that attack but was badly injured. According to the multimedia web documentary Obliterated Families, “She now shivers all the time. She was in a coma for 38 days… initially, she could not recognize her family. She cannot hold a pen to write, so sometimes her cousin sits with her at the school to help her write.” Shahed lost her cousin Hassan, and her three sisters Abeer, Aseel, and Hadil in the attack. 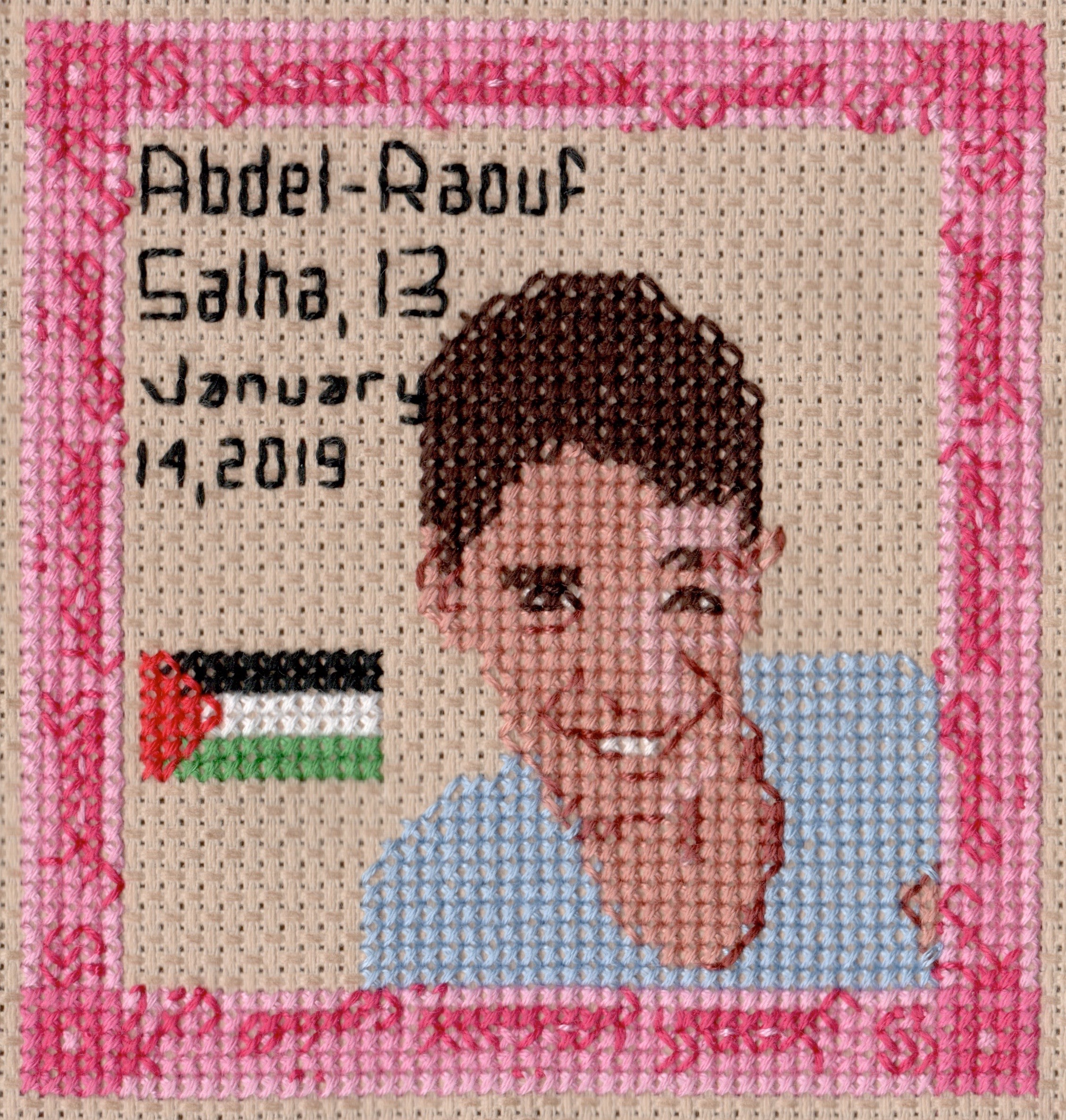 13-year-old Abdel-Raouf Salha, was the first Palestinian child to be killed by occupation forces this year. Abdel was injured while participating in the Great March of Return protests on January 11 in the northern Gaza Strip when he was struck in the head by an Israeli-fired tear gas canister causing severe brain injury. He died two days later in a hospital in Gaza City.

According to Ayed Abu Eqtaish, the Accountability Program Director for Defense for Children International – Palestine(DCIP), “Crowd control weapons such as tear gas canisters can become lethal weapons when fired at children, especially if the point of impact is on a child’s head or torso.” DCIP also said that “a high proportion of the Gaza Strip fatalities, 45, were killed by Israeli forces since the start of Great March of Return protests on March 30, 2018, often in the context of protests or related activities.” 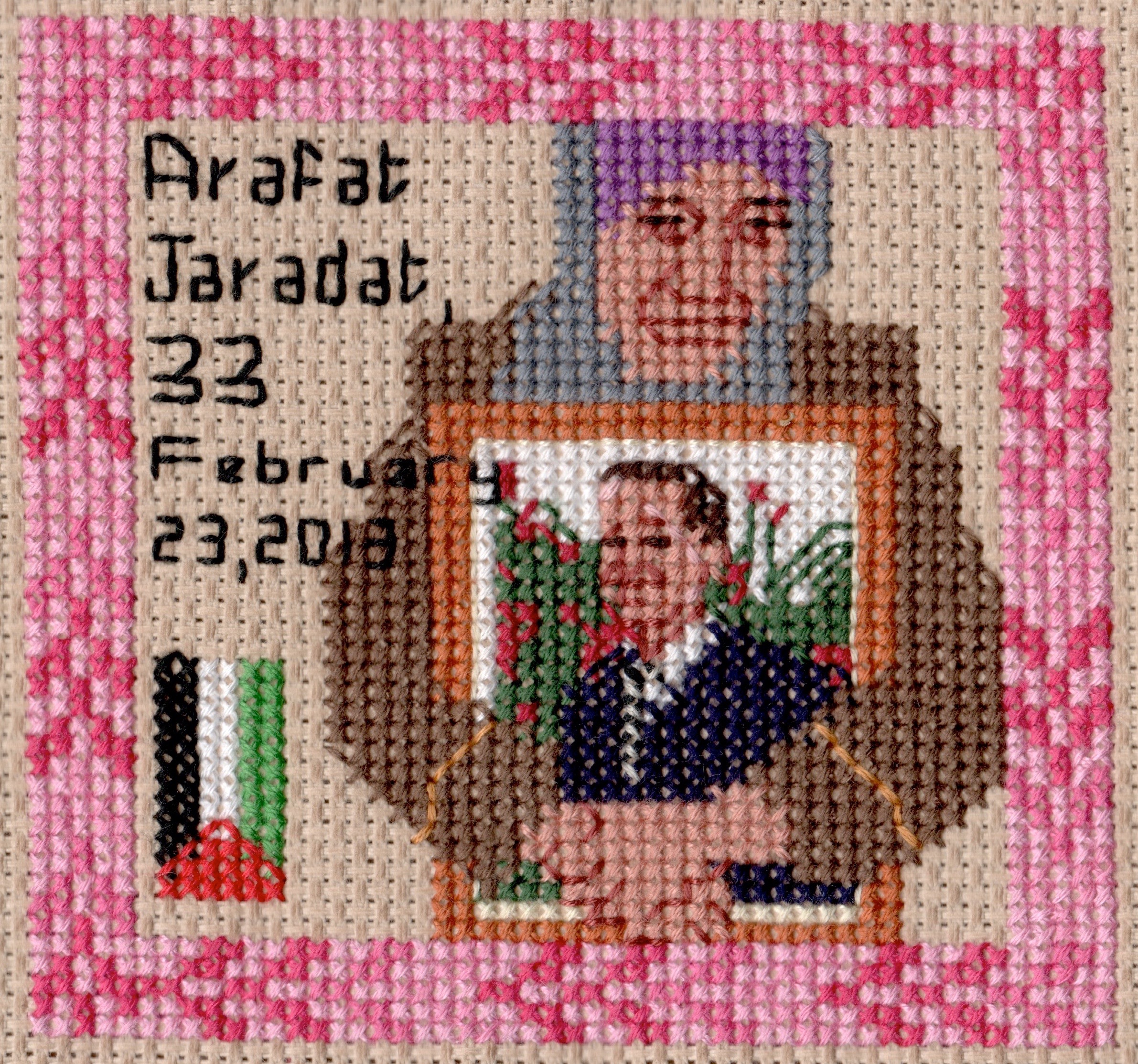 Suspected of throwing stones and a Molotov cocktail at occupation forces, 33-year-old Arafat Jaradat from the occupied West Bank was arrested on February 18, 2013 and locked up in Israel’s Megiddo prison, where he died five days later after being interrogated by the security agency Shin Bet. On February 24, the Palestinians rights group Al-Haq tweeted saying that the “autopsy of #ArafatJaradat confirmed that he didn't die of a heart attack. Body displayed multiple signs of beating.” He was tortured. According to The Electronic Intifada (EI), “Israel has failed to launch a single criminal investigation for torture despite more than 1,000 complaints by victims since 2001.”

Arafat had two children, Yara and Mohammad. His wife Dalal was expecting their third child at the time of his death. According to the prisoner solidarity network Samidoun, she gave birth to a boy on June 30 and named him Arafat, “after his martyred father.” 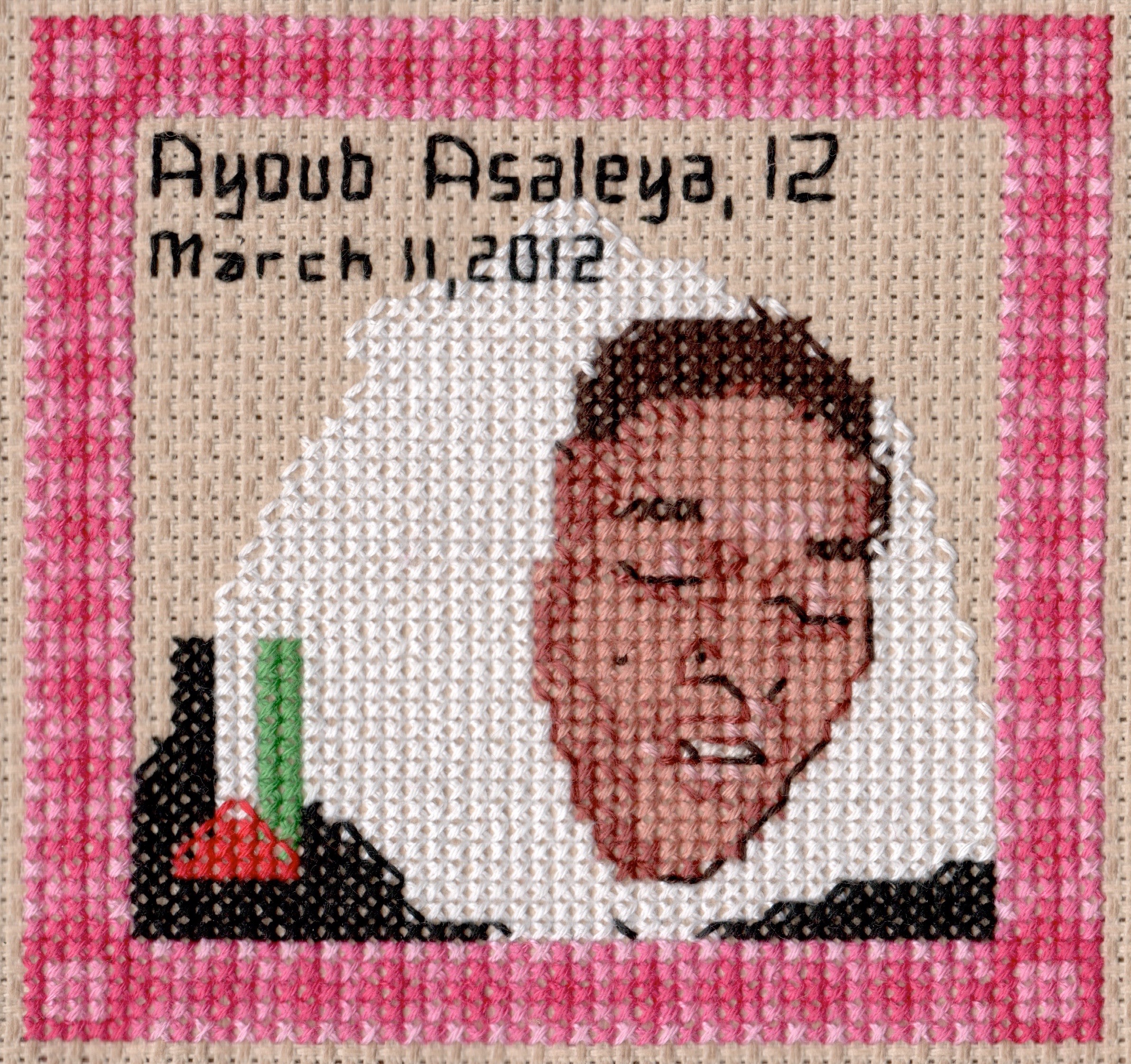 12-year-old Ayoub Asaleya was playing with his cousins when he was killed in an Israeli airstrike in Jabalia refugee camp on March 11, 2012, as cross-border fighting between the Israeli military and Palestinian militants raged on for a third day. Adel Essi,63, was killed by shrapnel from another missile as he was guarding an orchard. According to the New York Times, the attacks had begun “when Israeli air-to-ground missiles killed the leader of the Popular Resistance Committees, Zuhair al-Qissi, and his assistant in Gaza.” The prime minister of Israel, Benjamin Netanyahu boasted, saying, “My instructions are to strike at anyone planning to harm us… The combination of offensive capabilities, defensive capabilities and civilian resilience is a winning combination, and we have it.” 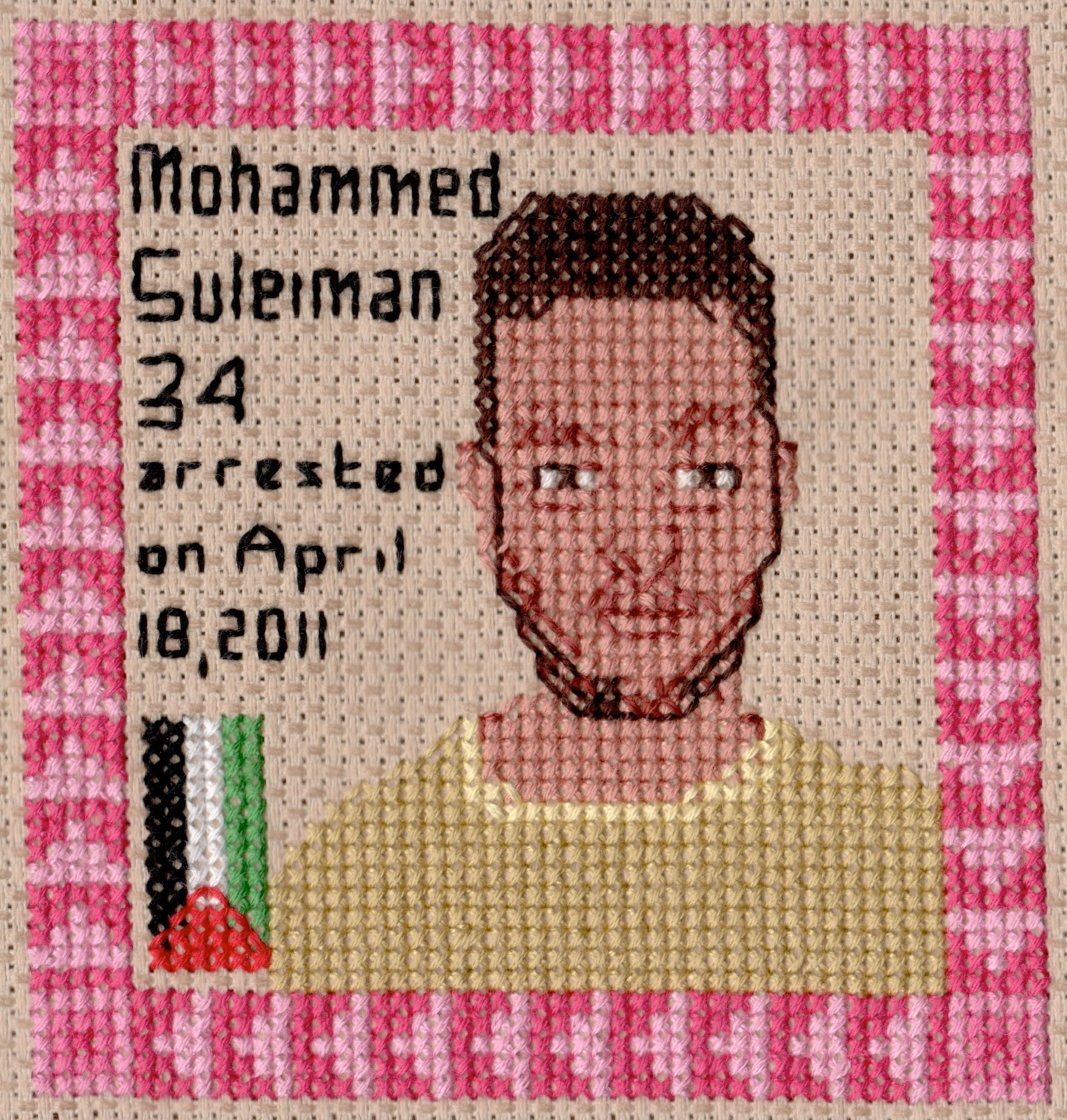 Mohammad Suleiman, was arrested on April 18, 2011. He is 34 years old and suffers from thalassemia and chronic anaemia for which he requires daily medical care, including frequent blood transfusions. As a result of the transfusions, his blood contains high levels of iron, causing a perpetual weakening of his heart muscle for which he has had to undergo a daily routine of intravenously injecting a medication called Desferal for 8 to 10 hours to cleanse his body of some of the excess iron. Since his arrest and subsequent medical neglect, his health has deteriorated rapidly; tests confirm that he has an enlarged heart and liver.

According to the prisoner support group Addameer, Mohammad is currently in administrative detention, “a procedure that allows the Israeli military to hold detainees indefinitely on secret evidence without charging them or allowing them to stand trial… The entire family, except for his 20-year-old sister, is currently forbidden from visiting Mohammed.” In early October of ’11 Mohammed’s wife gave birth to Suleiman, their first child. 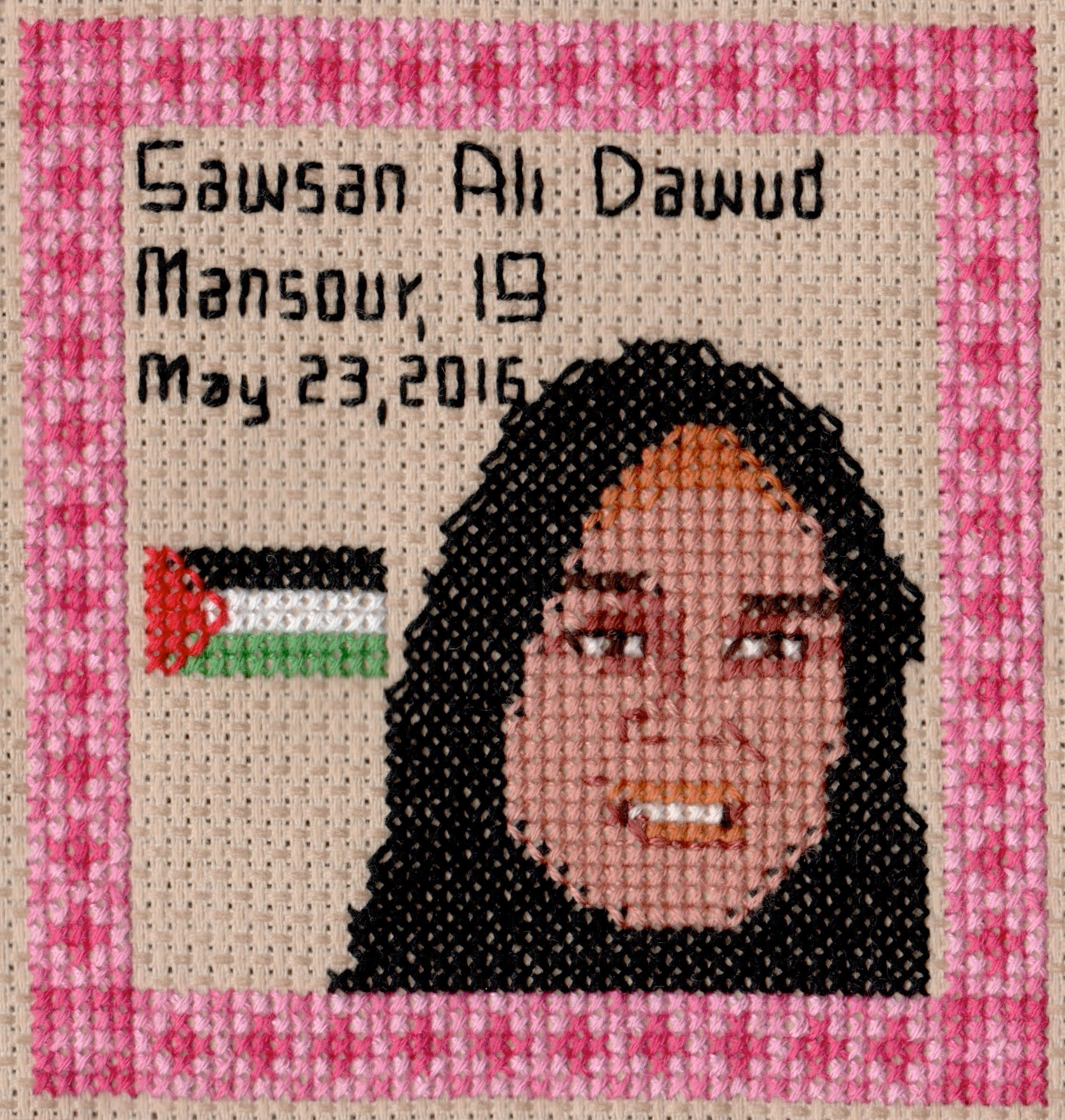 In a new wave of unrest that broke out between Occupation forces and Palestinians in October 2015, 28 Israelis and more than 200 Palestinians were killed, including the latest victim,19-year-old Sawsan Ali Dawud Mansour, who was gunned down near the Ras Biddu checkpoint north of Jerusalem on May 23, 2016. According to Ma’an News Agency (MNA), an Israeli spokesperson claimed that a “female terrorist” allegedly attempted to stab a soldier, when “another officer immediately fired gunshots at the Palestinian teen and ‘neutralized’ her.” No Israelis were reported injured in the incident. 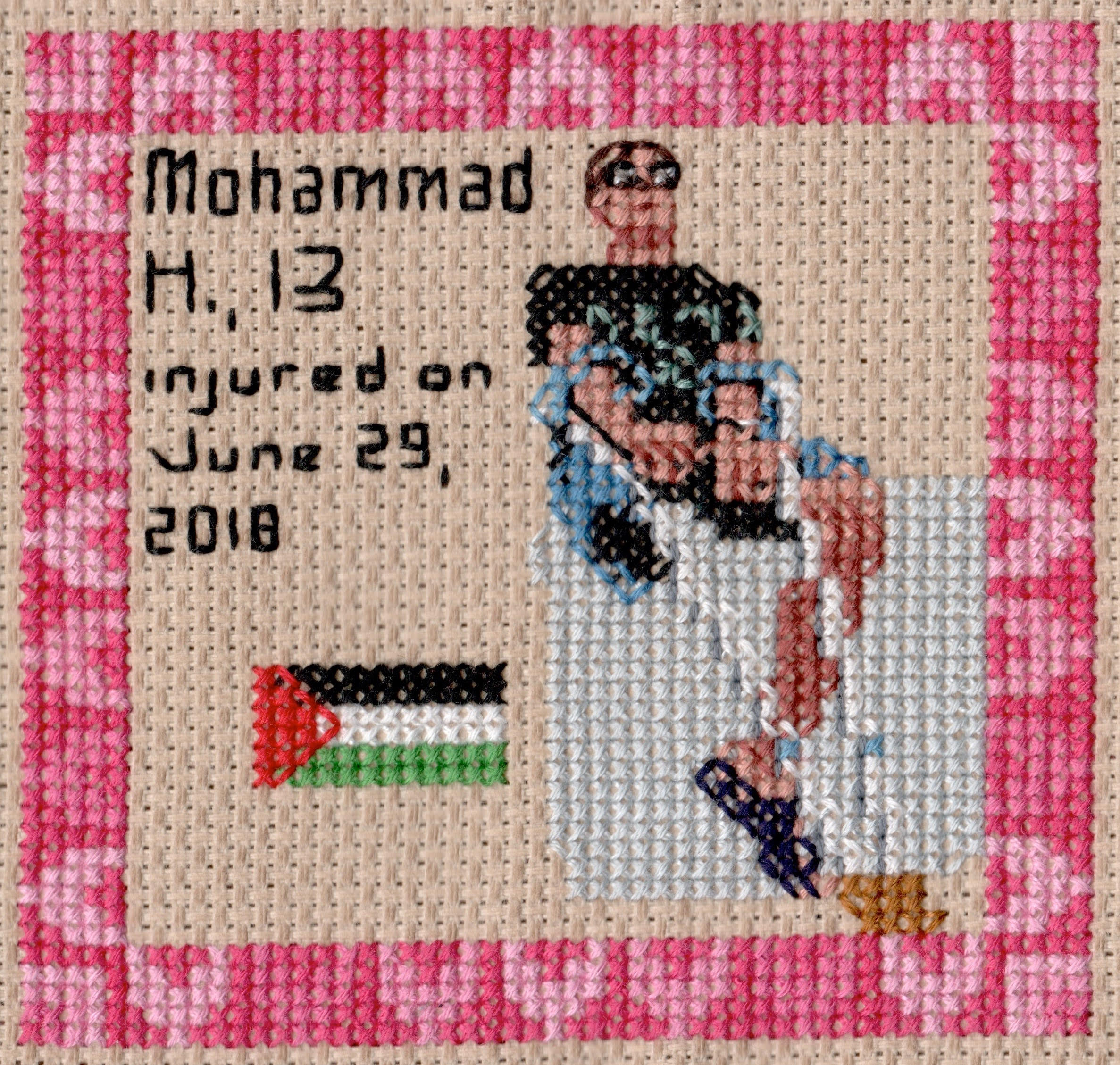 “I used to play soccer and ride my bike but now my life has completely changed… My message to Israel is that I was participating in a peaceful march and they shot me in the leg and now I don’t have a leg.” Those are the words of 13-year-old Mohammad H., who was severely injured on June 29, 2018. According to DCIP, Israeli forces shot him “at around 6:30 p.m., near Jabalia refugee camp in the northern Gaza Strip… He marched toward the fence with a group of other protesters. Mohammad was unarmed and making a ‘victory’ sign with his fingers. Israeli forces fired multiple rounds at the group and one bullet struck Mohammad’s leg.”

In 2018, DCIP “documented 18 cases of Palestinian children who suffered permanent disability as a result of injuries sustained in the context of Great March of Return protests.” 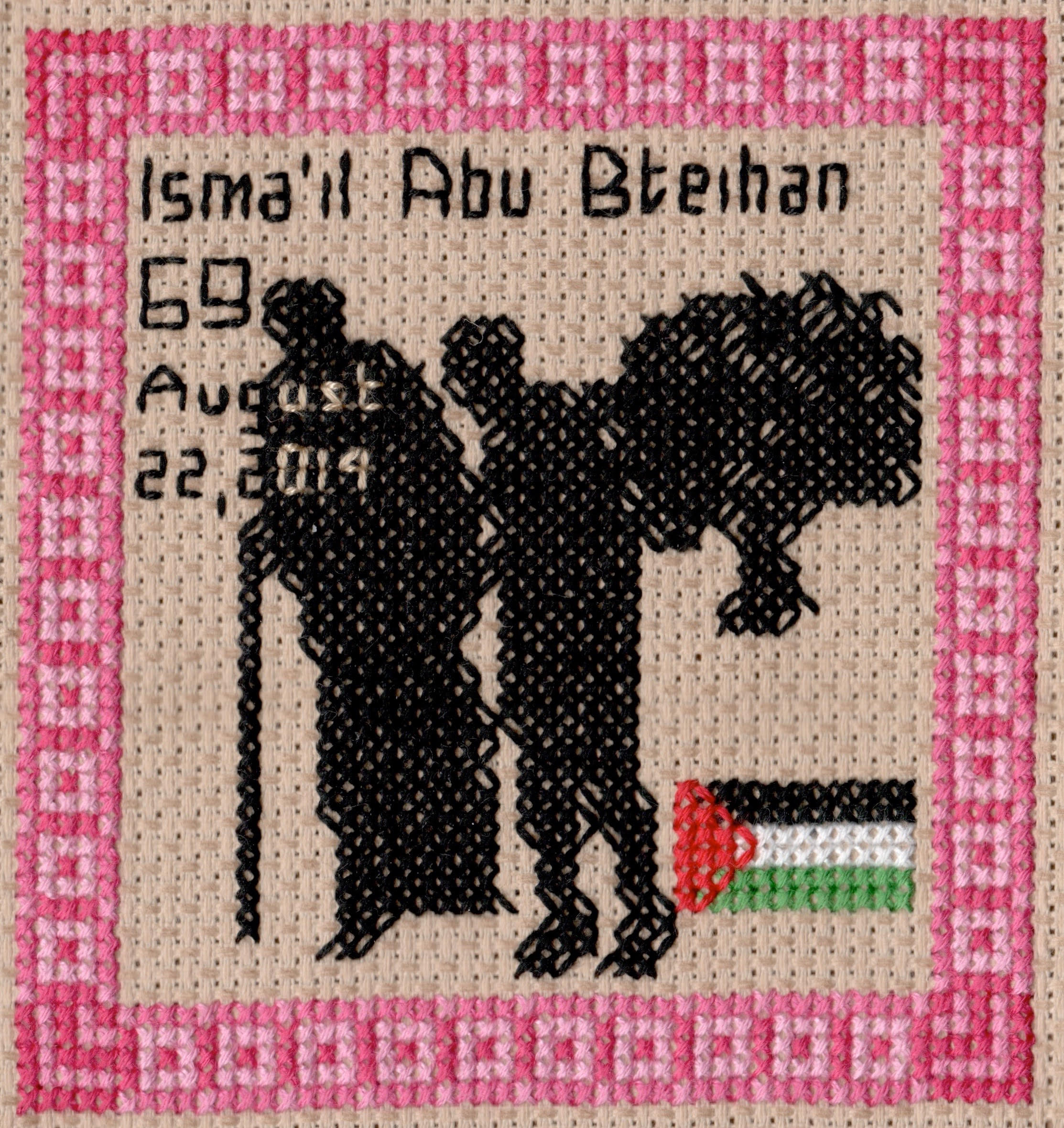 The patterns of Israeli atrocities and collective punishment carried out on the Palestinians, their families and neighbors, their homes and infrastructure can clearly be seen in the summer of 2014 and the 51-day onslaught of explosives that rained down on the Gaza Strip. The explosive force that killed more than 520 children, including Malak Abu Shouqa and Shahed al-Bayoumi’s three sisters and cousin and left her constantly shivering with fear was “roughly equivalent to that of the Hiroshima atomic bomb,” according to EI.

Just four days before the August 26 ceasefire agreement that ended the assault, Isma’il Muslem Hamad Abu Bteihan, a 69-year-old resident of a-Zawaydah, Deir al-Balah district was killed in a missile attack. According to B’Tselem, he was “killed while sitting under the shade of a tree opposite his home. Four hours later his home was bombarded and completely destroyed.” 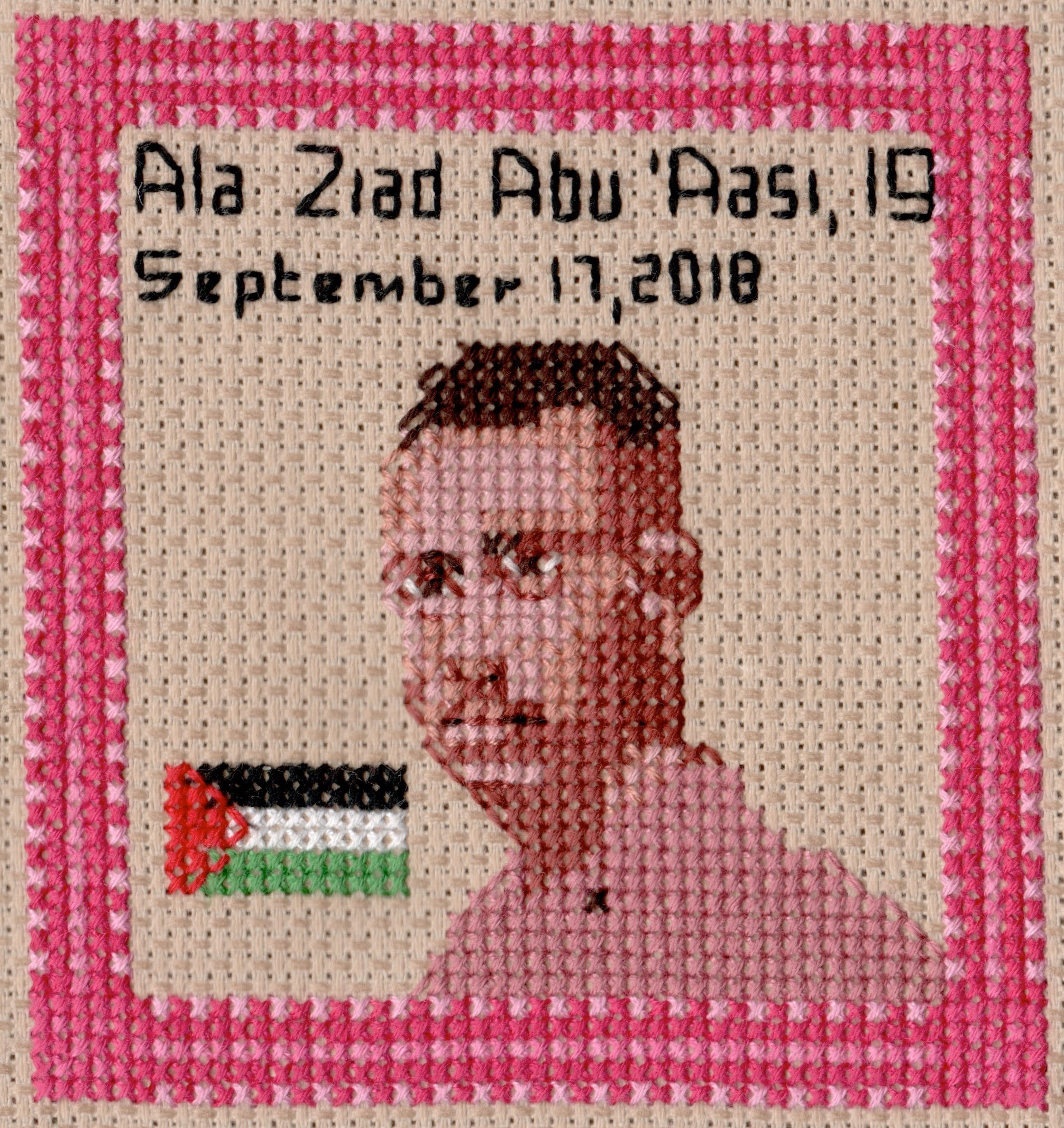 In addition to Malak Shaker Abu Shouqa, Part 1 of Patterns of Occupied Palestinefeatured 16-year-old Naji Jamil Abu ‘Aasi, who was killed on the 17th of September, 2018 by an Israeli missile along with his cousin. According to Al Mezan Center for Human Rights, “At 12:50 am the next day… Palestinian Red Crescent Society medical teams found the bodies of two civilian-dressed persons. Both had shrapnel injuries on various parts of their bodies and one of them was torn to pieces. The two bodies were taken to Nasser Hospital in Khan Younis, where they were identified as Naji Abu ‘Asi, 16, and Alaa’ Abu ‘Asi, 19 [featured here, in part 2]—both residents of Al-Zanna area in Bani Sohaila town in eastern Khan Younis.” 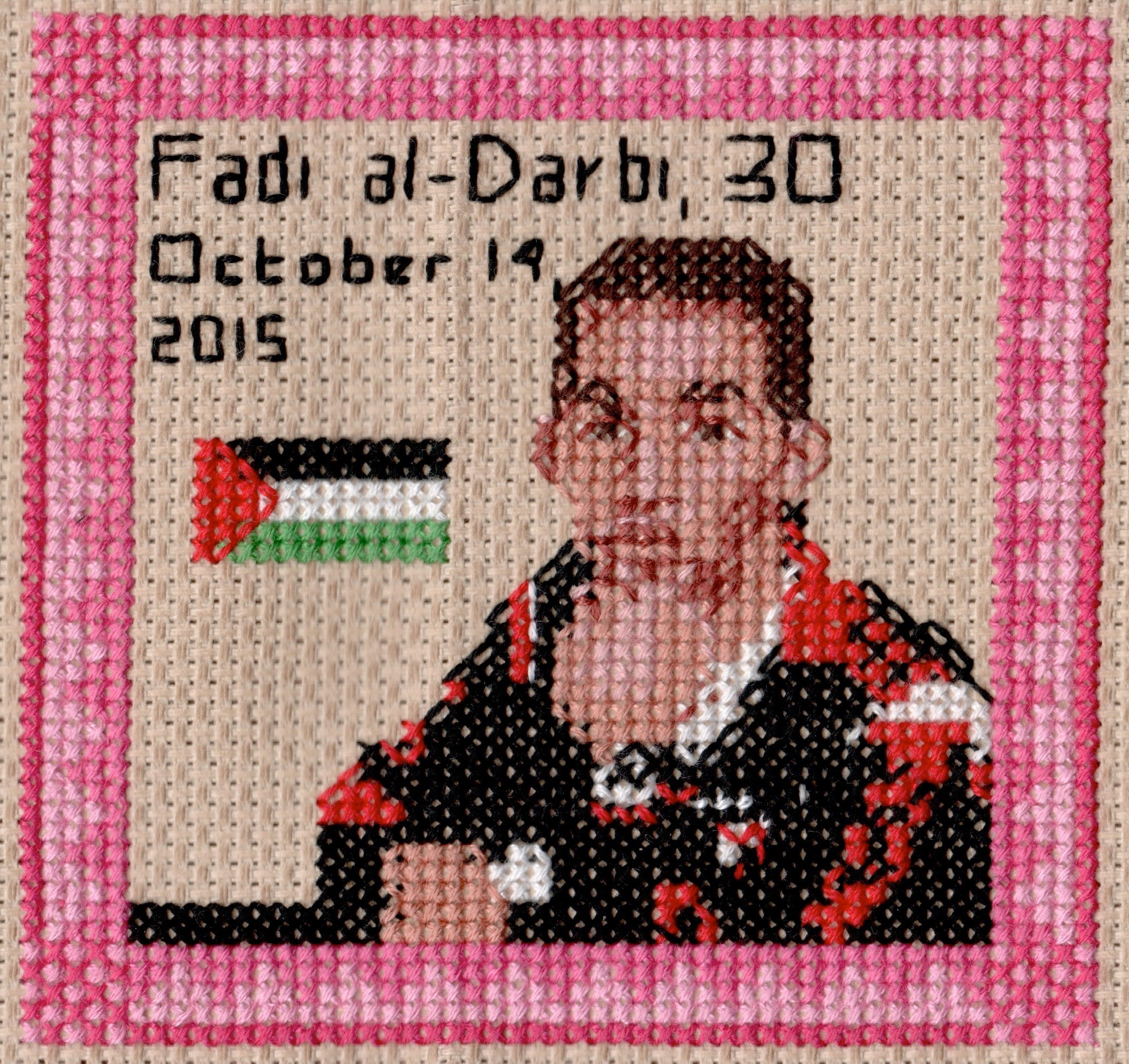 A 30-year-old Palestinian resident of Jenin named Fadi al-Darbidied on October 14, 2015 after suffering “medical negligence by the Israeli Prison Service.” Fadi had been detained by Israeli forces back in 2006 and sentenced to 16 years in jail. The Palestinian Prisoner's Society said in a statement “that he suffered bleeding in his abdomen two years ago, but was left in solitary confinement, without medical treatment.” 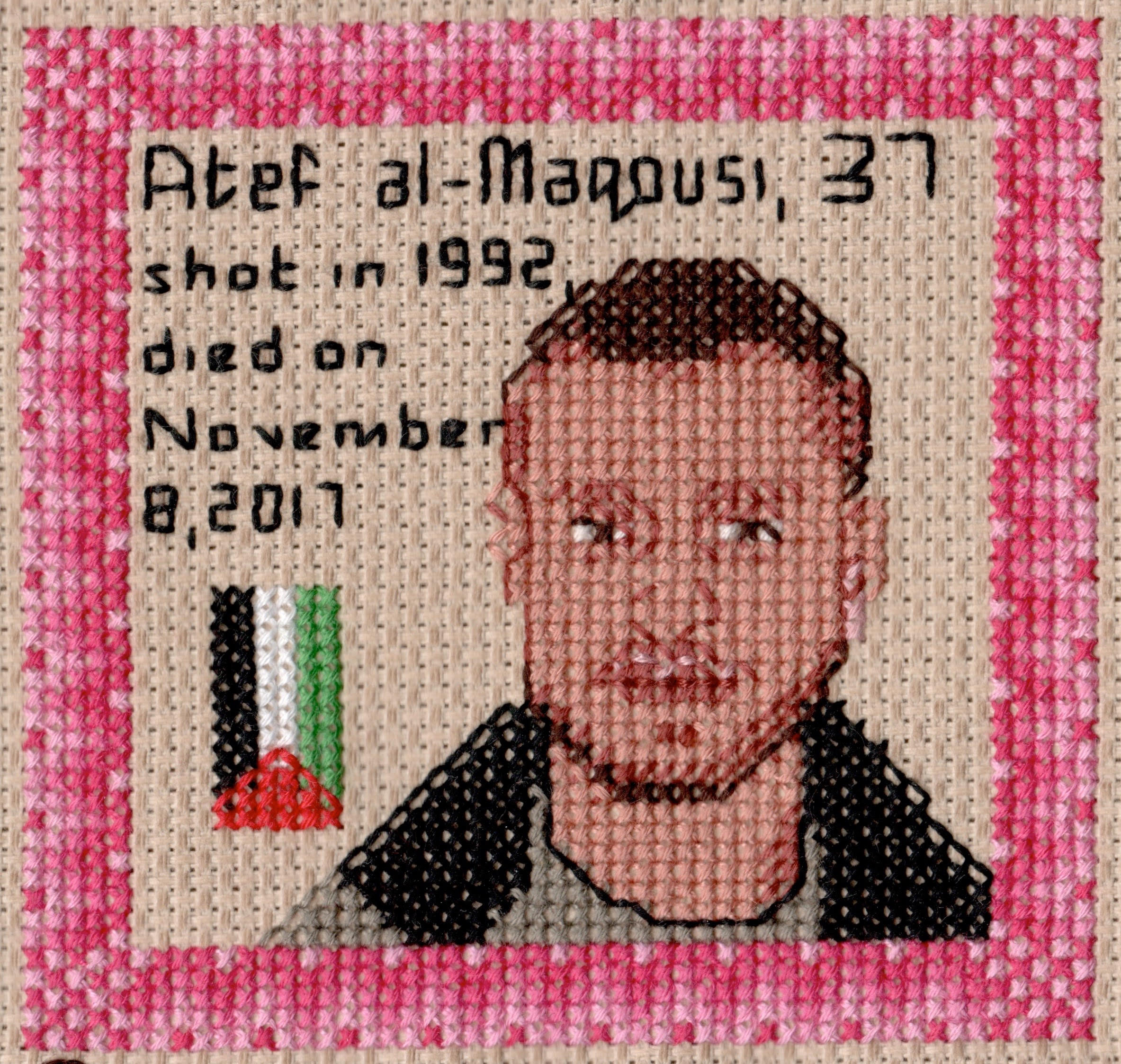 37-year-old Atef al-Maqousi from Jabalia refugee camp in northern Gaza died on November 8, 2107, after living in a quadriplegic state for 25 years. According to the media center IMEMC, he was shot in the spine by Israeli soldiers in 1992 and as a result suffered ongoing infections and other complications tthat eventually led to his death.

“At 11:27 am on 27 December 2008, Gaza was bombarded by Israeli warplanes. Instead of the anticipated school bell, the children heard the horrifying sound of bombs.” That’s when Operation Cast Lead began. According to the EI “Israel used its air force, navy, infantry and artillery against a population that already had a long experience of being under military occupation and, more recently, under siege.” 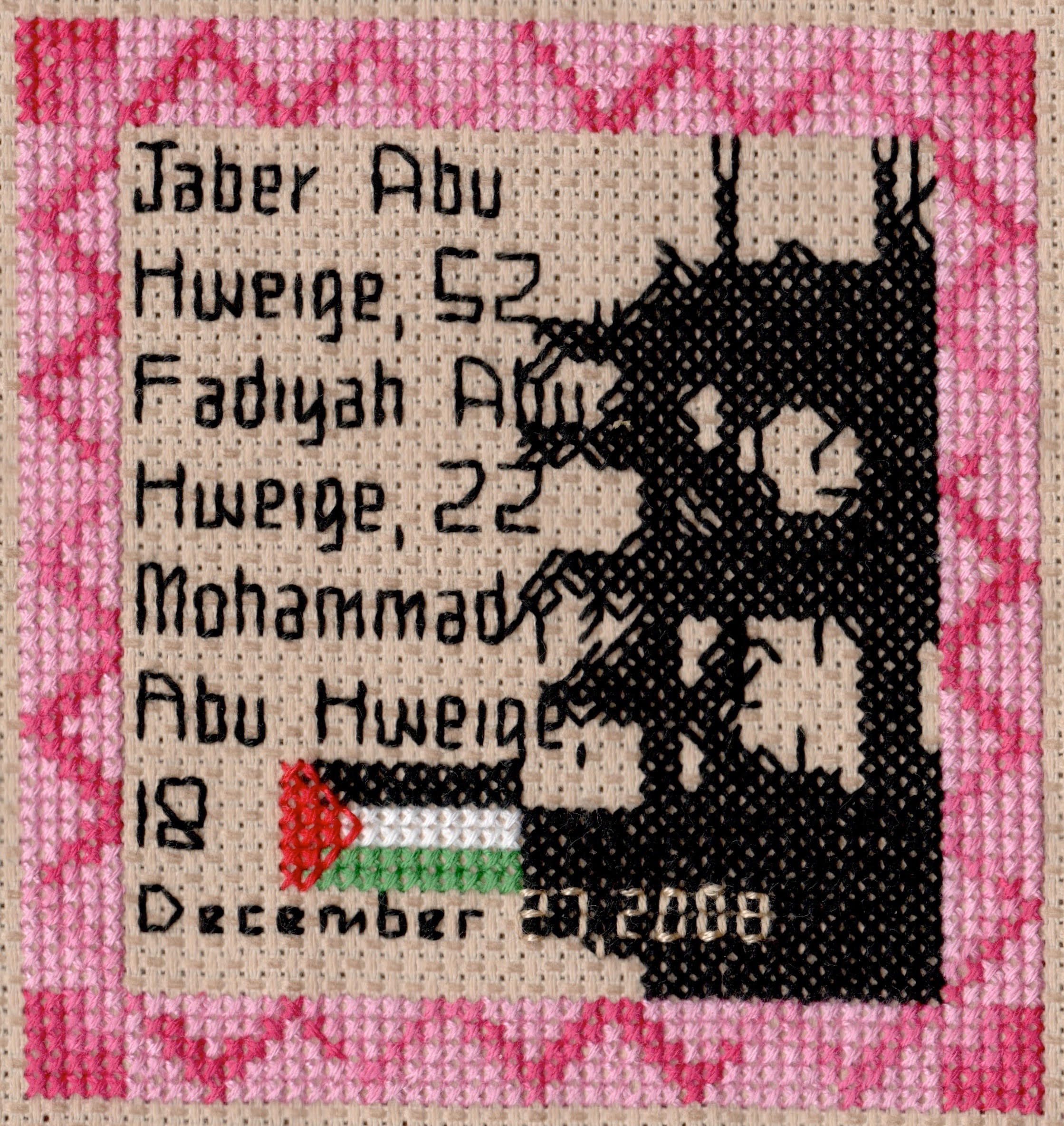 This following testimonyis of Jaber Abu Abu Hweij, a resident of Gaza City:

“I lived with my parents and brothers and sisters in the Tufah neighborhood in Gaza City. Our house is between the police building and the al-Mahata mosque. On Saturday, 27.12. 08, while I was at work, one of my neighbors called me and told me to come home quickly.

I got home and was shocked by what I saw. The house had been hit by an explosion and was a pile of rubble. Where the house had been there was a big hole. There were dozens of people trying to get my family out of the ruins, but they only managed to get some of them out alive.

My father, Jaber Abu Hweij, 52, my sister, Fadia, 22, and my brother Muhammad, 18, were killed in the bombing. Many other family members were injured.

The neighbors told me the house had been hit three times, one right after the other. Some of my family was hurt in the first strike and while others tried to help them, the house was hit again and others were injured. It happened so quickly there was no time to flee.

I keep seeing my sister Fadia in my mind. She was the last one I saw that morning when I left for work. She is the one who woke me for morning prayers and to go to work. Her voice still echoes in my ears….

Our family has fallen apart. Some [have] been killed and others are hospitalized. We lost our home and all our possessions: all our mementos, our dreams, our stories, our furniture, everything is under the ruins. The important thing now is for me to take care of my family that is still alive. I am particularly taking care of my brother Ahmad, who is still in intensive care.”

I would like to thank Obliterated Families, DCIP, The EI, Samidoun, ADDAMEER, MNA, B’Tselem, Al Mezan, and IMEMCfor providing valuable material for this project.