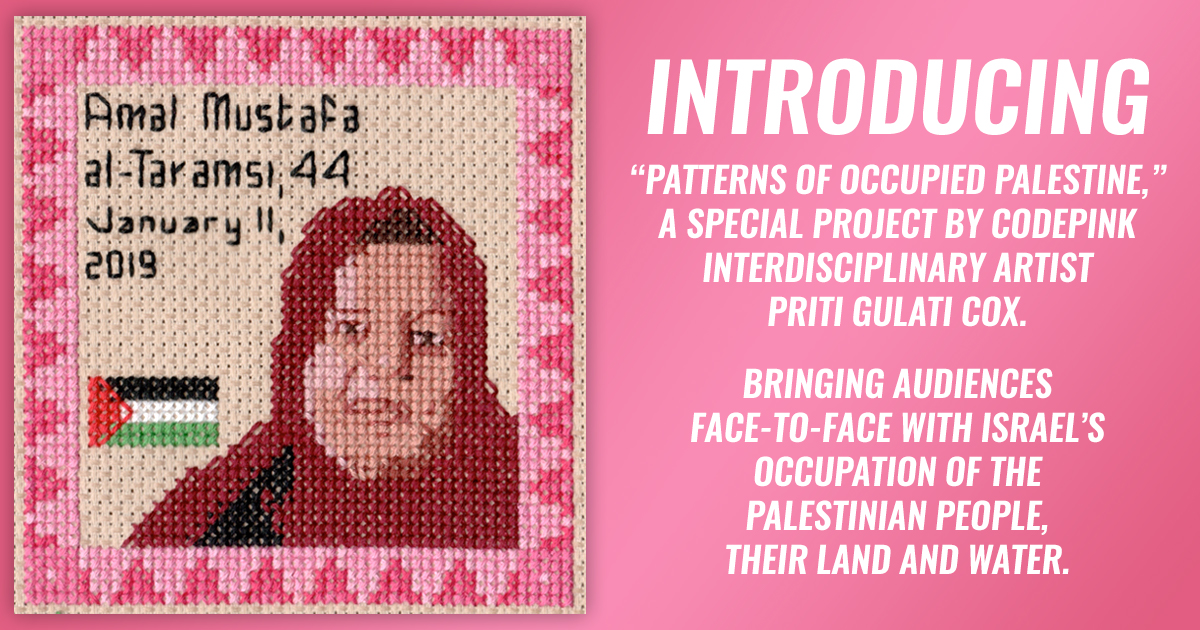 There is no one poster child who embodies the struggle of the Palestinian people living in the shadow of Israeli settlers and military occupation. Every Palestinian child, woman, and man will tell you intricate stories of what life and death is like under the perennial burden of occupation, and what that means for the land beneath their feet, their usurped rivers, their beloved farmers and the artisans, etc.

Each pattern of occupied Palestine tells its own story. As part of a lifelong project, I will be embroidering images of hundreds of Palestinians, deceased and living. Each of the embroidered portraits to come has a border inspired by Tatreez— a traditional Palestinian embroidery-style, and by the occupied territories’ natural, threatened landscape. Each bordered portrait is also a statement against the ugly and violent apartheid border wall.

Below are the first twelve portraits of occupation in this open-ended series: 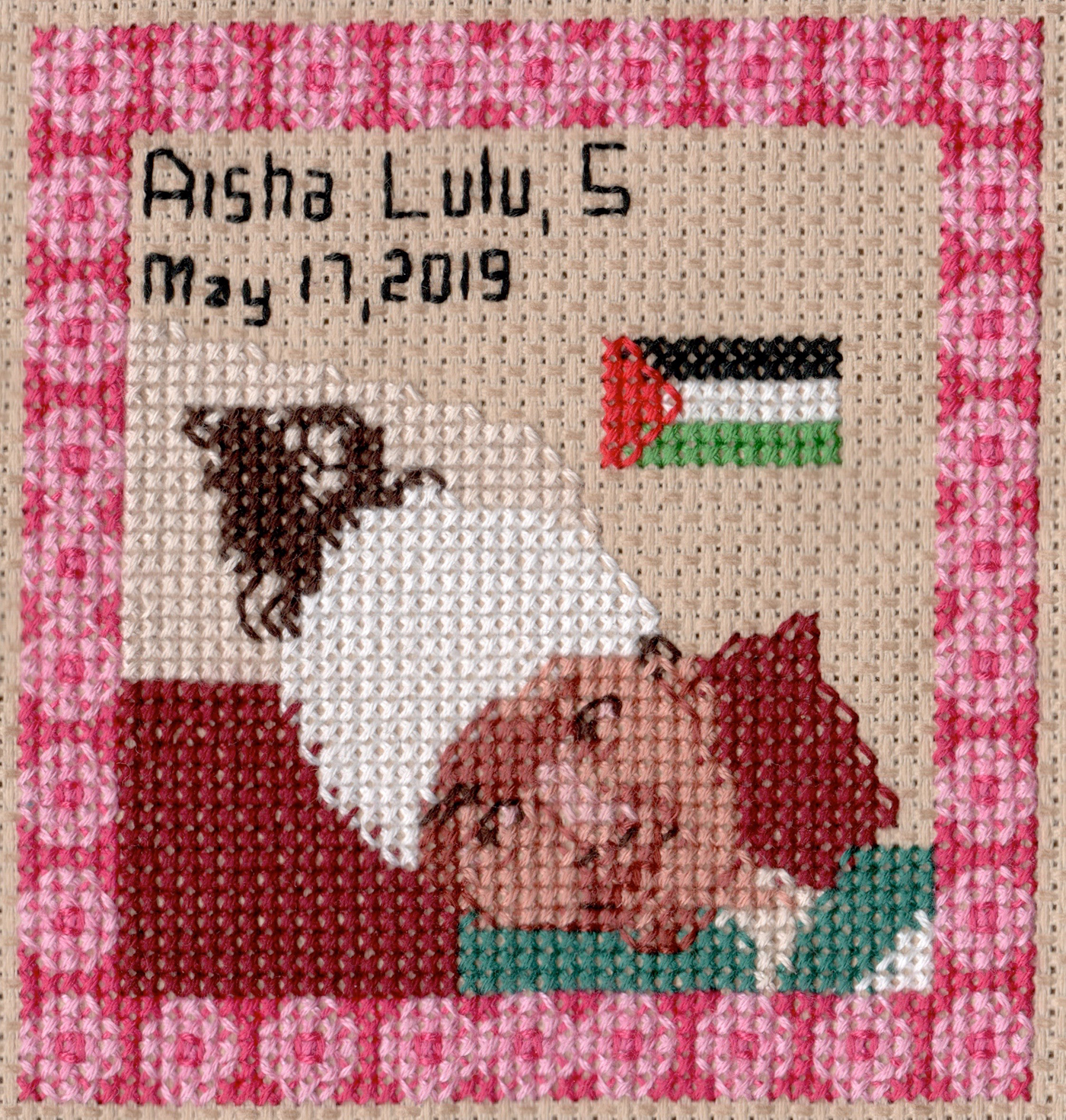 “My heart broke every day my daughter was away… Why does Israel treat us like this? We are not affiliated to any political faction, we are just normal people,” says Muna, whose 5-year-old daughter Aisha Lulu of the Bureij Refugee Camp in the central Gaza Strip was one of the latest casualties of the Israeli occupation. Diagnosed with brain cancer in April, Aisha died on May 17 in a Gaza hospital. Prior to this, she spent a month alone in a hospital bed in Jerusalem, crying for her family, who were denied permits by the Israeli military to accompany her. 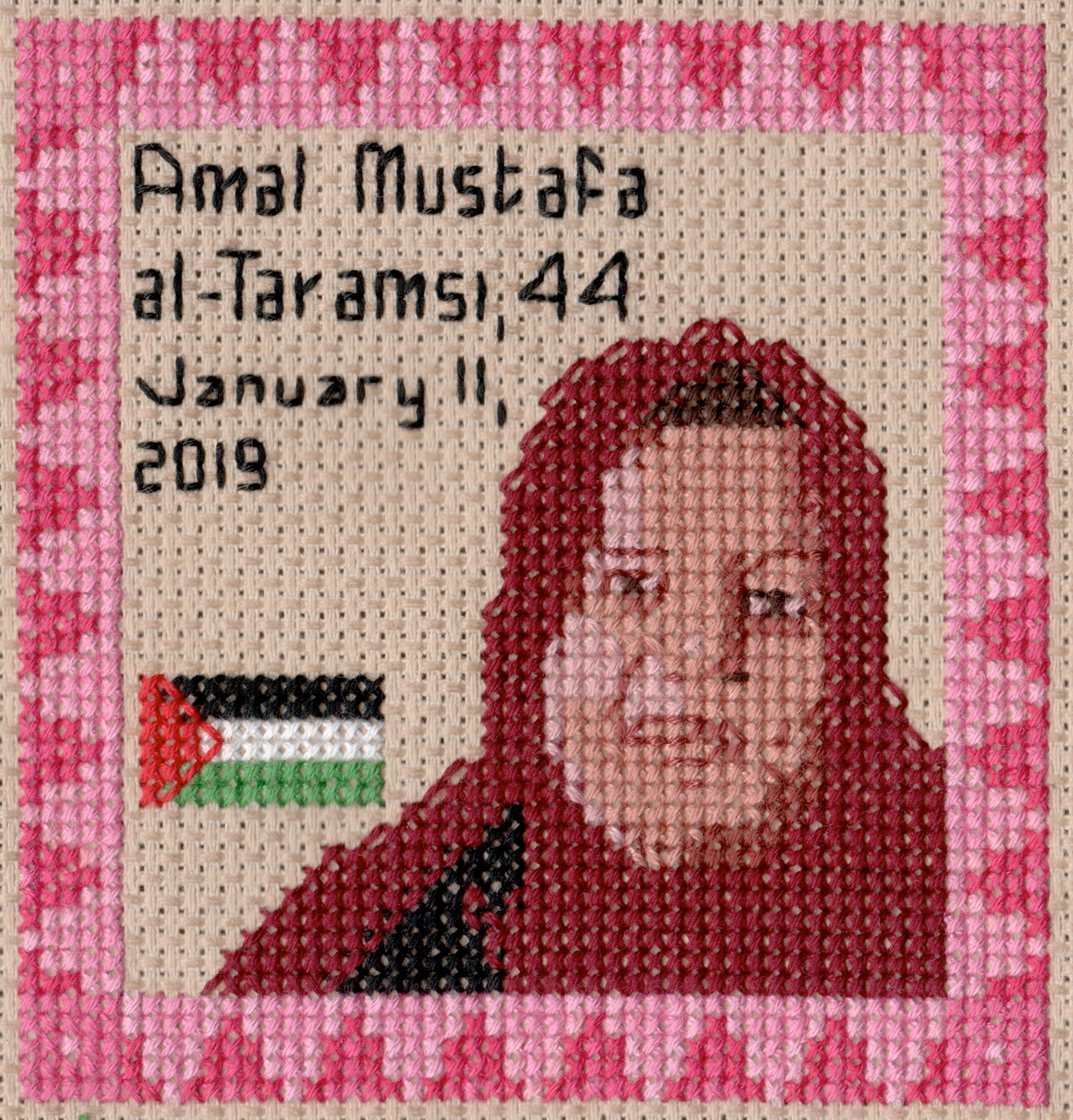 The first Palestinian to be killed by Israeli occupation forces this year was a 44-year-old resident of the Shaikh Radwan neighborhood of north Gaza City, Amal Al-Taramsi, who was shot in the head during protests in the occupied Gaza Strip on Friday, January 11, 2019. 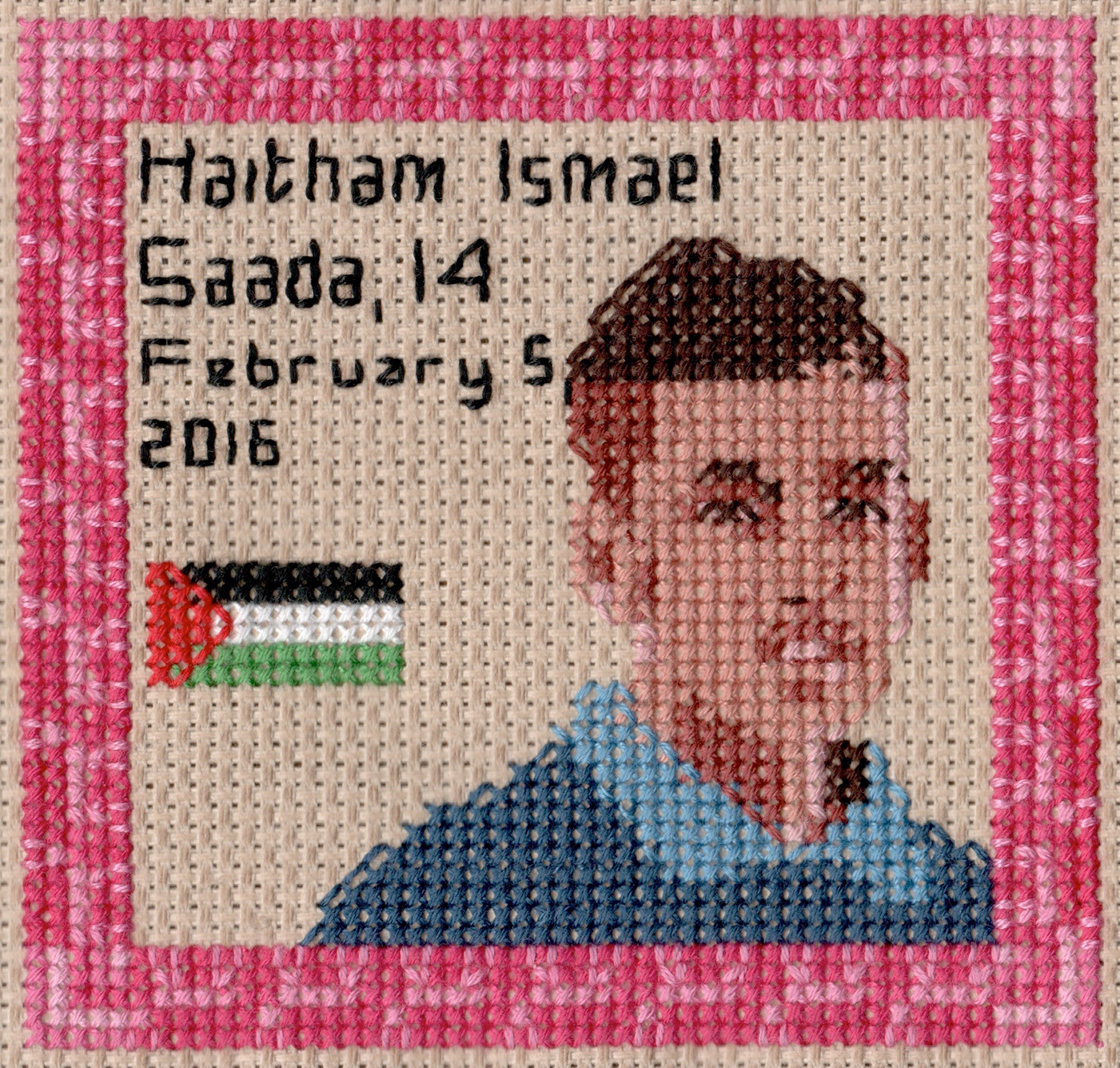 “Haitham was not yet 15 when he died. His average grade in school this year was 87. In the memorial photos he wears a dark kaffiyeh on his head. He was the firstborn child and only son of his parents; there are three younger sisters. His father, Ismail, 43, a construction worker in Kiryat Gat, looks as though he has not yet absorbed what happened. A crooked smile occasionally crosses his lips as he recounts the events of his Black Friday.” Ismail’s son, 14-year-old Haitham Saada was hit by two Israeli bullets on February 5, 2016. The IDF accused him of getting ready to throw a Molotov cocktail at the soldiers, and so they fired and killed him. 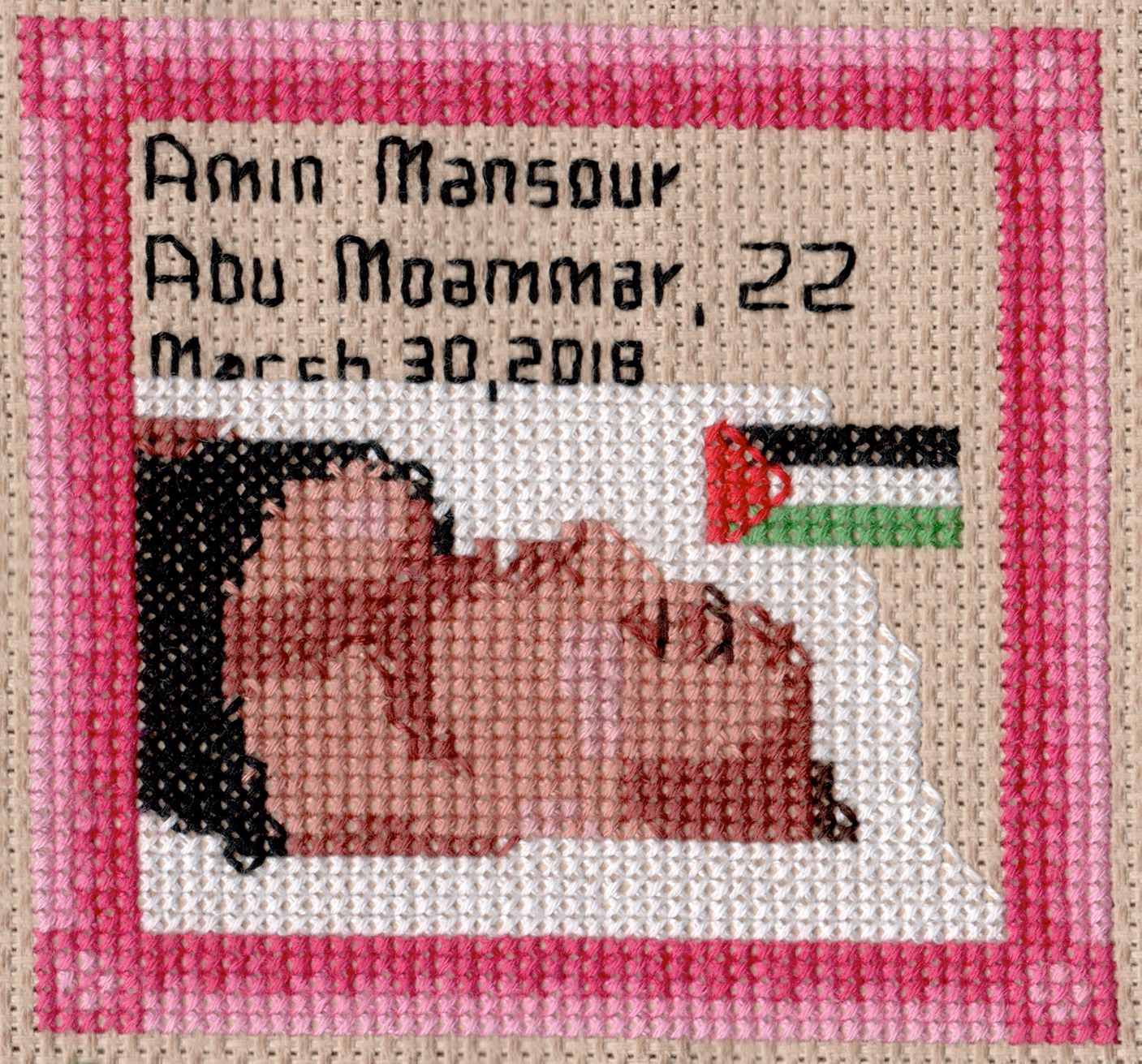 On March 30, 2018, during the Land Day protests along the Gaza-Israel boundary, more than 1,400 Palestinians were wounded by live ammunition and rubber-coated steel bullets, and 16 were killed by Israeli occupation forces. One of the dead was 22-year-old Amin Mansour Abu Moammarfrom Rafah, in the southern Gaza strip. 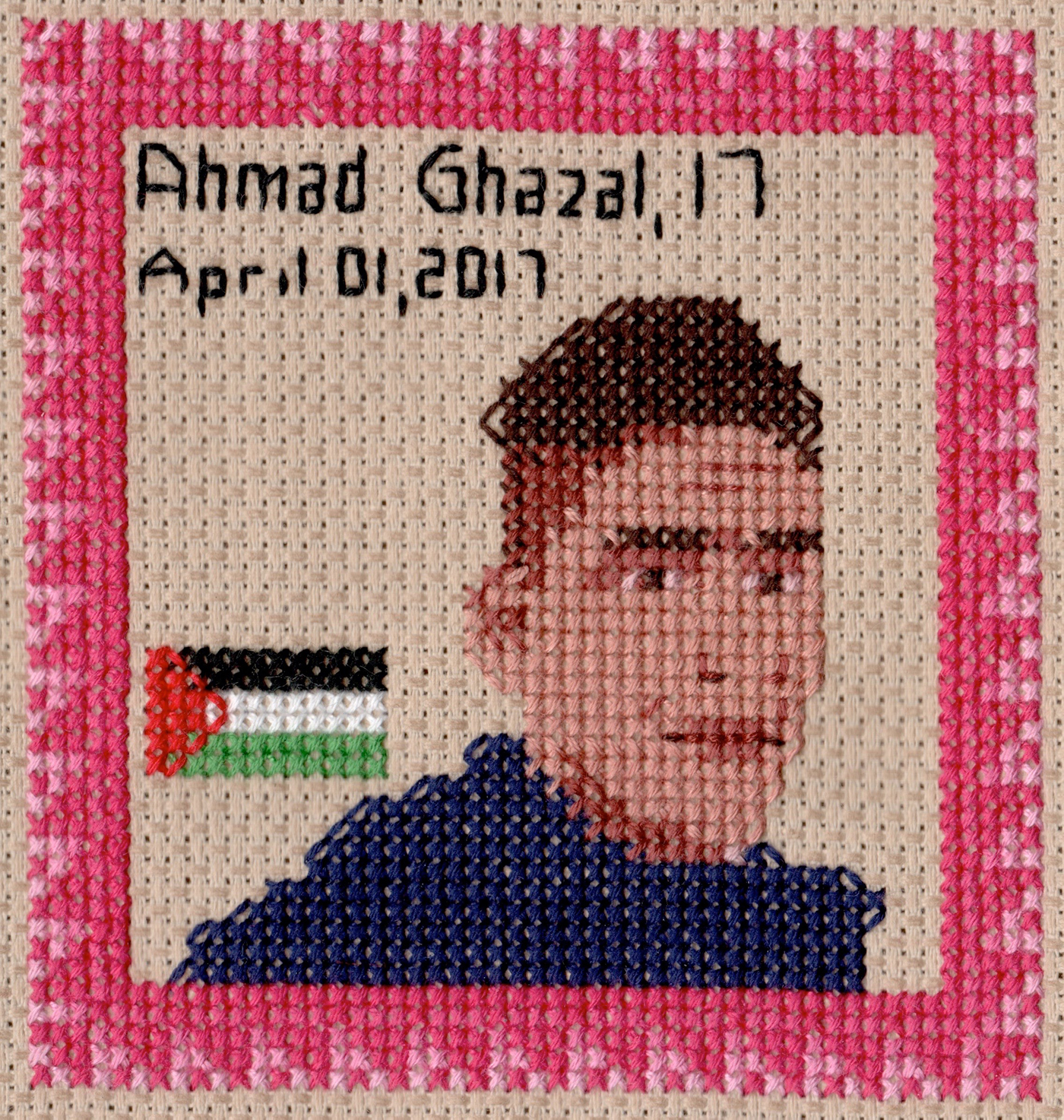 17-year-old Ahmad Ghazal from the Ras Al-’Ain neighborhood of northern occupied West Bank, was shot and killed after he stabbed and wounded  two Israeli men in the Old City of Jerusalem on April 1, 2017. The Accountability Program Director for Defense for Children International - Palestine, Ayed Abu Eqtaish, said, “Israeli forces now appear to routinely resort to the use of intentional lethal force in situations not justified by International norms, which in some incidents amount to extrajudicial killings.” 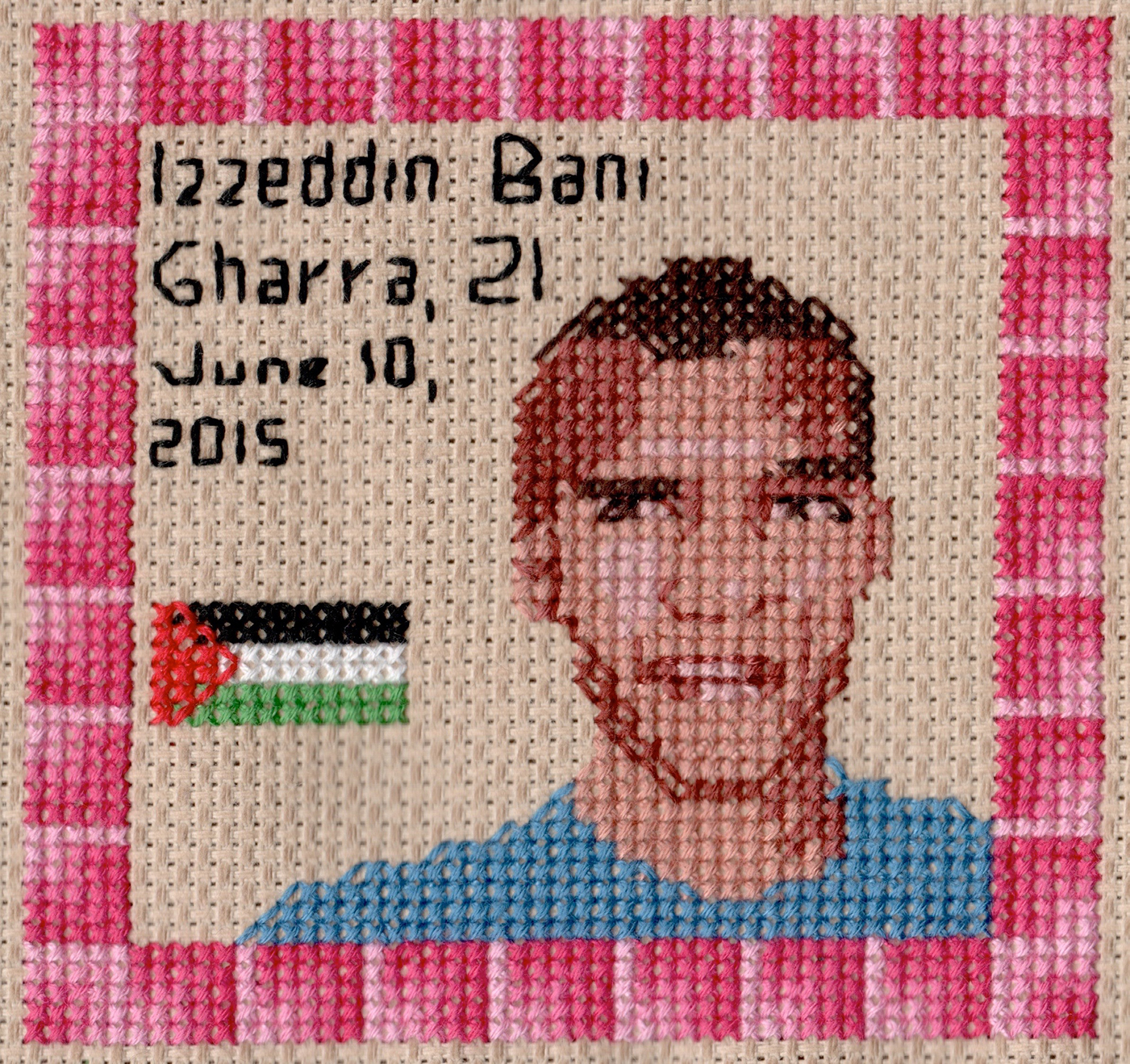 21-year-old Izzeddin Bani Gharra was one of almost 200 Palestinians killed by occupation forces in the occupied territories in 2015. He was shot and killed during an Israeli arrest raid on June 10, 2015. “I lost everything after Izz was killed, it was a shock, my son Izz loves life and he loves Palestine. Israel killed him in cold blood,” Bani Gharra’s mother told Ma’an News Agency. 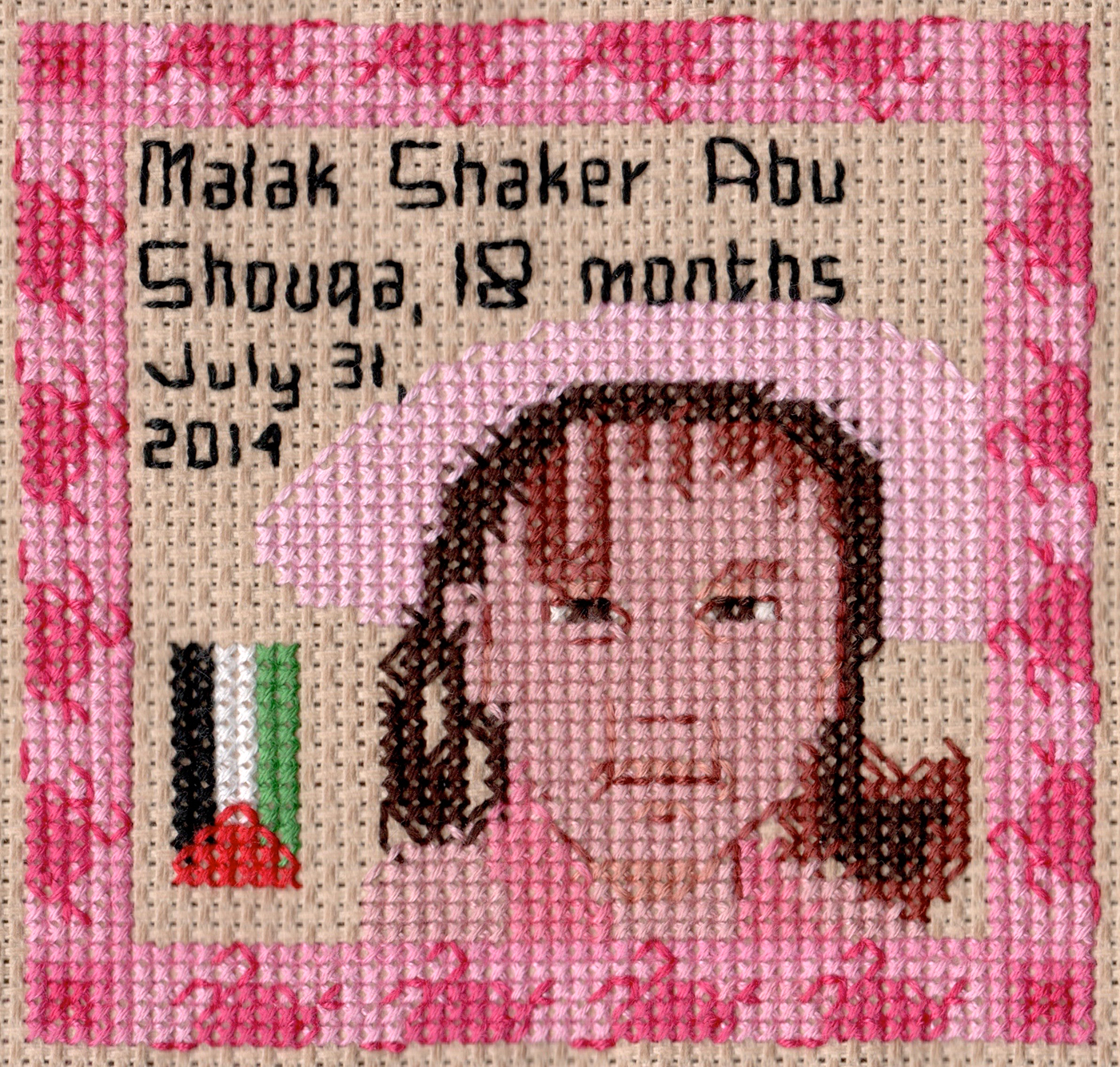 Between July 7 and August 26, 2014 the besieged Gaza strip was bombarded  by Israeli explosives, killing more than 2,130 Palestinians. 18-month-old Malak Shaker Abu Shouqa lived in the Al Nuseirat refugee camp, which is home to more than 80,000refugees, and is located in the middle of the Gaza strip. On July 31, she, along with 12 other Palestinians were killed when an Israeli F-16 warplane struck their homes. Two of the others killed were her relatives. 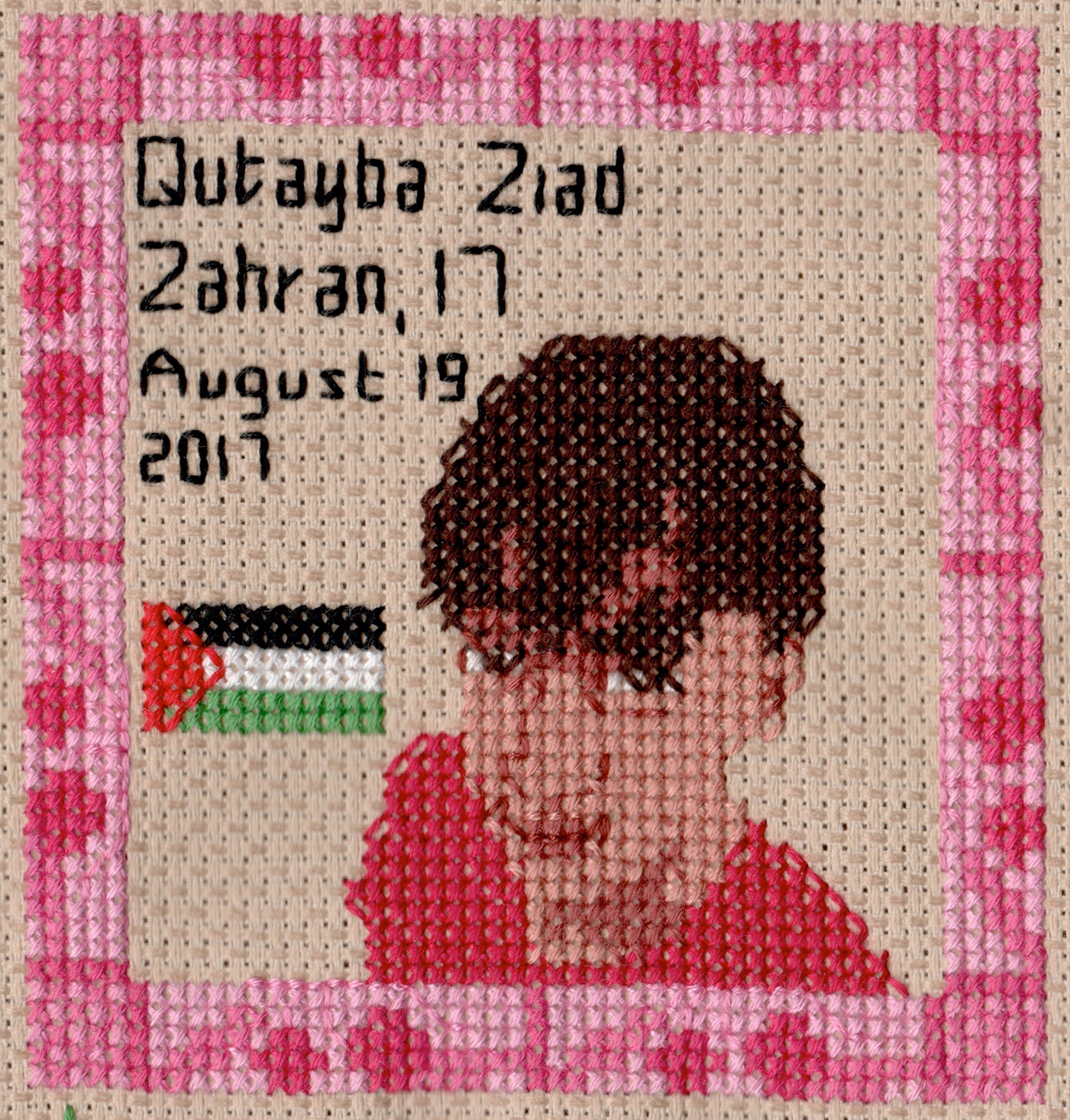 The Israeli border police continued to fire into 17-year-old Qutayba Ziad Zahran's body after he fell on the ground at the Zaatara military checkpoint in northern occupied West Bank. The Israeli authorities alleged that the teenager attempted to carry out a knife attack on Israeli forces, but in fact a soldier was hurt in a friendly fire incident. Hundreds attended Zahran’s funeral procession on September 9, 2017, 20 days after the incident. Zahran's father learned of his son's death through local news and Facebook. According to Ma’an News Agency “Israel often delays the delivery of slain Palestinian bodies to their families in the occupied Palestinian territory, and imposes strict conditions on funerals, alleging that funerals of Palestinians killed by Israeli forces leads to ‘incitement.’” 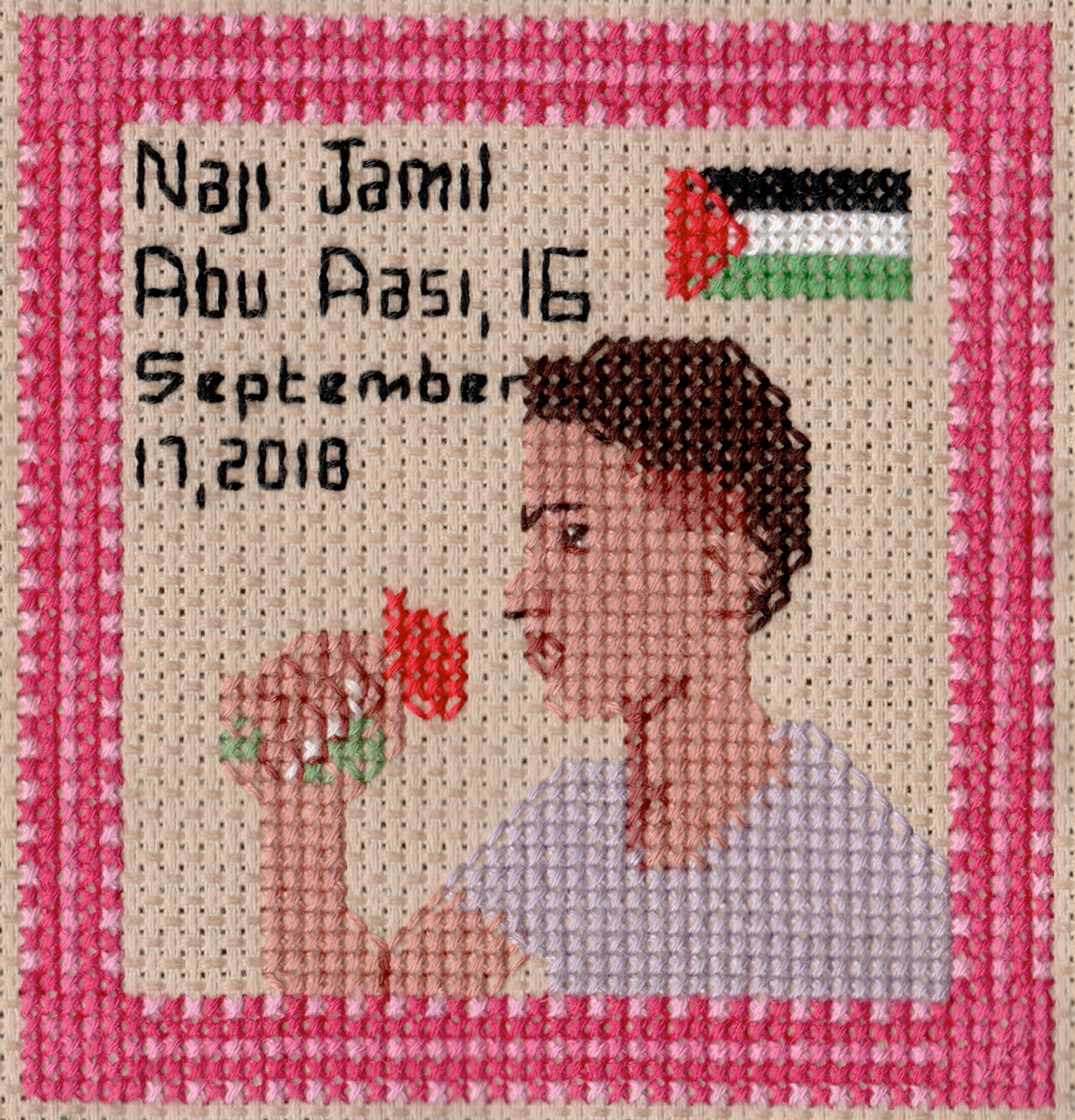 Twenty of the twenty-three Palestinians killed in the month of September, 2018, were from Gaza, including 16-year-old Naji Jamil Abu ‘Aasi, who was killed on the 17th by an Israeli missile, along with his cousin, 19-year-old Ala Ziad Abu ‘Aasi (portrait follows in part 2 of this series.) Both were from the Bani Sohaila town in eastern Khan Younis. 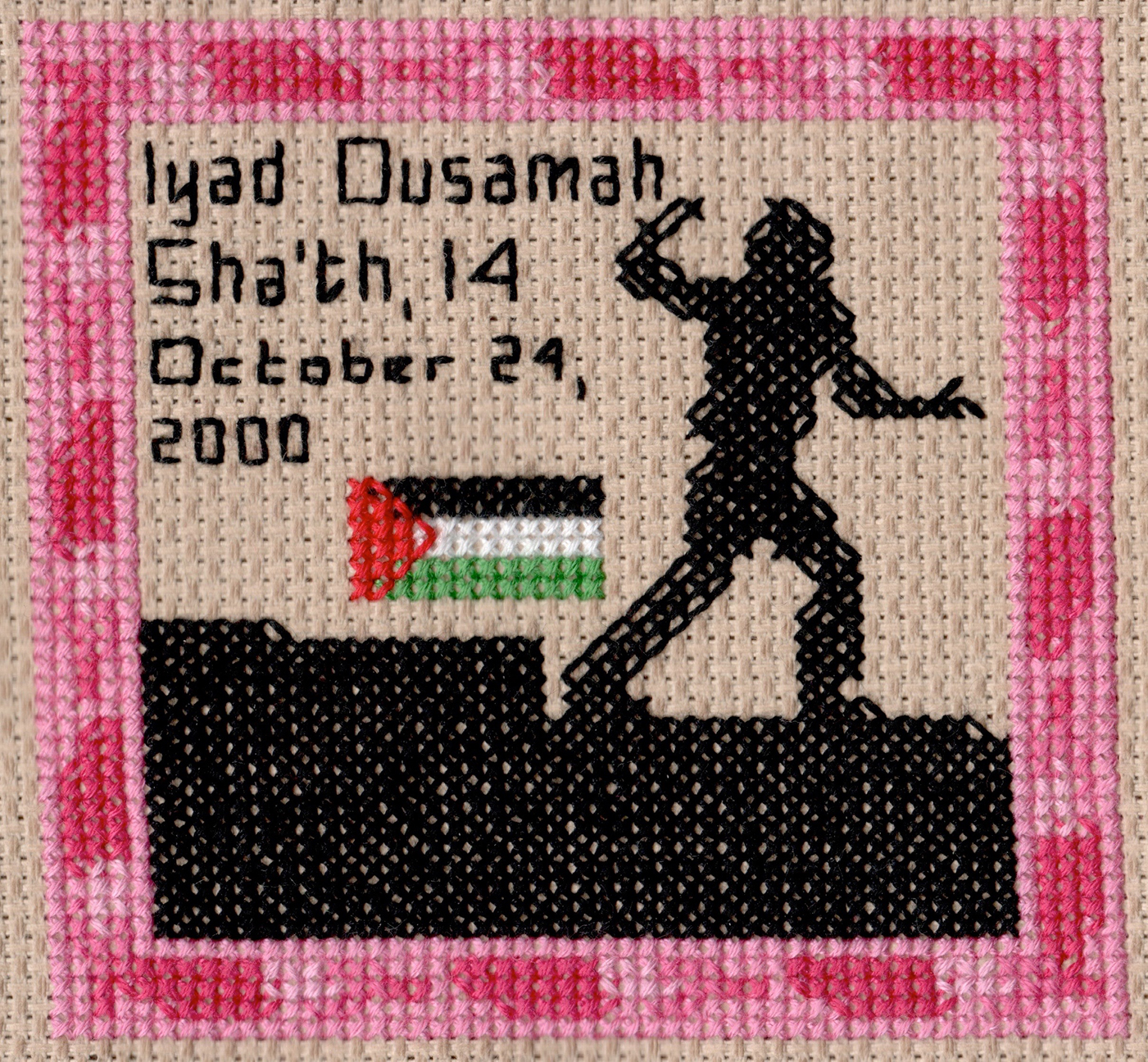 Israeli General Ariel Sharon’s September 28, 2000 walk through the Muslim holy site Haram Al-Sharif in occupied east Jerusalem, as he was accompanied by hundreds of Israeli police officers, triggered the second Palestinian Intifada. But the uprising had more to do with the failed peace process, continuing settlement expansion and the deteriorating lives of Palestinians living under occupation. According to Defense for Children International, more than 1,996 children have been killed since then, with 700 children killed between September 2000 and February 2005, including a 14-year-old resident of Khan Younis, Iyad Ousamah Sha’th, who was killed by live ammunition on October 24, 2000. 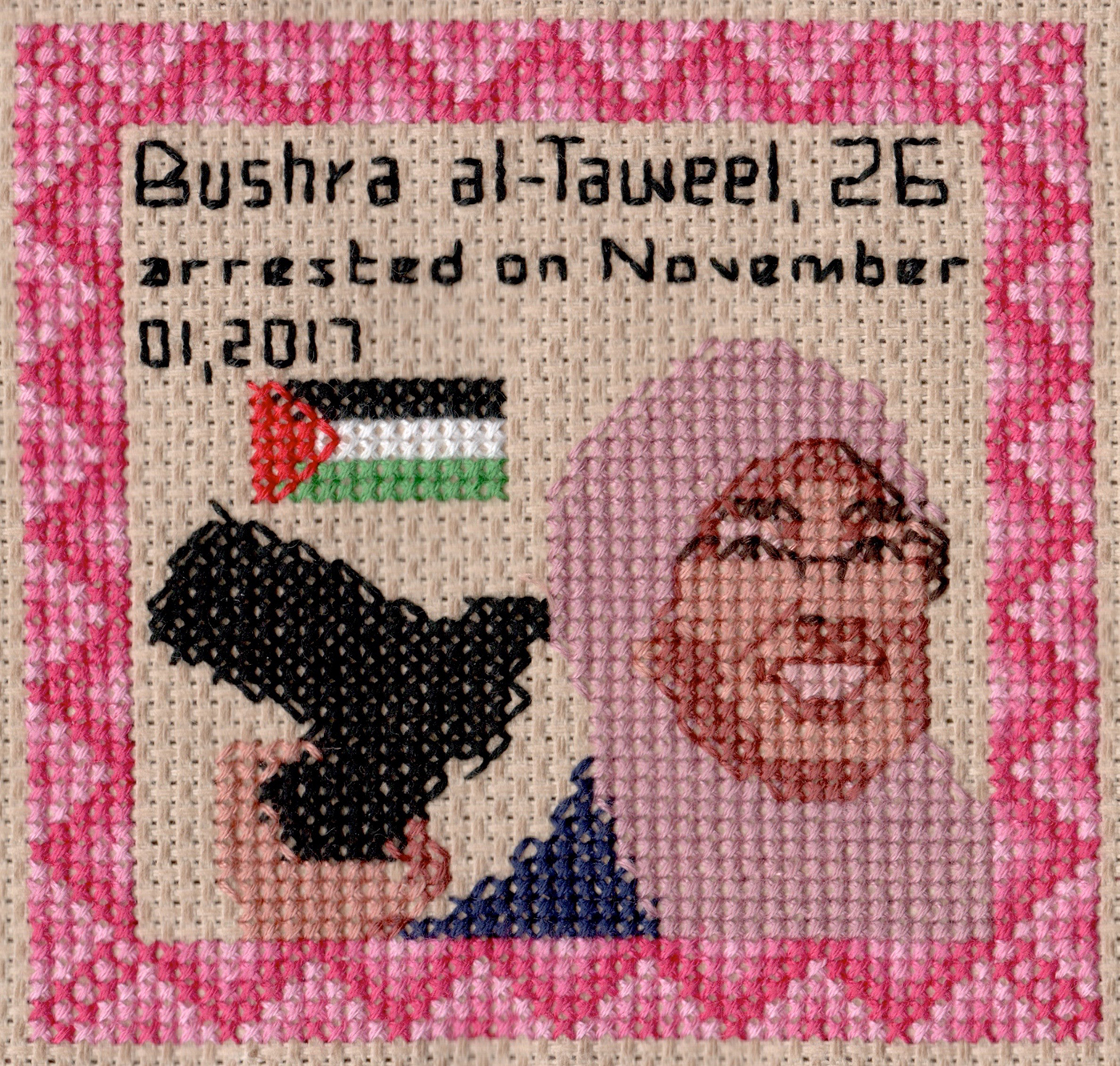 The 26-year-old journalist and photographer Bushra al-Taweel has been arrested three times in her young life by occupation forces, with the latest arrest happening on November 01, 2017. According to the Prisoner Support and Human Rights Association ADDAMEER, “Human Rights Defender Bushra al-Taweel has been subjected to continuing adversity imposed by the occupation forces. She was first arrested at 18 years old and was released from her second arrest in May 2015 after serving almost a year in detention. Now, Bushra is imprisoned under administrative detention. She will, hopefully, be released in July 2018 after spending 8 months without having any charges brought against her and without having the opportunity to stand trial.” Bushra remains a detainee at the Hasharon (Telmond) Prison in Israel. 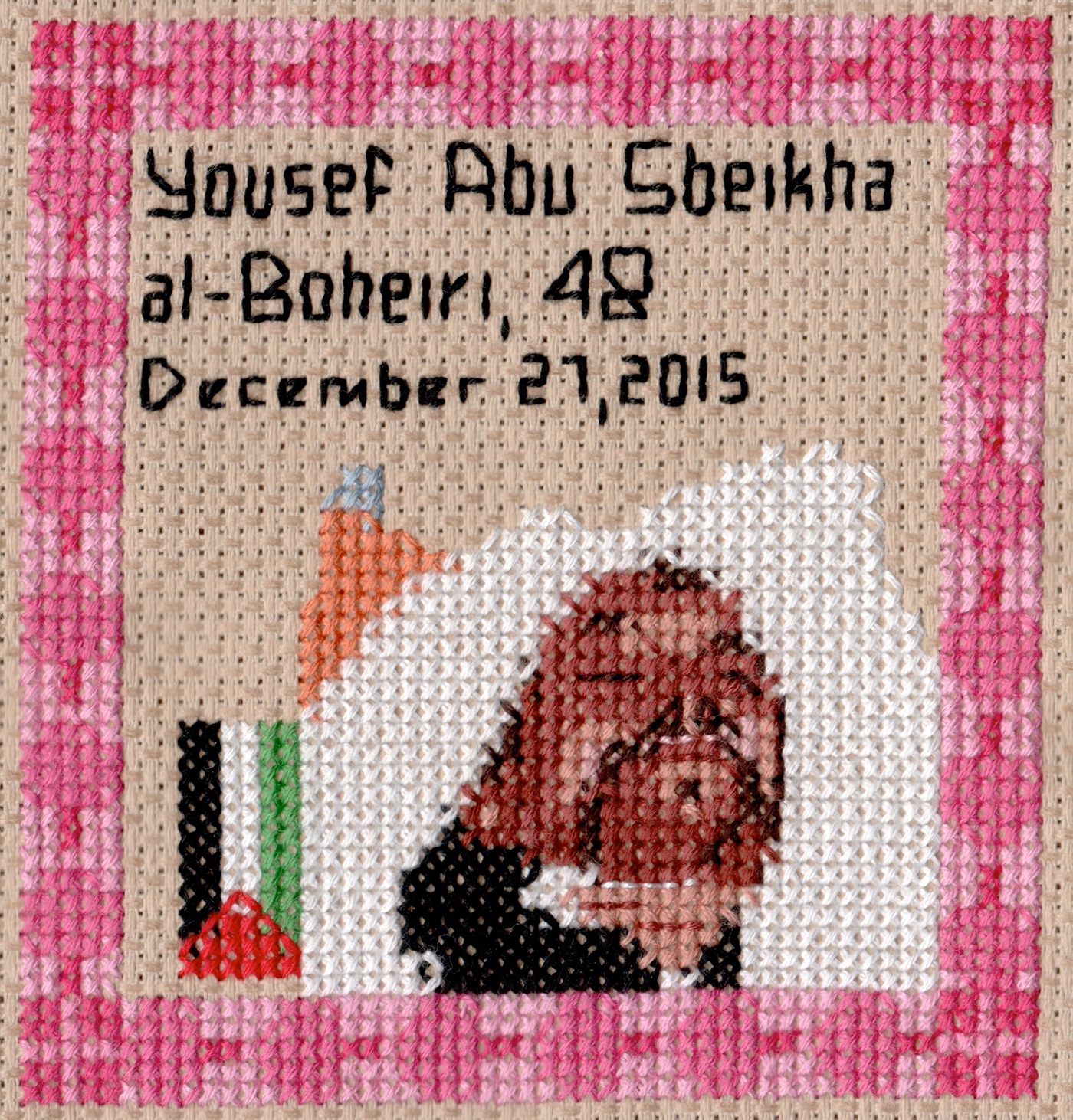 A 48-year-old farmer, Yousef Abu Sbeikha al-Boheiri from the al-Maghazi refugee camp in central Gaza, died on December 27, 2015 from gunshot wound she had sustained the previous Friday while working in his farmland. (Border pattern includes olive trees. “Since 1967 some 800,000 olive trees have been uprooted by Israeli forces and settlers in the occupied West Bank alone.”)

I would like to thank The Electronic Intifada, Defense for Children International, Addameer, Israel-Palestine Timeline and B’tselem for providing valuable material for this project.

Priti Gulati Cox (@PritiGCox) is an interdisciplinary artist and a local activist for the peace & justice organization CODEPINK.