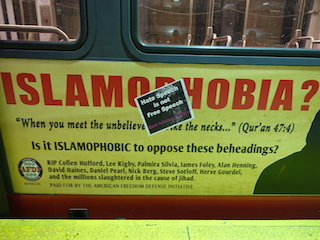 Last month, anti-Muslim advertisements appeared on the side of San Francisco's public transportation, or MUNI. The organization behind them, ADFI, is classified as a hate group by the Southern Poverty Law Center, and they raised money for the ads through the crowdsourcing site Indiegogo, despite activists' calls for the campaign to be removed.

Indiegogo refused the pleas of thousands to remove the hate from the site. When the "brain's" behind the effort Pamela Geller was asked why she is targeting Muslims with her hate campaign, she retorted: "... since September 11, 2001, “there have been no [religiously motivated] acts of violence committed by Christians, Jews, Hindus or followers of any other religion,” adding, “No sect or school of Christianity, Judaism, Hinduism or any other religion teaches any such thing."  The wisdom behind bigotry.

This is not Geller's first shot at infamy. You might remember Geller's name from an earlier hate campaign in 2012, which also found its way onto buses in San Francisco and New York City, calling Muslims savages as she promoted the Israeli occupation of Palestinian land.

Nothing of the above is new. What is, however, is the spike in violence against Muslim-Americans and their families since the hate mongering campaign started against them and the failure of 'progressive' companies like Indiegogo to stop the hate, especially when it violates their terms and conditions.

CODEPINK's own Nancy Mancias visited Indiegogo twice in October to deliver a petition sponsored by CODEPINK that calls on the social fundraising company to reject having their platform used to spread lies and hate. The petition has reached over 4,000 signatures, yet Indiegogo silence is loud.

"We emailed Indiegogo and visited the Indiegogo offices in SF where we showed them that this campaign was in direct violation of their own stated Terms and Conditions, which claim to create a safe environment free of hate-speech and discriminatory campaigns." CODEPINK organizers said. CODEPINK also launched a Twitter campaign calling on Indiegogo to stop the hate.

"@Indiegogo, stick to your Terms and Conditions and ban the use of #crowdfunding to spread #ADFI hate! #SAYNOINDIEGOGO via @codepink"

By doing so, Indiegogo is complicit in Gellar's hate messaging by facilitating funding to a designated hate group. I wonder if the KKK decided to use Indiegogo, would they let them grace their website with their white covered heads or would the company stick to the conditions that they themselves set?

Media and complicit hate groups such as the Anti-Defamation League and others have been drumming louder and louder as the war on the Middle East expands in reach and continues to be extended. But hate speech has tangible consequences.

The murder of a Muslim teenager, of Somali heritage, outside a Kansas City mosque is not making the rounds in media, but it is a devastating crime that left the community in shock and grief. The community there says they notified the the authorities about the threats made against them by the killer, but no move was made.

This week, a Muslim-American cab driver in Seattle was assaulted because of his religion, according to KIRO 7 News. The driver was punched repeatedly in the face while driving, causing him to crash into an apartment building. Police arrested his passenger on suspicion of a hate crime, and KIRO 7 found out the suspect may have ties to the military.

But for months now there has been a visible spike in attacks against Muslim-Americans. Think Progress reports:

In early October, a threatening letter was sent to a mosque in San Diego, California. The envelope contained an unknown substance which authorities ultimately decided was harmless, but the letter also contained the phrase “death sentence.” On October 28, a vandal in St. Paul, Minnesota, spelled out “Fuck Islam” in motor oil on a driveway in a neighborhood where several Muslim families live. On the morning of November 4th, five shots were fired at a mosque in Coachella, California. Although four people were inside at the time, no one was hit. Authorities are investigating the incident as a possible hate crime. In mid-November, surveillance cameras recorded a woman spray-painting the wall of mosque in Santa Cruz, California. On November 20, visitors to a Bosnian-Muslim graveyard in Washington state were shocked to find the headstones of their dead family members destroyed. Last Thursday, a mosque in St. Cloud, Minnesota was vandalized for the third time in as many weeks, with unknown assailants repeatedly shattering windows at the house of  worship".
In the midst of violence, Muslim-Americans joined by everyone with a conscious, were shocked to see the hate ads circling beautiful San Francisco, but Gellar is not done yet. She is now taking her hate message to Seattle, the very location of the latest hate crime against a Muslim. Philly mag reports that "the Seattle SEPTA has lost an early round in its battle to keep an anti-Islam advertisement off of its buses" after a federal judge last week ruled "the agency cannot present testimony that the ad is false — saying the First Amendment protects political speech even when it’s incorrect".

Geller responded to criticism over her lies, by calling Muslim American activists "thugs" on her website, which sheds more incite on the racially superior stances she takes. But at a time where black and brown lives are worth much less than white lives in the eyes of the police and grand juries around the nation, maybe it is time to stand together, not against Gellar's right to say whatever she desires, but stand against racially and ethnically motivated hate and violence and to admit to ourselves that the demonization of 1.3 billion people is morally wrong and that there is no space in our communities for hate and bigotry.