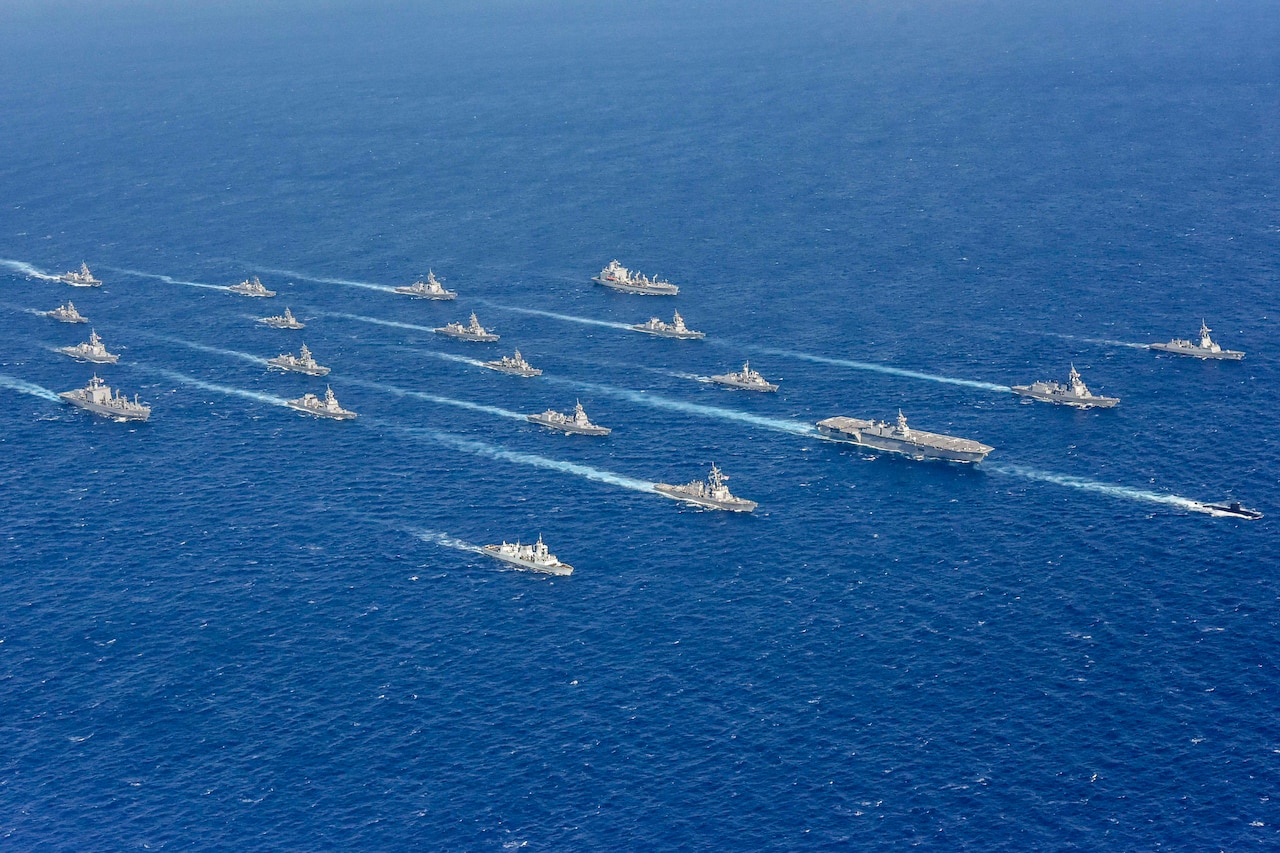 Ships from the U.S. & other Western nations patrol the waters of the Asia-Pacific region, costing taxpayers billions.

As the last U.S. troops left Afghanistan, the military establishment and the contractors who have raked in the profits as Afghanistan’s civilians suffered immeasurably had already turned their attention to the next war they could use to justify allocating nearly half of the United States’ total discretionary spending on the Military-Industrial Congressional Complex. The process of constructing America’s next “great threat” to justify militarism began with President Obama’s “Pivot to Asia,” which started the U.S.’ current military buildup in the Asia-Pacific region and initiated an era of anti-China legislation that continues to this day. One of the more recent and alarming anti-China initiatives is the Pacific Deterrence Initiative (PDI), which would allocate $5.1 billion to the Department of Defense’s $66 billion dollar Indo-Pacific budget for the fiscal year 2022.

The Pacific Deterrence Initiative was created with the stated goal of budget transparency to allow Congress to track military spending in the “Indo-Pacific” region and to ensure “joint force lethality” against countries that the U.S. may choose to go to war with, like China. One year after it was first enacted as part of the National Defense Authorization Act of 2021, the PDI is already being criticized as another Pentagon slush-fund, leading many to argue that it should be eliminated altogether. Even some of the initial creators of the PDI have claimed that it has already failed to improve budget transparency, a noble yet lofty goal considering that the Pentagon itself has never passed a Congressionally-mandated budget audit.

The aim of the PDI is absurd as it creates yet another category in the labyrinthian Pentagon budget which has never been accountable to Congress nor to the American people. If the creators of the PDI were really concerned with budget transparency, they would eliminate the PDI and reinvest into pressing domestic needs like public health, education, poverty reduction, and combating the climate crisis. In fact, reinvesting these public funds into any federal department except the Department of Defense would actually provide budget transparency as, unlike every other federal agency, the Department of Defense has NEVER passed a financial audit.

The PDI was initially introduced to Congress by Senator Jim Inhofe, who, at the time, was the Chair of the powerful Senate Armed Services Committee. Inhofe built a bipartisan PDI coalition in the Senate, using commentary and opinion pieces to advocate for multi-billion-dollar military investments with fellow Republicans like Cory Gardner and with Democrats on the committee, like then ranking member Jack Reed. In their statement, Inhofe and Reed refer to China seven times, consistently seeking to inflate the threat of China’s significantly smaller and less advanced military by fear mongering about China’s military modernization.

Their logic may initially seem like simple deterrence: “Greater numbers of combat-credible U.S. forces in the Indo-Pacific will make it harder for China to seize and maintain the advantage early in a conflict.” Yet the U.S. already outspends China’s weaker and less aggressive military, frequently allocating roughly three times as much on the military as China does year after year. The numbers for 2020 speak to this trend as the U.S. spent $778 billion on the military while China spent $252 billion on their military. This disparity in defense spending illuminates how Congress, military leaders, and weapons contractors have grossly inflated the threat of China as a justification for further military spending even as the U.S. outspends China and every other country, to the detriment of people within the U.S.

Instead of working to solve the greatest threats to Americans’ safety and survival like police and gun violence, lack of healthcare, or the death and displacement being caused by climate catastrophes, the PDI is a massive giveaway of our tax dollars to weapons manufacturers and defense contractors. In fact, if you look at who is funding members of the PDI coalition, it makes their motivation for supporting such a massive war resolution even clearer. While outspending China’s military won’t make people in the U.S. any safer, it will keep the campaign contributions from military contractors flowing to the PDI coalition.

As they say, if you want the truth, follow the money. The truth is each and every member of the Senate PDI coalition that has advocated for this multi-billion dollar military expansion in the Asia-Pacific region received significant campaign contributions from the very companies who would directly profit from military contracts in the PDI.

Starting with the leader of the PDI Coalition, Jim Inhofe — Inhofe has received over half a million dollars in campaign contributions from the Defense and Aerospace industries in his career, with most of that money coming in the last five years. From 2015 to 2020, four out of five of Senator Inhofe’s top contributors were military contractors like Lockheed Martin, who spent over $80,000 since 2015 to buy Inhofe’s support for wasteful military projects like the PDI.

This conflict of interest — in which companies that profit from war, death, and destruction pay members of Congress to legislate more war games, confrontational foreign policy, and military contracts — is unfortunately bipartisan. Democratic Senator Jack Reed, who is now the Chairman of the Senate Armed Services Committee, received over $195,000 in campaign contributions from Miscellaneous Defense companies over the last 5 years. In addition, Reed received over $240,000 in contributions from Defense Aerospace and Defense Electronics companies over the last five years, bringing his total Defense Sector campaign contributions over five years to over $437,000.

Former Senator Cory Gardner of Colorado only served one term in the Senate, but over his brief ten year political career, he received over $213,000 of campaign contributions from the Defense Sector. In return, he authored and co-sponsored the legislation, along with Democratic Senator Ed Markey, such as the Asia Reassurance Initiative Act of 2018, a precursor to PDI that gives the Department of Defense over $7 billion of our tax dollars to spend on military equipment and war games in the Asia-Pacific region — all with the stated goal of “joint force lethality.” The Asia Reassurance Initiative was passed through both chambers of Congress without rebuke from a single member. Now Congress is debating H.R. 3524 The EAGLE Act, which would amend the Asia Reassurance Initiative to increase the amount appropriated to the Department of Defense to $2 billion dollars annually and extend these appropriations an additional three years into 2026.

Another active member of the PDI coalition, Senator Roger Wicker, also received more than $200,000 in campaign funding from the Defense Sector over just the last five years. Unsurprisingly, Wicker has been a vocal supporter of the PDI and other legislation to increase military spending and expand the U.S. presence in the Asia-Pacific region, like his SHIPS Act.

Each of these members have taken substantial sums of money from the Defense industry to saber rattle against countries in the Middle East and, as the United States’ War on Terror comes to an end, they’ve set their sights on China. They constantly fear monger about distant nations who do not and cannot threaten the people of the U.S. because these conflicts keep the money flowing both from the U.S. government to Defense Corporations like Raytheon and Lockheed Martin and from these companies’ lobbyists to PACs and direct contributions to politicians.

Our weak and deregulated federal election system has created this cycle of wasting OUR tax dollars on “forever wars” that produce nothing but pain, suffering, death, and displacement for many while generating large profits for private defense contractors. Now, in the wake of the catastrophic failure of the U.S. War in Afghanistan, we must break this cycle by urging Congress to cut the Pentagon budget to prevent the next protracted quagmire of conflict and warfare. We must eliminate the $5.1 billion dollar Pacific Deterrence Initiative, stop the additional $7 billion in military funding in H.R. 3524 the EAGLE Act, and strive for collaboration and cooperation with potential allies like China on issues like the climate crisis and global health.

RJ Thomsen is a staff writer, organizer, and activist with CODEPINK’s China Is Not Our Enemy Campaign.