Over a million dead, yet 5 percent more? 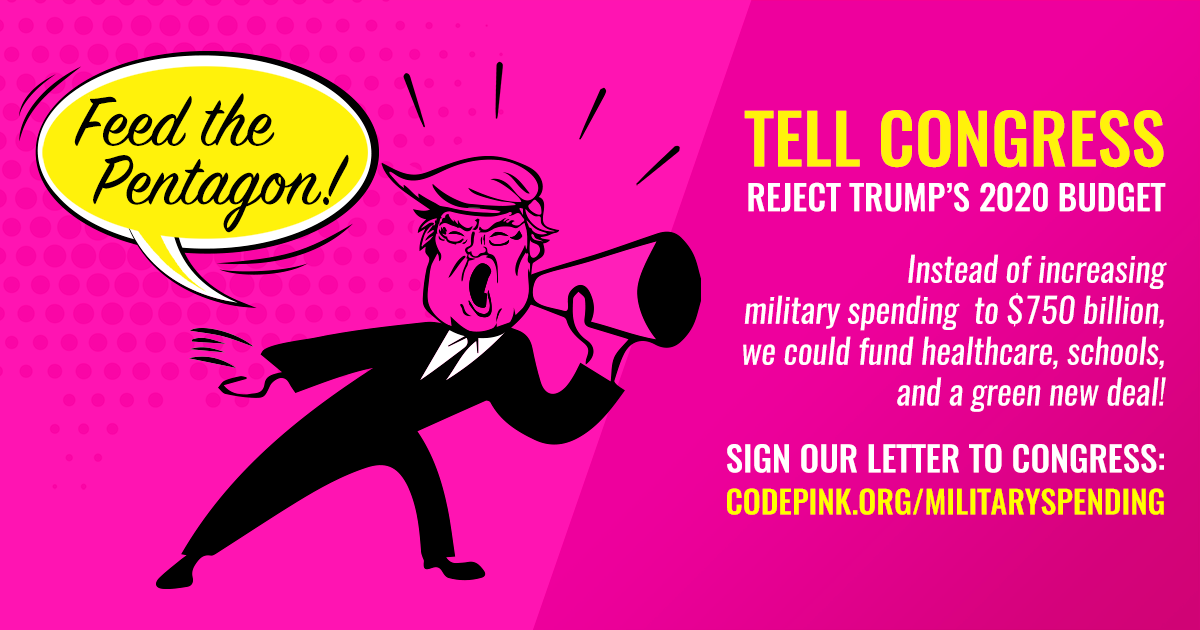 This is absurd! Just in December President Trump shocked the military establishment with a tweet describing the current level of U.S. military spending as “crazy” and calling for a “meaningful halt to what has become a major and uncontrollable Arms Race.” Now he has done just the opposite: While slashing social programs, he is proposing an almost five percent INCREASE to the already whopping $716 billion 2019 Pentagon budget. Next year’s proposed “national security” (aka military) budget totals $750 billion, including billions for the U.S. nuclear weapons arsenal and Trump’s border wall. Enough is enough! Send an email now telling Congress we need to cut, not increase, military spending. Tell them to reject Trump’s 2020 federal Pentagon budget.

The Pentagon couldn’t even pass an audit last year, yet the agency continues to be rewarded with more money while other federal agencies face severe cuts. Our elected officials are throwing money at the most destructive agency on the planet, an agency that causes senseless death and destruction, creates extreme pollution and CO2 emissions, and enriches the corporate elite who profit off of killing.

Today marks 16 years from the start of the U.S. invasion of Iraq. This senseless war took the lives of more than 4,400 Americans — far more than the 3,000 killed on 9/11 — and over one million Iraqis! The U.S. military is still engaged in Iraq and Afghanistan, and the Trump administration is now threatening new wars in Iran and Venezuela. As long as we keep pouring endless funds into the Pentagon, we will be engaged in endless wars. Send a message now to Congress: The American public doesn’t want more endless wars. Reject Trump's Pentagon budget!

We have seen in this past year an inspiring explosion of activism and public support for a Green New Deal, for a Medicare for All health system, and for free college education for our nation’s youth. The naysayers always say, “But how can we afford these programs?” The answer is simple: Chop the Pentagon budget and put the “savings” into these critical programs that would truly make our nation more secure.