Last month the CODEPINK Local Peace Economy campaign put out a call to action asking members to gather friends and knit items for refugees in Lesvos, Greece. With monthly averages still in the thousands, the sheer scale has left many of us shaken. At a recent Knitting for Refugees gathering  in Venice, California  helping us  to better understand the enormity of this contemporary crisis was Ameeta Nanji. After returning from a recent trip in Greece, where she volunteered with Dirty Girls, Ameeta was compelled to give the human story behind the statistics. Below are her words with images depicting her time volunteering in Lesvos.

Ninety-nine  or probably 100% of us can trace our origins to having family members migrating to this country in search of a better life. My forefathers (and foremothers) left India in search of better economic circumstances in the early 1900’s.

My family has related stories about the 3-4 week perilous journey that my grandfather and my grandmother made in their early teens. They sailed on wooden dhows across the Indian Ocean. I can only imagine the uncertainty and hardships they must have faced not only as they made this journey to the East African coastal town of Mombasa, but even after they made their way inland to start their new lives in an unfamiliar country, let alone on a whole new unknown continent Africa.

And here I am, today, because my father believed the United States would offer us the best opportunities in life. After all America is a beacon to the rest of the world. A country where people from all over the world can come and can be who they are, pursue the ‘American Dream’ and add to the vibrancy of the great American mosaic. Even the indigenous peoples of America immigrated from elsewhere thousands of years ago.

Today, I am here to share my experiences of witnessing first-hand the real people behind the statistics who have fled the on-going humanitarian crisis in the Middle East, that is unimaginable to us here.

Having had enough of listening to the news and seeing images of drowned children that was making us feel more and more depressed and helpless, My friend Nina Rota and I decided to go to Leaves, Greece ourselves and make ourselves useful. We decided to leave on Christmas day for one month

We arrived on Lesvos, rented a car and headed north to meet Alison Terry –Evans, the one person Nina knew there.

Alison is photographer from Australia who has lived on and off Lesvos for the last 8 years. She gave us a tour of the makeshift camps set up by different volunteer groups and took us to her headquarters, a red tent set up in a small makeshift camp called The Lighthouse. 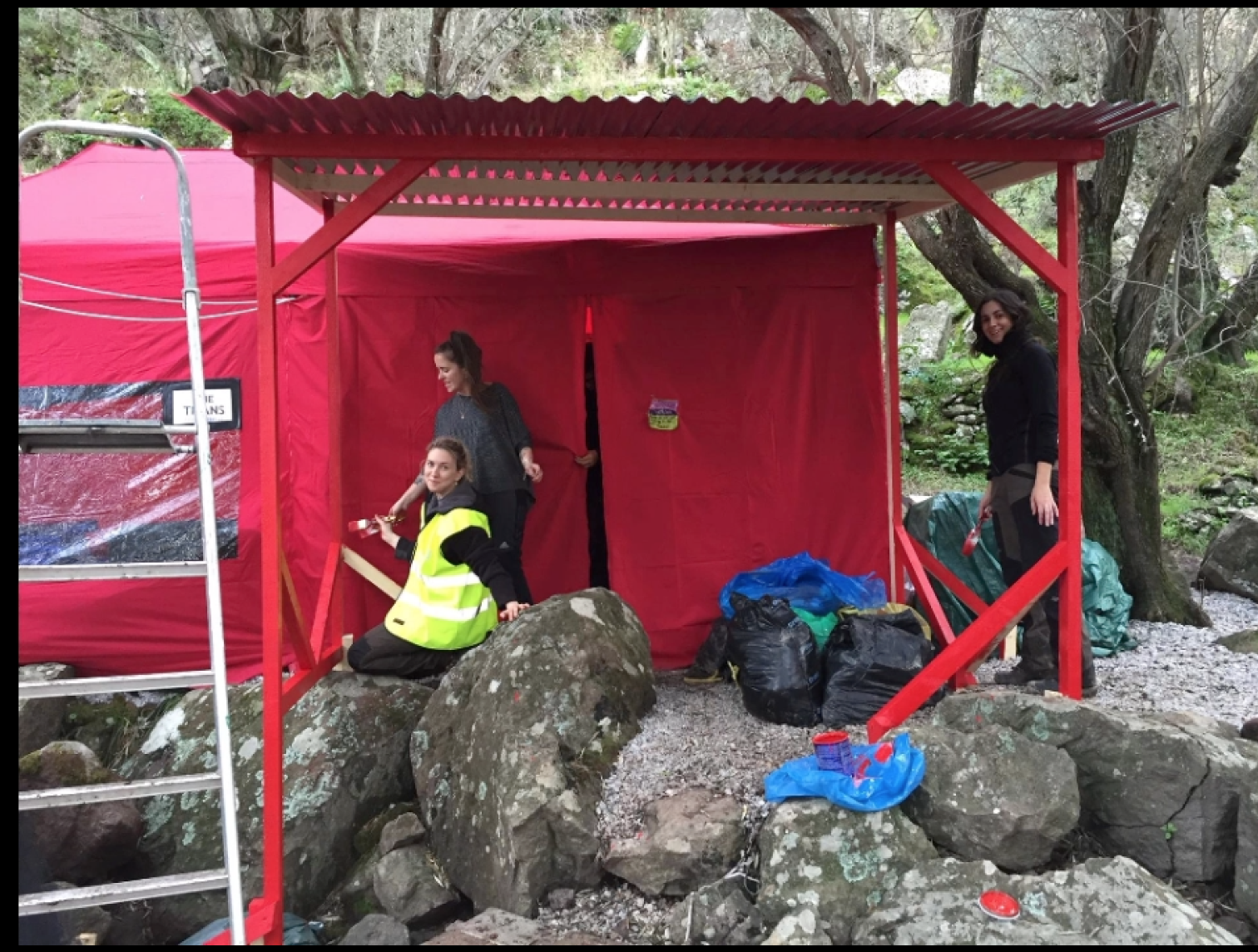 The Lighthouse camp is situated in Skala Sikaminias a sleepy fishing village with a tiny church dedicated to the Mermaid Madonna. Skala is the shortest distance between Turkey and Greece, a stretch of approximately 6 miles that can take the inflatable rubber dinghies between 1 to 4 hours to reach Lesvos, depending on the weather. The Aegean Sea is known to be particularly treacherous at the best of times in this area.

Alison has founded a group called the Dirty Girls of Lesvos Island! A name I must admit, took me by surprise but over a short time has become very endearing to me. The group provides dry, clean, clothes to the women, men and children coming off the flimsy rubber dinghy boats.

Alison offered Nina and I a project: to sew together discarded, otherwise useless lifejackets to insulate the red tent; we were there during the coldest and wettest time of the year. 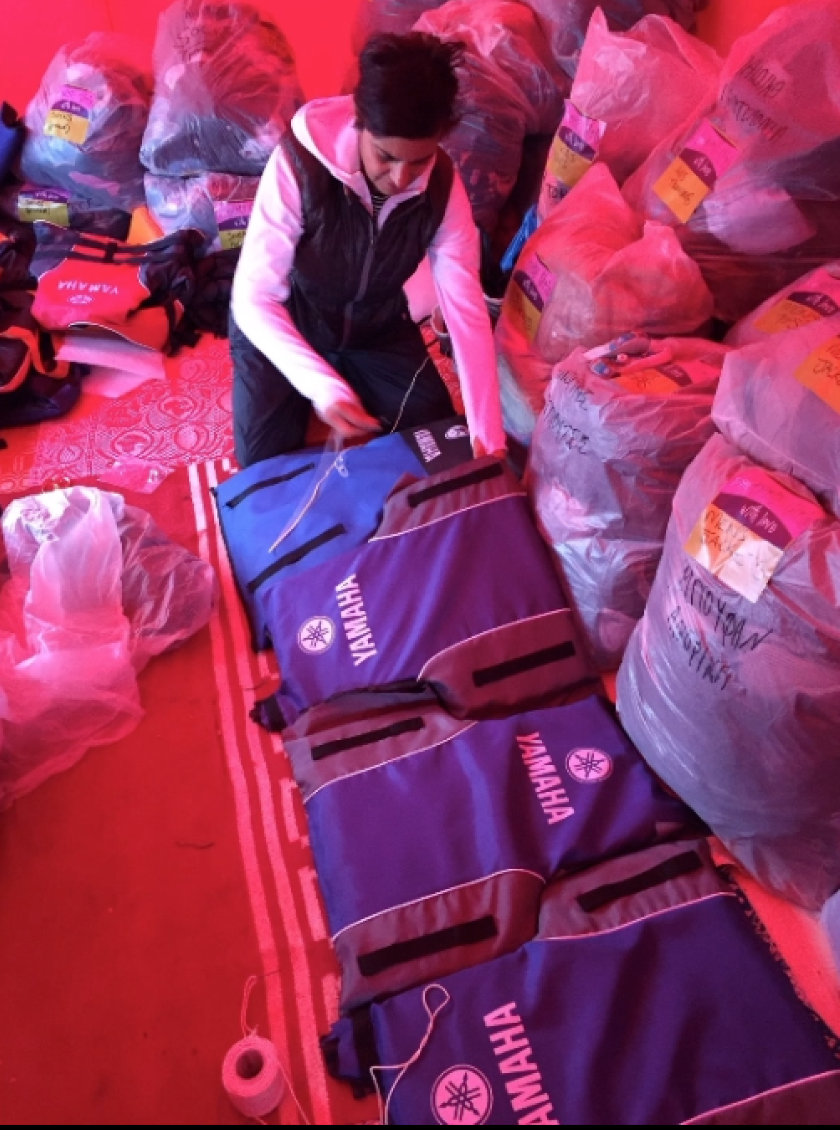 A few days later I had my first experience of seeing a boat coming to shore. Right in front of the Lighthouse Camp, a group of Spanish Lifeguard volunteers were holding binoculars and waving, one of them waving a fluorescent orange lifejacket. Others stood on the rocky shore with open arms. They had spotted a little orange dot, a rubber dinghy packed with people in life jackets, and soon they got close enough to predict where the boat might land. At this point I joined a small crowd running to the shore to meet them.

Some people collapsed as they got off the boat because their legs had gone numb from spending an hour with 50 people on a raft only meant to carry 12 adults. On the shore, volunteer doctors checked the babies' temperatures and dried them off. I tried to contain my tears, shock and concern, focusing on greeting people with a smile and a warm pat on the back.

For the next few days, I helped escort soaked women, men and children, exhausted from their journey to makeshift changing rooms in the Lighthouse camp where we gave them dry, clean, clothes, hot tea and biscuits. Some people needed more assistance. I saw one young boy being carried on a stretcher to the medical tent. I found out he was suffering from hypothermia, which is caused by prolonged exposure to extremely cold temperatures. 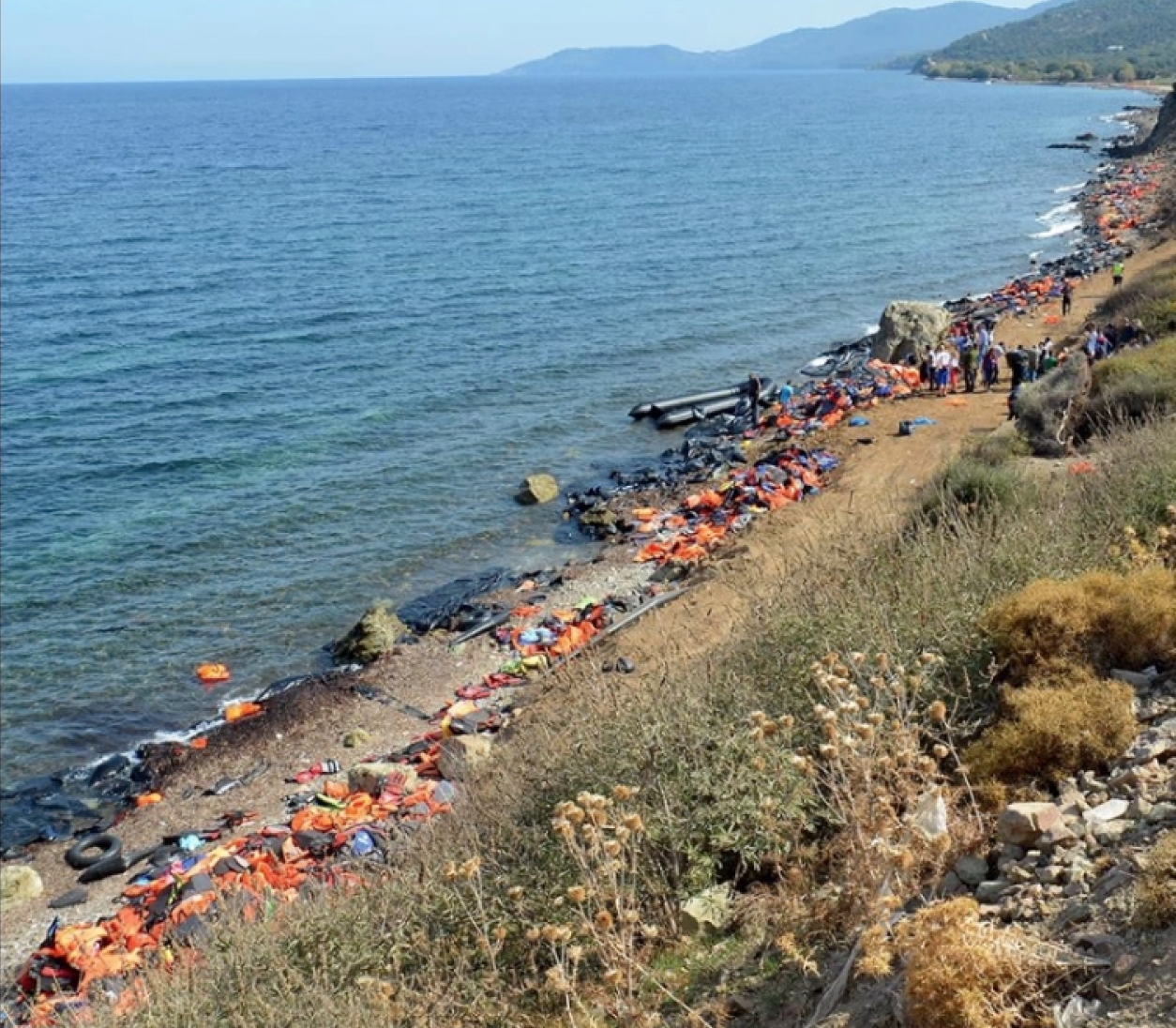 It was here at the LightHouse Camp that, people would wait for vans to take them to more official refugee camps where they would be registered and eventually get to Mitilini the main port of Lesvos where they had to buy ferry tickets to get to Athens which cost approximately $100 each, to continue their journey through Europe. The people arriving are primarily Syrian, Afghans, Iraqis, Somalis, Pakistanis and Iranians.

Women, Men and children are coming from a place where their homes are being bombed, their friends and family members are being killed, and many of them are escaping from being forced to join ISIL. 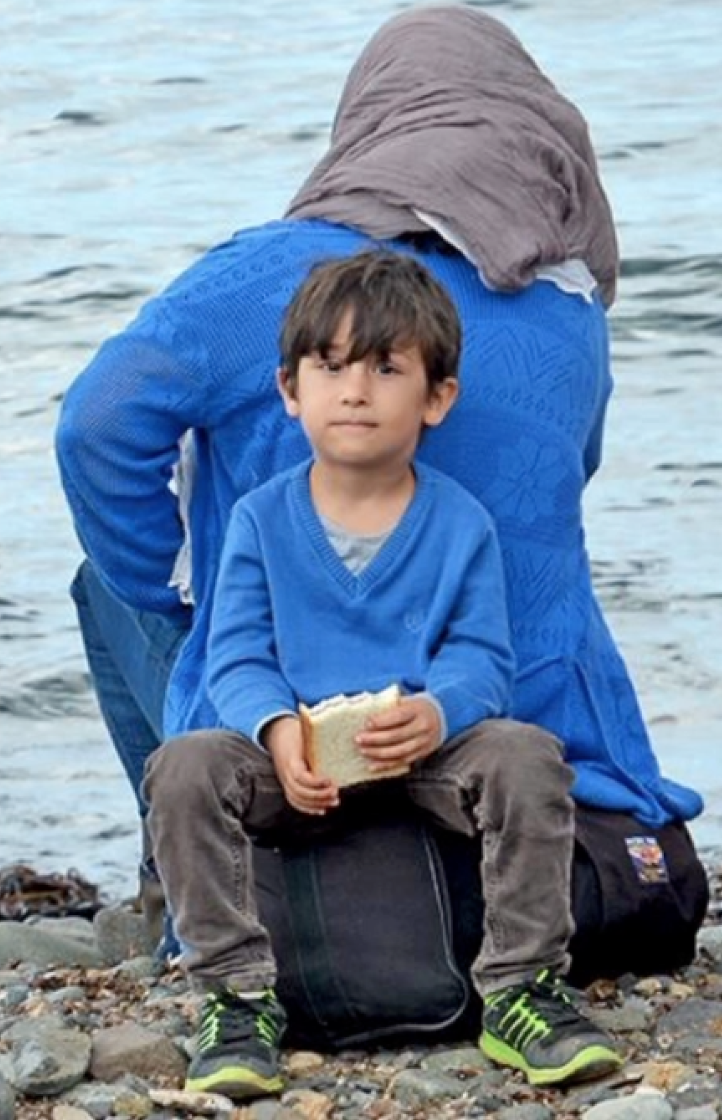 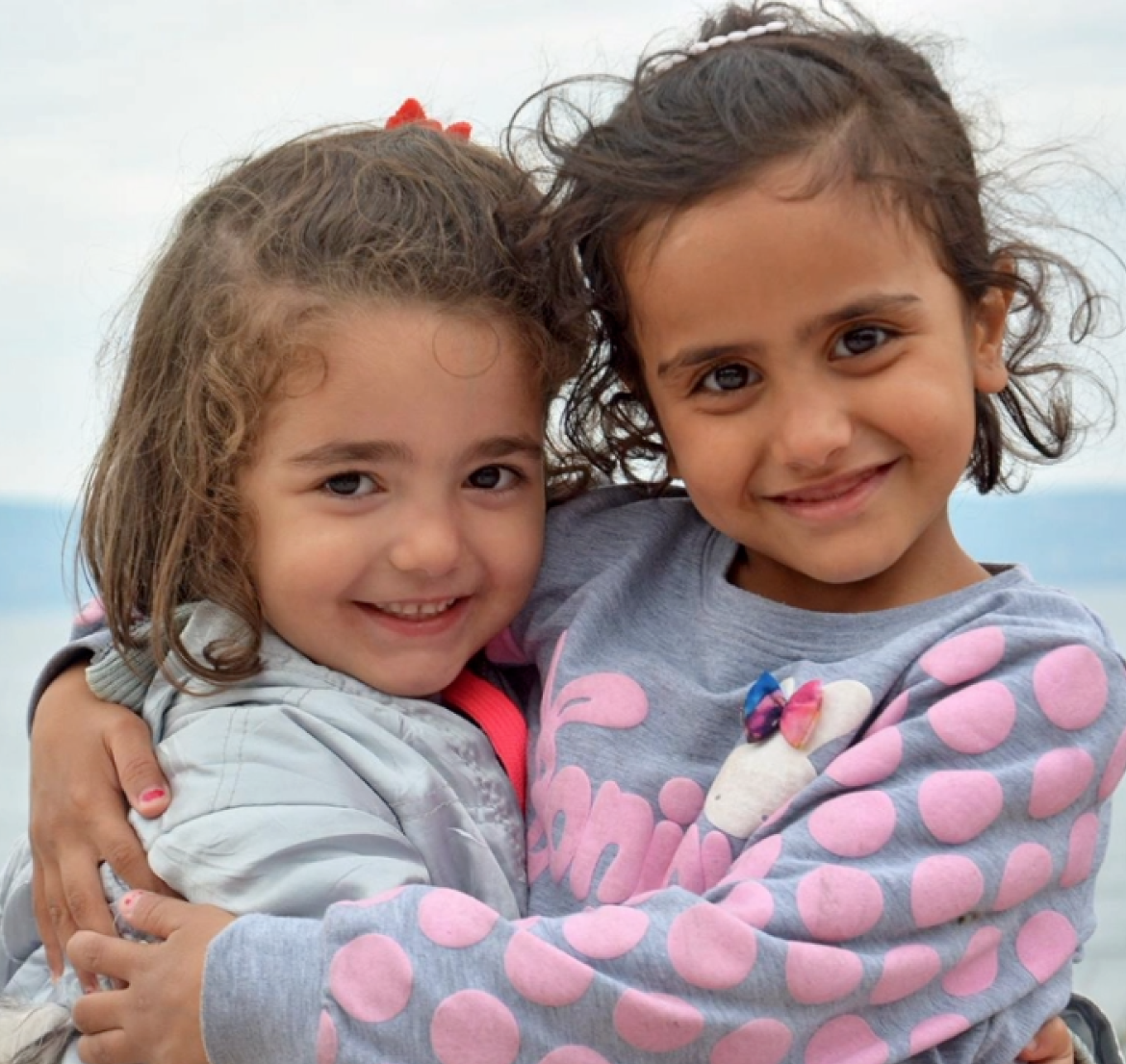 As the smugglers also called traffickers  on the other side of the Aegean Sea reap the benefits of human desperation, the boats keep coming in an endless flow. Approximately 6 boats come into about 4 different areas on the island, during the day and night, carrying approximately 50 people each. This adds up to approximately 1,200 people arriving daily. The traffickers in Turkey are making approximately $1, 800,000 a day.

Many of the people have walked approximately 150 miles from Syria to Turkey and have paid traffickers approximately $1500 each, to get a spot on the inflatable boats to make this dangerous journey across the sea. May I add, that when the weather conditions are particularly stormy, the traffickers offer a 50% discount. The refugees have heard devastating stories of people drowning on their way to Greece, but this has not deterred them since it has become their last and only resort to safety.

Laleh an 18 year old girl, having survived the crossing, is optimistic  about her future.  She tells me “I will go to Holland where my aunt lives. And one day I will go back to Syria. Syria was paradise.”

Despite this being the biggest refugee crisis since the Second World War, the UNHCR, the United Nations High Commissioner For Refugees has so far not provided a single tent. This year, the organization has distributed a total of 7,400 bottles of water, the equivalent of what local volunteers Philippa and Eric Kempson distribute in a couple of days.

I saw so many kind-hearted, untrained volunteers who are assisting more people than the international humanitarian agencies.

DGLI, was started by Alison Terry-Evans who began collecting wet clothes cast off by arriving refugees. It didn’t take her long to realize that the first thing they needed was dry, clean clothes, socks and shoes. She started washing the clothes she collected at her own home and began supplying dry clean clothes to the next batch of people arriving on the boats. After a month of doing this, she met the owner of a local commercial laundry who offered to help. Today DGLI spends approximately $3000 a day on laundering clothes, socks and shoes. Once clean and sorted they are then re-distributed to the various camps where they are given to the next batch of people arriving on Lesvos. A great practical and valuable service is being performed, a win-win for everyone. The clothes are recycled, the island is saved from being strewn with muddy, wet clothes which would otherwise create an environmental problem and the refugees are happy their best clothes are going to someone else who needs them. 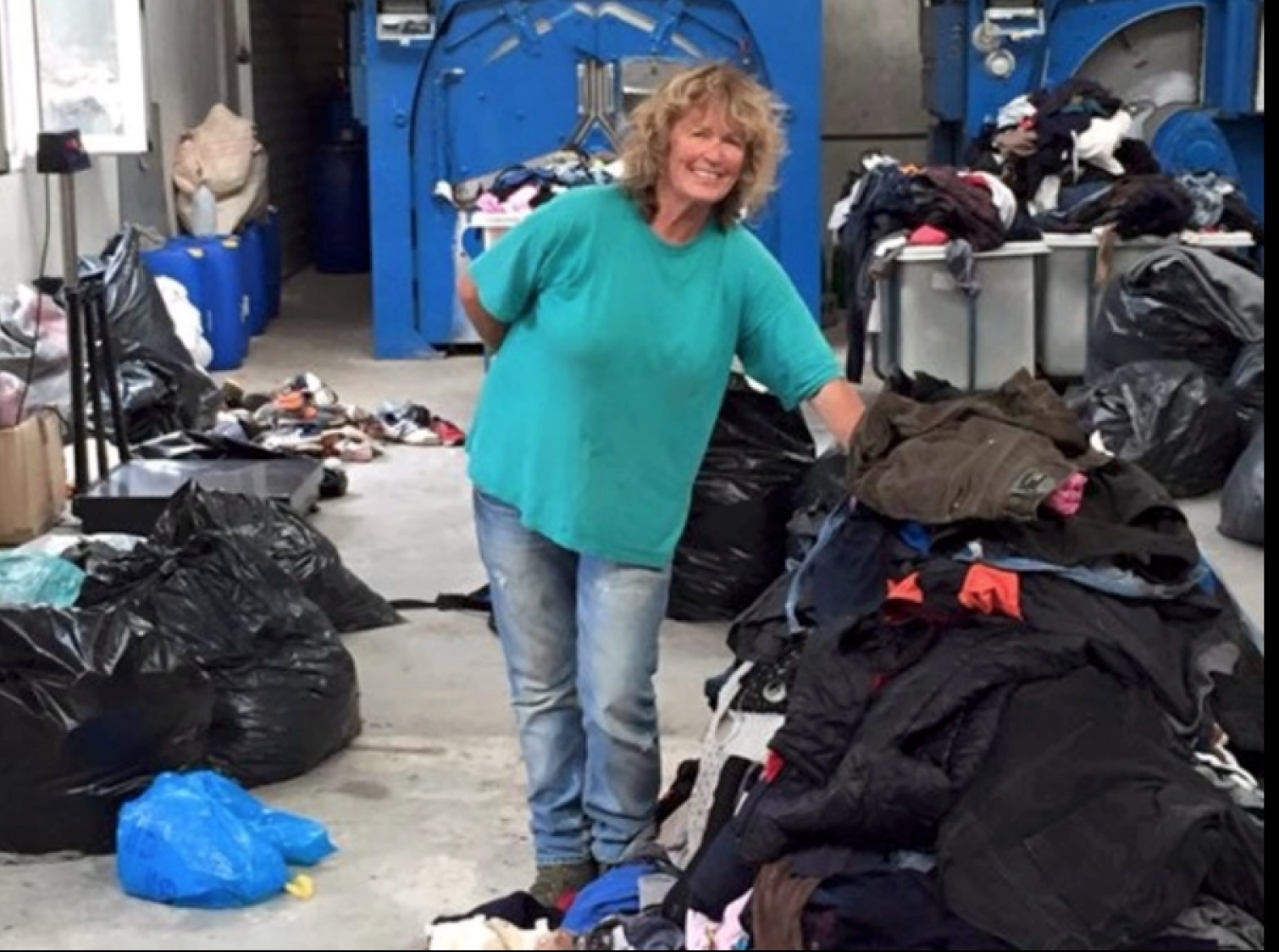 All in all my experience on Lesvos was both heartbreaking and heartening.

It was heartbreaking to see so many people risking their lives and the lives of their children, it was heartbreaking to hear that another boat had capsized and women, men and children had lost their lives. However it was also heartening to see and be part of an amazing group of people from all over the world, so many people of all ages, working together with one goal in mind, to be useful and to help those in need without any monetary reward, to be of service, pure and simple... to do what needed to be done.

I would like to end with Margaret Mead’s quote which keeps running through my head:

"Never underestimate the power of a small group of committed people to change the world. Infact, it is the only thing that ever has.”

One more important thing…please consider giving a donation to DGLI.