Our Disaster: Why the United States bears responsibility for Yemen’s humanitarian crisis 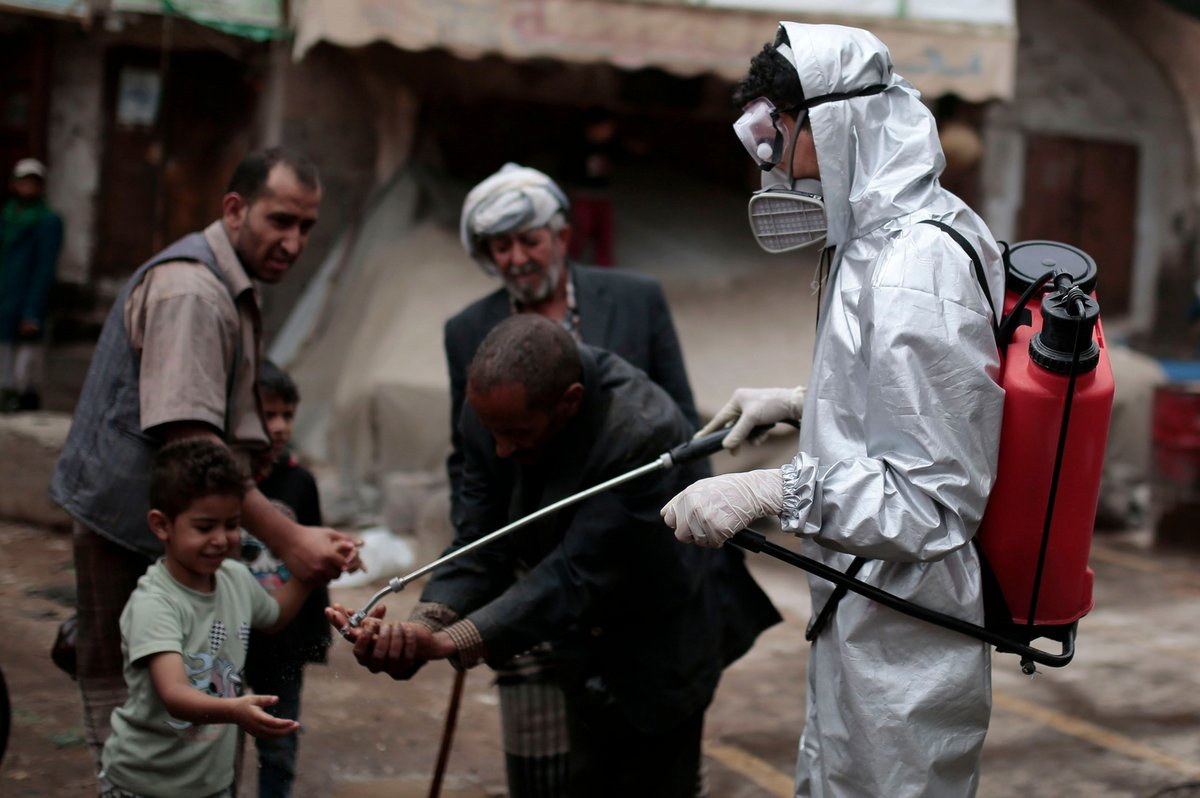 Sanaa, Yemen. 30th Apr, 2020. A health worker wearing a protective suit sprays disinfectant on the hands of people at a market in the old city of Sanaa, amid concerns of the spread of the coronavirus (COVID-19). Photo Credit: Hani Al-Ansi/dpa/Alamy Live News.

An entire generation of Yemeni children has suffered the traumas of war, many of them orphaned, maimed, malnourished, or displaced. The United Nations reports a death toll of 100,000 people in that nation’s ongoing war, with an additional 131,000 people dying from hunger, disease, and a lack of medical care. A report from Save the Children, issued in November 2018, estimated at least 85,000 children had died from extreme hunger since the war began in 2015.

Since then, 3.65 million people have been internally displaced and the worst cholera outbreak ever recorded has infected 2.26 million and cost nearly 4,000 lives. Attacks on hospitals and clinics have led to the closure of more than half of Yemen’s prewar facilities.

The war has had a horrific impact on all Yemeni civilians, but it has compounded vulnerability to violence for women and girls. A recent AP report described a network of secret detention centers where security forces have severely abused women they’ve targeted as dissenters. In the Sanaa governorate alone, an estimated 200 to 350 women and girls are being held, according to multiple human rights groups. A U.N. panel of experts accused Sultan Zabin, the head of the Sanaa criminal investigative division, of running an undisclosed detention site where women have been raped and tortured.

World health experts regard Yemen as a potential hot spot for the coronavirus and have worked frantically to prepare for its arrival.

“Five years of fighting have degraded the health infrastructure, exhausted people’s immune systems, and increased acute vulnerabilities,” the United Nations said in mid-April. As a result, warned Mark Lowcock, the U.N.’s top aid official, “COVID-19 in Yemen could spread faster, more widely, and with deadlier consequences than in many other countries.”

When Lowcock made this statement, Yemen had recorded just one confirmed case of COVID-19 and no deaths. As of May 31, Yemen had 337 confirmed cases and 89 deaths. On May 30, The Lancet quoted Altaf Musani, the World Health Organization’s representative in Yemen:

“Based on recently applied models for the context in Yemen, we are estimating in a worst-case scenario with no mitigation measures 28 million people infected, at least 65,000 deaths, and around 494,000 hospitalisations. It is a deeply alarming situation, highly catastrophic if people do not make serious behavioural changes [and] if we do not make some course corrections.”

The policies of the United States are deeply implicated in Yemen’s suffering, through the sale of billions of dollars in munitions to Saudi Arabia and other countries that have intervened in the civil war.

U.S. Secretary of State Mike Pompeo has urged the United Nations to reduce the aid it delivers to areas controlled by the Houthis. A New York Times report quoted an unnamed diplomat as saying that Pompeo, at a 2019 conference in Warsaw, said the coalition forces should kick the stuffing out of the Houthis, although Pompeo, according to the unnamed diplomat, “used an earthier noun than stuffing.”

In March 2015, Saudi Arabia led a military coalition of nine Arab states to intervene in a conflict raging in Yemen. The coalition said it was acting to restore Yemen’s ousted president, Abdrabbuh Mansour Hadi, to power.

But professor Shireen Al-Adeimi, a Yemeni who teaches at Michigan State University, contends the coalition’s real motive was to gain control of the Bab el-Mandeb Strait, a maritime “chokepoint” through which millions of barrels of crude oil flow each day.

The Saudi warmakers anticipated a brief war, dubbing it “Operation Decisive Storm,” and expecting to quickly overwhelm the rebellious fighters, called the Houthis. They believed the rebels would be no match for the combined military strength of Saudi Arabia, the United Arab Emirates, and the seven other Arab countries in the coalition, who were collectively backed by the United States and the United Kingdom.

But the war dragged on for months, turning into a stalemate, with disastrous consequences for Yemeni civilians. The Saudis asked the United States for massive increases in the supply of weapons. By the end of 2015, Human Rights Watch documented, the U.S. had sold Saudi Arabia 600 Patriot Missiles, a million rounds of ammunition, $7.8 billion in various weaponry, four Lockheed Littoral Combat Ships, and 10,000 advanced air-to-surface missiles, including laser-guided bombs and “bunker busting” bombs.

The Obama Administration, notes Al-Adeimi, sold Saudi Arabia $115 billion of weapons and provided additional support in the form of targeting assistance, training, and maintenance of aircraft and vehicles. The Trump Administration has continued to support Saudi Arabia, including its 2017 pledge to sell $350 billion in weapons to the repressive regime over a ten-year period. President Donald Trump cited this lucrative package in declining to take action against Saudi Arabia for murdering Washington Post journalist Jamal Khashoggi in 2018.

The United States has also provided cover for Saudi Arabia in the U.N. Security Council, which passed a resolution in April 2015 that demanded an end to Yemeni violence but made no mention of the Saudi-led intervention.

Al-Adeimi understands the difficult position the United Nations is in, since it depends heavily on donations from Saudi Arabia, the United Arab Emirates, and the United States. But she is dismayed by what she calls its “all-siding” the war—addressing the conflict as though it were between evenly matched opponents.

“One hundred thousand Yemenis have been killed,” Al-Adeimi says. “The Yemenis don’t have even one plane, much less fighter jets and warships!”

On March 27, the Trump Administration suspended aid to Houthi-controlled areas of Yemen, where 70 percent of Yemen’s population live. It accuses the Houthis of obstructing aid deliveries. Meanwhile, the Saudis are enforcing a blockade on all of Yemen’s land, sea, and airports, forcing its population into dependence on relief organizations.

Aisha Jumaan, a Yemeni who works as an epidemiologist in Washington State, says the effect of these aid cuts was immediate. She worries that Yemen may be manipulated by donors who can threaten to withhold desperately needed food, medicine, water, and fuel.

Jumaan and her organization, the Yemen Relief & Reconstruction Foundation, along with Oxfam, the Norwegian Refugee Council, and the Yemeni Alliance Committee, are urging the United States to reconsider its aid suspension, to give Yemen all possible resources to prevent and respond to COVID-19.

In May 2017, the Saudi-led coalition’s war against Yemen had clearly gone on longer than predicted. Crown Prince Mohammed bin Salman appeared on national television and asked the Saudis to be patient. He said having a dialogue with the rebels was not possible, so the coalition was waiting them out, adding “Time is in our favor.”

Three years later, the war is still dragging on, and the flow of weapons from the United States continues unabated. Even now, in a shipyard in Marinette, Wisconsin, Lockheed Martin has a multibillion-dollar contract to build four Littoral Combat Ships, which will be delivered to Saudi Arabia.

In 2019, the investigative website Bellingcat reported that eleven individual U.S. states plus the District of Columbia have each exported more than $100 million worth of weapons to Saudi Arabia and the United Arab Emirates. Altogether, the United States provided up to $6.8 billion in weapons including bombs, rocket launchers, and machine guns through March 2019.

Some of these weapons may be linked to war crimes. Identifying marks on U.S. bombs used in the 2018 Dahyan bus bombing, which killed forty children and eleven adults, linked back to a Lockheed Martin plant in Pennsylvania.

On a monthly basis, Saudi Arabia’s state-owned shipping company, Bahri, sends cargo ships to Wilmington, North Carolina, the Port of Baltimore and other U.S. ports, to collect bombs, grenades, cartridges, and defense-related aircraft. The United States also supplies weapons to Bahrain and other countries actively participating in the Saudi-led war against Yemen.

On April 8, the Saudi-led coalition declared a unilateral two-week ceasefire, expressing concern about the spread of COVID-19. But within days, the Houthis were battling groups loyal to the coalition, which retaliated with dozens of air strikes. The Houthis had already issued their own proposal for ending the war and insisted that no durable peace could be achieved without the withdrawal of foreign troops and a termination of the blockade.

When the two-week ceasefire expired, a spokesperson for the Saudi-led coalition announced a month-long extension. Yet there were numerous reports of continued coalition air strikes. The Saudis may want to extricate themselves from the war, but so far they haven’t stopped the bludgeoning air strikes or lifted the blockade.

A version of this article first appeared in The Progressive Magazine. https://progressive.org/magazine/our-disaster-kelly/