Organizations Across the Political Spectrum Resoundingly Agree: Cold War with China is Dangerous and Self-Defeating 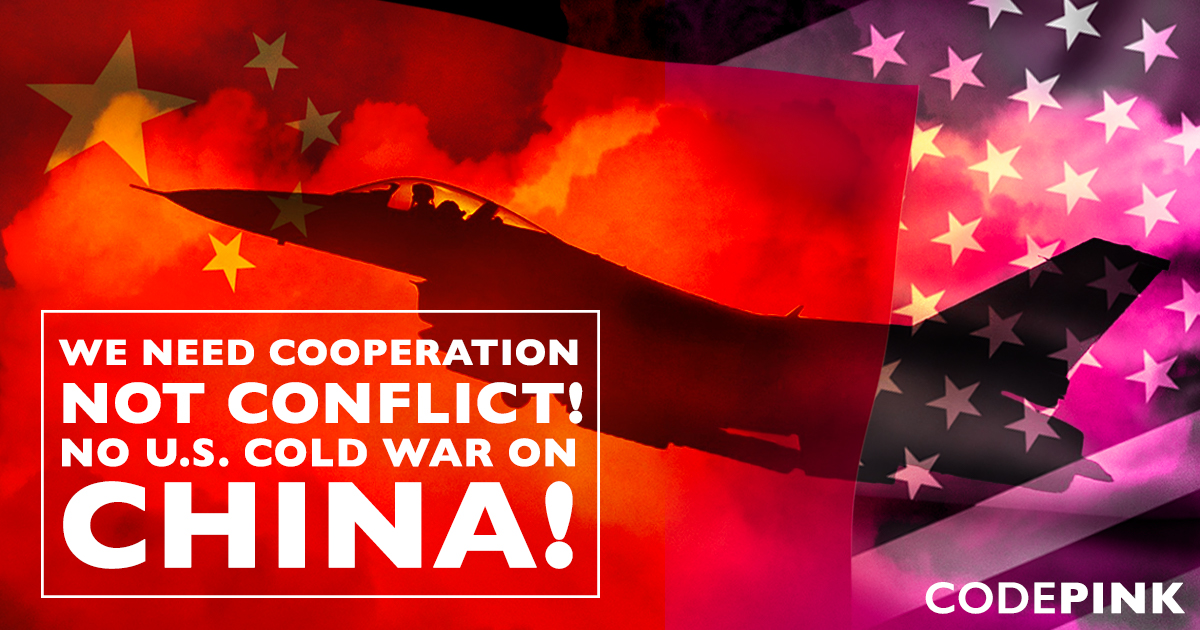 May 17, 2021 — Today, CODEPINK joined a transpartisan coalition of over 65 organizations in sending a joint statement to Congress and the Biden administration expressing deep concern about the U.S. government’s demonization of and confrontational approach to China.

In response to the Senate Foreign Relations Committee’s recent vote to advance the Strategic Competition Act of 2021, which is reported to receive a Senate floor vote this month, civil society groups from across the political spectrum joined in coalition to demonstrate the consensus on opposition to the growing Cold War mentality driving the U.S. approach to China. This legislation risks institutionalizing a framework that is hauntingly familiar to the way Democrats joined Republicans in the late 1990s to pass the Iraq Liberation Act that paved the way for the U.S. invasion of Iraq in 2003.

The Strategic Competition Act, as the letter explains, frames China and its economic development as a “malign influence” and as the pivotal existential threat to U.S. prosperity and security; this dangerous zero-sum mentality fuels more violence, including racism, xenophobia, and an increasingly destabilizing arms-race.

The full statement is available here.

“The Strategic Competition Act’s text identifies “China” 256 times and mentions “the PRC” (People’s Republic of China) 220 times, but includes no provisions for U.S. cooperation or respectful relations with China,” said Madison Tang, coordinator of the China Is Not Our Enemy campaign. “This reinvigorated wave of McCarthyism, Yellow Peril rhetoric, and military funding focused solely on “containing” and destabilizing an emerging China will only escalate tensions and increase the potential for war, while further emboldening Sinophobic violence against Asians and Asian Americans within the U.S.”

Perhaps most alarmingly, the Strategic Competition Act would increase U.S. military aggression towards China by providing for an exorbitant $655 million in funding for foreign militaries in the Indo-Pacific region and $450 million for the Indo-Pacific Maritime Security Initiative. It would also provide for at least $270 mill for each year from 2022-2026 for ongoing and new programs to fund anti-China media and journalism.

Jodie Evans, co-founder of CODEPINK, said, “The alleged ‘threat’ of China is being used as the sole justification for the increase in the Pentagon budget, as well as for the additional military funding for the Western pacific region in the Strategic Competition Act. Don’t let the State Department manufacture consent for war and more exorbitant military spending by falsely positioning China as an enemy.”