Open the Gates of Guantanamo

July 1 marks the first day in office for Clifford Sloan, newly appointed Guantanamo closure envoy. Shortly after his May address on counterterrorism, President Obama appointed Sloan to the Office of Guantanamo Closure in the State Department, a position that had been vacant since January. The appointment and reopening of the office is the only concrete step the President has taken concerning Guantanamo since his May speech. With over 100 of the 166 remaining prisoners on a hunger strike and over 40 being brutally force-fed, great hopes are being placed on Mr. Sloan to break the impasse.

A key first step in closing Guantanamo is releasing the 86 prisoners who have already been cleared for release. This is something the President can do by invoking the waiver system that Congress put in place. The Secretary of Defense must determine that risk of the detainees returning to militant groups is low and that the transfer is in the interest of national security, then notify Congress of the release 30 days in advance. So far, the Obama administration has never exercised this authority.

A particular problem in the transfer of cleared prisoners is the case of Yemen. Of the 86 cleared prisoners, 56 are Yemeni. President Obama banned the release of Yemeni prisoners in 2010 after a man trained by militants in Yemen attempted to blow up a U.S.-bound plane in 2009 with a bomb concealed in his underwear.

In his May speech, President Obama announced that he was lifting this self-imposed ban. Congress immediately tried to block the President by passing an amendment to the National Defense Authorization Bill (NDAA) on June 14 that prohibits using Defense Department funds to transfer detainees to Yemen for one year. The amendment, sponsored by Rep. Jackie Walorski (R-Indiana), passed 236 to 188.

But it is not law, since it has not been passed by the Senate.

Instead, the Senate is trying to ease the way for the President to not only release the cleared prisoners, but close the entire prison. The Senate Armed Services Committee passed a bill on June 13 that would allow the Pentagon to send detainees to the United States for medical treatment, sustained detention, and prosecution. Senator Carl Levin (D-Michigan) inserted the provisions into the Senate version of the 2014 NDAA, and the Senate should be voting on it in the fall.

In a meeting with CODEPINK, Senator Levin’s chief of staff David Lyles suggested that activists focus on helping the bill pass the Senate. But he also emphasized that while all of these issues are being played out in Congress, we should not lose sight of the fact that the President still has the executive authority to transfer the detainees cleared for release and that we should pressure him to do so.

Activists throughout the US have been doing just that. Various petitions to the President have gathered more than 400,000 signatures.  The most prominent was signed by Lt. Colonel and former Chief Prosecutor at Guantanamo, Morris Davis, and promoted by Witness Against Torture.

People have rallied and held vigils in cities and towns, flooded the White House and Southern Command with phone calls and, by the hundreds, fasted in solidarity with the hunger strikers.  The faith community has called Guantanamo a deep moral wound, and 38 senior religious leaders sent the President and Congress a letter calling for the closure of Guantanamo. 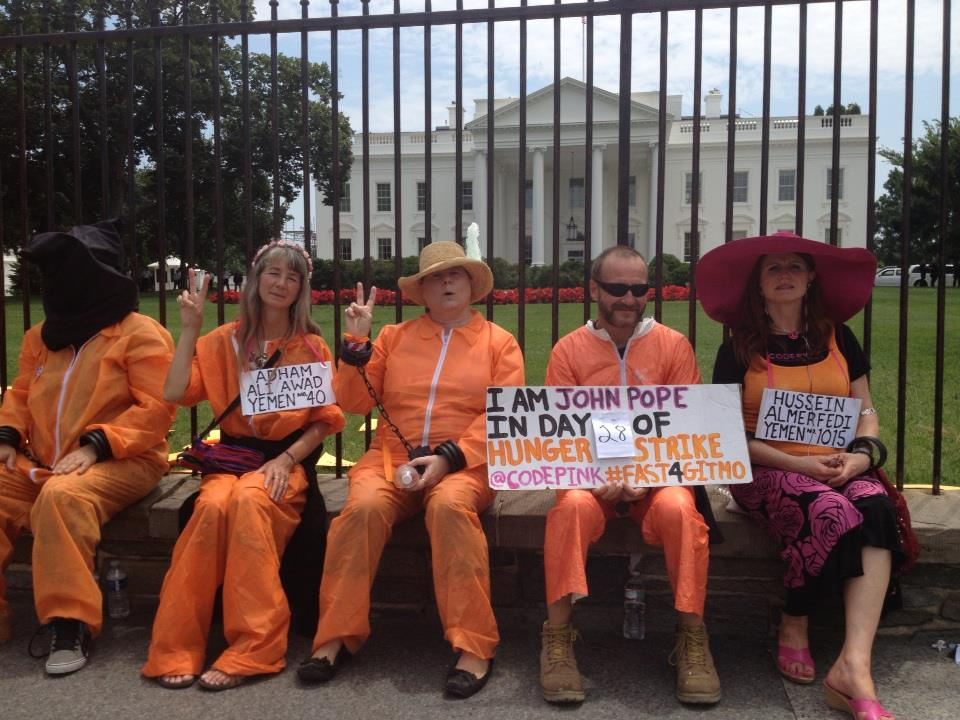 Most dramatically, several U.S. citizens — among them military veterans — are now deep into open-ended fasts, risking their health and even their lives in their effort to see Guantanamo closed.  In a dramatic action at the White House on June 26, Diane Wilson, 57 days into her hunger strike, jumped over the White House fence. Twenty-two others, all dressed in orange jumpsuits, were also arrested by refusing to leave the White House fence.

Amnesty International and other organizations are lobbying senators who are on the fence about closing Guantanamo. CODEPINK (link) is collecting signatures to hand-deliver to the new envoy Clifford Sloan (link). Witness Against Torture is recruiting new people to join the US solidarity hunger strike. And CloseGitmo.net is keeping people up-to-date on activism around the country.

"Guantanamo has become a symbol around the world for an America that flouts the rule of law," President Obama said. With the hunger strike reaching 150 days on July 6, the lives of these prisoners—along with our nation’s reputation, hangs in the balance.

Medea Benjamin is co-found of codepink.org and globalexchange.org. She is the author of Drone Warfare: Killing by Remote Control.