One Billion Rising Revolution - Dance Across the Golden Gate Bridge 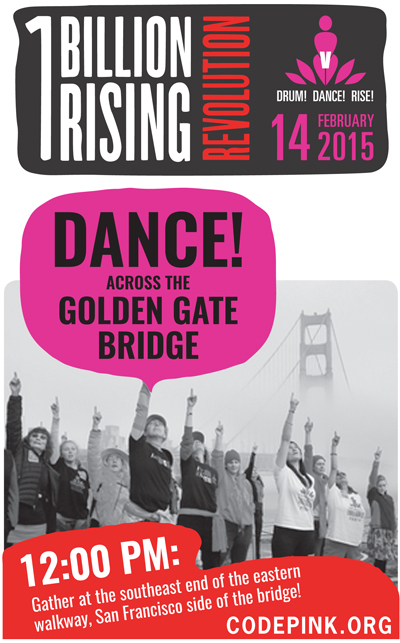 Activists Across the Globe Mobilize for One Billion Rising: Revolution Campaign

San Francisco: On February 14, 2015, at 12:00pm, for a third year, CODEPINK will join with activists around the world for ONE BILLION RISING: REVOLUTION in a Dance Across the Golden Gate Bridge. The campaign will build upon the energy and momentum that was created on February 14, 2013 and 2014 when one billion activists in over 200 countries and territories came together to rise and dance and demand an end to violence against women and girls, in the biggest mass actions of their kind in human history.

Activists will gather outside the Visitor’s Center at the southeast end of the eastern walkway of the Golden Gate Bridge at 12:00pm on February 14, 2015.

Last year, February 14, 2014 was a call to women, men, and youth around the world to gather safely outside places where they are entitled to justice – court houses, police stations, government offices, school administration buildings, work places, sites of environmental injustice, military courts, embassies, places of worship, homes, or simply public gathering places where women deserve to feel safe but too often do not.

This year, One Billion Rising is launching its third campaign with One Billion Rising: Using the tagline, “Drum, Dance & Rise,” women, men and youth will plan, lead, and participate in actions, dances and artistic events, and rallies —or Risings—in hundreds of countries.

One Billion Rising: Revolution is an escalation of the first two stages of our campaign – One Billion Rising and One Billion Rising for Justice. We’ve danced. We’ve demanded justice. Now we are demanding CHANGES. We must harness our creativity and energy.We will highlight, create and envision new, brave and radical artistic initiatives to bring in the new revolutionary world of equality, dignity and freedom for all women and girls. There is nothing more powerful than art as a tool for transformation.

To learn more about One Billion Rising: Revolution – Dance Across the Golden Gate Bridge, e-mail the organization at [email protected]

About One Billion Rising

One Billion Rising was the biggest mass action to end violence against women and girls in human history.  The campaign, launched on Valentine’s Day 2012, began as a call to action based on the staggering statistic that 1 in 3 women on the planet will be beaten or raped during her lifetime. With the world population at 7 billion, this adds up to more than ONE BILLION WOMEN AND GIRLS.  Visit www.onebillionrising.org