Once Upon A Time, I Was the Boss of Medea Benjamin

By Dana BalickiOctober 30, 2013
Original post can be found on DanaBalicki.com. 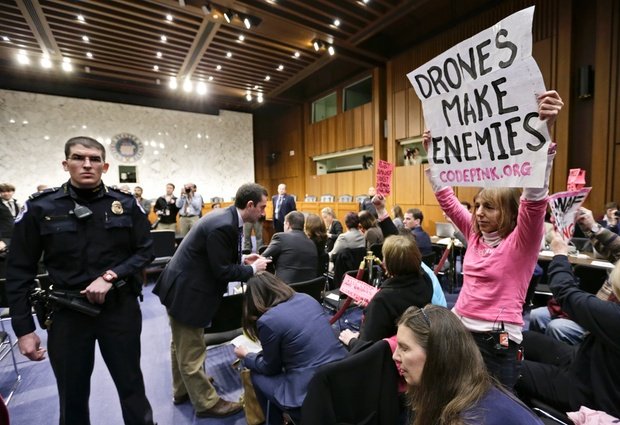 The other night I had the honor of introducing my dear friend and teacher, Medea Benjamin, to an audience of peacemakers at an award ceremony where she was being honored. Here’s what I actually said embellished a bit with what I would’ve said if I could’ve rambled on for longer.

Hi everyone, my name is Dana Balicki, I am activist, a certified life coach, a communications strategist and once upon a time I was the boss of Medea Benjamin. [crowd laughs, of course...]

Follow me back in time for a moment as I recall the first time I ever saw Medea. It was 2000, I was in college in northern California, and I’d spent the whole day volunteering at the Bioneers Conference in Marin. My job had been to help with stage managing and so the whole day I was backstage with the luminaries who were presenting their ideas/visions/innovations. At one point I was sitting between Alice Walker and Paula Gunn Allen going “oh hey, no big deal, just chatting with Alice and Paula…[OMGOMGOMG].” My heart would pulse and whir Vita-mix style in my chest. The spinning actually making heat.

I took that big burning heart to a Green Party Super Rally that evening. I was going to be able to vote in an election for the first time that year. My friends and I were way in the back…and I don’t remember Ralph Nader hardly at all. What I do remember (besides PattySmithHolyShit!) is a tiny woman taking the stage–who was she? I had to look at the program to figure it out. Medea Benjamin. Huh.

Could she even see over the podium? I wondered.

She could. And oh did she. She started her fiery oratory and that chest heat returned. We all felt it. I wanted to vote for her. Like right then. Cast my ballot. I forgive her now for her bad haircut. It was 2000.

Fast forward four years and I’m just out of college and being hired to work for CODEPINK. In those in-between years we had Bush, 9/11, the War on Terror, yellow cake, WMDs, lies. So many lies. So much fear-mongering. My job was to help them project manage the book that would be Stop the Next War Now: Effective Responses to Violence & Terrorism. My very first conversation with Medea was over the phone and she told me that she knew this was a big job, with a short window for execution and that I just needed to tell her what to do, I needed to BE THE BOSS OF HER.

I was terrified. And up for it. I didn’t want to do anything else with my life except end war, and these women seemed like they had something key figured out. I worked for CODEPINK for the next near seven years. The rest of my twenties.

There is so much that I learned from this time, these women, this history, the movement, the exhaustion, the passion…so much I could write a book, or at least an epic essay. Or maybe a series of short stories. Either way, here are FIVE lessons I hold dear.

1) The best time for a salsa dance party is at midnight and only after you’ve been leading a boisterous gaggle of CODEPINKers in an all day march through the streets of Washington, DC and regurgitated heartfelt talking points to dozens of reporters, made at least 3 banners, formatted the fliers and songsheets for the next day, sent out a national email alert (after several rounds of up-to-the-minute updates) and have ALL THE TIME AND ENERGY IN THE WORLD for a dance party. Why? Because Medea said so. And really, who can say no to Medea? And really, who should say no to dancing, ever?

2) If you can’t carry a tune, just mouth the words. Medea is an epic songstress, so there’s no half-stepping. This rule still counts if you are in jail with her, but depending on how long you’re held she might be lenient. Just don’t sing too loud.

3) Know your numbers and your facts. These are important, and yet they are never to replace emotion or the power of personal story. Deep human connection is in fact what we are playing for when we shifting war culture. Numbers and facts are tools. It’s the emotion, the connection to the other, the personal narrative that makes it mean something.

4) Never let go of your banner. Seriously, don’t. And if it gets wrestled out of your hands, make sure to have your message written on your shirt, and have a back up banner stuffed in your pants, and in the lining of your purse, and… Never underestimate the photo opp as you deliver your message.

5) This last one comes from the very beginning of my time with CODEPINK, when we were working on the book. It was our first big work session together—me, Jodie Evans (the other CP cofounder) and Medea. We circled up at the CP HQ office in Venice at Jodie’s kitchen table looking at all of moving pieces of the book, the contributors, the editors (paid and volunteer), and the deadlines. I was thrilled for the opportunity to all be in the same place—the four-page long to do list would get done, by gawd it would! And then as we settled in, we got an email from our friend, ally and intrepid journalist, Dahr Jamail. He was in Fallujah and the US siege was underway. He told us that no one was reporting how bad it was—the thousands fleeing with nothing into the desert as winter approached rapidly, the evidence of chemical weapons being used, the havoc and terror spread wide and deep across Fallujah and innocent Iraqis.

Medea and Jodie immediately jumped into action. One last, longing look at the deadlines and lists, and I quickly stacked our files in the corner of the table out of the way. We began to draft a national email alert, set up a donation page, connect with various doctors and friends in Iraq to set up a delivery of money, supplies and medicines. I remember digesting the worry that we wouldn’t make our book deadlines and I would fail at my job. And I remember letting it go. I was being shown true priorities.

Once you learn that lesson, you cannot unlearn it. For that, I am supremely grateful. Thank you Medea. Thank you crazy, amazing women (and men) in pink. My twenties were the least I could give for what I received in return.