OMG. Did you hear what Ilhan Omar just did? 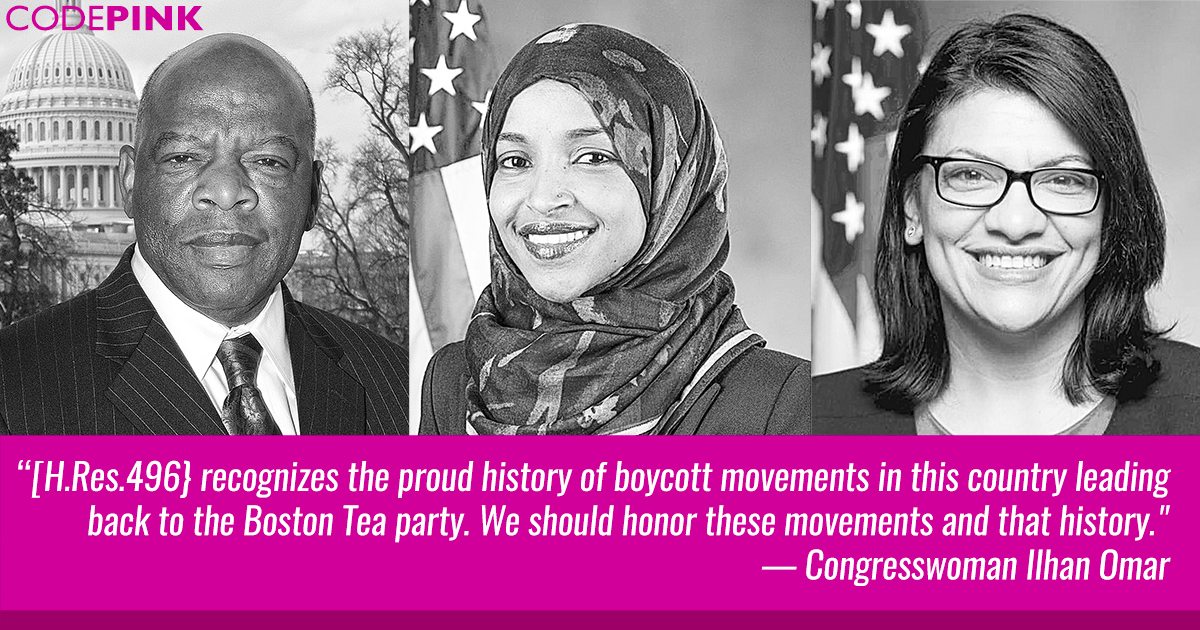 This is HISTORIC! Rep. Ilhan Omar — along with Reps John Lewis and Rashida Tlaib — just introduced the first-ever congressional resolution supporting the Palestinian grassroots movement to boycott Israel in order to pressure the country to abide by international law and respect the human rights of Palestinians.

Introduced in 2005, the Boycott, Divestment, and Sanctions (BDS) movement is now a key strategy for promoting Palestinian rights. Unfortunately, Israel, seeking to maintain it’s status quo of occupation and apartheid, treats BDS as public enemy #1, as do many pro-Israel members of the U.S. Congress.

Speaking today to the House Committee on Foreign Affairs, Rep. Omar described how H.Res.496 “recognizes the proud history of boycott movements in this country leading back to the Boston Tea party. We should honor these movements and that history." Take action now: Contact your member of Congress and ask them to cosponsor H.Res.496, the resolution “affirming that all Americans have the right to participate in boycotts in pursuit of civil and human rights at home and abroad, as protected by the First Amendment to the Constitution.”

One of the most incredible aspects of this resolution is that it is co-sponsored by Rep. Lewis, a long-time civil rights leader and 32-year-long Congressmember known for his strong support for Israel. Having Rep. Lewis as part of this resolution sends a clear and direct statement that the right to boycott must be protected, regardless of one’s position on the Israeli/Palestinian conflict. This is a game-changer!

H.Res.496 will serve as a counterweight to another congressional resolution — H.Res.246 — which condemns the BDS movement. While H.Res.246 is non-binding and doesn’t prescribe specific punishments for those who boycott Israel, it makes false claims. It says that BDS is antisemitic, which it is not, and it says that the BDS movement opposes the two-state solution. In fact, BDS doesn’t take a position on a one-state or two-state solution, instead, it is a movement advocating for human rights for all and for adherence to international law.

Contact your representative in the House. Tell them to vote no on H.Res.246 and instead join Congresswoman’s Ilhan Omar’s historic resolution affirming our right to boycott for freedom, equality, and justice.