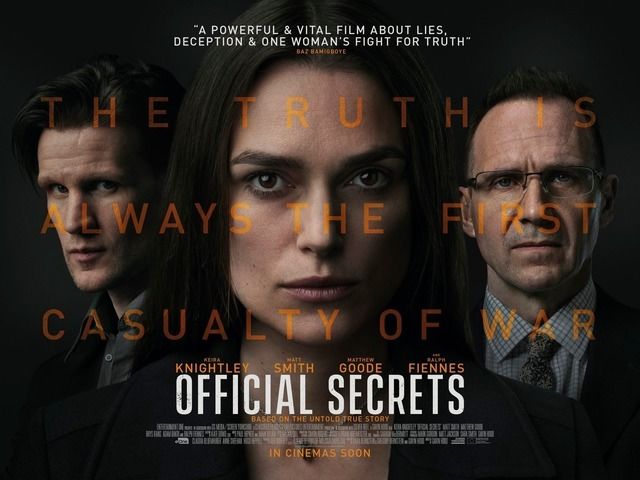 This week launches the new film “Official Secrets” about the British whistleblower Katharine Gun who exposed the lies which influenced the U.K. to join the U.S. coalition to invade Iraq in 2003.

CODEPINK was created in opposition to the war in Iraq. It is in a unique partnership with 360 Degree Communications to provide educational forums to make sure the truth about the war is told.

You can be part of the truth-telling experience by attending one of our forums, listening to a live radio interview with Pentagon Papers whistleblower Daniel Ellsberg, writing to whistleblower Chelsea Manning and her publisher Julian Assange, and signing the petition calling for the firing of war criminal John Bolton.

Chelsea Elizabeth Manning, born Bradley Edward Manning, was a U.S soldier convicted in July 2013 for a series of offenses including violations of the Espionage Act, after leaking more than 700,000 classified files of diplomatic cables and other documents to Wikileaks, widely known as “Cablegate”. Included in these were videos of the massacre of civilians in both the Afghanistan and Iraq wars. Dishonorably discharged from the Army, Manning had already served 1,294 days in prison when she was sentenced in August 2013 to 35 years confinement with the possibility of parole in 8 years. Manning is a transgender woman and had suffered excessively harsh treatment during her detention in Quantico. After sentencing, she said in a statement, "I am Chelsea Manning. I am a female...”

Julian Assange, founder of Wikileaks in 2006, it offers journalist and others an anonymous, secure online submission system to reveal war crimes, the inner workings of governments, human rights abuses, corporate crimes, and much more. It was one of the most important tools for journalists and whistleblowers.

*NOTICE: All letters are read by Belmarsh and security. Postcards are not allowed

John Bolton has never met a military conflict he didn’t want to get involved in. He advocates a foreign policy that exaggerates threats, belittles diplomacy, shows contempt for international institutions and is quick to use violence. He was a key instigator of the Iraq war and has no regrets, and now he is hell-bent on destroying diplomacy with North Korea and going to war in both Iran and Venezuela. For the sake of the entire world, we call on President Trump to FIRE BOLTON. Sign the petition.

Film ‘Official Secrets’ is the Tip of a Mammoth Iceberg