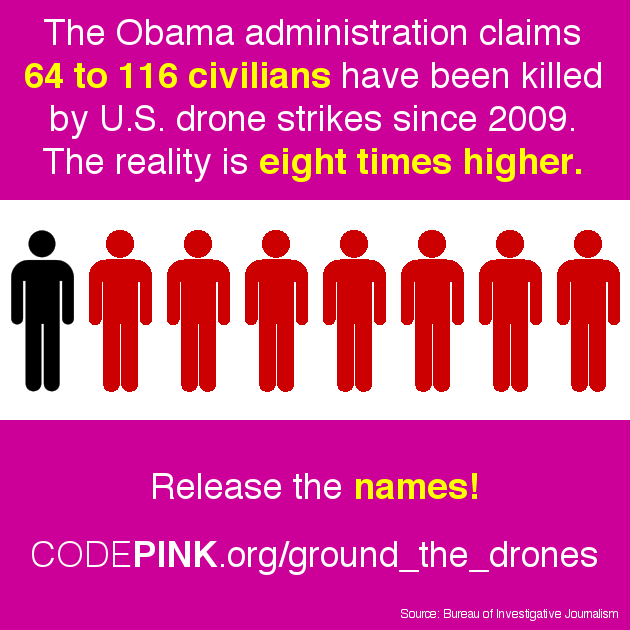 Late last week the Obama administration released shockingly underreported numbers claiming that the U.S. government has caused only 64 to 116 civilian deaths by drone strikes. These numbers simply don’t add up. Independent organizations estimate that the number of civilian deaths is closer to 8 times that amount!

Take action: Call on the Obama administration to release the names of the civilian drone strike victims as well as its methodology for determining who is a civilian.

At CODEPINK, we agree that the numbers are underestimates of the actual civilian death toll. It is impossible to verify the government’s numbers when the administration refuses to reveal their methodology or information on specific strikes. “You can’t grade your own homework,” as one political analyst noted.

We know as a fact that the Obama administration is automatically categorizing every adult male over 18 killed by drones as an enemy combatant – and this is outrageous. Our Yemeni friend Faisal bin Ali Jabar wondered in a powerful article, “was my family counted?” The lack of transparency shows that the Obama administration is using civilian casualty numbers as a political tool to normalize drone strikes.

In addition to underestimating civilian casualties, the government statistics fail to capture the tens of thousands of cases of lost limbs, partial or total paralysis and other psychological or significant permanent injury caused to civilians by drone strikes. The damage done to civilian survivors of drone strikes is often brutal, devastating and lifelong and is completely unaccounted for in the government statistics released last week.

Join us in calling on the Obama administration to release the names of civilian drone strike victims and to be transparent on the methodology that led to their numbers!