by Medea Benjamin and Charles Davis 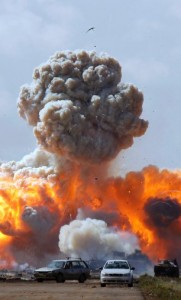 His lines may be better delivered, but Barack Obama is sounding – and acting – more like the heir to George W. Bush than the change-maker sold to the public in his award-winning ad campaign. Indeed, when not sending billions of dollars to repressive governments across the globe, the great liberal hope is authorizing deadly drone strikes and military campaigns in Afghanistan, Pakistan, Somalia, Yemen and now, in his most morally righteous war yet, Libya.

Strutting out to a podium before an audience of uniformed military personnel – wonder where he got that idea from – a confident, some would say cocky, American president offered a fierce albeit belated speech justifying another preemptive war against a country that posed no threat to the United States. And if you closed your eyes, you could almost hear that faux-Texas drawl.

“As Commander-in-Chief, I have no greater responsibility than keeping this country safe,” the president declared, adopting his predecessor's favorite title for himself. “I’ve made it clear that I will never hesitate to use our military swiftly, decisively, and unilaterally when necessary to defend our people, our homeland, our allies and our core interests.”

Put another way, President Obama says he will only start a war – without consulting Congress, much less the public – when it is absolutely necessary for defending the “homeland” or for, you know, whatever he deems an “interest.”

Enter Muammar Gaddafi, a caricature of a tyrant who the Obama administration just a matter of weeks ago was looking to sell $77 million in weapons, including more than 50 armored troop carriers. Back then – mid-April – Gaddafi was a thuggish but reliable client in his old age. And he happened to rule over a country that has the largest oil reserves in Africa.

But a few short weeks ago, Gaddafi became unreliable – a public relations nightmare – when he started using the weapons he purchased from his erstwhile allies against his own people. Like Saddam Hussein before him, he became a liability.

So now Obama believes Gaddafi to be a “tyrant” who has lost his “legitimacy” – as if there was anything “legitimate” about his previous 42 years of dictatorial rule. On Monday, the president argued war was necessary to prevent Gaddafi from massacring rebel forces and their supporters in Benghazi. Such a massacre “would have reverberated across the region and stained the conscience of the world,” said the war president. “I refused to let that happen.”

I – me – the imperial president. Cue the commander-in-chief landing on an aircraft carrier.

But if the threat of a massacre is what spurs President Obama to action, what are we to make of his reaction to Israel’s massacre of more than 1,400 Palestinians during Operation Cast Lead in Gaza, or what Amnesty International calls “22 days of death and destruction? Giving Israel an additional $30 billion in American weapons is a rather curious response, no?

And what about the hundreds of civilians killed by drone attacks in Pakistan since Obama took office – as many as 1,850 according to the New America Foundation? In early March, the very administration cloaking its new war in moralizing rhetoric carried out a massacre of 40 Pakistani civilians – a massacre the president who authorized the attack couldn't even be bothered to comment on.

Right now, the Obama administration is actively supporting brutal regimes in Yemen, Iraq and Bahrain – to name a few – where protest movements are being violently suppressed on the American taxpayers' dime. And the Obama administration is selling $60 billion in weapons to the Saudis, who not only oppress their own dissidents but recently occupied neighboring Bahrain and violently cracked down on peaceful protesters there with the U.S.'s stamp of approval.

So if one thing's clear, it's that the U.S. government is fine with tyranny – when it's “pro-American” (business). Fancy rhetoric aside, there is no “freedom agenda.”

Speaking to reporters this week, Obama's Deputy National Security Advisor Denis McDonough conceded as much, saying that the White House doesn't “make decisions about questions like intervention based on consistency or precedent.” Rather, “We make them based on how we can best advance our interests in the region.”

And as history professor and war supporter Juan Cole helpfully notes, the rebels control significant swaths of oil-rich territory and have taken “key oil towns” thanks to the U.S.-led bombing campaign – of 200 cruise missiles fired so far, 193 have been fired from American warships. They are also on the verge of taking 80 percent of the Buraiqa Basin, writes Cole, which “contains much of Libya's oil wealth.”

Bingo: We just found “our interests.” And unsurprisingly, they don't involve protecting innocent people from being killed so much as they do protecting the natural resource on top of which they're dying – and then having the freshly liberated locals pick up the tab for American contractors to rebuild everything American missiles destroyed.

Major General Smedley Butler had it right: war is a racket.

But even assuming Obama has the best of intentions – with which the road to hell is paved, mind you – U.S. intervention in Libya is more likely to do harm than good. Besides the inevitable “collateral damage,” meaning widowed mothers and orphaned children, war sets off an unpredictable chain reaction of evil – evil that no side has a monopoly over.

Indeed, The Los Angeles Times reports that while the intervention is sold as in defense of human rights, the Libyan rebels on whose behalf the U.S. is intervening are actively rounding up hundreds of their perceived political opponents and imprisoning them without charge in Gaddafi's former torture chambers. Those being rounded up are primarily black immigrants, with rebel spokesman Abdelhafed Ghoga telling the paper that suspected Gaddafi mercenaries who don't voluntarily turn themselves in will be subjected to extra-judicial “justice” (read: murder) for being “enemies of the revolution.” If they seize the country, who will stop roundups – and massacres – in Tripoli and elsewhere of those deemed to be supporters of the Gaddafi regime, perhaps for no reason other than the color of their skin?

U.S. official have publicly acknowledged an al-Qaeda presence among the rebels, bringing to mind U.S. support for the Afghan mujahideen in the 1980s. And with the self-proclaimed leadership consisting of former top-level Gaddafi cronies who had no problem with the regime's human rights abuses four weeks ago, those lionizing the rebels – and suggesting the U.S. illegally arm them -- should take a closer look at who the U.S. and its allies are preparing to put in power when Gaddafi's gone.

The Obama administration and supporters of the war -- who a month ago couldn’t tell the difference between Benghazi and Baghdad -- portray the intervention in Libya as a simple morality tale, with evil on one side and good on the other. But the reality is more nuanced than the applause lines the president laid out in his speech. In the real world, peace is rarely achieved by dropping bombs and installing the most avowedly “pro-American” locals you can find in power. Just look at Afghanistan and Iraq, where George Bush started wars that Barack Obama has only continued – and in the case of the former, escalated.

“Some nations may be able to turn a blind eye to atrocities in other countries,” Obama said this week. “The United States of America is different.” And credit where credit’s due, he's right: From Gaza to the Arabian peninsula, Obama doesn't stand idly by while others carry out atrocities – he funds and arms those carrying them out.

And just like Bush, he doesn't let his hypocrisy get in the way of a good war.

Charles Davis (http://charliedavis.blogspot.com) is an independent journalist who has covered Congress for NPR and Pacifica stations across the country, and freelanced for the international news wire Inter Press Service.