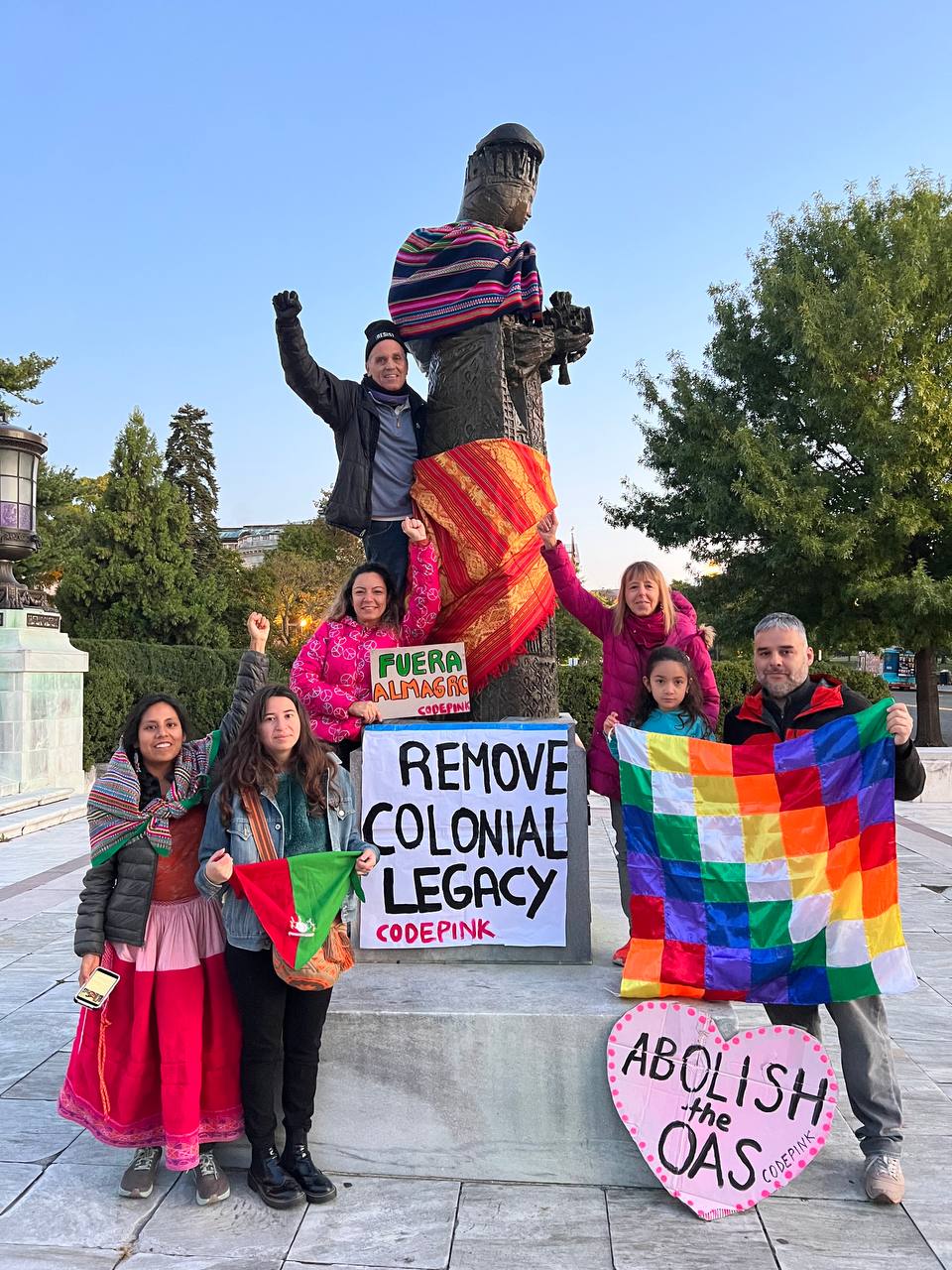 On Monday October 10, when the nation celebrates Indigenous Peoples’ Day,  D.C.-based peace activists transformed a prominent statue of Queen Isabella I of Castile by dressing her in traditional indigenous garments. The statue stands in Washington, D.C.’s Foggy Bottom neighborhood at the entrance to the headquarters of the Organization of the American States (OAS). Queen Isabella sponsored Christopher Columbus’ 1492 expedition that led to the extermination of millions of indigenous peoples, laying the foundation for Spanish colonialism and the trans-Atlantic slave trade.

The statue was gifted to the OAS in 1966 by the fascist leader of Spain, Francisco Franco. General Franco clearly looked to Queen Isabella as the embodiment of his own ideals, and of the right of Christian Europeans to rule as dictators over other peoples. But Franco’s brutal dictatorship of nearly 40 years was only a postscript to the centuries-long holocaust that Queen Isabella unleashed on the people of the Americas.

For the past year, leaders of Latin American and indigenous descent have been calling on the Secretary General of the OAS, Luis Almagro, to remove the statue, which represents the painful and ongoing process of colonization throughout the Americas. “We sent a petition to the OAS signed by many indigenous organizations but Almagro has not even bothered to respond,” said Michelle Ellner from CODEPINK. “We want the OAS to remove this colonial legacy because as Latin America people, this hurts us.”

From the very first contact between Queen Isabella’s expeditionary forces and the Indigenous Taino people they encountered in the Caribbean in 1492, Spain’s purpose was to conquer and enslave them, and to seize their gold and anything else of material value that they possessed. Encouraged by the plunder that her forces returned to lay at her feet, Queen Isabella quickly sent larger fleets and armies to expand her conquest and colonization of the Americas.

The Tainos were just one of thousands of diverse peoples, each with their own culture and language, that had lived in the Americas since time immemorial. But by 1550, almost the entire population of a million Tainos were wiped out by violence, slavery and disease spread by the European conquerors. Scholars now believe that the population of the Americas in 1491 was about 145 million, and that the European genocide wiped out at least 90% of that population within 200 years, including the near-extermination of peoples like the Tainos.

Queen Isabella’s actions would later lead to the development of the transatlantic slave trade, where 12.5 million Africans were ripped from their homes, forced to undertake a perilous overseas journey and then generated massive wealth for their captors. Their descendants faced brutality and horrors for generations, while continuing to provide Europe with countless riches.

Today, the people of the Americas are trying to learn more about their history and make amends for the wrongdoings of those ancestors who invaded, colonized and enslaved people in the Americas. Monuments to past conquests are being torn down across the Americas. After being glorified for centuries as a symbol of European superiority, these statues are now seen as a symbol of repression that are particularly hurtful and insulting.

In Bolivia, Colombia, Argentina, Venezuela and Chile, statues of Columbus and Isabella have been splattered with blood, dressed up as Indigenous leaders, and/or torn down. In Barbados, an angry man took a sledgehammer to the marble Columbus statue. In Mexico City, a prominent statue of Columbus was removed in 2020 from the city’s Paseo de la Reforma and will be replaced by a pre-Columbian statue of an Indigenous woman, known as the Young Woman of Amajac. In the United States, a statue of Isabella and Columbus that stood in the rotunda of the State Capitol of California in Sacramento since 1883 was removed in 2020. A bitter controversy continues in Philadelphia, where the Columbus statue has been enveloped in a wooden box, painted in the colors of an Italian flag, while the city decides what to do with it.

According to Monument Lab, while 36 Columbus statues have been removed, there are still about 150 public monuments to the colonizer. Only Abraham Lincoln and George Washington enjoy a greater presence in American statuary. Beyond statues, there are over 6,000 places in the U.S. named for Christopher Columbus, from the District of Columbia to the Columbia River.

The dressing up of Queen Isabella’s statue at the OAS with a Bolivian aguayo — a fabric symbolizing resistance and struggle commonly used by women in the Andean region of South America — was inspired by a similar action done by the Bolivian feminist group Mujeres Creando in October 2020. The action also calls attention to the OAS’ history of defending U.S. interests at the expense of left-wing governments in Latin America. Most recently, the OAS facilitated the 2019 coup d’état in Bolivia that ousted its first indigenous president and led to the assassination of dozens of indigenous Bolivians by right-wing mobs.

Removing the statue of Queen Isabella from the headquarters of the Organization of American States would be an acknowledgment by the OAS that it is committed to representing and respecting all the peoples of the hemisphere. That must include the peoples who have survived 500 years of colonialism, genocide and slavery, all of which resulted from the conquests launched by Queen Isabella in 1492.

Medea Benjamin is the cofounder of CODEPINK: Women for Peace. Leonardo Flores, a writer and translator, and former director of CODEPINK’s Latin America Campaign.