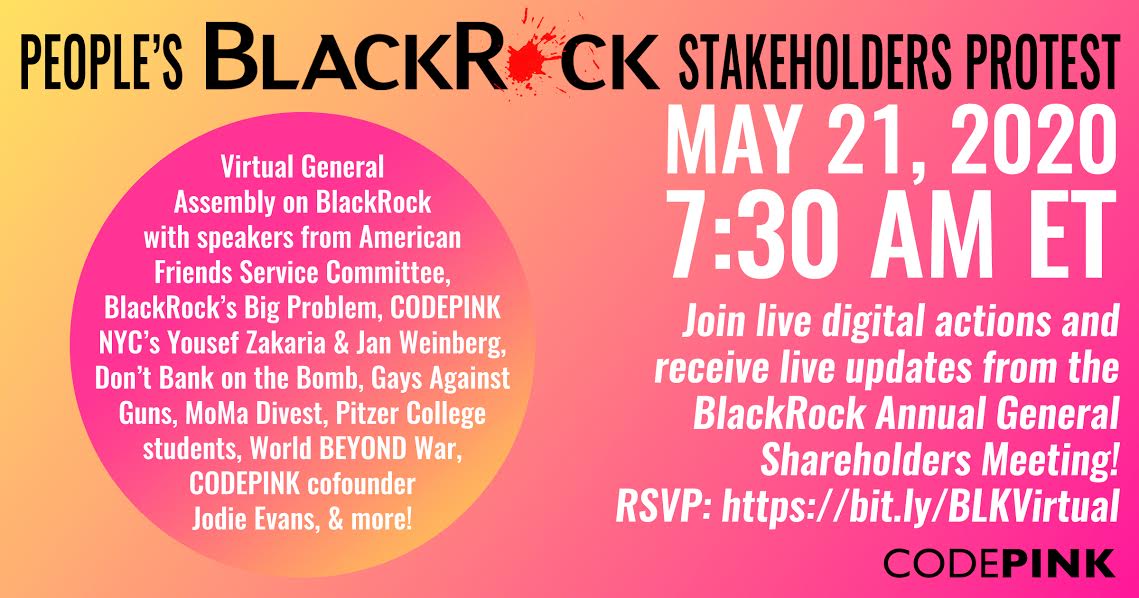 On May 21, we are taking action online as the BlackRock shareholders meeting will be taking place virtually because of the coronavirus pandemic.

BlackRock has billions of dollars invested in weapons companies such as Lockheed Martin, Raytheon, Northrop Grumman, Elbit, and General Dynamics. They position themselves as a socially responsible company, yet they continue to invest in weapons. They are making a killing on killing. The misconduct by weapons companies ranges from groundwater contamination to labor violations and includes overinflated pricing and overbilling the federal government. These companies are flagrantly engaging in bad business practices while misusing limited federal resources.

By investing in weapons manufacturers, BlackRock is propping up wars, brutal conflicts, and human rights violations on a global scale. In addition to contributing to the atrocities of war, all five of these companies have dozens of documented cases of misconduct and the collective misuse of billions of federal dollars. BlackRock even has an iShares fund that exclusively profits from weapons of war.

BlackRock's virtual General Assembly (Shareholder Meeting) is coming up on May 21, and we're determined to make divesting from the war machine an item on the agenda! But we need your help!! Join us on May 21st for live virtual actions and updates from inside the meeting!
Access our Toolkit to take action online and on social media!

For more info send an email to jan@showupamerica.org