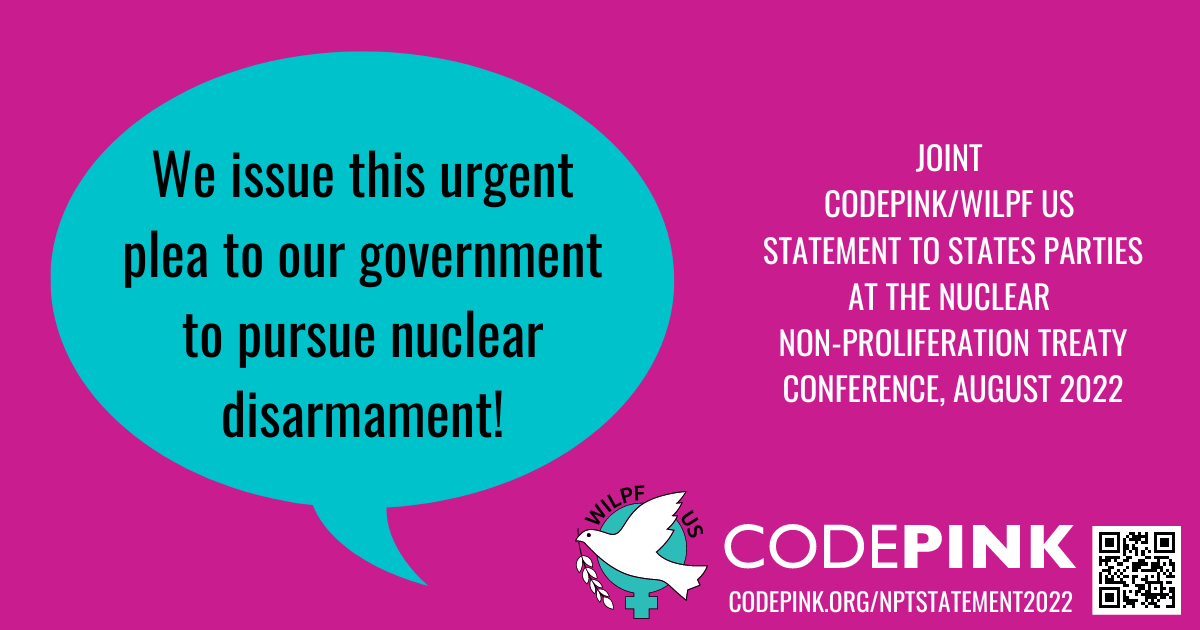 As the UN conference on the Nuclear Non-Proliferation Treaty (NPT) gets underway this August, CODEPINK and WILPF US call on the U.S. government, one of 191 signatories to the Treaty, to remove its nuclear weapons from NATO countries and its anti-ballistic missiles from Romania and Poland, to dismantle its land-based intercontinental ballistic missiles (ICBM’s), to take all nuclear armed missiles off hair trigger alert and reverse course on nuclear rearmament.

CODEPINK and WILPF US object to US violations of the Nuclear Non-Proliferation Treaty as our government pursues nuclear rearmament with 600 new ICBMS, a sea-launched nuclear cruise missile, a B-21 strategic bomber and other new nuclear weapons. Our government labels this program nuclear “modernization”--a euphemism designed to disguise violations of Article 6 of the NPT, which prohibits the pursuit of new nuclear weapons.

We object to the deployment of U.S. nuclear weapons in Belgium, The Netherlands, Germany,  Italy and Turkey, as well as reinstallation of nuclear weapons after a 14 years hiatus in the United Kingdom. We object to the placement of anti-ballistic missiles on Russia's border in Romania and nearby Poland because these weapons escalate the arms race, sending a message that the US and its NATO allies could launch a first strike on Russia protected from retaliation.

Meanwhile, all nuclear-armed states are spending tens of millions of dollars each year to replace and upgrade their deadly arsenals. Russia is threatening to deploy new strategic systems, including a nuclear-armed torpedo. President Putin recently suggested he might put nuclear weapons-capable missiles and aircraft in Belarus. Contravening Articles 1 and 2 of the NPT, the United States put nuclear weapons-capable missiles in several NATO nations and Poland is now asking for them. China and the United Kingdom, among other nuclear-armed states, are also increasing the quantity and capabilities of their nuclear arsenals.

At this tenuous time, the US government is engaged in a protracted proxy war with Russia, sending long range rockets to Ukraine, intent on training Ukrainian pilots, our Secretary of State never once meeting with Russia's foreign minister, our President never publicly supporting diplomacy to resolve the crisis in Ukraine.

We at CODEPINK and WILPF US raise our voices in thunderous protest at this warmongering and say steps must be taken to de-escalate the crisis.

Much as we condemn Russia’s horrific invasion and brutal occupation of Ukraine, we acknowledge our part in this– with US and NATO provocations–and we protest our government's decision to escalate the war with billions of dollars in weapons and military training rather than efforts to reach a negotiated settlement to build a new security architecture for Europe that will guarantee security to all in the region.

CODEPINK and WILPF US urge the nations of the world to join us in saying “Come to your senses!” to President Biden, Secretary of State Antony Blinken, National Security Advisor Jake Sullivan, Secretary of Defense Lloyd Austin, Chair of the Joint Chiefs of Staff Mark Milley, and every member of Congress who recently voted for the 2023 $840 billion military budget, which includes $30 billion for a nuclear rearmament program expected to total nearly $2 trillion dollars over the next decades.

Instead of pursuing world peace and climate preservation for our children and their children, leaders of the US are chasing a reckless and provocative foreign policy that pits the two most heavily armed nuclear nations, the US and Russia, against each other, in an existential threat to humankind.

There are some who believe we can survive such a nuclear war. In fact, the City of New York, home of the United Nations, recently released a so-called Public Service Announcement on how to survive a nuclear attack – referring to it as “the big one” as though it were an earthquake. No mention was made of blinding flashes of light or widespread radiation that blisters the skin or immediate incineration. Instead, New Yorkers were instructed to get inside, stay inside and stay tuned. Tuned to what? Our fading heartbeats?

A nuclear war between the US and Russia would, according to ICAN (International Campaign to Abolish Nuclear Weapons), lead to human annihilation–over 34-million dead, 57 million injured in the first few hours–and several dark subzero winters of famine as soot blocks the sun for those who survived.

No mention is made of this nightmare scenario, however, in the 2019 Joint Chiefs Nuclear Operations Publication (3-72), a Strangelovian document briefly released then deleted from the website of the Joint Chiefs of Staff. The vanishing unclassified document, preserved by the Federation of American Scientists, reflects the Pentagon’s delusional thinking that a nuclear war can, in fact, be limited and won. Mark Milley, then Secretary of the Army, now Chair of the Joint Chiefs, signed off on the chilling statement below:

“A nuclear weapon could be brought into the campaign as a result of perceived failure in a conventional campaign, potential loss of control or regime, or to escalate the conflict to sue for peace on more-favorable terms.”

We at CODEPINK and WILPF US ask the signatories to the UN Nuclear Non-Proliferation Treaty, civil society delegates and all peace-loving people to join us in demanding President Biden declassify his Nuclear Posture Review because the people of the United States, of the world, deserve to know what’s in it –whether President Biden abides by the Joint Statement he signed with Putin in 2021 and the Joint Agreement he signed with five nuclear weapons states, including Russia and China, in January, 2022, to commit the US to the Nuclear Non-Proliferation Treaty because “a nuclear war can never be won and must never be fought.”

We issue this urgent plea to our government in the United States to not only declassify the new Nuclear Posture Review, but to forsake escalation for negotiation in Ukraine, to stop sending weapons to Ukraine to fan the flames of war and risk nuclear catastrophe, to reverse course on nuclear rearmament, to remove all land based intercontinental ballistic missiles on high alert, and to once and for all embrace the Nuclear Non-Proliferation Treaty “to pursue negotiations in good faith on effective measures relating to cessation of the nuclear arms race at an early date and to nuclear disarmament.”

(Take Action: Email the White House to demand President Biden’s Nuclear Posture Review be made public. Call your US Senators (202) 224-3121 to urge them to vote NO on the 2023 military budget or National Defense Authorization Act)