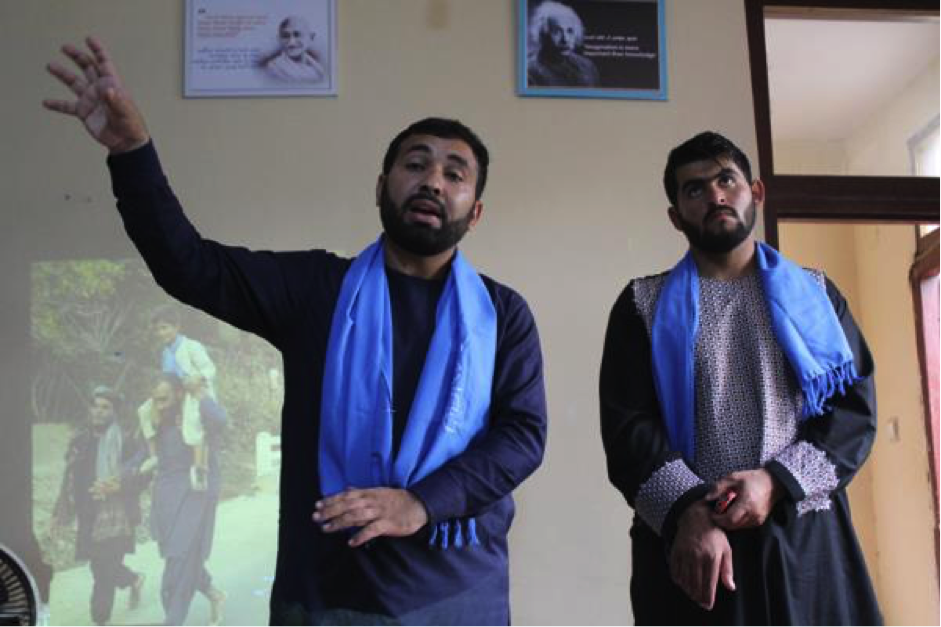 Grade 12thAfghan student Jamila Omary asked, “Do you have any plans to arm yourselves, because of the threats and dangers you have faced?”

Iqbal Khyber answered, “No. Though it is easy to buy weapons today, arming ourselves will worsen the war. Weapons will make us less secure.”

What a breath of fresh air in the stench of war-as-usual!

Iqbal and his fellow People’s Peace Movement ( PPM ) representative, Badshah Khan, had an unusual and delightfully different conversation with the young Afghan participants of the ‘Youth on the Road to Peace Conference’ on the 26thof September 2018, organized by the Afghan Peace Volunteers ( APVs ) in Kabul.

“Many governments and corporations have a thriving weapons business. I feel that this is dangerous because as they seek greater profits, they are threatening not just Afghanistan, but the whole world. We human beings may soon destroy ourselves,” Iqbal Khyber had said to me afterwards.

We acquiesce to continued international arms sales because we are comfortable in our pet beliefs and fixed ideas about defeating ‘terrorists’ through superior warfare. Just as we preserve our fossil-fuel habits despite our awareness of climate science, we ignore U.S. congressionally-mandated evidence that the ‘war against terrorism’ has in fact increased terrorist attacks five-fold.

The majority of us are not the ones being killed, so we casually get used to wars festering in other places. But the smoke of war is catching up on all of us, making us sick at two minutes to midnight, as the Bulletin of Atomic Scientists have warned. Eventually, the business of war can stifle and kill all of us, just as Iqbal fears.

It is remarkable that amidst war’s unforgiving flames, Iqbal and Badshah wish to douse the inaccurate and unimaginative beliefs about the Afghan war.

They want fellow Afghans and the people of the world to consider nonviolence as a pragmatic solution, and they are ‘walking their talk’ beautifully.

So that we can consciously open our shut ears, Iqbal, Badshah and five other ordinary Afghan folk initiated the PPM as the Helmand Peace Convoy, walking more than 700 km from their unrestful home province of Helmand to Kabul. They were so passionately thirsty about delivering their message of peace that they walked in the fasting month of Ramadan, under the blazing summer sun.

They met the Conference participants after they had returned to Kabul from their barefoot convoy to several Northern Afghan provinces. 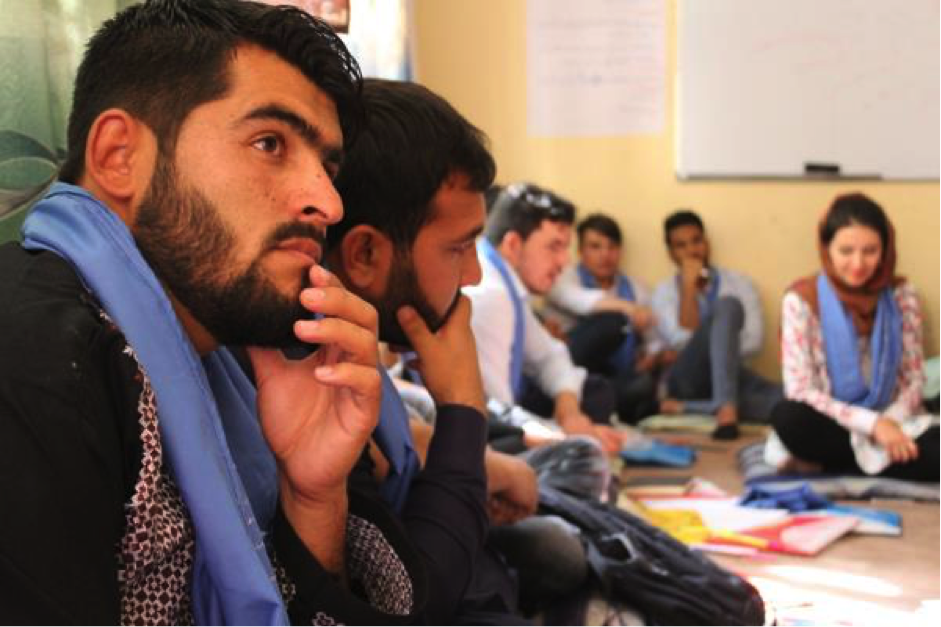 I got dizzy thinking about these Afghan youth standing before the militants and the strongest militaries of the world that are ‘congregated’ in Afghanistan, and saying, “We don’t want your weapons and your armies. We want peace.”

Iqbal continued his story, “Near the province of Samangan, we were told that the Taliban had laid an ambush, intending to hurt us. I discussed this with Badshah Khan and another core member of the PPM. We didn’t tell the other members as we didn’t want them to be unnecessarily afraid. The three of us decided to press on. In fact, we decided to go right to the ‘headquarters’ of the Taliban in that area.”

Iqbal and his friends set up camp in Taliban territory, and though their ‘microphones were taken away”, no one harmed them physically.

The faces of the youth in the discussion room were drawn with both tension and excitement. They were hopeful, but they also had doubts.

Mohammad Jamil, a university student, was even suspicious of fellow Afghans living in Helmand Province, “Do the people of Helmand really want peace? What is the war in Helmand about?”

Iqbal replied, “The people are all tired of war. They want it to end. This is an economic war. In Helmand, minerals are extracted, and opium is traded.”

Ending the war in Afghanistan without armies and weapons may seem overwhelming. Unsure about the PPM achieving favorable outcomes, Mah Gul asked, “What are your future plans and actions?”

“We wish to go to mosques, and have conversations with the people at the mosques,” Iqbal stated.

Members of the PPM are showing that instead of using bullets and bombs, every individual and society can choose other ways to build peace. They suggest that peace has been elusive so far because we have largely presumed that war was necessary, and only chosen military strategies.

We have all been smoking the cigarette of war, despite the evidence on its cancer-causing nature. What we should do is to quit smoking. Quit the human behavior of war! 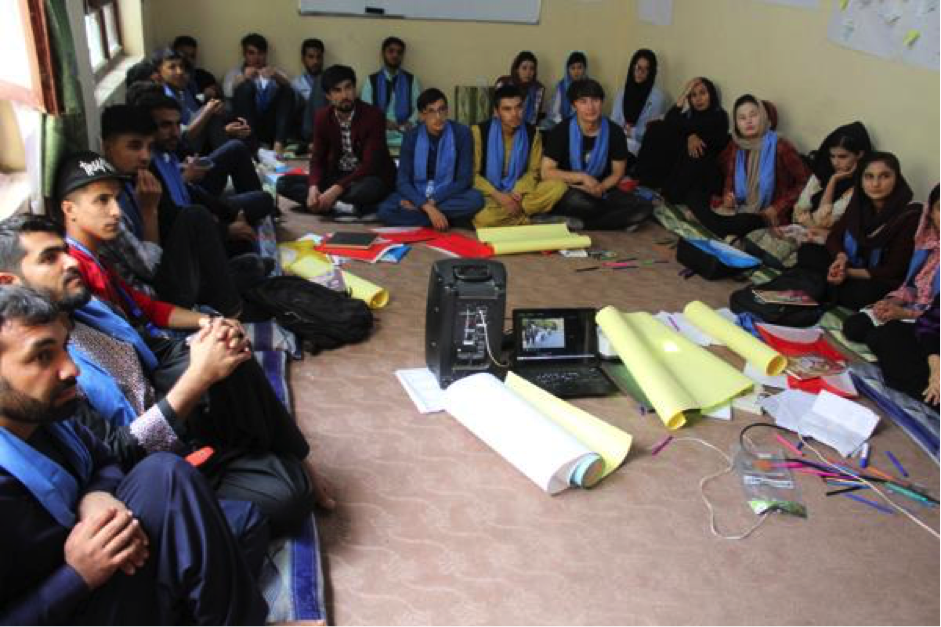 What can each of us do to support the People’s Peace Movement and Afghan Peace Volunteers ( APVs ), instead of continuing an ineffective and unkind Trumpian non-strategy of ‘killing people’?

We can work through our doubts by having honest conversations with them by writing to the  People’s Peace Movement ( PPM ) or [email protected]d.com

We can sign“The People’s Agreement to Abolish War”or World Beyond War’s Peace Declaration.

Just as more and more of us are steering away from fossil fuels, we can look for and divest from war-making jobs, businesses and policies.

War is not inevitable. It is an obsolete, repetitive choice. Everywhere, each of us can emulate these new-generation Afghans by ushering in breaths of fresh air!

Dr Hakim, ( Dr. Teck Young, Wee ) is a medical doctor from Singapore who has done humanitarian and social enterprise work in Afghanistan for more than 10 years, including being a mentor to the Afghan Peace Volunteers, an inter-ethnic group of young Afghans dedicated to building non-violent alternatives to war. He is the 2012 recipient of the International Pfeffer Peace Prize and the 2017 recipient of the Singapore Medical Association Merit Award for contributions in social service to communities.