No Aloha for Assassin Drones That Have Arrived in Hawai’i 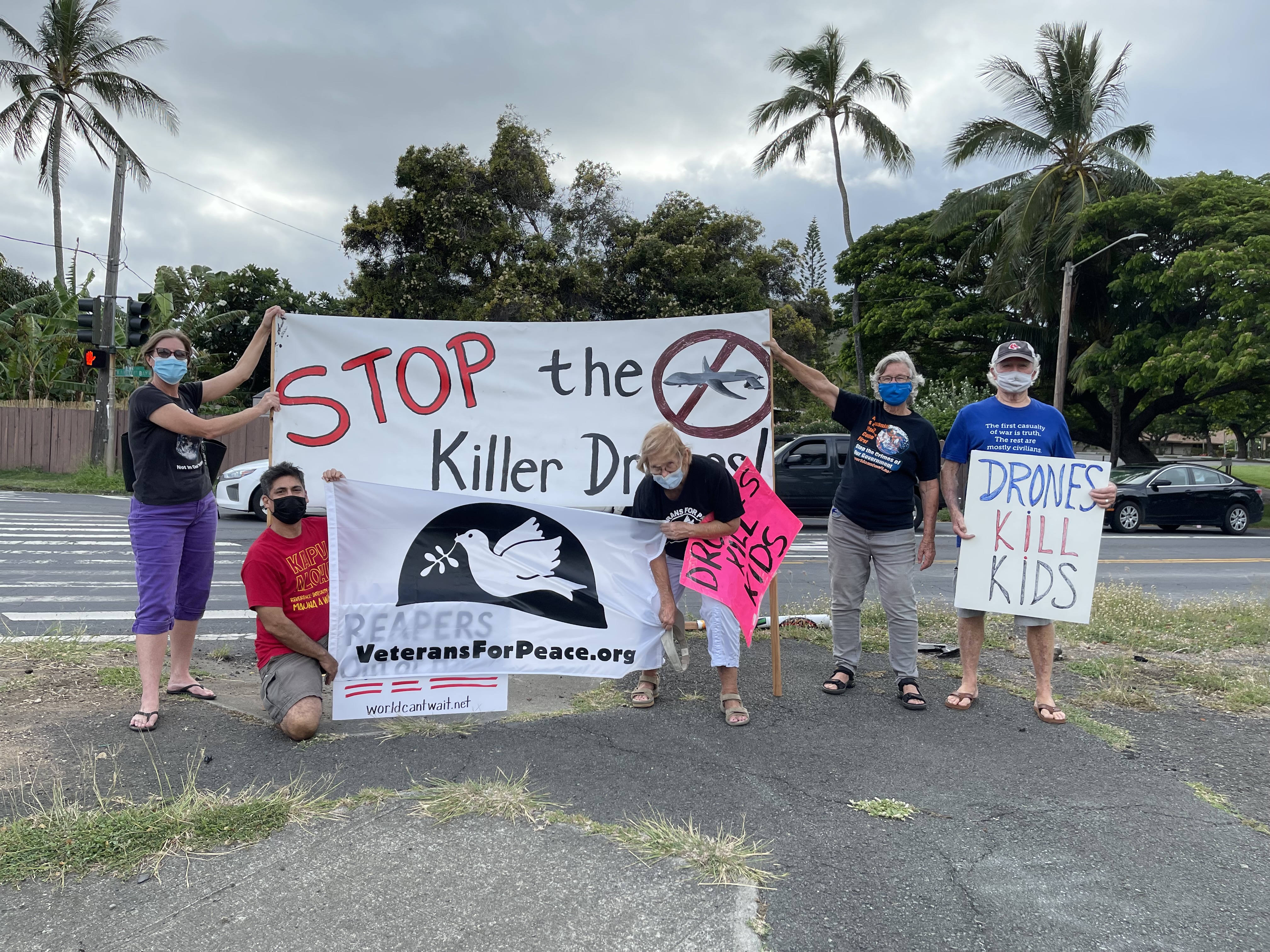 Photo by Sharon Uyeno of September 23 drone protest at Kaneohe Marine Base, Hawai'i

The world was horrified by Hellfire missile fired from a U.S. military drone that caused the August 29, 2021 deaths of ten innocent civilians, including seven children, in a family compound in downtown Kabul, Afghanistan.  The photos of the blood-stained walls and the mangled white Toyota in the family compound in densely populated Kabul have gotten incredible attention compared to the 15 years of drone strikes in isolated areas in which hundreds of people attending funerals and wedding parties were killed.

For three weeks after the drone attack, the senior leadership of the U.S. military justified the killings by saying that the drone strike saved lives from an ISIS suicide bomber.  Chairman of the Joint Chiefs Milley had characterized the drone strike as “righteous.”  Finally, after extensive investigation by New York Times reporters,  on September 17, 2021, General Kenneth McKenzie, the Commander of the U.S. Central Command acknowledged that the drone murdered ten innocent civilians.  “It was a mistake…and I am fully responsible for this strike and tragic outcome.”

On September 19, details emerge that the CIA warned the U.S. military that there were civilians in the family compound where the car had parked.

Now Hawai’i, 2560 miles from any large land mass,  is added to the list where young military personnel will train to become drone operators.   Two of the six Reaper assassin drones designated for Hawai’i arrived last week at the US Marine Base in Kaneohe, O’ahu. Much closer to possible target areas is Guam that also scheduled to have six Reaper drones.  As a part of the new Marine strategy in the Pacific, the Marines will join the Air Force and CIA in operating killer drones.

Our communities in Hawaii will be affected by drone operations.  Marines will practice flying the drones at the Kaneohe Marine base runway and will flying them in commercial airspace to the runway at the Barking Sands Pacific Missile Range on Kauai to practice landings and taking off.  To practice firing the Hellfire missiles similar to the one(s) that killed the family in Kabul, the Marines will fly the killer drones in the commercial air space to Big Island to blow up targets on the Pohakuloa Training Area (PTA) and perhaps land them at the small runway at PTA that was built over a decade ago for drones.

The Kaneohe community should prepare itself for the predictable mental stress that comes from operating the killer drones.  Young Marines, both women and men, will suffer the same emotional turmoil that we have seen reported at other U.S. military bases that house drones. A study of drone operations reported that 8.2% of drone pilots had recorded mental health incidents including diagnosed mental disorders and mental health problems, such as “partner relationship problems” or “family circumstance problems.”  The two most common diagnoses were adjustment disorder and depressive disorder.

Although it is sometimes claimed that physically-distant drone operators are as morally disengaged and as immune to risk as the players of violent video-games, evidence to the contrary is emerging.

The killer drone unit at Kaneohe should know that we as citizens in Hawai’i will be protesting their presence as we have protested drone operations in Nevada, California, New York, Missouri, Iowa, Wisconsin and in Germany.

We will be demanding  accountability from the drone operator up the chain of command for the killing innocent civilians.  For decades the U.S. has been murdering innocent civilians, including U.S. citizens, in Afghanistan, Pakistan, Iraq, Yemen, Somalia, Libya and Mali.   Not one person in the military has been held accountable for these criminal acts. Instead, drone whistleblower Daniel Hale is sitting in prison with a 45 month sentence.

About the Author:  Ann Wright served 29 years in the U.S. Army/Army Reserves and retired as a Colonel.  She was also a U.S. diplomat for 16 years.  She resigned from the U.S. government in 2003 in opposition to the U.S. war on Iraq.  She is the co-author of “Dissent: Voices of Conscience.”