My Visit to the School of the America Watch

My Visit to the School of the America Watch
By Rosie Platzer, CODEPINK Intern, Cal Poly State University

The other weekend I had the wonderful opportunity to go to the School of the America Watch (SOAW) in Columbus, GA with Nancy Mancias. It was an absolutely amazing weekend, and if possible, I definitely plan to go again next year!

The weekend started in Lumpkin, GA for a rally and march to the Stewart Detention Center. Stewart Detention Center is actually the largest, for profit immigrant holding center in the country. Here we gathered and listened to speeches and music about discrimination faced by the Latino community in regards to immigration law. We heard from a man who actually used to work at the detention center. He described the abuse and corruption committed by the detention center and by ICE. 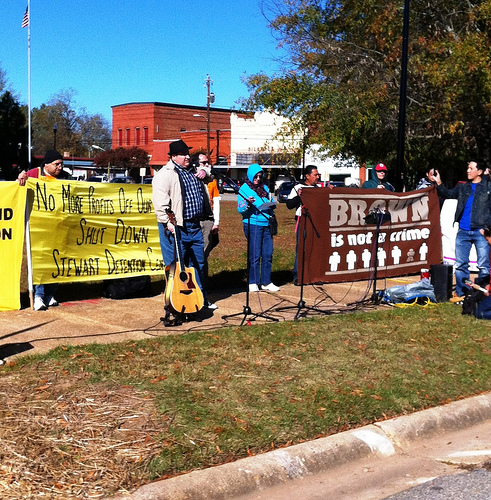 The rest of the weekend was in Columbus at the Columbus Conference Center. There were a variety of workshops held covering a wide range of topics. The first workshop we went to was about war criminal accountability where we were shown videos on torture committed by the US. After that we went to a very informative workshop on improving research skills. The highlight of Friday night was at 9:30, when members of the Creech 14, including Brian Terrell, put on a short play based off of their trial.

Saturday was filled with more interesting workshops as well. In the morning there was a rally going on outside the gates of Fort Benning. There was great music playing, people giving speeches, a performance with puppetistas, and so much more. 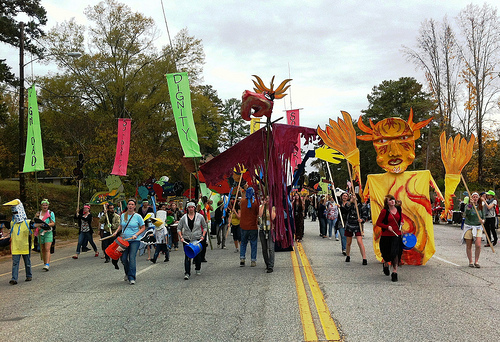 And Saturday was our big day! At 9:30 that night, Nancy and I, along with Brian Terrell and Father Louis gave a workshop called “Stop drone strikes: resisting remote control sanitized death.” We had a pretty good turn out with a significant amount of women. Martin Sheen was even in the audience for part of our workshop!

Besides our workshop, the Sunday rally outside of Fort Benning was the most exciting part of my weekend. There was a moving vigil held for innocent people who have passed away from violence. Those on stage would sing the names of the deceased, while participants would carry white crosses and place them in front of Fort Benning’s gate. 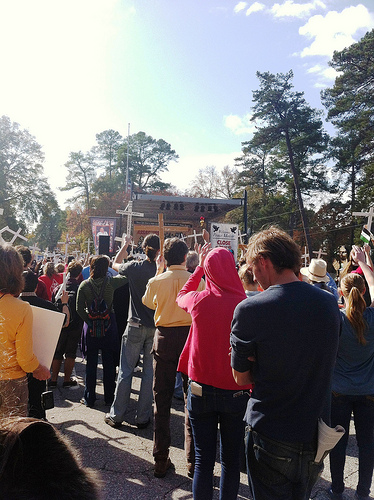 After the vigil was over, a large group of people sat quietly outside the gate. It was an emotional site, with many people crying. And then, seemingly out of nowhere, a woman walked up to the gates! She was going to cross over in an act of civil disobedience. Someone brought her a ladder and a little piece of carpet to protect her from the barbed wire at top. As she climbed up, everyone was cheering for her in solidarity. She reached the top, tossed her heels over the fence, and hopped over. Once on the other side, she was arrested. Watching this woman was inspiring for me. And it got the crowd really excited. All of us began singing, chanting, and dancing in unison. I really felt connected to a group of people that I had never met before. It was really amazing to see and experience. 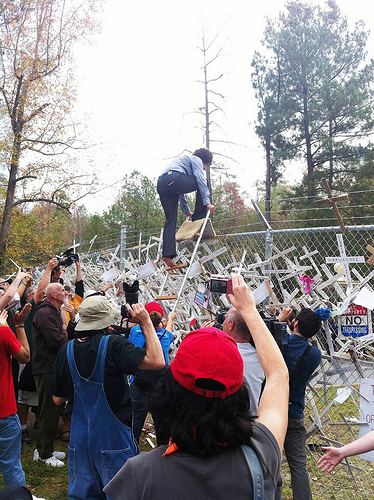 This was the end of our trip and we headed back to Atlanta to catch our flight back to San Francisco. It was really a great weekend. I met and talked to so many interesting people. Nancy and I even tried soul food for the first time, so delicious! This was definitely a weekend I will never forget!