Mother's Day Reclaimed Across the Country! 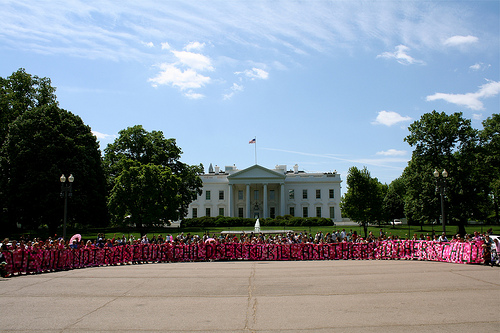 This past weekend Mother's Day was powerfully and boldly reclaimed by CODEPINK local groups around the US as a day for women to gather to end war.  In over twenty cities around the country CODEPINK groups held events and actions in honor of this special day, and in DC we held a heartfelt and moving 24-hour vigil.  Thanks to the hard work of so many dedicated women for peace, the White House Cozy came together so we could spread our message that "We Will Not Raise Our Children to Kill Another Mother's Child!"  We sang, danced, and shared stories and ideas with mother's from all over the world.  CODEPINK activists came to DC to join the vigil from all parts of the country.  The photos and the video tell the story most vividly.

New York City, NY: On a beautiful sunny Mother's Day, CODEPINK NYC and The Granny Peace Brigade lead a group of about 100 on a lively stroll through the Upper West Side and into Central Park. With Carmelina and Walter setting the beat with their drums, we were greeted with enthusiasm at the street fair on Broadway and the craft fair on Columbus, and handed out 1,600 fliers/Mother's Day cards. WE WILL NOT RAISE OUR CHILDREN TO KILL ANOTHER MOTHER'S CHILD.

Pittsburgh, PA: CODEPINKers in Pitts honored the sons and daughters lost in the wars in Iraq, Afghanistan, and also the children killed in the brutal war in Gaza in January. This year we were honored to have as our guest speaker Regina Birchem, an activist who traveled to Gaza with CODEPINK. We read Julia Ward Howe's Mother's Day Proclamation call for peace. The grannies lead us into song. Each year we celebrate CODEPINK Pittsburgh's Birthday, which is on Mother's Day, with pink cake. People brought their children and grandchildren to take a moment to honor lives lost and the hope for a better world for all of our children.  There are beautiful photos of CODEPINK Pitts in action with their hot pink banner.

Portland, OR: CODEPINK sent cards to First Lady Michelle Obama this Mother's Day with a copy of Julia Ward Howe's Mother's Day Proclamation for Peace inside, hoping she will pressure her husband to end the wars.  They also held a silent vigil to commemorate the true meaning of Mother's Day, and to remind all who see us of mothers who are grieving because of the ongoing illegal occupation of Iraq and the war in Afghanistan.  The Oregon News covered the event and there is a great Youtube documenting the action.

San Francisco, CA: About 60 codepinkers and friends came together from around the Bay Area and as far away as Lake Tahoe, for our monthly Walk for Peace on the Golden Gate Bridge. "Free Gaza", "War Is Not the Answer" and of course, the Mother's Day pledge were some of the peace messages shared with motorists, tourists, bikers, bridge district cops and other walkers.  Grace of Marin County educated folks on Julia Ward Howe's creation of this holiday for women coming together to make peace in the world, and our big peace symbol made from dowels, pcv pipe and lots of decorations was eye-catching.  CODEPINK sweethearts Jes and Leslie made it to Baker Beach afterward to enjoy the sun on a bright, windy day!  And in Berkeley, CODEPINK staged the Hot Pink Follies production.

Sacramento, CA: CODEPINK tabled at the annual Whole Earth Festival, and read the Mother's Day Proclamation on stage at the concert!  See fabulous photos of Sacto women with the Mother's Day sign.  And watch a video on Sacto CODEPINK's facebook.

New Rochelle, NY: Gaza trip delegate Felice Gelman reported back on her trip at an event connecting the origins of Mother's Day - centered on peacemaking by mothers of all backgrounds.

Asheville, NC: CODEPINKers showed the documentary “Beyond Belief” at Firestorm Café & Books. There was tabling, speeches by mothers whose sons/daughters are being deployed to Afghanistan, and a banner display.

Vigils around the country: Groups in Orange, CA, Santa Monica, CA (with a freeze action!), Cedar Falls, IA (with a peace concert!), Delray Beach, FL (handing out pink roses, the proclamation, and a flyer with "What can YOU do to stop the war" info), Buffalo, NY (with a walk for peace), State College, PA, and Nashville, TN

And of course, from small towns and cities around the world women knitted pink and green squares for the cozy.  We received thousands and thousands of squares at the Pink House, a brilliant array of the creativity and determination of women to end war and support our visible presence outside the White House.

And hundreds of women took part in our mama mosaic by submitting photos of themselves holding up our Mother's Day sign.  See the photos on flickr here.  See the full mosaic here.