Oh men we ♥! Let us count the ways! It's been a long week (so long that this is the Saturday edition of Men we ♥ Friday)--we lost 2 amazing women trailblazers (Granny D & Juanita Goggins), the resolution and debate to withdraw from Afghanistan resulting in 65 members of Congress voting yay (see the breakdown here) was a bit grueling and well, about 100 other things that keep the days flying by! HOWEVER, Men we ♥ Fridays always gets us excited for the end of the week so we can celebrate more awesome activists! Here's to the fellas!~ 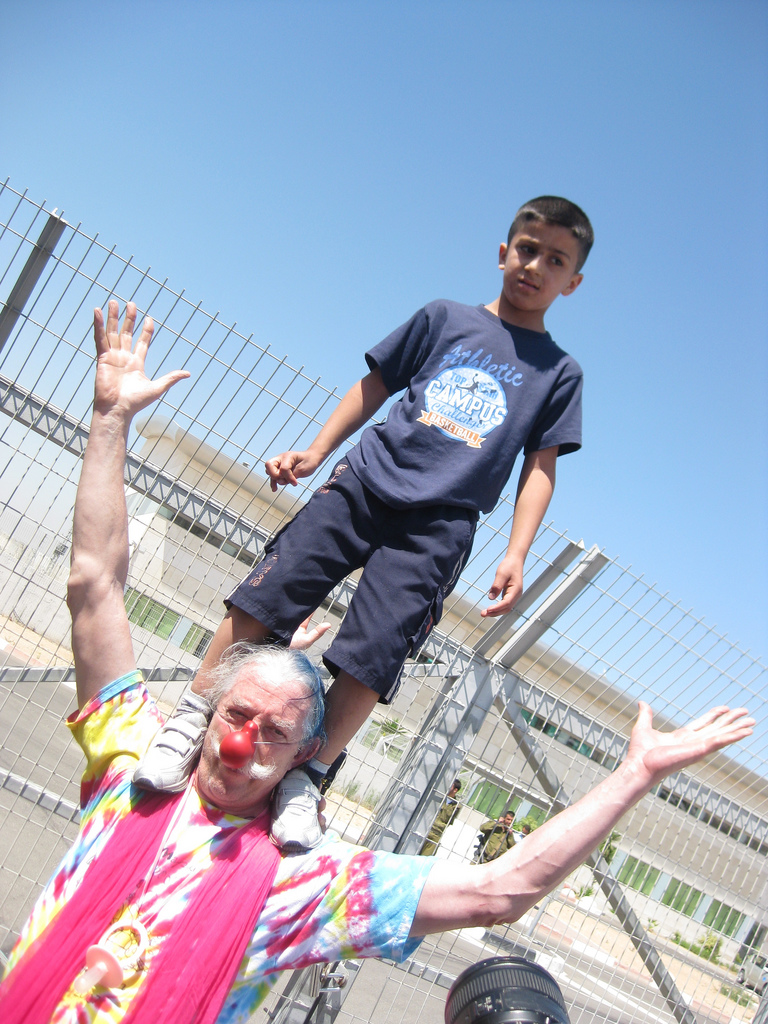 Dr. Patch Adams and a friend trying to get into Gaza with CODEPINK at the Erez border in Israel, Summer 2009

Dr. Patch Adams has a special place in our hearts - this towering man cannot help but inspire laughter in everyone he meets, from kids holding trauma from bullets, bombs, or fatal diseases, to riot police and businessmen.  It's this laughter therapy which becomes Patch's prescription for peace, and Congress would be wise to take note of Patch's long-standing proposal for Gesundheit! Institute, a free, full-scale hospital and healthcare eco-community.  This week Patch is in Guatemala co-creating a clowning camp for kids, and next week he flies to Haiti to bring his contagious playfulness and unwavering belief in love to earthquake survivors.  On the phone from Guatemala, Patch sent hugs and kisses to all his CODEPINK sisters and hopes to join us in DC on Mother's Day weekend, May 8-9, to bring a zany, creative alternative to the annual Military Arms Fair on the Mall.  Join us and you may see Patch in the world's largest pair of underpants... or get a ride on Patch's shoulders too!

♥ This week amidst (shocking/awful/dreadful/...) news headlines, one article warmed our broken hearts: two friends Faisal Mohyud-Din and Mohammed Azeem broke the world record for the longest hug and raised money for a local cancer hospital. Read all about it and let your heart fill with the love that the hospital administrator called "a hug for all cancer patients". We just love men who, um, love.

And even though we called the vote on the withdrawal from Afghanistan in Congress this week "gruesome" we do have to give props to Dennis Kucinich for continuing to bring the debate into the spincycle that is the beltway and into the public debate. It was disheartening to hear how many representatives spoke of "getting them before they get us" and how little they mentioned civilian casualties (not including the civilians casualties on 9/11 of course)--but Dennis Kucinich's speeches (and a host of other members like Lee, Baldwin, Woolsey and more) throughout the day were thoughtful, powerful, something we need more of. And let's not forget Pat Kennedy's rant on the media. While it came a bit out of left field we appreciate the sentiment, the calling out of the failings of MSM and egging on media to actually cover the debate (which they barely did).