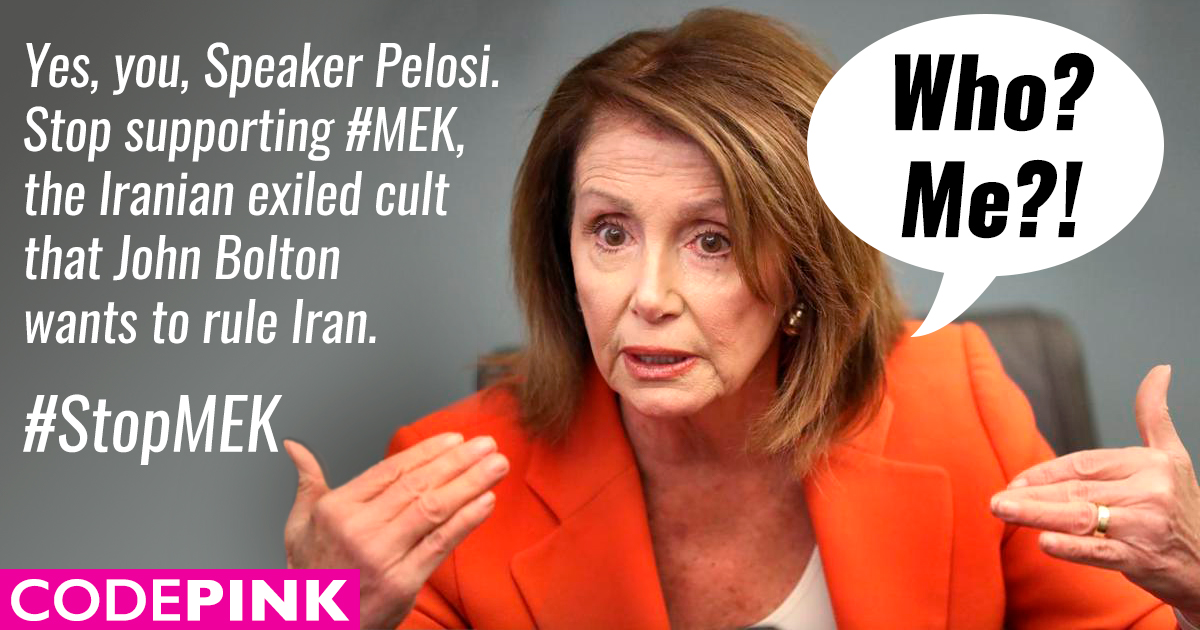 House Speaker Nancy Pelosi supports the Mujahadeen-e-Khalq (MEK), an Iranian dissident group in exile that has little to no support from the people of Iran. Pelosi has been repeatedly seen speaking at MEK events and sending messages of solidarity. The MEK is also the group John Bolton wants to rule Iran and he’s been paid $180,000 to speak at MEK events that call for regime change, sanctions, and war with Iran. Why does Nancy Pelosi support a terrorist group that is the darling of John Bolton and Donald Trump?

Email, call, and tweet at Speaker Pelosi urging her not to support the MEK and instead support diplomacy with Iran by encouraging the US to reenter the Iran nuclear deal and lift sanctions on the Iranian people. Supporting a group like MEK that is loved by Bolton will only lead us to another disastrous war.

I am calling (if you are a constituent, say so and give your city) to ask Speaker Pelosi to stop supporting the MEK, the exiled Iranian terrorist organization. The MEK is backed by Trump advisors like Bolton who calls for regime change, increased sanctions, and military intervention in Iran. Many Iranians criticize the Islamic Republic, but they do not see the MEK as a legitimate replacement for the regime. I ask Speaker Pelosi to stop supporting this group and instead revive the Iran nuclear deal and lift the devastating sanctions. The Iranian people need peace, and supporting the MEK will only lead us into war. Thank you for your time.