May 23 Nationwide protests against BlackRock

On May 23rd, CODEPINK activists and allies around the country protested the annual BlackRock shareholders meeting to say: stop making a killing on killing!

BlackRock is the world's largest investment firm that has billions of dollars invested in weapons companies such as Lockheed Martin, Raytheon, Northrop Grumman, Elbit, and General Dynamics.They position themselves as a company that is socially responsible, yet they continue to invest heavily in weapons companies. So, CODEPINK activists and allies around the country offered shareholders an alternative: invest in peace not weapons! 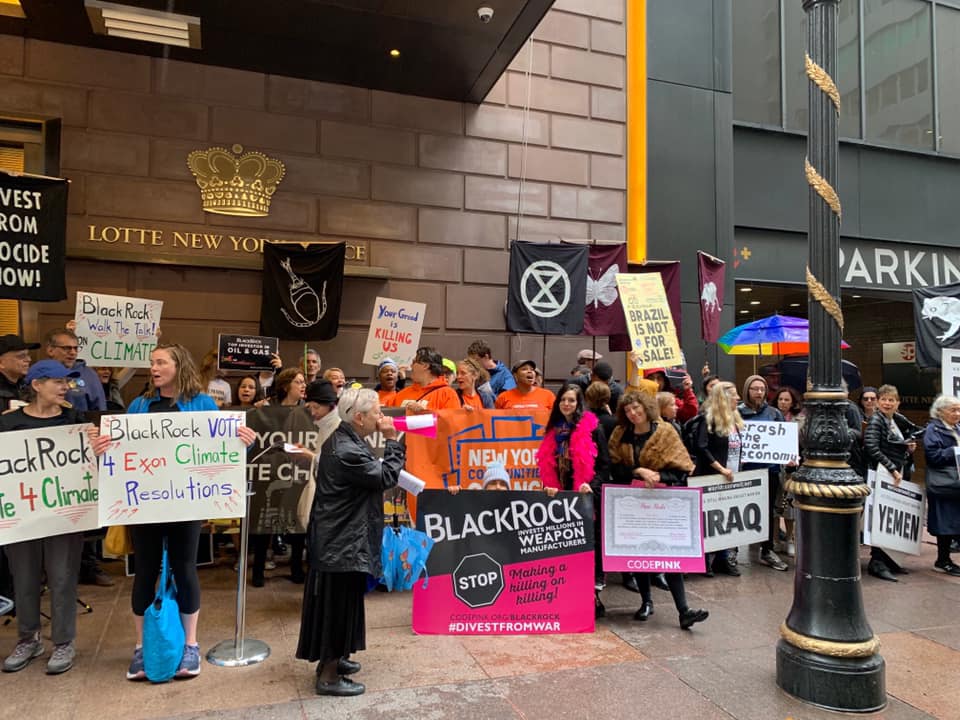 In New York City, a powerful coalition of more than 20 anti-war, climate, and health organizations rallied at the BlackRock shareholder meeting to demand BlackRock immediately end their destructive investments that make a killing on killing. They dressed as billionaires, holding shares of “Peace Rock” instead of “BlackRock.” CODEPINK led the crowd in chanting “Divest Now From the War Machine” and handed out educational pamphlets to hundreds of morning commuters. They were joined by activist leaders from diverse organizations such as Act Up!, Black Rock’s Big Problem, DSA, New Sanctuary Coalition, NY Communities for Change, and World Can’t Wait calling BlackRock to divest from weapons, private prisons, immigration detention, fossil fuels, and pharmaceuticals. We shone a light on how the world’s largest shadow bank is funding death at home and around the world. 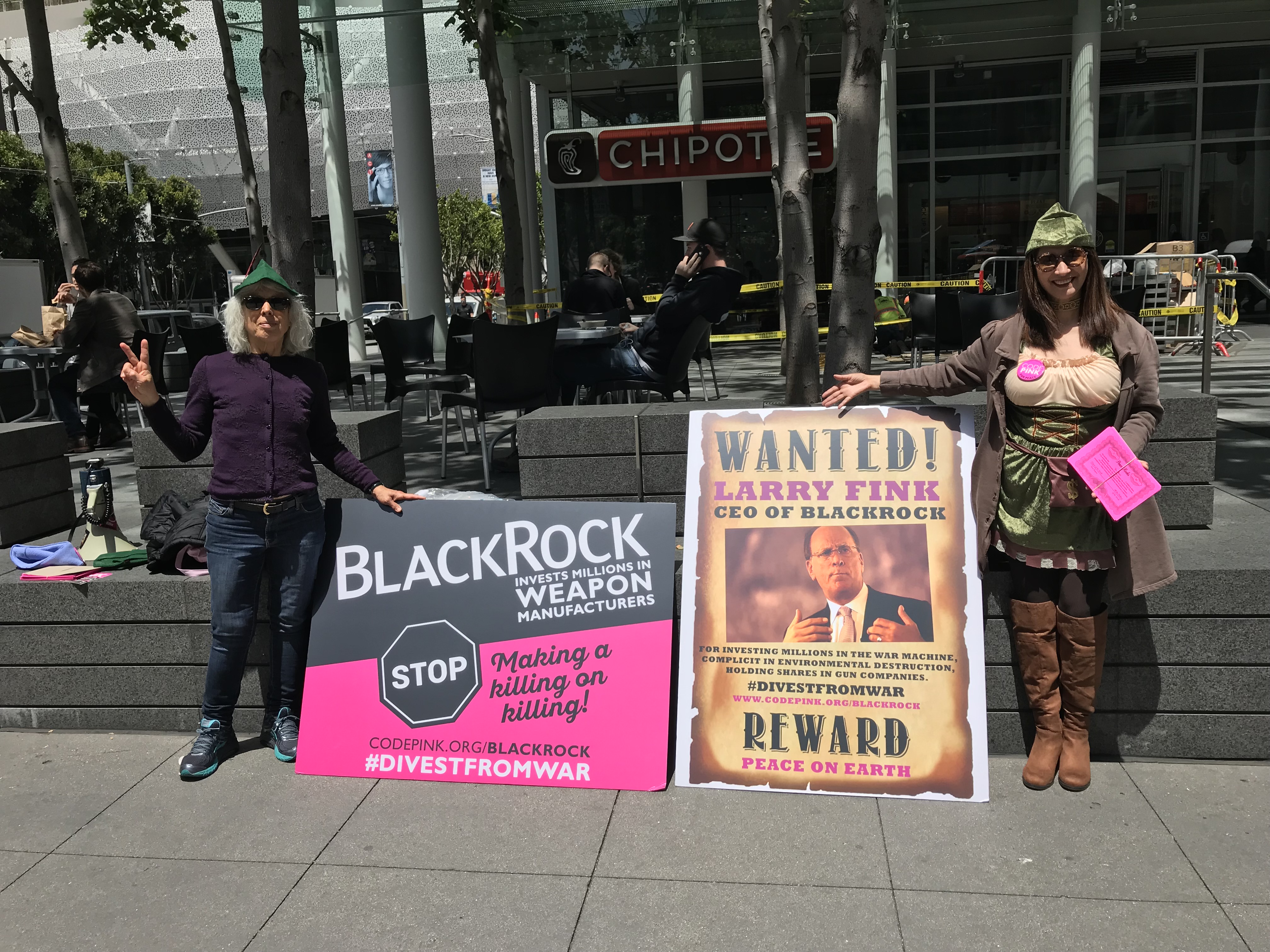 In San Francisco, a small and mighty group of activists, dressed as Robin Hood, held a presence outside the BlackRock office. They handed out peace dividends and flyers asking people to dump BlackRock. Eventually, the activists made their way over to the entrance of the building to talk to the staff; however, office executives prevented the activists from entering and called the local police. The activists vow to return to BlackRock's office in San Francisco.

In Santa Monica, CODEPINK members visited local BlackRock offices to ask them to stop investing in weapons of war. Jodie and Ryan talked to a staff member who was upset to learn that her company makes a killing on killing. 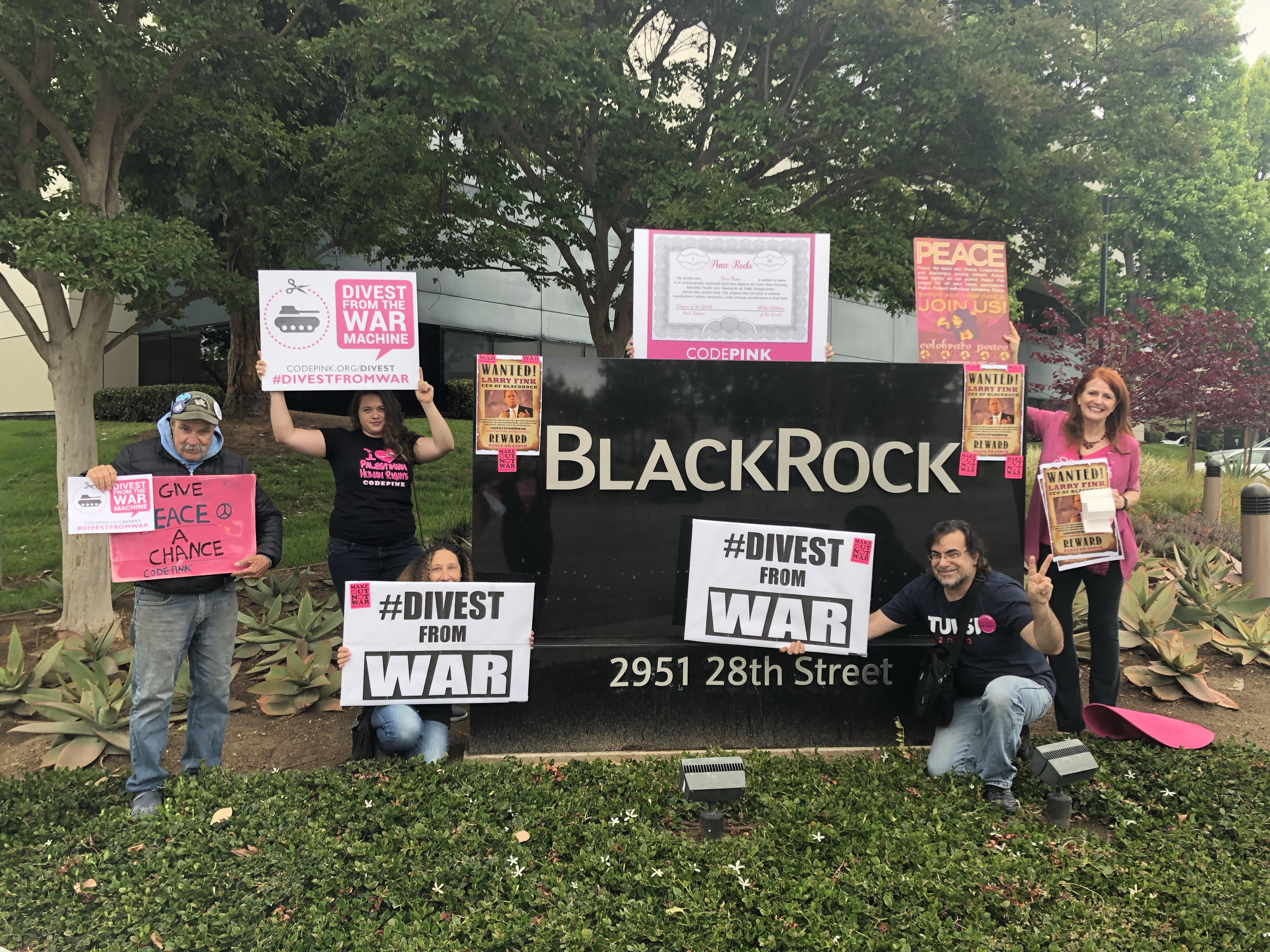 A group of activists also protested outside the BlackRock offices and talked to workers at neighboring businesses who were surprised to find out that BlackRock invests billions of dollars in weapons manufacturers like Raytheon, a company responsible for bombing a school bus full of Yemeni children. It was heartening to have conversations with people who were shocked to hear how lucrative war can be and reminded everyone that spreading peace comes from engaging people in one on one conversations.

As the Trump administration threatens to launch a devastating war with Iran, the organization known as Massachusetts Peace Action led a rally in coalition with CODEPINK outside the BlackRock offices in Boston calling on the firm to divest from war profiteer Raytheon and other weapon manufacturers. About a dozen activists were in attendance and featured local community speakers who highlighted that our struggle to divest money from weapons manufacturers is intersectional: not only do weapons disproportionately kill people in the global south, they also devastate our environment. This protest was a great way to connect our struggles in the peace movement with progressive allies working for justice around the country! 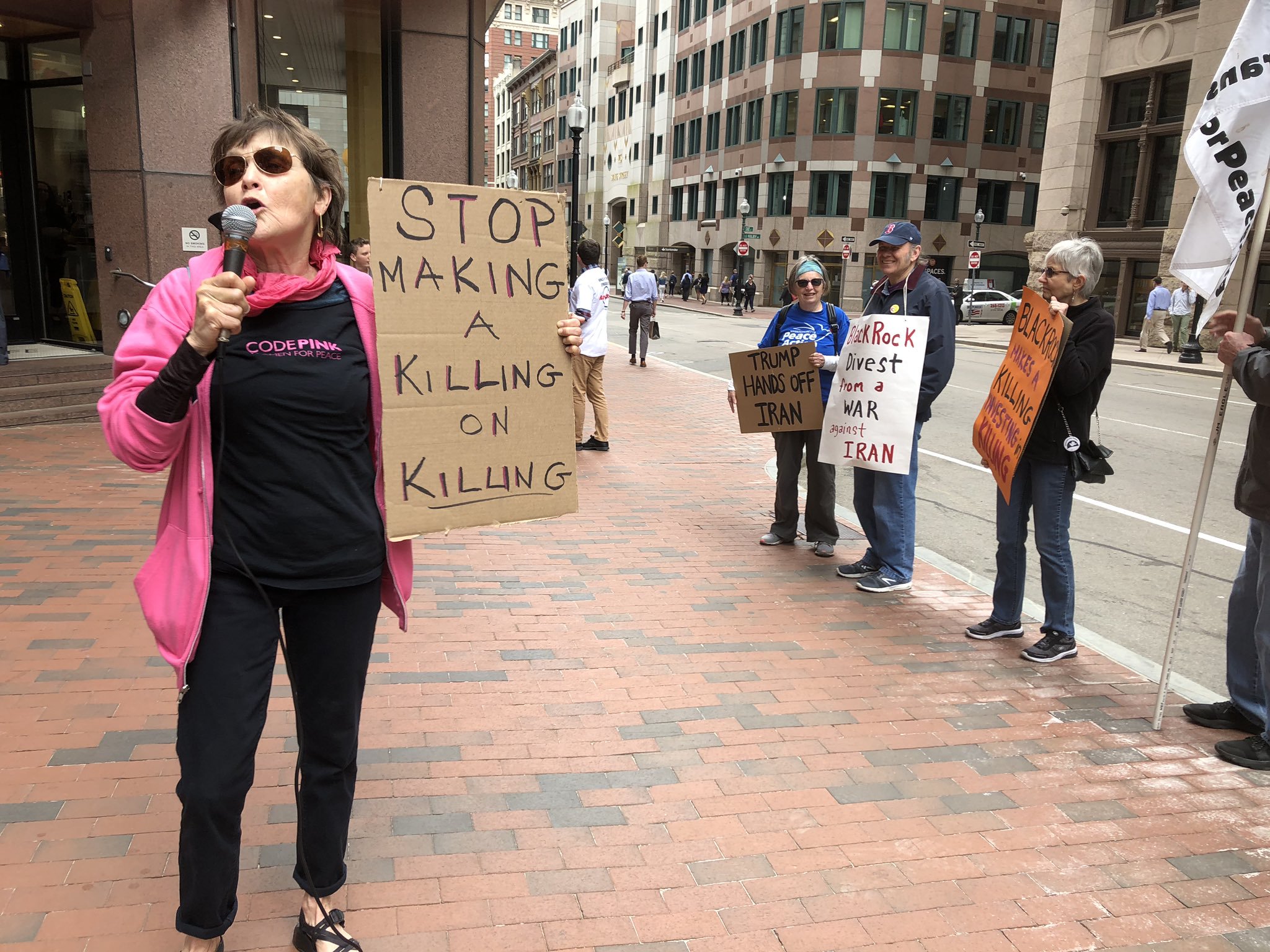