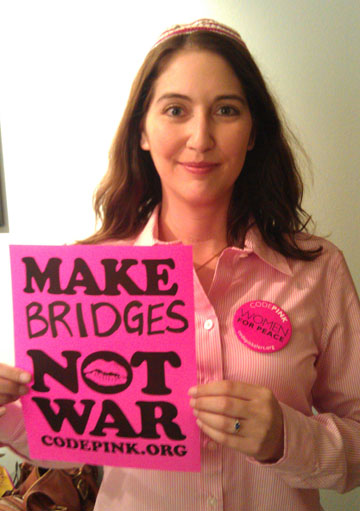 Today, Los Angeles Mayor Villaraigosa held a town hall meeting in West LA. I attended the meeting to ask him how he's going to use the lobbying weight of the U.S. Conference of Mayors (USCM) and the Los Angeles DC office to end the wars in Iraq and Afghanistan and bring the money home. Think that's an odd mouthful to ask a local leader? CODEPINKers know everything local is connected to the federal government's funding choices. And it helps that Villaraigosa is the president of the USCM, which passed a historic resolution calling on Congress to Redirect Military Spending for Domestic Priorities. A few weeks after that, the Los Angeles City Council passed an anti-war resolution. Villaraigosa supported the passage of both resolutions, so now we're looking forward to working with him to see the resolutions implemented.

Alas, I wasn't called on to ask my question publicly. I was able to learn that my neighbors don't want more digital billboards, think the promised new rail line needs to have more stops, and want more money for arts education. All worthy issues. The best part was how the mayor chose to close the night. He noted that "this country has to find its soul again. The poverty rate is growing and there really isn't an investment in people like there should be." And he reminded the gathering that he believes we need to end the wars in Iraq and Afghanistan and bring the money home. He repeated his line "that we should build bridges in Baghdad and Kandahar and not Baltimore and Kansas city absolutely boggles the mind."

So now the work really begins: we must help our neighbors remember that as a community we can do great things, but the myth of individual resilience is a lie. We must save the social safety net from draconian cuts. We must remind people that tax cuts to the rich and unfunded wars caused the national debt and it can't be paid off on the backs of working people. We must gather our mayors to elevate our voices for change. We must work together to completely end the wars in Iraq and Afghanistan and bring all of the troops and contractors home. Are you ready to Create, Not Hate?