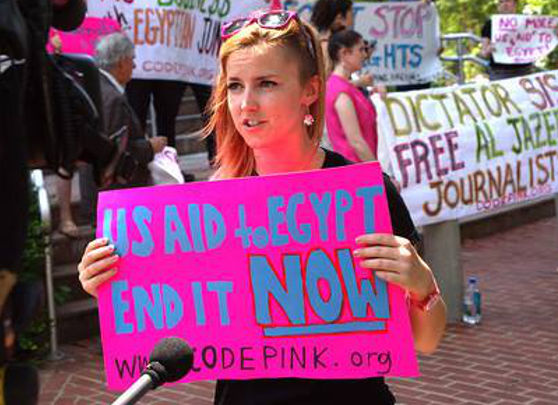 At CODEPINK we're disgusted to learn that Senator Lindsey Graham, a member of the Senate Armed Services Committee, has just returned from a trip to Egypt where he met with Egyptian President Abdel Fattah el-Sisi. Even worse, he described Sisi as “the right person at the right time for Egypt,” despite Sisi's horrifying record of human rights abuses and the violent, undemocratic coup that launched him into power.

Tell Senator Lindsey Graham (and other supporters in Congress) that Sisi is most definitely the wrong person at any time when it comes to leading Egypt!

Support for President Sisi is unconscionable. Under his rule, Egypt remains in a human rights crisis where protests are essentially outlawed, tens of thousands of political dissidents have been imprisoned, a counterterrorism law has extended the government’s powers to target opponents, and prisoners are tortured and disappeared. In the past few weeks, the European Parliament and the U.N. Council for Human Rights have both called out Egypt’s human rights crisis, and it's time for the American government to do the same.

In 2013, Senator Graham himself denounced Sisi’s military coup against elected President Mohammed Morsi and called for the U.S. to suspend aid to Egypt. Sisi came to power by mowing down peaceful Morsi supporters in what Human Rights Watch (HRW) called “one of the world’s largest killings of demonstrators in a single day in recent history."

Despite these abuses, the United State’s $1.3 billion in annual military aid to Egypt continues unabated. Join us in calling on Lindsey Graham and other Congressional leaders to publicly condemn the human rights abuses of President Sisi and end U.S. military support to his regime.

PS: Show your love for Egypt and support CODEPINK with this Arabic Love t-shirt, featuring the word “love” in both English and Arabic!