Guest-blogger Patricia Foulkrod, an acclaimed director and producer based in Los Angeles, describes her experience last night attempting a citzens' arrest of former Bush chief of staff Karl Rove at Loyola Marymount University. Her most recent documentary, "The Ground Truth: After the Killing Ends," follows Iraq soldiers from recruitment to basic training, from battlefield orders to postwar support for wounds, both physical and emotional.

Friends of mine in CODEPINK LA emailed me that Karl Rove would be speaking at Los Angeles’ Loyola Marymount University as part of the school's annual First Amendment Week.  I then learned Rove would reportedly receive $30,000 by LMU for this 6 p.m  Happy Hour.  How many community college students could study the U.S. Constitution and the workings of Rove with his fee?  A question perhaps for future SAT tests.

I got another CODEPINK email, casually asking if I would be willing to attend, and at some point, handcuff him.  I knew they were not joking;  CODEPINK in San Francisco had tried last fall to handcuff Rove when he spoke at a conference there, surprising him and the press for a much more interesting day. Still,  I looked at their video clip and decided I'd fake the flu -- I am a claustrophobic filmmaker. I like filming that does not involve jail, and going home after to feed my dog Bella before she eats the rest of the couch.  Jodie Evans, CODEPINK co-founder, tried to seduce me with one word  -- elegant – she could count on me to dress up and handcuff Rove with style and elegance.  We both knew she was asking Forest Grump to step in for Pittsburg Steeler’s Santonia Holmes.   So I emailed back I was not a Republican-handcuffing kind of girl.

Then one of the Iraq veterans featured in my documentary, "The Ground Truth," gave me a call. His Post-Traumatic Stress Disorder is recklessly ROVING across his brain, he said, his heart, his marriage. He can’t work, hardly leaves the house, and has an appointment with Veteran's Affairs sometime in the vague future.  He voted for Obama but the hope and change jingle did not get past his intrusive thoughts.

I hung up and remembered beneath my irrational fear of very tight spaces is an even greater fear of Karl Rove being in the same room with the First Amendment.  I put on my long black velvet coat, my red high heels, and picked up a ten dollar pair of silver handcuffs CODEPINK left for me – just in case.

The first thing I heard outside Loyola's lecture hall were wonderful very loud protesting voices – the Obama victory has not seduced these students into forgiveness.  " Bush's Brain ...Down the Drain."  Dozens of them were chanting and marching alongside a handful of adults, perhaps faculty members playing hookey.  I convinced a very nice LMU public relations person I was with a progressive online news show. Oh well.  She had seats left in the section next to a local reporter who agreed to take a photo of whatever I did. 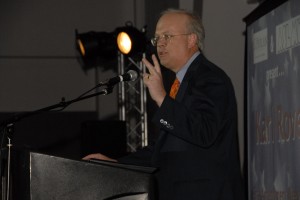 As part of Loyola’s First Amendment Week tradition, Rove was given five questions. First question: did he think the First Amendment was too far reaching and too broad?  “No,” he replied, and went on for ten minutes to explain to us surfer heads why it had been so important for the White House to give no access, no leaks and no transparency for eight long years on anything except George W. Bush's swallowing the pretzel.  Rove explained how "grave" were possible breaches of trust by explaining how many Congress members came into Rove’s office complaining about Bush and his policies, and then walked into Bush’s office and sucked up to him.  He said we would not want some wayward comment or criticism by a member of Congress to end up on the front page of The New York Times.  “It would prevent people from telling the truth.”  I was surrounded by nodding Republicans quietly discussing their hope that Michael Lewis could do for them what Emanuel did for Obama -- “he cast Republican looking Democrats to run for office.”   A fun-house feeling tingled underneath my velvet. The students in the back were not buying it.

The crowd asked question after question about Rove’s subpoenas from Congress.  Two political science students quoted his testimony before Congress, chapter and verse.  I wanted to write their parents a thank you note.

I finally got my turn and stood up several feet away from the podium. “You have talked about the fact that the people behind the scenes, the invisible ones, are actually more powerful and more dangerous in the liberal press – you specifically said producers and editors.  Are you not describing yourself.  You have been the man behind the curtain for eight years and everything Bush did is tied to you.  But I am here to bring you a present..." (I raised my arms, and all the security people around him moved a few steps towards me.) 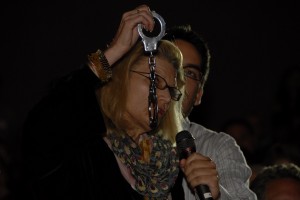 "I have interviewed over a 100 soldiers from the Iraq and Afghanistan Wars – including many Republicans - and out of that 100 only maybe two have said that they felt the Iraq War has been a just and noble cause and a war worth fighting for...many are sick and wounded and they would like you to have these..." (I held up my handcuffs high), "AND THEY WOULD LIKE TO SEE YOU LOCKED UP IN THEM!"

The capacity filled room of 700 people exploded with mostly loud cheers and applause. Rove stopped and stared at me and came back with, “That has not been my experience," but because of the cheering, he had to wait before speaking.

He said he knew he was suppose to take another question but instead wanted to tell two stories, realizing the questions could get worse.  He spoke of a family who has lost a son another one in Iraq, and the father who is a doctor has now also enlisted in honor of his son. (I know this PR story as it has been reported more than once).  Rove went on to tell the story of a very disfigured soldier who keeps a plaque on his door – which Rove insisted reads, "Do not feel sorry for me, I did what I did for the people I love and my country."

By the end of the night, Rove was $30,000 richer, and both wars live on, with the Afghanistan occupation about to grow more deadly.