On January 23, Kathy Kelly, co-coordinator of Voices for Creative Nonviolence, a campaign to end U.S. military and economic warfare, will begin a three-month jail sentence in federal prison for a protest against drones (also known as “unmanned aerial vehicles”) at Whiteman Air Force Base in Missouri. I had a chance to interview her before she had to turn herself in. 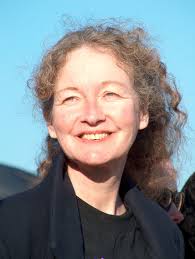 Medea: Can you just say why you have been particularly moved to take action against drone strikes?

Kathy: I think 21st-century militarism is very frightening when you combine the military’s Joint Special Operations Forces with drone and air strike capabilities. The military doesn’t need sprawling bases anymore because they can use these new technologies to control populations and instill tremendous fear. But the use of drones creates resentment and antagonism, and continues to kill civilians.

Wars have been killing civilians for a long time, but with the help of drones, 90 percent of the people killed in wars these days are civilians. The British organization Reprieve reports that for every one person who is selected as a target for assassination by drones, 28 civilians are killed.

The weaponized drones are operated here in the United States in Air National Guard bases and Air Force bases, and with the press of a button they are killing people thousands of miles away in places like Afghanistan. Many people are enamored with being able to send an unmanned aerial vehicle to kill people in another country without a soldier in this country being harmed. But we find that the people operating these drones are experiencing trauma and stress just like soldiers in war zones.

I’m also very worried about drone proliferation, with other countries acquiring these weapons systems. In 1945, only one country possessed a nuclear weapon, and look at the world now. I think the same thing is going to happen with drone proliferation.

I also think that with the activist focus on drones, we can have tangible successes. We have a good possibility of persuading the public that this is a wrongful way to move ahead. It violates international law and makes other people near the bases here in the United States vulnerable as targets themselves.

We’ve already seen considerable progress on this issue. The bases that were getting the drones systems, like the Air National Guard Base in Battle Creek, Michigan, used to be so proud they were popping champagne. Now the commanders at the Battle Creek base, where the Guard is being trained to operate weaponized drones, are reluctant to talk about the drone program.

Medea: Can you tell us about Whiteman Air Force Base and what you did that resulted in this three-month sentence?

Kathy: A squadron at Whiteman, which is in Knob Noster, Missouri, operates weaponized drones over Afghanistan, which has been an epicenter of drone warfare. Whiteman Air Force Base won’t disclose information about the results of these drone strikes, but we, as American citizens, should have the right to know what is being done in our name.

We wanted to bring their grievances to the commander at Whiteman. So I crossed a line onto the base. A symbolic action for people in Afghanistan is breaking bread together, so I carried a loaf of bread and a letter to the commander asking how many people were killed by Whiteman Air Force Base on that day.

I took one or two steps over a line. Then I was arrested.

When I went to trial, the military prosecutor told the judge, "Your Honor, Ms. Kelly is in grave need of rehabilitation." But I think it’s our policy that’s in grave need of rehabilitation. We’ve already spent $1 trillion on warfare in Afghanistan and will be spending another $120 billion. The Pentagon wants $57 billion for this year alone. We’re squandering resources that are sorely needed at home and abroad to solve extremely serious problems our world is facing, problems like the climate crisis and global poverty.

Medea: When you crossed the line into the Whiteman Base, did you know that you would be facing such a long sentence? Crossing the line at some bases, and even CIA Headquarters, has resulted in a small fine.

Kathy: My colleague Brian Terrell had previous crossed onto Whiteman Air Force Base and received a six-month sentence. I faced the same judge so I was pretty sure that I would get six months as well. When he only gave me three months, I was actually surprised. I certainly don’t think I did anything criminal; I’m proud of what I did. But I expected the penalty would be higher, and wondered if the judge wanted to look good for a change.

Medea: So I take it that means you would do it again?

Kathy: Oh surely, yes. I think it’s important to take these issues directly to the place where the grievance is occurring, and that’s certainly these military bases.

I also think it’s important to take these issues to all three branches of government. I love it when CODEPINK goes into the halls of Congress or challenges President Obama, because it’s crucial to pressure the executive and legislative branches. But we have to target the judicial branch as well. We have to try every lever and keep on insisting that the Constitution protects our right to express our grievances.

Medea: In early January, you fasted and protested with Witness Against Torture to call for the closing of the Guantanamo prison, including a protest at the home of former vice president Dick Cheney. How do you feel knowing that the people making these policies aren’t held accountable, but you’re heading off to jail?

Kathy: I actually don’t want to see anyone in prison because I don’t believe in the prison system. I don’t want to see people locked up. I believe in rehabilitation. How do you rehabilitate people who have been so murderous and greedy in their war-profiteering and cronyism, and so willing to sacrifice huge numbers of lives?  It’s very hard to know. I’d like to continue in a Quakerly fashion to see decency and goodness and potential in people like Cheney, Rice and Bush. It may be that somehow the examples they set will serve to persuade future leaders not to be that way. So who knows what will come of what they’ve created.

Medea: It’s interesting that you’re against prisons, yet you voluntarily put yourself in a position where you know you’ll be in prison for a significant time. How many times have you been in prison for protesting war?

Kathy: This will be my fourth time in a federal prison. And I’ve been jailed in various county jails and other kinds of lockups more times than I can count.

Medea: Why do you continue to go to jail when there are so many other ways to protest?

Kathy: I think it’s important for peace activists to go inside the prisons and have a vivid sense of how hurtful and punitive this system is. I can read about the realities that prisoners face and the really horrific sentencing procedures but if I’m not sitting in the bunk next to the person pouring out their story, it doesn’t grab my heart and mind in the same way. I’ve been to prison many times before, and I know that when I walk out of a prison, I feel like shouting from the rooftops, “Do you see what’s going on inside these gates?”

Medea: What can people do to support you while you’re in prison? And what about writing to you or sending you books?

Kathy: I love novels, especially novels written by people from other countries. People can contact Voices for Creative Nonviolence in Chicago to find out where to send books and letters.

And people can help Voices for Creative Nonviolence. We’re organizing a walk related to the environment and militarism; we’re sending volunteers to Jeju Island in South Korea to join the movement against militarizing the island; we’re working with the youth in the Afghan Peace Volunteers in Kabul.

A good way to show support would be to join the Afghan Peace Volunteers in their duvet project--a project to make warm blankets for people in need. One winter in Kabul, 26 people froze to death in just one month, eight of them children. It was impossible to read those statistics and not think of something to do. So we helped start the duvet project. The Afghan Peace Volunteers invite women from the different tribal ethnicities, 60 in all, to pick up materials, like wool, coverlets, and thread. They go home and sew these very heavy blankets that can make the difference between life and death. Then the youth distribute the duvets to people in the greatest need. I so admire the young people because they act like social workers, going out to find out who are the neediest in their area. And very generous people in the US and the UK have donated the money. Each duvet costs about $17, and it’s now about a $40,000 project that distributes thousands of blankets each year. So people could help out by contributing to this project.

Authors note: Kathy Kelly is one of the treasures of the peace movement. She’s been an inspiration for many, including myself, so let’s show her love and appreciation while she’s in prison by writing to her and supporting her organization.

Medea Benjamin is the co-founder of the peace group CODEPINK and the human rights group Global Exchange. She is the author of Drone Warfare: Killing by Remote Control.