January 25th and the Global Movement for Yemen

Monday, January 25th, 2021 was the World Says No to War on Yemen Global Day of Action. CODEPINK joined almost 400 other organizations around the world to demand an end to all foreign aggression on Yemen, end the blockade, restore aid, and end arms sales to the Saudi-led coalition. It was full of optimism, heartbreak, and hope. We listened online and at in-person rallies all over the world about the devastation the Saudi-led war in Yemen has brought to thirty million people. We stood alongside thousands of people who care enough to be involved. 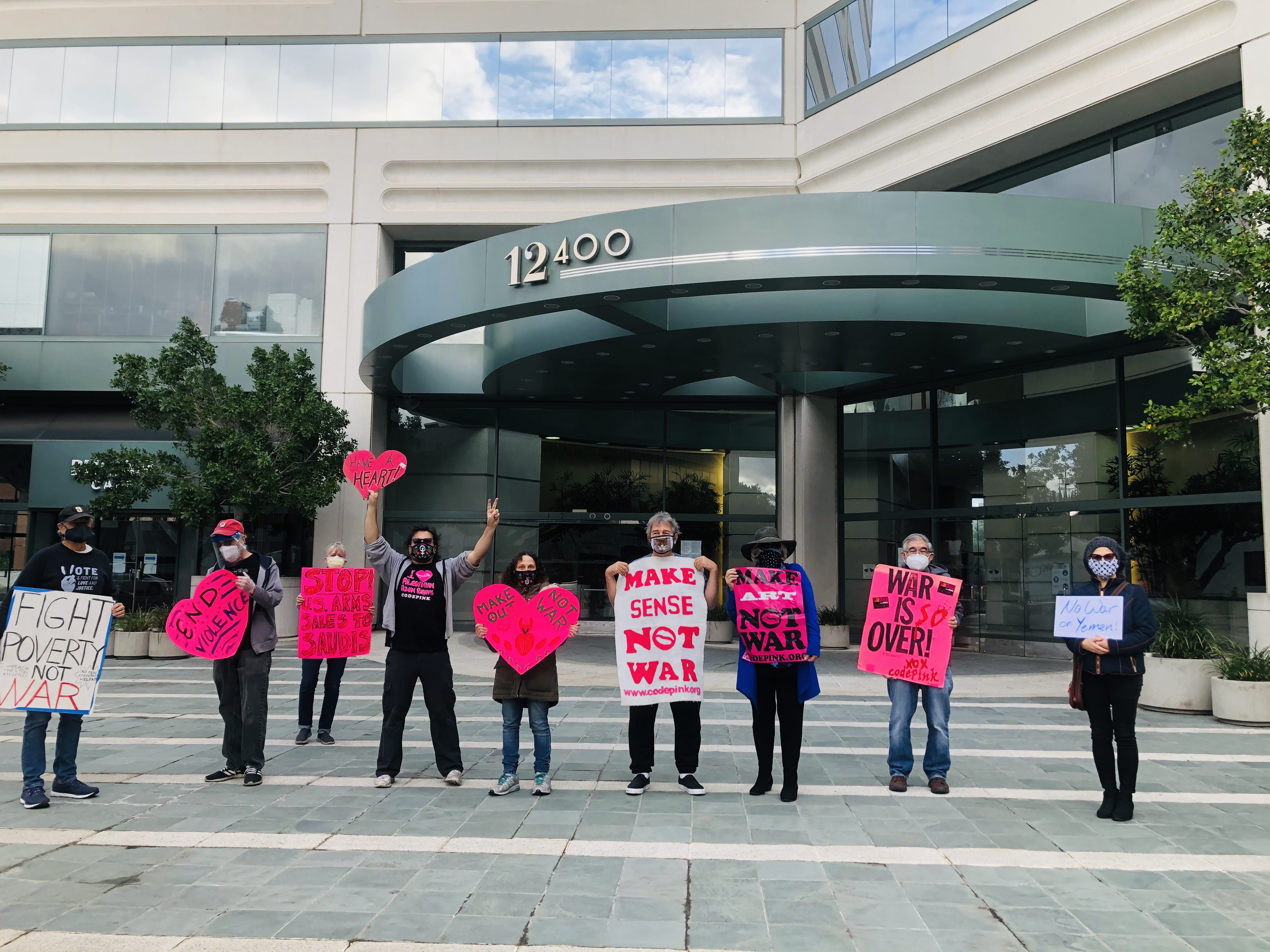 Car caravan to the Consulate of Saudi Arabia in Los Angeles

I was brought into the Yemen advocacy family back in 2018 when I attended a talk by Dr. Shireen Al-Adeimi at Loyola University in Chicago. The room was occupied by maybe 20 or 30 people who attentively listened to Shireen as she walked us through what was happening in the country she was born in. She told us about the massive cholera outbreak and about the blockade. She told us that the United States was directly involved. 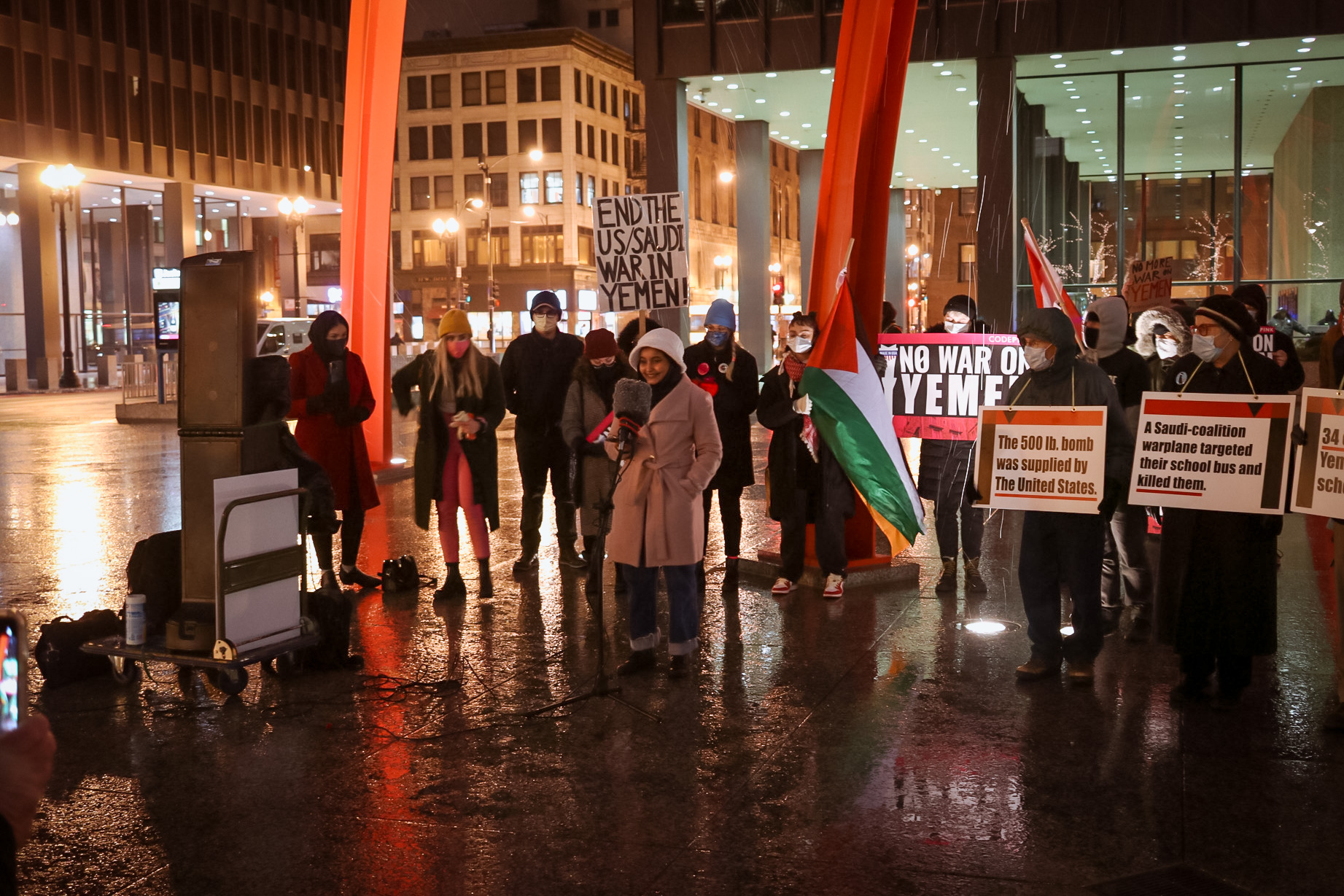 Back then, almost three years ago now, Yemen was called the “world’s worst humanitarian crisis,” and on January 25th, we still used those words to describe what is happening there. The only difference now is that things have gotten worse, and the human cost has skyrocketed. Yemenis are still dealing with cholera (now in addition to COVID-19 and other diseases), the blockade is still intact, and the United States is still directly involved. 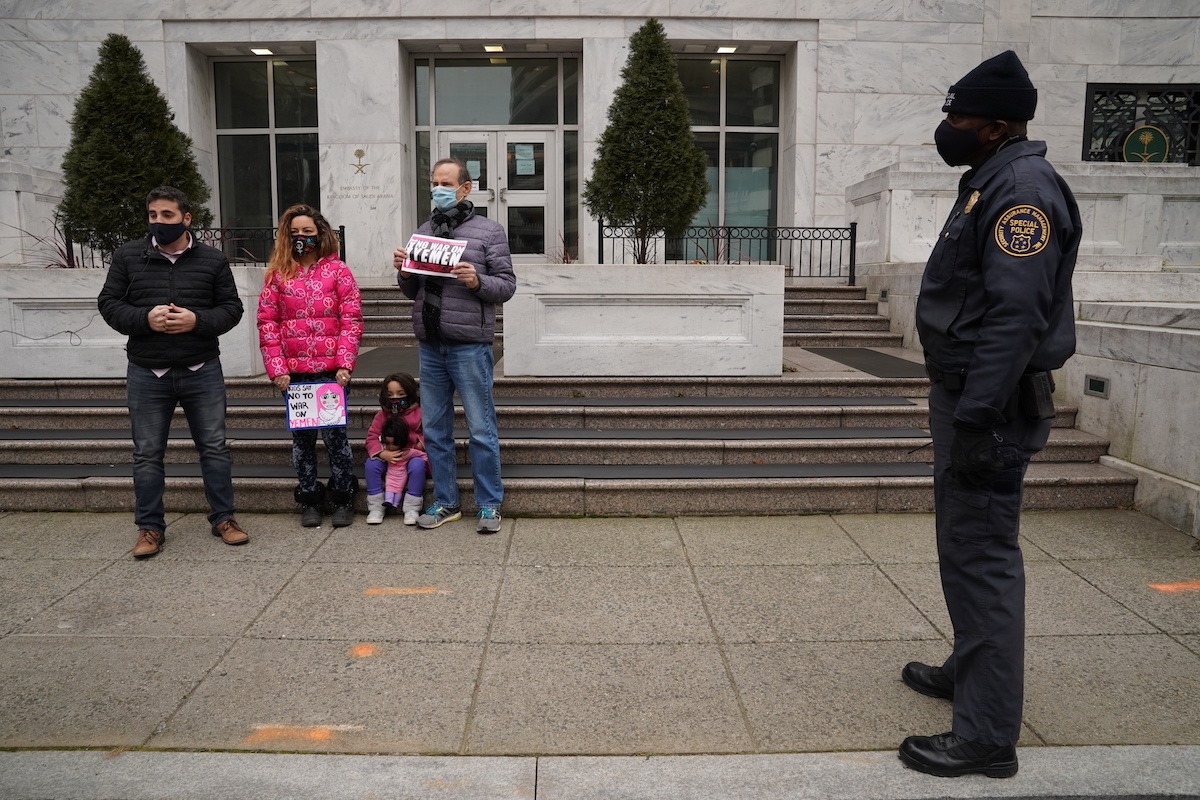 Car caravan to the Saudi Arabia Embassy in Washington DC

Around the time I met Shireen, whom I now think of as a friend, she was leading the movement for Yemen with just a handful of other people. When I watched her speak at our Global Day of Action webinar this past Monday, thousands of people were joining us from dozens of countries all over the world. 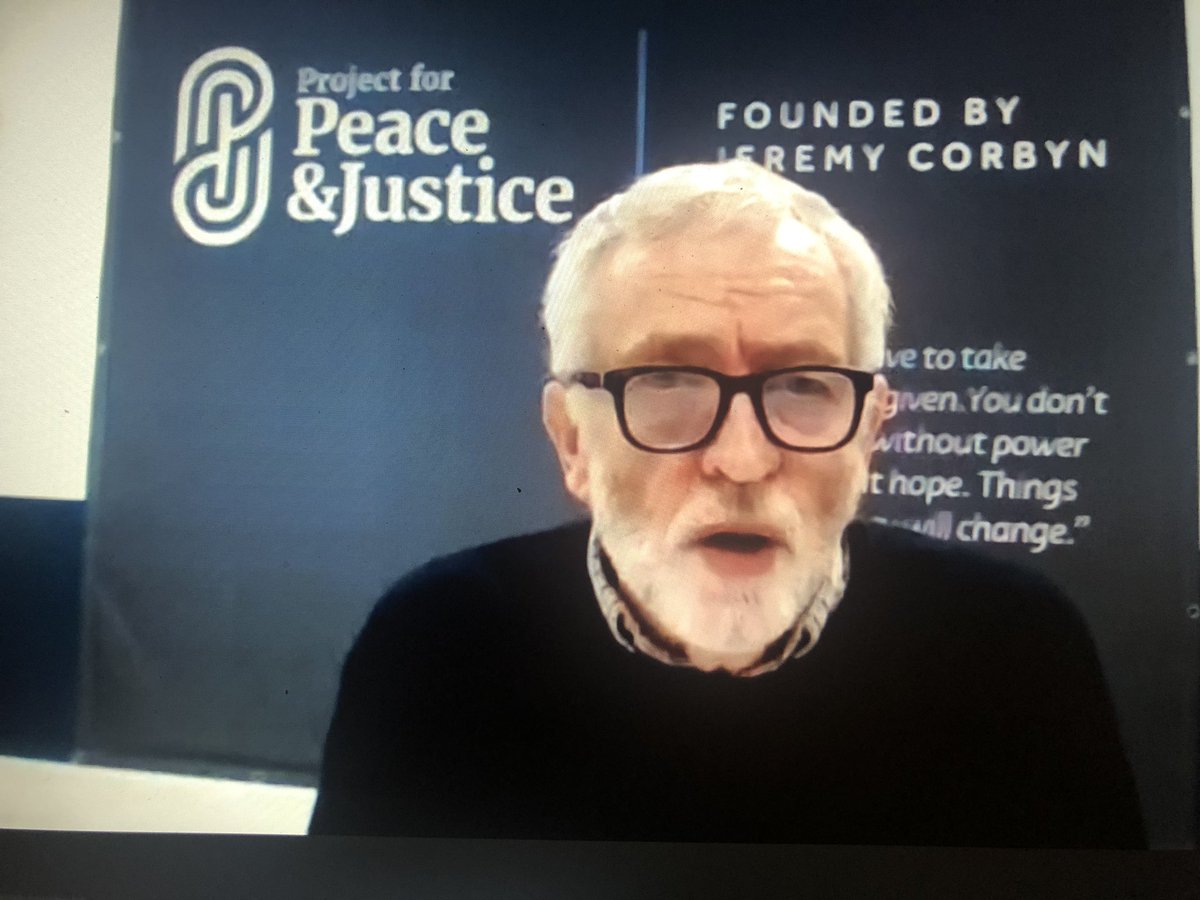 Going up against the US empire can make progress seem impossible and sometimes it can get lonely. But in just three years, the movement for Yemen has grown exponentially, and we got to see that on display on Monday. I hope we can take inspiration from that. 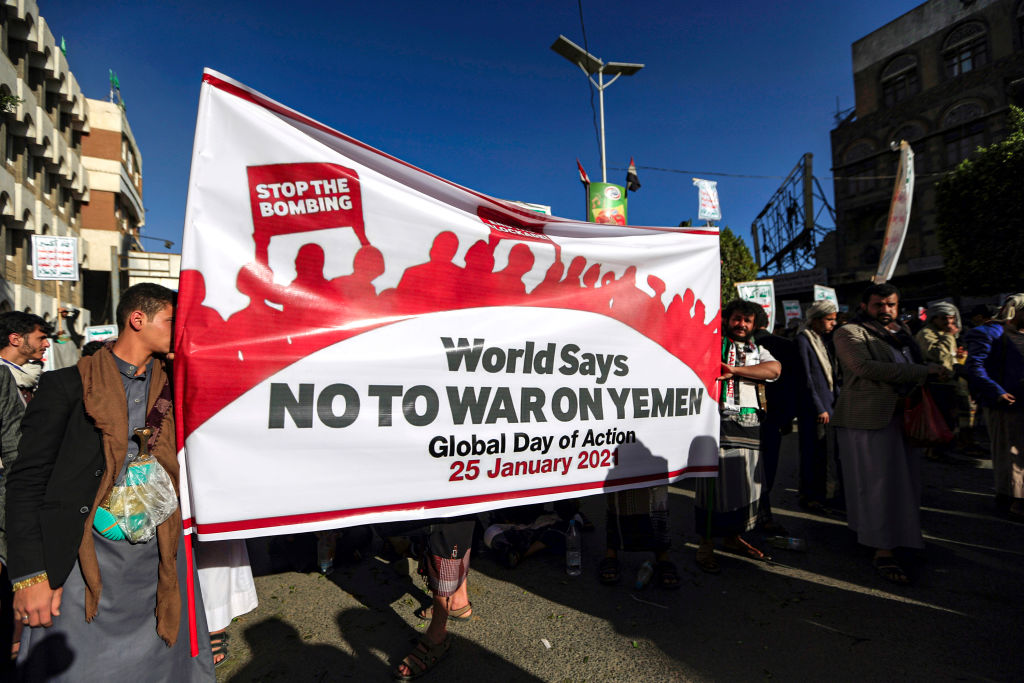 Protests in Yemen on the global day of action

The events of Monday proved that support for ending this war is now popular. Shireen was hopeful as she spoke at the global webinar alongside people like Representative Ro Khanna, Jeremy Corbyn, and Dr. Cornel West. Actor Danny Glover also got in on the action and called for Joe Biden’s administration to end support for the Saudi-led war. Shireen said during her speech, “One day Yemenis will have a chance to pick up the pieces and chart their own course free from international meddling and intervention. One day bombs won’t be dropped on innocent people in our name and those who profited from this war will be held accountable.” 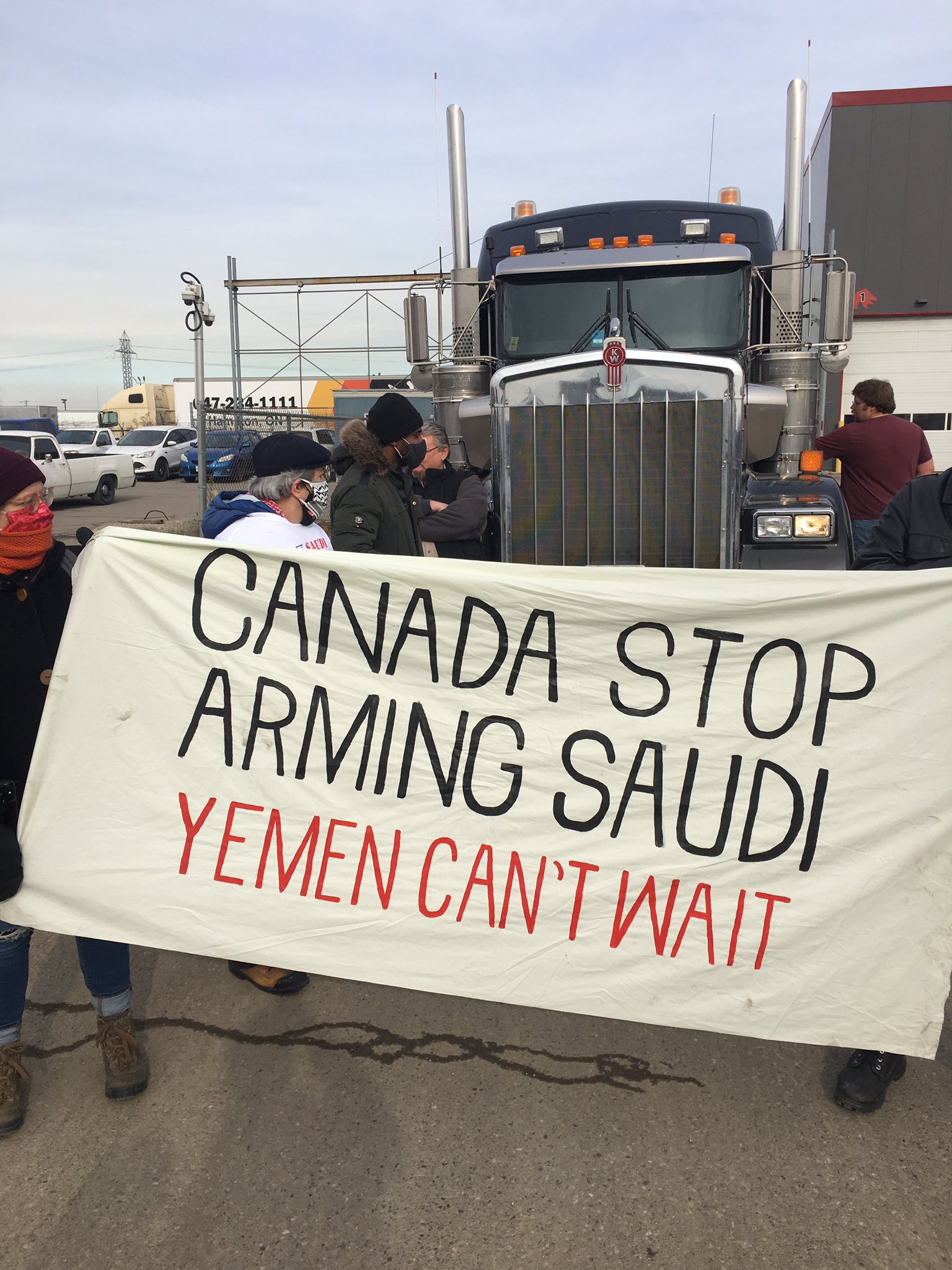 January 25th, 2021 marks one of the highest points in the movement for justice for Yemen. It is up there right alongside the US Congress making history by passing the War Powers Resolution back in 2019. 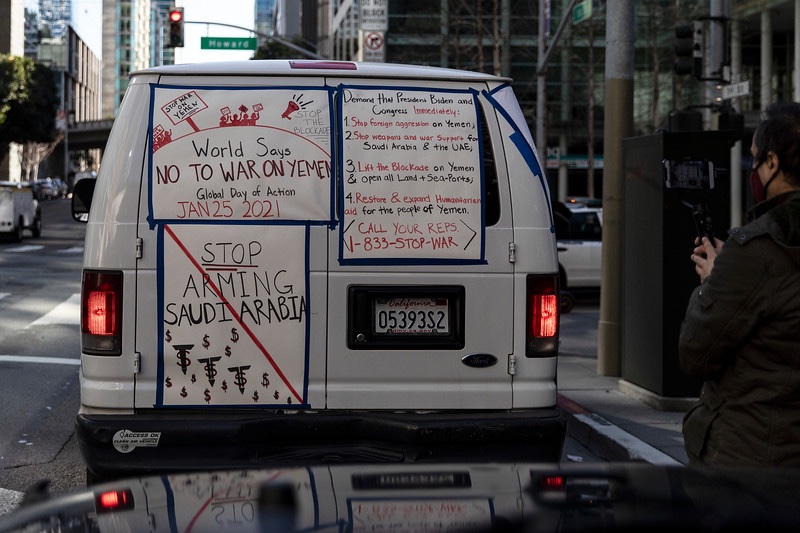 The Global Day of Action Rally in Chicago was something beautiful in its own right. In the same city where I was brought into the Yemen advocacy family, I chanted in the freezing cold and snow with people I had seen at other Yemen events, and people who were joining us for the first time. In Canada, activists blocked Paddock Transportation trucks, which are responsible for transporting military equipment that is headed Saudi Arabia. In the Bay Area, over one hundred cars joined a caravan to protest weapon company financier BlackRock. New York rallied outside of Representative Meeks’ office, and people in Yemen protested against foreign intervention in their country. 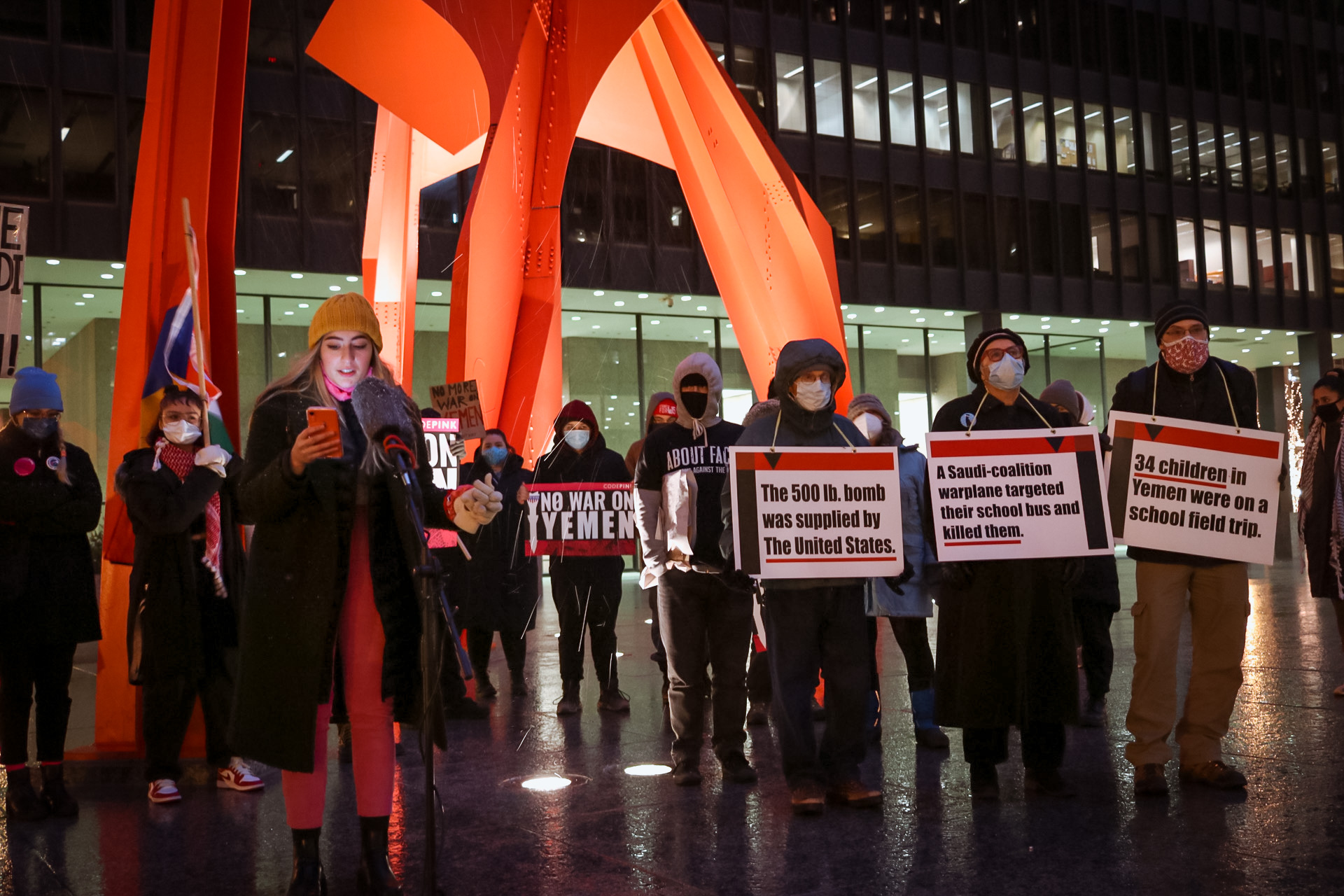 Danaka of CODEPINK speaks at the January 25th rally in Chicago

Shireen ended her speech at the global webinar by saying, “Continue fighting for the sake of 30 million Yemenis no matter how long it takes, no matter how lonely it gets, no matter how difficult it is, because Yemen matters and Yemen can’t wait.” On January 25th, thousands of people across the world sprung into action because it was just the right thing to do. Any world leader who thinks they can get away with complicity in this war vastly underestimates the passion and interconnectedness of the peace movement. 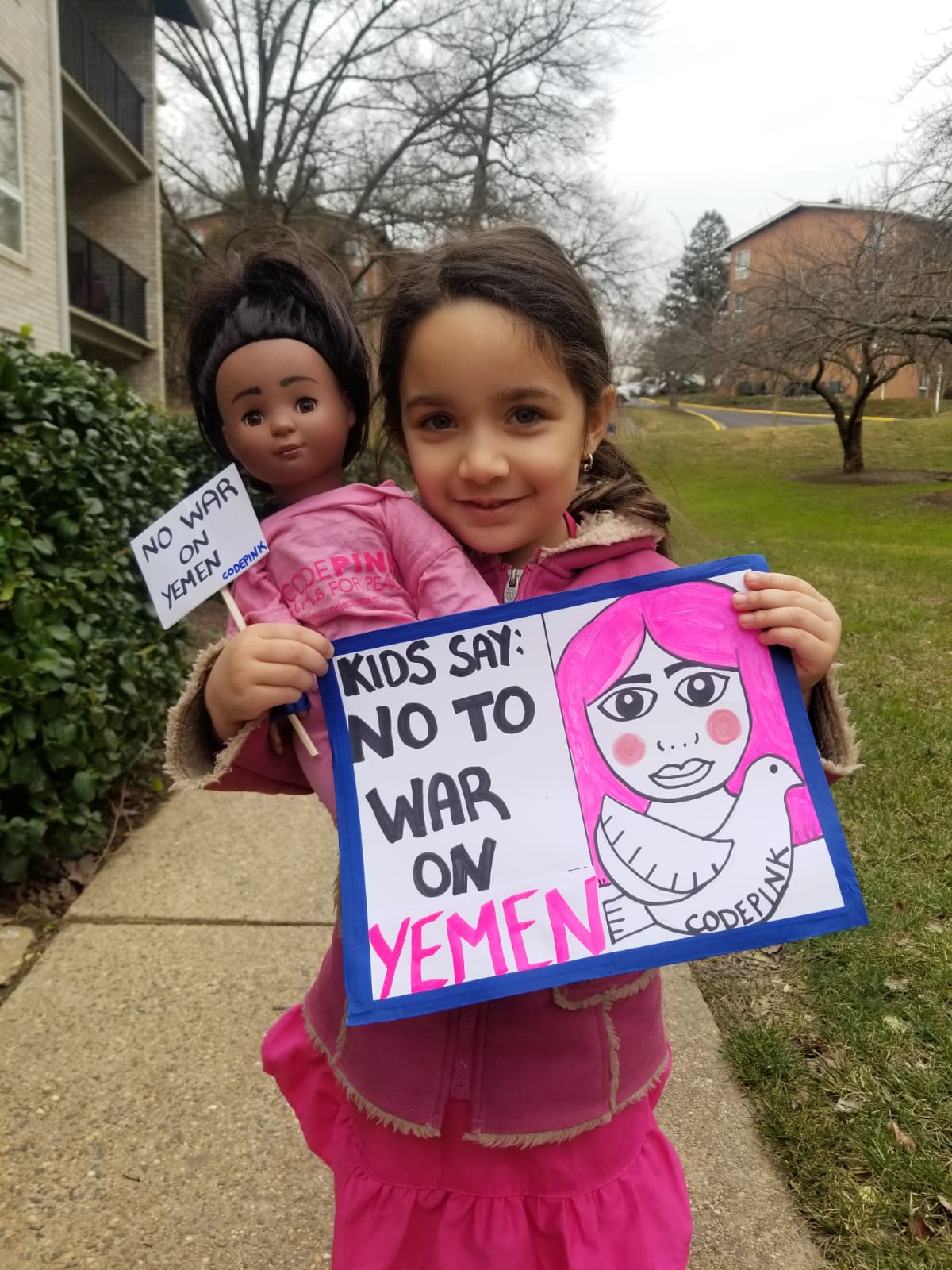 This war is not over, and there is still work to be done. All of us should be calling our Representatives in Congress at 1-833-STOPWAR and demand that they support a new War Powers Resolution for Yemen. Only two days after the global day of action, the Biden Administration suspended weapons sales to Saudi Arabia and the UAE. That is a big win, and we need to make sure those deals are suspended permanently. Sign CODEPINK’s petition to President Biden and Secretary Blinken asking them to permanently halt the sales here! With continued effort, we can end this war together.