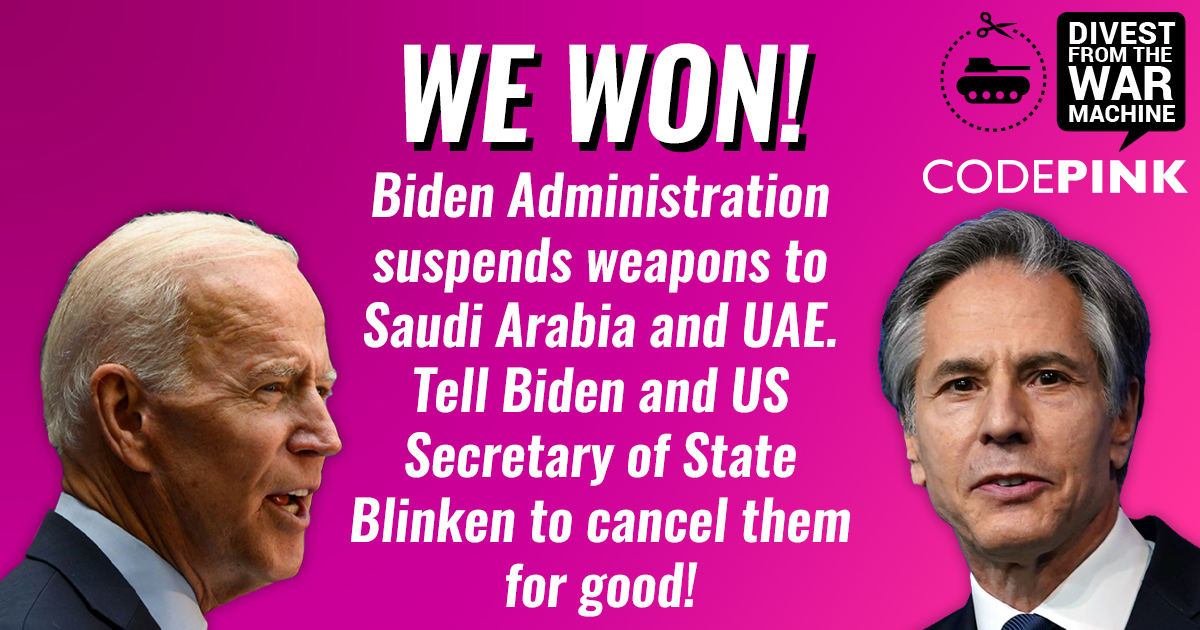 Add your name to the petition to President Biden and Secretary Blinken urging them to permanently end weapons sales to Saudi Arabia and UAE.

We were excited to learn that the United States would be halting some arms sales to Saudi Arabia and the United Arab Emirates and that “offensive” support for Saudi Arabia’s war in Yemen would be stopped by your administration.

We are now asking that you permanently halt all arms sales to both countries.

The CEO of Raytheon Technologies, Greg Haynes, has already planned for a certain arms sale to Saudi Arabia to not go through. We are asking you to make that expectation reality by permanently suspending these massive sales to Saudi Arabia.

The Saudi government has shown, time and time again, a lack of respect for the human rights and self-determination of the Yemeni people, and the United Arab Emirates has been Saudi Arabia’s loyal ally throughout this war. Since March of 2015, the Kingdom of Saudi Arabia, with help from the UAE, has been bombing and blockading Yemen. This has created what the UN calls the “world’s worst humanitarian crisis.” Nearly 80% of Yemenis rely on humanitarian aid. But instead of sending aid to Yemenis, American companies are profiting by sending the weapons that kill them. In one instance, a Lockheed Martin bomb sold to Saudi Arabia by the United States was dropped on a school bus in Yemen two years ago, killing dozens of children on their way to a field trip. From this event, we know what Lockheed Martin’s weapons are used for: to injure and kill innocent children. One of the recent suspensions was a transfer of $23 billion in Lockheed Martin-made F-35 jets, and we are thrilled that this sale will not go through. All other sales to Saudi Arabia must also be canceled and no new ones made.

There are credible reports that U.S. weapons sold to the UAE have been transferred in Yemen to groups linked to Al Qaeda, hardline Salafi militias, and Yemeni separatists. The UAE was also stung by revelations of secret prisons it had been operating in Yemen where prisoners were subjected to horrific forms of torture, including “the grill,” where victims were “tied to a spit like a roast and spun in a circle of fire.” In Libya, the UAE has been criticized for violating a 2011 UN Security Council arms embargo by supplying combat equipment to the LAAF, the armed group commanded by General Khalifa Haftar with a well-established record of human rights abuses.

I am tired of Saudi-led war being waged in my name with weapons that say “Made in the USA.” We cannot allow American weapons companies like Raytheon and Lockheed Martin to continue to profit by arming the Saudi regime and the UAE.