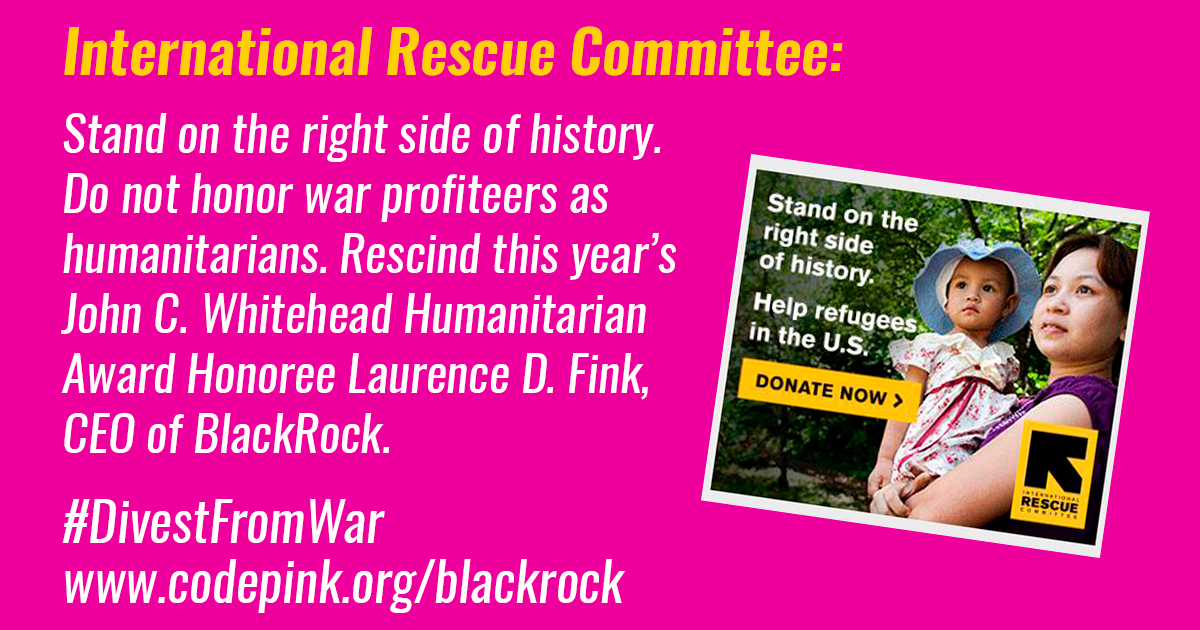 This November, the International Rescue Committee (IRC) is scheduled to award the CEO of BlackRock Laurence D. Fink with the John C. Whitehead Humanitarian Award. Honoring Larry Fink with a humanitarian award directly contradicts the mission and vision of the IRC. Fink and BlackRock are top investors in weapon companies. The guns and weapons made by these companies create refugees and internally displaced persons; they do not promote a just and humane world.

Tweet at celebrity supporters and donors to ask them to rescind Fink's Award.

Tell the IRC on their Facebook page to rescind Fink's Award.

Sign the petition to the IRC to stand with activists around the world.

Tweeting at celebrity supporters and donors is a critical way to let them know that while we support the IRC's work, they need to rescind this endorsement. Just click the links below to tweet and take action:

Already tweeted at today's target? You can also send a message to

To keep the action going join our social ambassador team and you’ll get an email 2–3 times a week with more twitter actions.

We want to make sure we send a clear message to IRC. Use either of these messages below. Just copy the text and go to the IRC Facebook page to post it. If you want to have a bigger impact download the images and share those too. 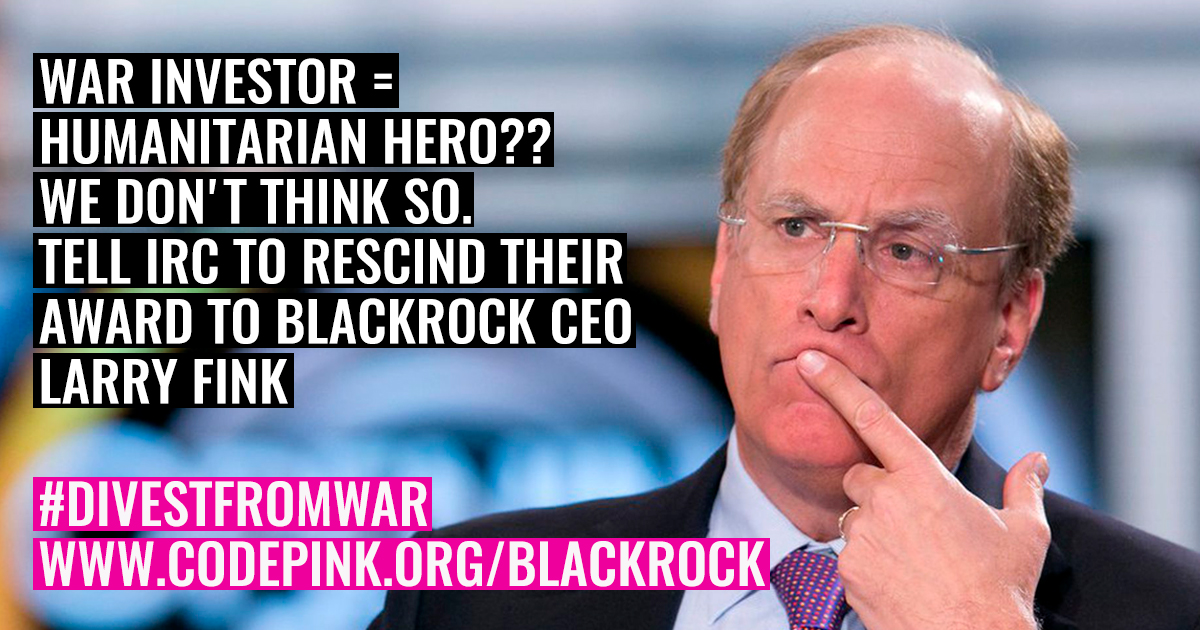 The International Rescue Committee helps refugees gain a foothold in their host countries. The work is commendable, however, honoring Larry Fink the CEO of BlackRock with a humanitarian award directly contradicts the mission and vision of the IRC. Fink’s company props up weapons manufacturers which undermines any possibility of diplomacy between countries and prevents the proper compassionate care of refugees and internally displaced persons. Rescind your award to Larry Fink www.codepink.org/irc #divestfromwar 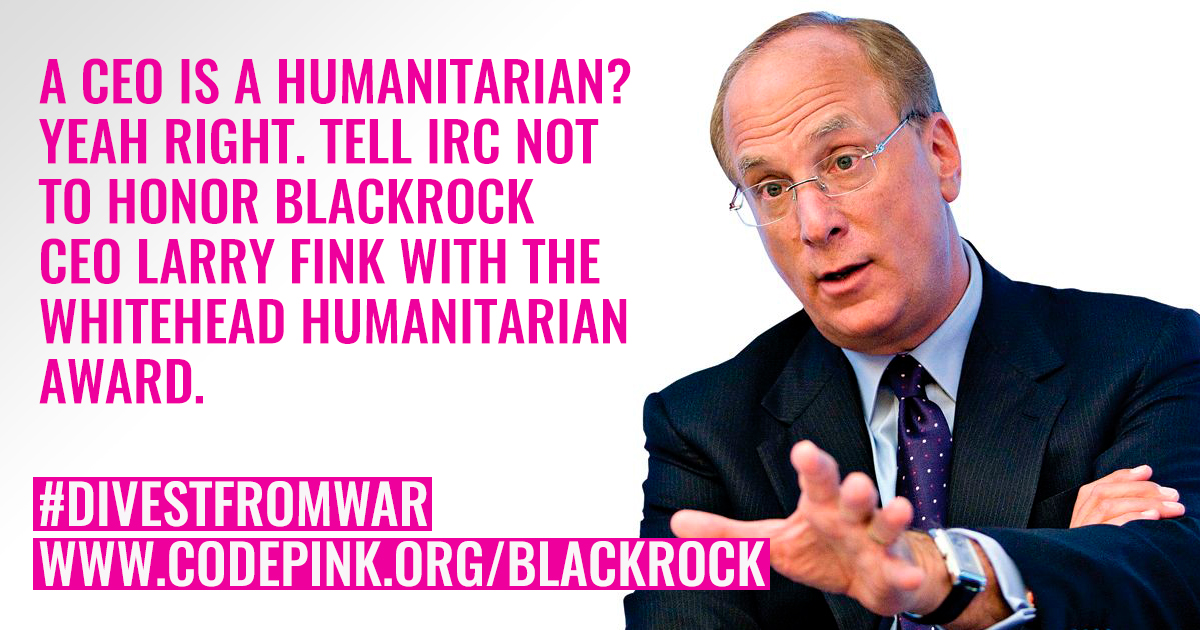 The International Rescue Committee does incredible work to support migrants and refugees fleeing war and violence across the globe, so it is mind-blowing that they would honor a war profiteer like the CEO of BlackRock Larry Fink. Fink and his investors reap huge profits from guns and weapons. The IRC must rescind its award to Larry Fink www.codepink.org/irc #divestfromwar

We want to thank the International Rescue Committee (IRC) for its ongoing work to support migrants and refugees in conflict regions across the world. It is through the work of the International Rescue Committee that refugees are able to gain a foothold in their host countries. Today, we are our sharing our concern over this year’s John C. Whitehead Humanitarian Award Honoree Laurence D. Fink, CEO of BlackRock.

Larry Fink has stated that he would hold companies accountable for being responsible corporate citizens. His comments made waves in the business world. However, under his watch, BlackRock maintains significant stakes in weapons companies around the world. The products made by weapons manufacturers create refugees and internally displaced persons. They do not promote a just and compassionate world, which is why we are calling on BlackRock to divest its assets from weapons and warfare.

Because Larry Fink continues to profit from war, weapons, and violence, we are asking you to reconsider honoring him with a humanitarian award. As you know, the two leading contributors to the current global refugee crisis are climate change and war. Rewarding Mr. Fink’s profits from weapons and violence while you seek to assist the people impacted by these wars undermines the valuable work that IRC is doing around the world.

The military-industrial complex dominates U.S. spending and spreads death and destruction at home and abroad. Investing in weapons of war means that we are making a killing on killing – hardly the humanitarian way to run a business.

In 2016, the U.S. dedicated over $700 billion of our tax dollars toward the Pentagon, which amounts to 64% of federal discretionary spending; and half of the Pentagon’s spending goes directly to weapons manufacturers such as Lockheed Martin, Boeing, Raytheon, Northrop Grumman, and General Dynamics. This money is being used to engage the U.S. in seven active conflicts around the world, to give military support to the disastrous Saudi-led war on Yemen, and to support Israeli suppression of Palestinian human rights. As you have documented in your country file for Yemen, it is the world’s worst humanitarian crisis. U.S. weapons manufacturers have sold more than $650 million worth of arms to Saudi Arabia and the United Arab Emirates to support their war in Yemen. This includes small arms, precision-guided bombs, and so-called “dumb bomb” conversion kits. BlackRock and Mr. Fink own billions in shares of the companies who are arming Saudi Arabia and the United Arab Emirates, which means he is actively profiting from the worst humanitarian crisis in the world.

The massive profits these companies rake in are made on the backs of civilians in poor countries such as Yemen, who are paying the ultimate price of war. General Dynamics is a prime example of a company profiting from those who are suffering. The military contractor has taken a government contract to provide “social services” to migrant children held at U.S. detention camps. In the past, General Dynamics has provided weapons to Saudi Arabia, Israel, Iraq, and Turkey, and directly benefited from the U.S. invasion on Iraq. IRC has condemned the actions at the border, and the separation of families. We are urging you to reconsider honoring Mr. Fink, as he profits from those displacements and gross human rights violations.

Honoring Mr. Fink with a humanitarian award directly contradicts the mission and vision of the International Rescue Committee. His company’s insistence on propping up weapons manufacturers undermines any possibility of diplomacy between countries and prevents the proper compassionate care of refugees and internally displaced persons.

We strongly urge you to reconsider your award to Laurence D. Fink.