If you're feeling skeptical after hearing President Obama's latest speech on the withdrawal of US troops from Iraq, you're not alone.


It's hard to know what to make of a President and an administration that brings over 90,000 troops home while ordering 50,000 soldiers along with 75,000 military contractors to remain.

Over 150,000 personnel are still stationed in Iraq and the US is supposed to be completely out of the country by 2011. That's next year. Bringing home thousands by the end of this August is a good step, but we really need to step on it. Obama's speech strikes me as an exercise in Orwellian double-think: the US is simultaneously withdrawing and expanding its military presence in Iraq. So which is it? And, importantly, how does the peace movement communicate with people who think the war is effectively over at the end of August?

Jeremy Scahill has written recently in The Nation that "Secretary of State Hillary Clinton is presiding over what is shaping up to be a radical expansion of a private, US-funded paramilitary force that will operate in Iraq for the foreseeable future...".

Unfortunately, the State Department is dragging its heels as much as the Pentagon and has requested funds from Congress to hire 6,000 - 7,000 more "security contractors" and train them like soldiers. While working under the auspices of the State Department, these new personnel would have the status of “diplomats.” But who ever heard of a diplomat trained like a soldier and armed with a gun? 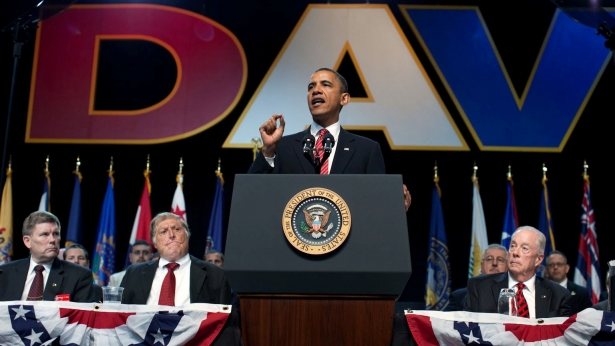 This one step forward, one-hundred steps backward approach to Iraq makes many a head spin, but one thing is clear: That so many troops are coming home so soon after Obama took office a year and a half ago is a victory not of the war, but of the peace movement.

As Obama emphasized in his speech, by the end of August over 90,000 troops will have come home since he took office and hundreds of bases will have been closed or turned over to Iraq.

The work of countless activists and organizers has changed the political landscape and now we're seeing some results. We've marched, protested, signed petitions, and written letters to the editor. Without the peace movement's dedicated organizing and mobilizing to elect a candidate who would commit to ending this war, we wouldn't be seeing so many of our soldiers returning "as promised and on schedule" during this "season of homecomings," as Obama put it. But we still have a long way to go. In his recent speech, Obama didn't say a thing about military contractors, or those so-called diplomats who are doing the work of soldiers.

And, unfortunately, Obama plans to keep another, more disastrous, promise of his this year -- to escalate the war in Afghanistan. Will our troops come home from Iraq only to be redeployed to Afghanistan?

Unlike under Bush, there will be no speak of "Mission Accomplished" in Iraq from the Obama administration. We have helped turn the tide of public opinion against the Iraq War enough that no one is buying it anymore. Partially thanks to WikiLeaks, few will be buying wholesale into the Afghanistan War either. The peace movement can make use of this new information to expose war crimes and bring this injustice to an end.

Before Obama took office, many of us began to feel hopeless about ending the Iraq War. Now we have to realize, with some healthy skepticism, that an end (of sorts) is in sight. What kind of end to the Iraq War do we envision and how are we helping to bring it about? How can we take the lessons learned from our organizing to end the Iraq War to our work to bring an end to the quagmire in Afghanistan?

Your voice is needed. Write a short Letter to the Editor or an online comment about the Iraq debacle.

With the troops coming home from Iraq, we should reflect on the results of this devastating invasion. We need to flood the media with our comments and our recommendations for lessons learned from this unjust war.

Click below to go to our Letter to the Editor page, where you can find newspapers near you to submit your letter to: