Here we are, a full three decades after Nasa scientist James Hansen raised the specter of a looming climate crisis with Congress, looking the first generation of severely impacted youth in the eyes and telling them they’re right: we have completely squandered their future. For too long our dominant  culture has practiced unsustainable growth and consumption, ushering in the end of a habitable planet and with it civilization as we know it, impacting first and foremost the cultures and communities who have contributed the least to climate change. This result is a direct extension of the settler colonization project that has unfolded across the globe over hundreds of years. Given this stark reality, It should come as no surprise that our youth are in crisis, and that they are leading the charge towards a wakefulness to the looming climate catastrophe.

Increasingly, we are linking movements across issues, eyeing the connections between the myriad problems we see in the world, many of them rooted in capitalist consumer culture. From an understanding of the need to tease apart incarceration from profit to outrage at our treatment of asylum seekers at our southern border, we’ve witnessed rapid wins in the movement to divest public dollars from the private prison industry, after years of hard work behind the scenes. The same asylum seekers who are fleeing nations ravaged by wars and conflicts--many driven directly by U.S. policy--and the impacts of climate crisis are being held in appalling conditions in concentration camps and prisons, many of them run by the private prison industry. We are encouraged by intersectional organizing, but where is the movement connecting the dots that link militarism, weapons corporations, migration, and the climate crisis? We are crystal clear on the impact: the Pentagon is the single largest consumer of oil on the planet but the nationwide call for a Green New Deal has not yet given attention to our military spending as either a massive driver of the climate crisis that cannot be ignored, nor as a source of much-needed funding for a project as massive as the Green New Deal.

Recent actions targeting the massive asset manager BlackRock are drawing attention to their investments in companies behind Amazon deforestation. Investing in these companies undermines our ability to maintain a livable planet, namely by destroying forests that are the lungs of the earth in the Amazon Basin. While BlackRock gives lip service to ethical investing and addressing climate change, they have actually increased their investments in deforestation-risk companies in recent years, drawing the ire of climate activists who are firm we cannot both cut down that rainforest, and keep human civilization. Here at CODEPINK we have also given considerable attention to BlackRock because they are the world’s top investor in weapons manufacturers. The same weapons that are used in wars and conflicts all over the world are a crucial component of the war machine that makes up a significant portion of the Pentagon’s fossil fuel use—the U.S. military has released 1.2 billion metric tons of greenhouse gases since the start of the global war on terror in 2001. Moreover, those same weapons are a major factor in conflicts that lead to migration by asylum seekers. Weapons which are in turn produced by corporations that are propped up by our public dollars, to the detriment of our communities. When our public institutions invest public money in weapons corporations like Boeing, Lockheed Martin, Raytheon, General Dynamics, and Northrop Grumman, they are underpinning the war machine that draws public dollars away from projects that benefit our communities and puts them instead into an already bloated defense budget. There is a clear thread running from the Pentagon budget to weapons corporations to our impoverished communities to migrants fleeing wars and drought to greenhouse gas emissions driving the climate crisis. Imagine a snake consuming its own body: that is the war machine’s connection to climate breakdown.  Our movements are weaker when we fail to make these connections. We must begin rapidly removing our public dollars from the war machine if we are to save humanity and the planet—which like the climate crisis and the war machine, cannot be separated. 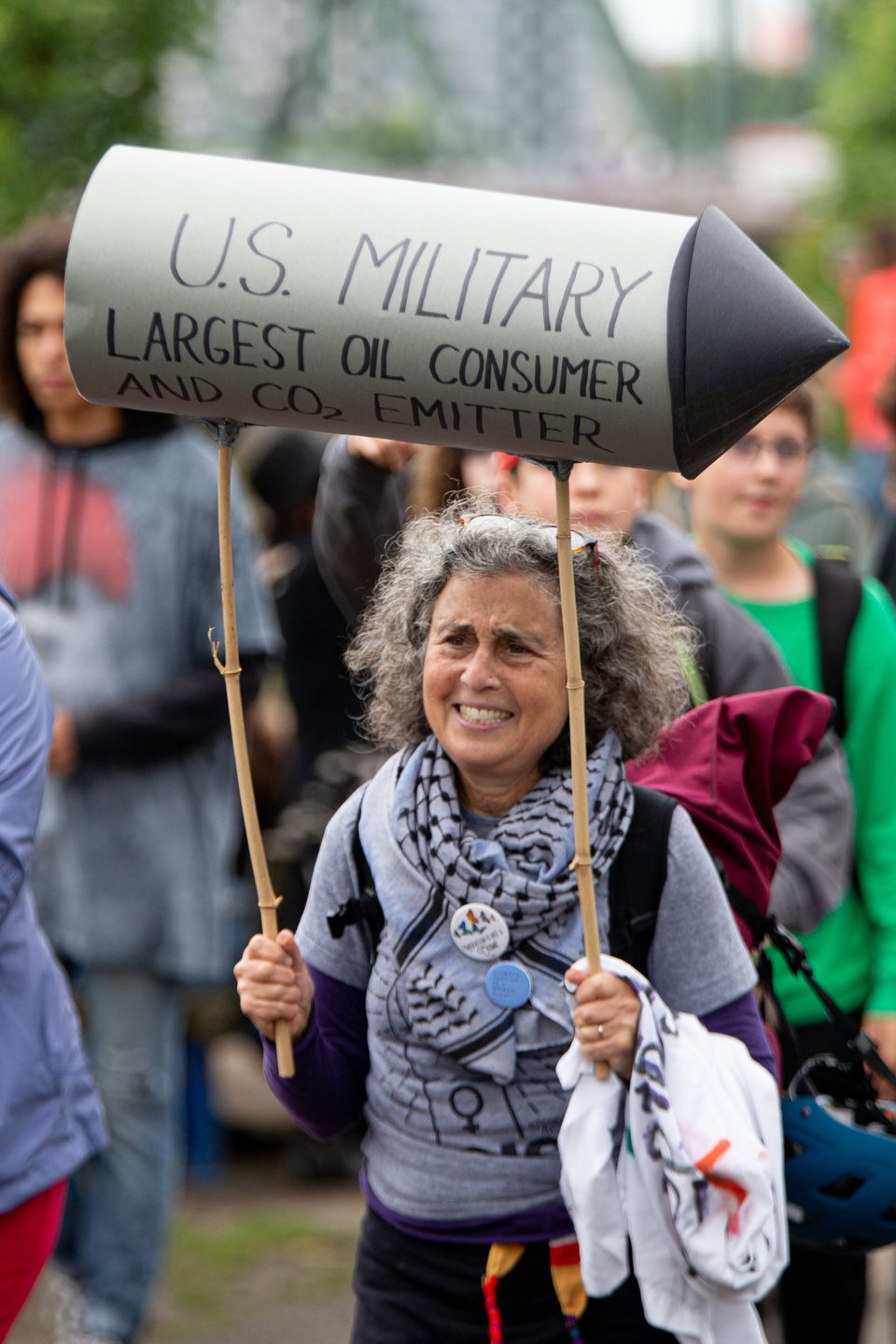 The time has arrived to build the next big divestment movement made up of people coming together across the planet to divest from the war machine. By withdrawing our public dollars from weapons corporations and putting them into local needs including local green new deals, housing, health care, and education, and by shifting federal spending from the Pentagon to the national Green New Deal, we will kickstart a domino effect. A movement to divest from the war machine  will remove the social licenses that allow weapons corporations to literally make a killing on killing, and the Pentagon budget to increase annually even when our military budget far-outpaces the military budgets of all other nations. The path to divestment has been laid by successful movements before ours; it is paved with the South African Apartheid regime, with coal and gas extraction companies, with gun manufacturers and tobacco companies, and with the private prison industry. The opportunities for divestment from the war machine abound. Cities, public pension funds, and university endowments invest public dollars in private corporations that often include weapons corporations, and elected public servants often accept campaign contributions from weapons makers. Together we can demand that they divest, that it is morally unacceptable to build our communities on top of global conflicts, and at the same time we must demand that we instead invest our public resources in projects that positively impact our communities, starting first with a rapid response to the climate crisis that is exacerbated by endless wars.