In spite of one of the stipulations of the ceasefire agreement of November 21, 2012 between the Palestinian Government of the Gaza Strip and Israel, in which it was agreed that there would not be  restrictions for farmers to work their land there, and that fishermen could fish up to 6 miles from the coast, the question is that Israel has not respected either of these commitments and has been attacking fishing boats arresting fishermen and destroying boats  and has repeatedly attacked and injured farmers.

That is why, a group of 14 solidarity activists have accompanied today the famers to their lands in Khuza'a, close to Khan Younis in the central Gaza Strip to try to prevent these attacks of occurring and if so, to monitor them.

Before our arrival, the farmers had tried to go to their lands alone by 8.30 a.m. and have told us that they were shot by Israeli soldiers that arrived immediately in tanks, bulldozers and jeeps and prevented them of working.

When we have arrived, we have deployed along the lands to be sowed at 100 meters from the separation fence. We were from France, Germany, Italy, Spain, UK and US and wore yellow and orange coats to advise of our presence. 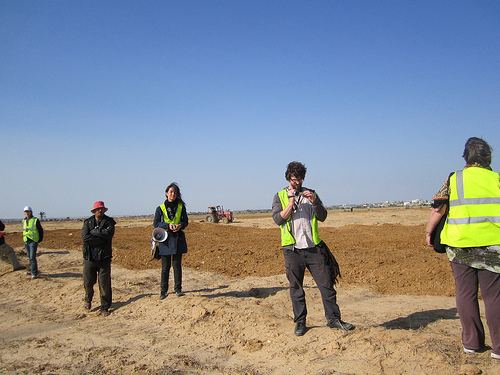 Shortly after our arrival, Israeli  jeeps have appeared and the soldiers have descended from them,  ordering the farmers and us to abandon the zone immediately. We have replied that we all were unarmed civilians and that according to the Ceasefire Agreement the farmers were exerting their right to work their land. We've told them as well the different countries we were from and that we were not going to abandon. They have insisted that we were closer than 100 meters and that we had to go away.  After about half hour exchanging messages, we retired some 10 meters. In the meantime, the farmers were working behind us who were standing between them and the soldiers, with a tractor on which there was also an international accompanying the farmer.  The farmers have sowed their land with wheat seeds. 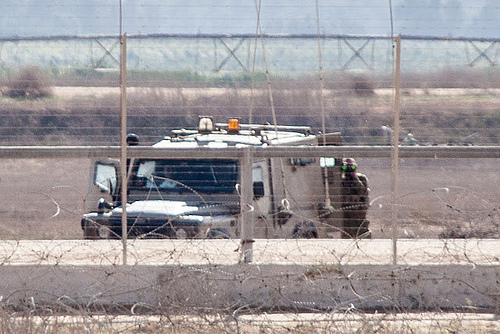 When today's work has ended at about 12.30pm, 7.5 dunams (a little less than one Ha) had been sowed and we have all  left with high spirits.

Tomorrow Tuesday, we'll return there to continue our task of solidarity to farmers.