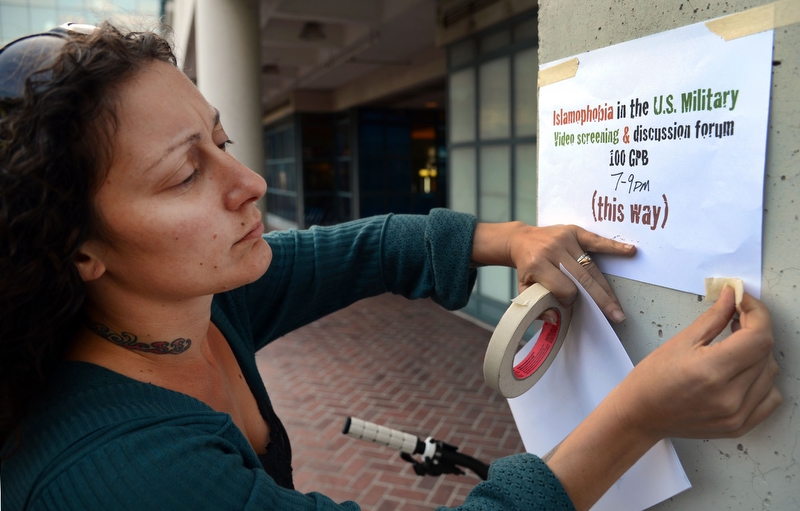 "The U.S. has caused more instability to the Iraqi people in the last twenty years than any other threat. By first supporting and arming Saddam, then sanctioning him, and then toppling his country's entire infrastructure with bombing and occupation, we have caused this disaster in Iraq. Military intervention didn't bring peace and security to Iraq during eight years of active combat, and it won't do so now. For anyone who disagrees, I'd compare it to attempting to bomb a piano into playing a symphony - all you'll end up doing is destroying the instrument." – Emily Yates, Iraq War veteran, IVAW member, writer and musican

As horrifying news and images flood in from Syria and Iraq, with the threat of US bombing, drone strikes and, US troops um, “advising” Maliki’s Army, let's remember: good things DO happen.

This week, the unexpected came to my emailbox.

The first was a request from Emily, with whom I taught a short writing course for veterans in summer 2011, asking me to put her in touch with a CODEPINKer in Philadelphia as a speaker for a rally on the First Amendment that Emily is organizing. Of course, I was delighted to do so.

In return, I asked Emily for her thoughts on the escalating situation re the US and Iraq, and she sent me the above quote which weaves together recent tragic history, analysis, and a music-centric metaphor. How I wish Ms. Yates, with her gift for clever and honest turns of phrase and her hard-earned experience in Iraq, could be all over the Sunday TV talk shows instead of the “key lawmakers” as CBS's "Face the Nation" webpage delicately describes war propagandists in the US government.

The other piece of news concerns my hometown of Concord, California.

“…a substantial portion of the former Concord Naval Weapons Station will become an East Bay regional park of over 2500 acres, thanks in large part to the work of the CNWS Neighborhood Alliance” announced the email from East Bay Regional Parks.

In the 1980s, the CNWS, located near the Carquinez Straits in the Bay Area, was a heavily protested location where weapons and ordinance were put on trains to the Straits, then loaded onto ships and sent to the wars of Central America. Long before there was an Occupy movement, people came with tents and sleeping bags and created a years-long encampment under the name of Nuremberg Actions (http://www.nurembergactions.info/) near and sometimes ON the train tracks. A huge area on the outskirts of the largest suburban city in Contra Costa County, with gorgeous views of Mt. Diablo and its foothills, was given over the storage and transport of instruments of death, including chemical weapons.

But two decades later, thanks in part to antinuclear, antiwar and antimilitarism activism over the years, this weapons station has been turned over for cleanup and civilian use, which will include the newest addition to the remarkable existing network of green and open space in the East Bay. I look forward to walking the land and taking photos there someday.

Let’s make the effort. As the 4th of July rolls around, let’s learn and teach our activist history – and make some by averting a US bombing campaign in Iraq. Here are NEW action ideas: http://codepink.org/blog/2014/06/no-new-war-on-iraq-action-toolkit/