In Europe, Anti-Semitism Allegations Are Used to Silence Dissent Against Israeli Policies Toward Palestinians 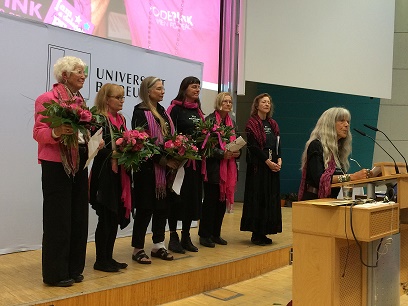 Earlier this year, CODEPINK: Women for Peace was chosen to receive the Wilhelmina von Bayreuth Prize for Tolerance and Humanity by the City of Bayreuth, Germany. Soon after the announcement of the award, Benjamin Weinthal, a staffer of the Foundation for the Defense of Democracies, a right-wing think tank closely aligned with Israel, published an article in the Jerusalem Post, claiming that CODEPINK is a Holocaust-denying, anti-Semitic organization. The main argument referenced CODEPINK's support for the Boycott, Sanctions and Divestment (BDS) movement. Weinthal followed up the initial article with several more to continue the smear campaign against CODEPINK.

Weinthal is spearheading a campaign throughout Europe to silence any challenge to the state of Israel's apartheid wall, illegal settlements, imprisonment of Palestinians without trial, inhumane checkpoints and land and sea blockade of Gaza. His systematic and frequent anti-Semitic accusations have created a climate of fear in Germany and Austria. As a result of his intimidation tactics, several events with organizations and speakers who oppose Israeli actions toward Palestinians have been cancelled.

The false allegation of anti-Semitism scared the Mayor of Bayreuth and she suspended the award. This led to a tremendous outpouring of letters from persons who know about the work of CODEPINK and cited the difference between criticism of the policies of the state of Israel and anti-Semitism. Even members of the German Parliament weighed in, with 10 of them signing a letter in support of CODEPINK. The City Council of Bayreuth demanded a vote, and approved the reinstatement of the award.

By the time our seven-person delegation arrived in Bayreuth on April 15 to receive the award on behalf of CODEPINK, news reports were still publishing the false allegations and adding statements by the Israeli Ambassador to Germany that any organization that participates in the BDS movement was repeating the actions of the Nazis in their "Boycott Jews" program.

In February, 93-year-old Hedy Epstein, whose family was killed in the Holocaust, was accused by Weinthal of anti-Semitism because of her approval of BDS actions. Epstein was to speak in March 2016 at a conference called "In Grandmother's Words...The Fate of Women in the Second World War." She was invited as a witness of the Holocaust to talk about her experiences when she fled Nazi Germany in 1939 with the British-sponsored Kindertransport operation. The entire event in Vienna, Austria was cancelled due to fears of allegations of anti-Semitism.

The 2016 Anita Augsburg prize for "excellent commitment to peace, women's education and equality" was awarded by the Equal Opportunity Commission of the City of Munich, Germany to the Munich chapter of the Women's International League for Peace and Freedom (WILPF).

However, the March 2016 award ceremony was cancelled by the Munich City Council and the prize rescinded due to unfounded allegations of anti-Semitism equating WILPF's work on Palestinian rights as anti-Semitic. WILFP is the oldest women's peace and human rights organization in the world, having celebrated its 100th anniversary in 2015. In their press release concerning the City Council denying WILPF the award, the organization stated that "Anita Augsburg would be turning over in her grave to know that WILPF had been accused of anti-Semitism."

To assist the discussion of the difference between legitimate criticism of the policies of the State of Israel and anti-Semitism, CODEPINK announced at the award ceremony in Bayreuth that CODEPINK would use the award money to sponsor a symposium in Europe to discuss this difference and how false allegations of anti-Semitism have been used to silence this criticism. The symposium will be conducted by human rights organizations and will include representatives of all views on this issue. The date and location of the symposium will be announced in the near future.

Anti-Semitism in today's world is very real, and very disturbing -- but so is conflating criticism of the state of Israel with anti-Jewishness. Palestinians, just like Jewish people (and all people in the world), deserve to live with human rights and dignity, and not in fear. Censoring and denying their plight only perpetuates their suffering and does a disservice to those who declared "never again."

"Never again" means for everyone.