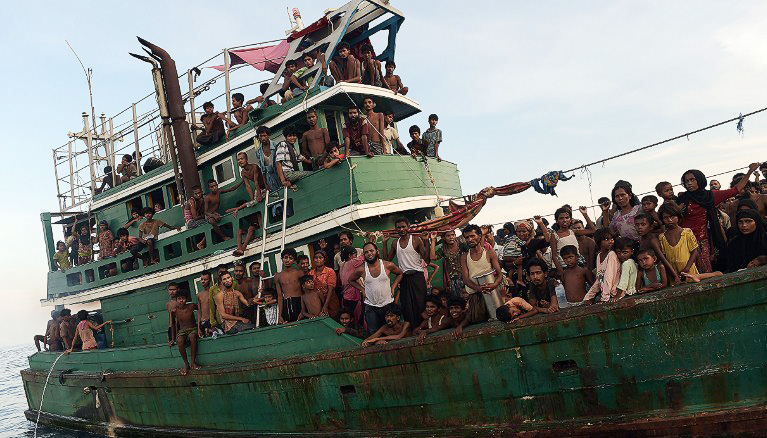 We at CODEPINK, an organization that supports human rights and champions causes for peace, stand firmly in support of the U.N.’s negotiations with the Government of Myanmar for humanitarian access to all areas of the Rakhine State, and for the U.S. to provide humanitarian assistance to the Rohingya refugees currently adrift in the Andaman Sea. Furthermore, we urge President Obama to condemn the Burmese government’s humanitarian infractions and support a legitimate pathway to citizenship for the Rohingya people.

Right now thousands of Rohingya migrants–– many of which are young children–– remain stranded in the Andaman Sea. They are floating aimlessly with dwindling rations and supplies. Despite U.N. Secretary General Ban Ki-moon insistence that Southeast Asian leaders uphold international law and the obligation of rescue at sea, surrounding countries such as Indonesia, Thailand, and Malaysia are refusing to accept what has come to be known as the "boat people." What is currently happening is a humanitarian crisis of epic proportions. The inhumane situation in the picture you see above is compounded by the deliberate denial of humanitarian assistance.

The Rohingya, a stateless group of 1.3 million Muslims, live in the Buddhist majority nation of Burma (formerly known as Myanmar). The long-persecuted Rohingya minority mainly live in Burma’s western-most state of Rakhine, and are dubbed by the U.N. as “one of the world’s most persecuted peoples.” The Burmese government refuses to grant them citizenship and claims they are interlopers from neighboring Bangladesh, albeit many have lived in the Burma for generations. Bangladesh also shuns them as non-citizens. Rohingya in Burma for the past 20 years have faced restrictions on travel, education, marriage, and land ownership. When politically beneficial to the military-subjugated government, Rohingya have occasionally been allowed to vote. Furthermore, their marginalized role within Burmese society has left them vulnerable to be picked up by human traffickers. Often desperate to escape their dismal living conditions by any means necessary, the Rohingya minority are at high risk to trafficking and exploitation.

According to UN Assistant General-Secretary for Humanitarian Affairs, Kyung-hwa Kang,  who visited camps for internally displaced people in Rakhine State in June 2014 she witnessed “a level of human suffering in IDP camps that I have personally never seen before, with men, women, and children living in appalling conditions with severe restrictions on their freedom of movement, both in camps and isolated villages. Many people have wholly inadequate access to basic services including health, education, water and sanitation.” According to the United Nations High Commissioner for Refugees (UNHCR) around 800,000 Rohingya living outside the camps are also in urgent need of assistance. In some areas the rates of malnutrition are over 20 percent and the provision of health services is almost non-existent.

On Friday, May 15, 2015, President Obama announced a renewal of U.S. sanctions on Burma due to its humanitarian violations. These sanctions against Burma are not enough. Migrants have found temporary shelter at the port of Julok village in Kuta Binje, Indonesia's Aceh Province, and according to the BBC on May 22nd  Burma rescued more than 200 in its waters. However, their stateless status will endure, and what steps the government plans to take  next with its refugees is still has yet to be known. Moreover, there are still hundreds more out at sea.

The US must send desperately needed humanitarian aid to the thousands of abandoned and stateless refugees at sea. On May 29th 2015, Southeast Asian nations will gather at a summit to discuss the crisis. On the heels of this summit, it is imperative for the U.S. government to place pressure on Southeast Asian nations to reverse their policy of turning away boats from their borders and for Burma, to create an actionable and reasonable track for citizenship for the Rohingya.

The scale and scope of this humanitarian crisis must not be a reason for inaction. Let this spur a continued commitment to work together to put a halt to the escalation of  misery.