I Was Born Blind 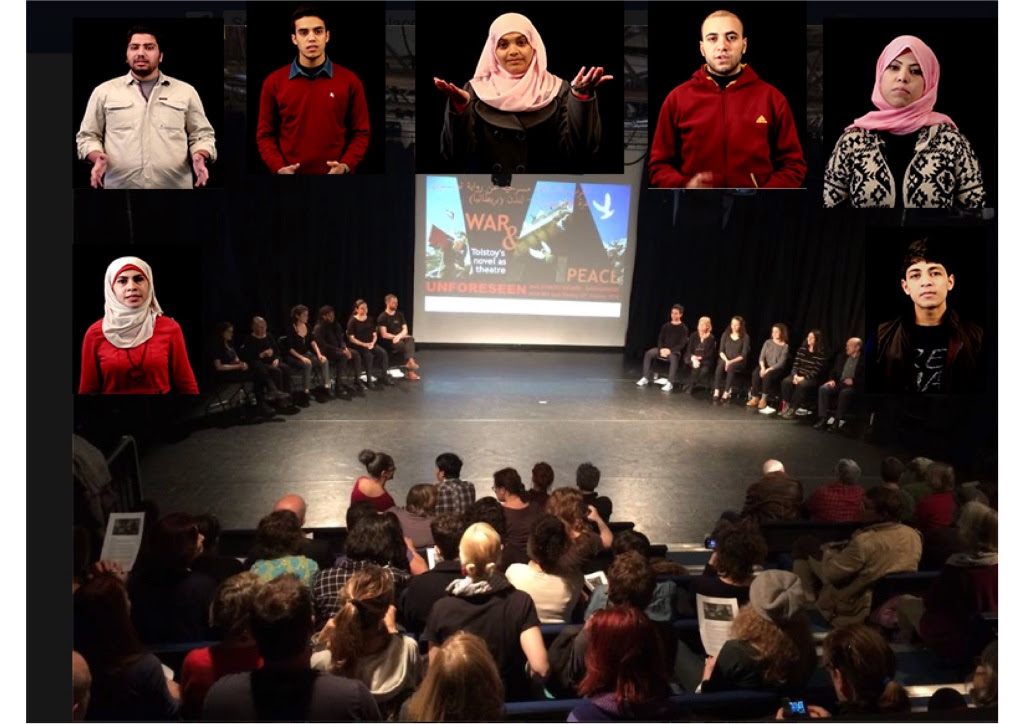 By Enas Farres Ghannam, contributor to We Are Not Numbers

Note from the director of We Are Not Numbers: Seven of our writers recently participated in a drama workshop led by Hossam Madhoun and Jamal Rozzi, who run Gaza's Theater for Everybody. Theater is a rarity in Gaza, so this was a special treat -- an opportunity to explore another mode of self-expression. The workshop culminated in an exchange with London's Az Theater, where viewers watched videos of the young performers and then engaged in a Q-and-A. This is the first in a series, focusing on the poems the youth wrote and their performances, beginning with Enas Fares Ghannam.

I was born blind, but that was ok, for everyone my age was born blind too. My father and mother said they had sight once; and they kept telling me stories about what life was like then: fairytales about people they saw, places they visited, flowers of every color possible but black, but I never understood what they were talking about.

I was born blind, but that was ok, because you don’t miss what you don’t have. But my parents seemed to, for they kept talking about mountains they climbed, forests they passed through, rivers they camped beside, and lots and lots of things that you and I know are no longer true.

Recently I’ve been having strange dreams. I see myself looking at the sky, but it is not black anymore. Someone or something gave it this … this amazing color. But that is not all; I see myself dancing, painting, singing; I'm holding my passport, waiting in line to travel; I'm riding in my car with my friends to visit a city of my country, using only a map for directions; I'm acting in a theater; I'm writing stories; I … I'm happy; I'm different; I'm alive. Then suddenly… black comes back.

I remember I was born blind. But for the first time, it is not ok.

I was guided by the sound of the generator. It was 7 on a Sunday evening. The weather was extremely cold; it seemed like it was raining like it had never rained before. The streets were dark. I went inside. There was a weak light coming from a lamp in the room. There were about a dozen chairs and a laptop in the middle of the room, connected to a projector, showing a Skype page, while Mr. Hossam and Mr. Jamal tried to connect with London. The boys sat in a circle, talking and laughing. The girls discussed what kind of questions they needed and wanted to ask. Two men I didn’t recognize were moving around, connecting some cables or checking the generator, which was not working well. The electricity had shut off at 6 p.m. and only one hour was left before the Skype event was to start. So, the men brought in a 1volt-amp generator (which is usually not very strong) to give us a short time of electricity. The generator was old and small, so the electricity kept coming and going.

I sat alone, observing and thinking, "Wow, we are here at last."

Two months ago, I went to the Euro-Med Monitor for Human Rights headquarters to attend a workshop organized by the We Are Not Numbers program. We usually have a workshop every week or two to meet with a successful writer or journalist or activist and learn from their experiences.

That day, the workshop was led by Hossam Al-Madhoun and Jamal Al-Rozzi, both actors, directors and writers. They performed a skit based on Tolstoy’s “War and Peace,” which they had performed in the theater. While everyone was focusing on the play and its purpose, I was observing one girl who was acting three characters. In each role she performed, she was different. I thought she was brilliant.

Mr. Hossam and Mr. Jamal offered us the chance to participate in a drama workshop, which would culminate in a production presented “virtually” to a British audience. I thought, “Let's give it a try!” On my way home, I was thinking, “What am I doing?” As a shy person, I thought I would never be able to act or communicate with people freely.

In the first workshop, Mr. Jamal crumpled a piece of paper into a ball and asked, “What do you see in this paper?” He wanted us to use our imaginations; to see an image in our minds so completely that we can answer any question about it. One participant said it was a spoon, and began eating with it. Another said it was soap and cleaned his hands, etc. What was important was not what is was, but that we believed. “What is it?” he asked. “Where are you? What are you doing with it? Who's next to you? Are you sad or happy?” This forced our imaginations to come alive. My heart was beating fast every time I performed.

Later, we closed our eyes and focused on the atmosphere in an attempt to imagine stories behind the sounds we heard. When each of us told his/her story, we were surprised at the way our minds differed when interpreting the same sounds. By the end of the first day, I felt more “free” than I ever have.

In the following sessions, which we had every Saturday, we imagined new situations and living them as if they were truly happening. This was exciting, because it allowed us to pretend we were different characters. We were acting, thinking, performing as the character required. I was surprised at my ability to act.

Mr. Hossam and Mr. Jamal asked us to step in front of everyone and act something out, then the others had to continue the scene spontaneously. One person would act as if he was flying a kite, for example, then freeze and the rest of us would think of how to add to this scene: one played on the sand, another listened to music and another played guitar on the street.

During the final sessions, we were asked to write a poem about what freedom meant from our point of view, but without using the word itself, if possible. At first, I was a little stumped. But then I remembered a story I once wrote, about a boy who was born in prison. I also remembered H.G. Wells' story, “The Country of the Blind.” They came together in my mind, and I applied these ideas to our conditions here in Gaza under siege. When I wrote my piece, “I was born blind,” I was proud of the result, but I didn’t call it a poem. In fact, I never thought I could write poems.

We rehearsed how to act out the poems, and then we videotaped them. It was stressful, but breathtaking, to stand in front of a camera.

"Come everyone, let's watch the videos." This was Mr. Hossam, calling us when a stable generator was available. We were waiting for the Az Theatre in London to contact us, to watch our videos and have a Skype conversation.

We all sat next to each other, cheering each other as we watched them. Hazem Al Abyad, a talented videographer, had inserted pictures that contradicted our words to achieve greater effect. When my video finished we all laughed at the final scene; instead of cutting when my poem finished, Hazem showed our smiles and hope despite everything.

Then we connected to London and met Jonathan Chadwick, the director of the Az Theatre and the one who had made this all possible. The British audience seemed more excited to talk to us than we had ever expected. They welcomed us, then bombarded us with questions. They loved our poems, and we loved their passion.

At the end of the event they asked us: What is freedom to you?

The answer to this question was hopping everywhere in my mind, trying to find an escape. I am still shy, so I kept silent. But inside, I answered: