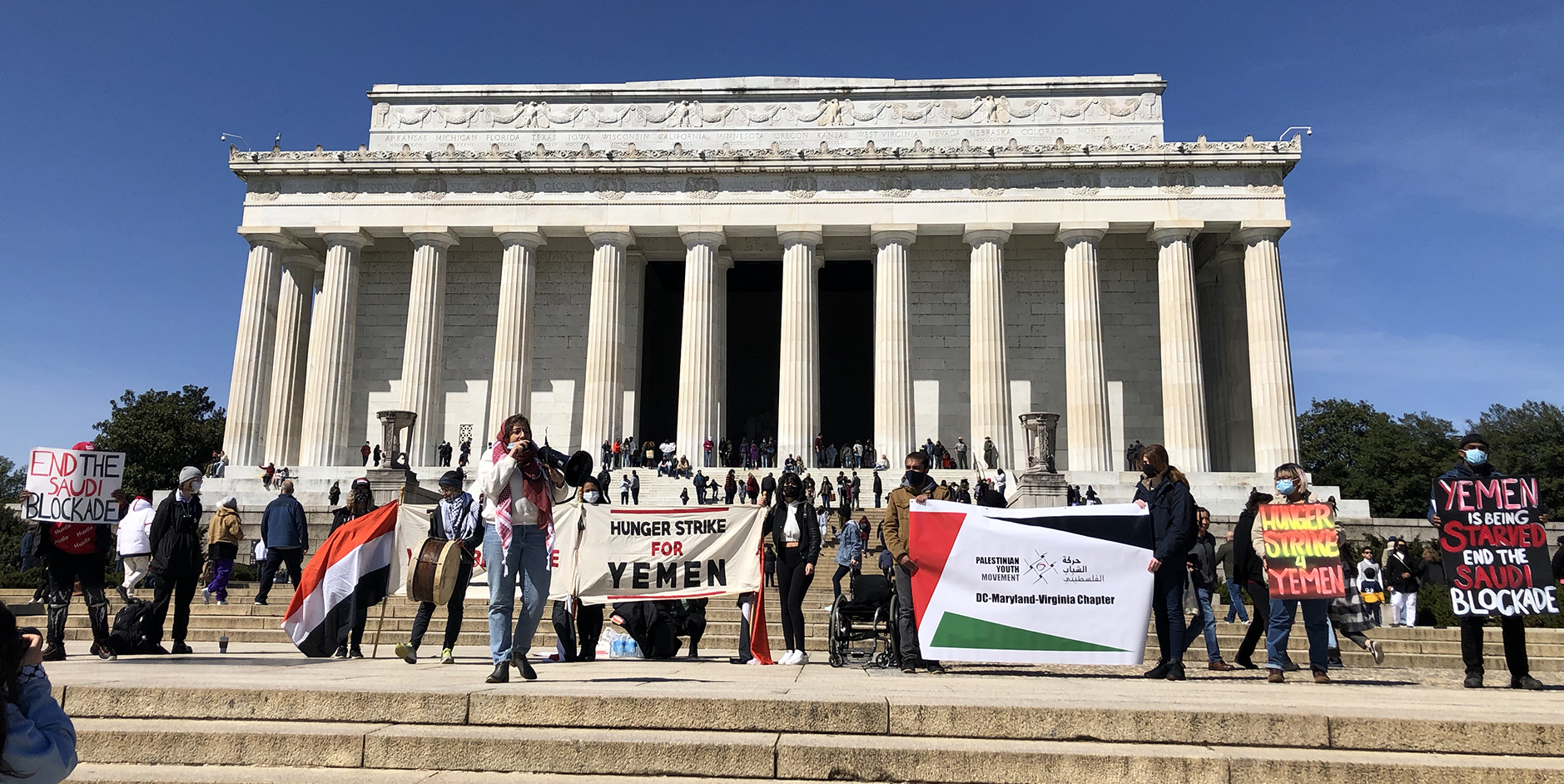 “It’s not normal for people to live like this,” says Iman Saleh, now on her twelfth day of a hunger strike demanding an end to war in Yemen.

April 10, 2021: Since March 29th, in Washington, D.C., Iman Saleh, age 26, has been on a hunger strike to demand an end to the war in Yemen. She is joined by five others from her  group, The Yemeni Liberation Movement. The hunger strikers point out that enforcement of the Saudi Coalition led blockade relies substantially on U.S. weaponry.

Saleh decries the prevention of fuel from entering a key port in Yemen's northern region.

"When people think of famine, they wouldn't consider fuel as contributing to that, but when you're blocking fuel from entering the main port of a country, you're essentially crippling the entire infrastructure," said Saleh  "You can't transport food, you can't power homes, you can't run hospitals without fuel."

Saleh worries people have become desensitized to suffering Yemenis face. Through fasting, she herself feels far more sensitive to the fatigue and strain that accompanies hunger. She hopes the fast will help others overcome indifference,  recognize that the conditions Yemenis face are horribly abnormal, and demand governmental policy changes.

According to UNICEF, 2.3 million children under the age of 5 in Yemen are projected to suffer from acute malnutrition in 2021.

"It's not normal for people to live like this,” says Saleh.

Her words and actions have already touched people taking an online course began with a focus on Yemen.

As the teacher, I asked students to read about the warring parties in Yemen with a special focus on the complicity of the U.S. and of other countries supplying weapons, training, intelligence, and diplomatic cover to the Saudi-led coalition now convulsing  Yemen in devastating war. 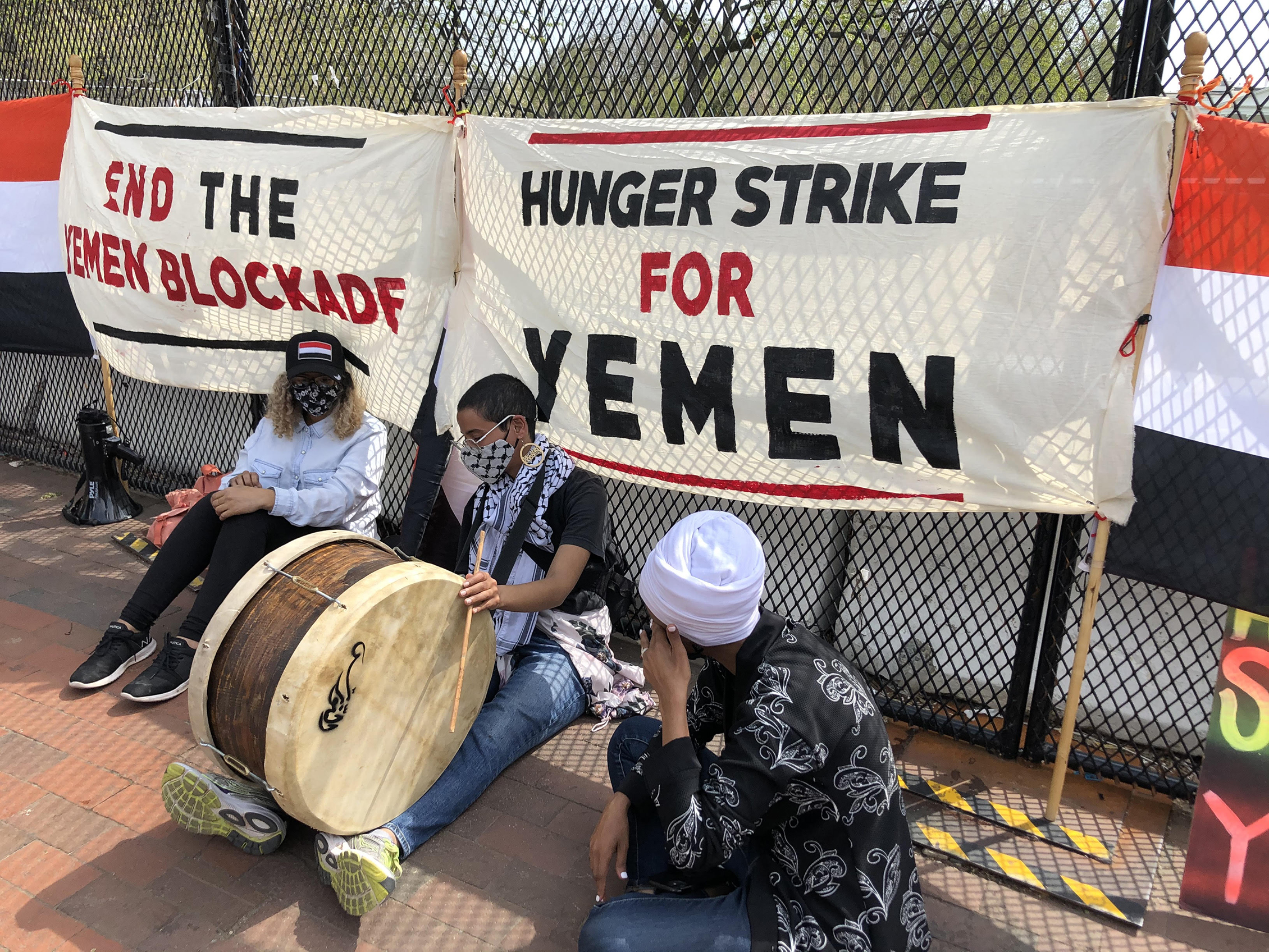 Iman Saleh (with drum) on hunger strike in Washington D.C. to protest the blockade and war against Yemen; seated next to her is Rep. Ilhan Omar.

Last week, we briefly examined an email exchange between two U.S. generals planning the  January, 2017 night raid by U.S. Navy Seals in the rural Yemeni town of Al Ghayyal. The Special Forces operation sought to capture an alleged AQAP (Al Qaeda in the Arab Peninsula) leader. General Dunford told General Votel that all the needed approvals were in place. Before signing off, he wrote: “Good hunting.”

The “hunting” went horribly wrong. Hearing the commotion as U.S. forces raided a village home, other villagers ran to assist. They soon disabled the U.S. Navy Seals’ helicopter. One of the Navy Seals, Ryan Owen, was killed during the first minutes of the fighting. In the ensuing battle, the U.S. forces called for air support. U.S. helicopter gunships arrived and U.S. warplanes started indiscriminately firing missiles into huts. Fahim Mohsen, age 30, huddled in one home along with 12 children and another mother. After a missile tore into their hut, Fahim had to decide whether to remain inside or venture out into the darkness. She chose the latter, holding her infant child and clutching the hand of her five-year-old son, Sinan. Sinan says his mother was killed by a bullet shot from the helicopter gunship behind them. Her infant miraculously survived. That night, in Al Ghayyal, ten children under age 10 were killed. Eight-year-old Nawar Al-Awlaki died by bleeding to death after being shot. “She was hit with a bullet in her neck and suffered for two hours,” her grandfather said. “Why kill children?” he asked.

Mwatana, a Yemeni human rights group, found that the raid killed at least 15 civilians and wounded at least five civilians—all children. Interviewees told Mwatana that women and children, the majority of those killed and wounded, had tried to run away and that they had not engaged in fighting.

Mwatana found no credible information suggesting that the 20 civilians killed or wounded were directly participating in hostilities with AQAP or IS-Y. Of the 15 civilians killed, only one was an adult male, and residents said he was too old, at 65, to fight, and in any case had lost his hearing before the raid. 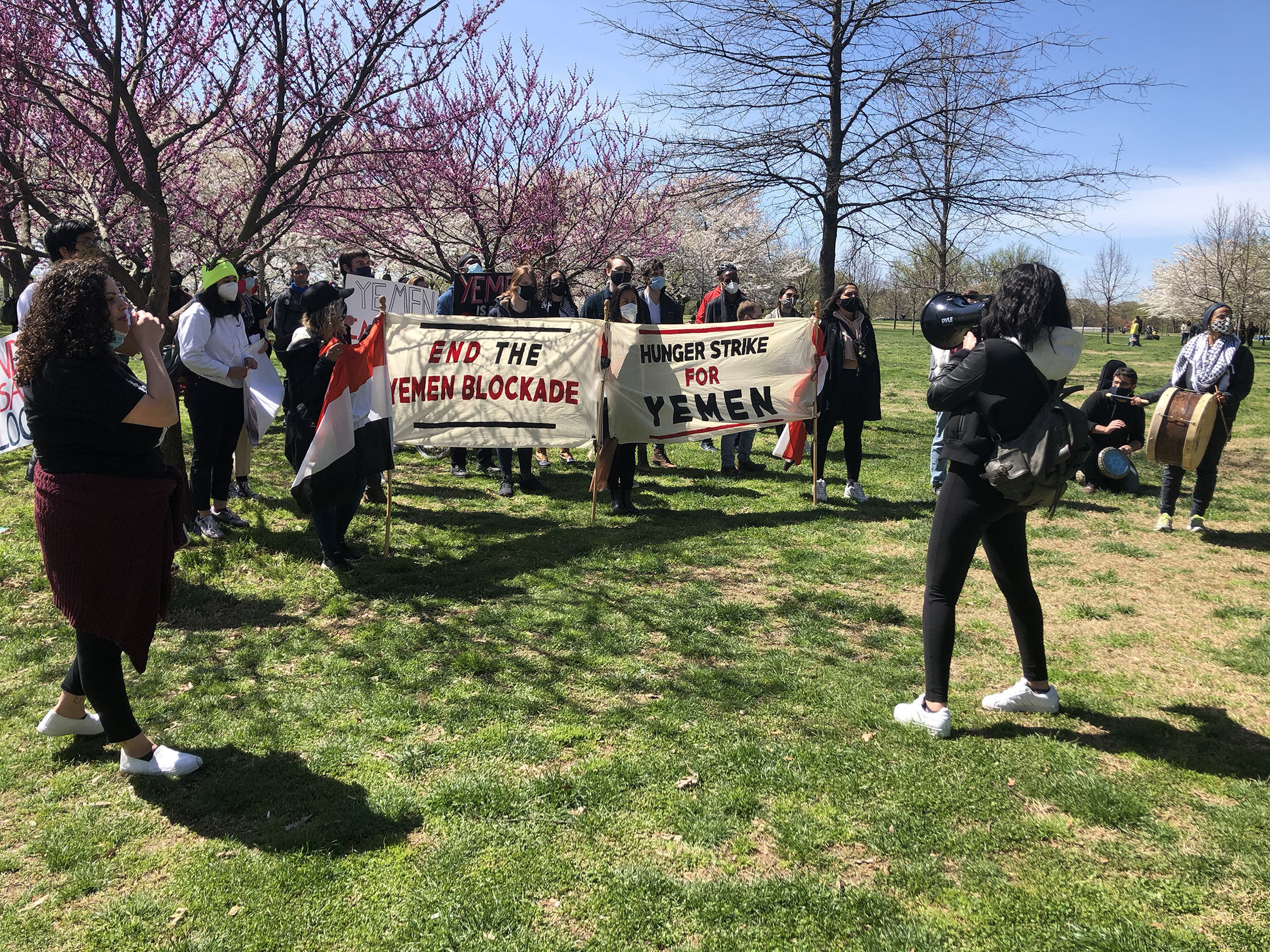 Carolyn Coe, a course participant, read the names of the children killed that night:

ee cummings writes of Maggie and Milly and Molly and May coming out to play one day. As I read the children’s names, I hear the family connections in their common surnames. I imagine how lively the home must have been with so many young children together. Or maybe instead, the home was surprisingly quiet if the children were very hungry, too weak to even cry. I’m sad that these children cannot realize their unique lives as in the ee cummings poem. Neither Aisha nor Halima, Hussein nor Mursil, none of these children can ever come out again to play. 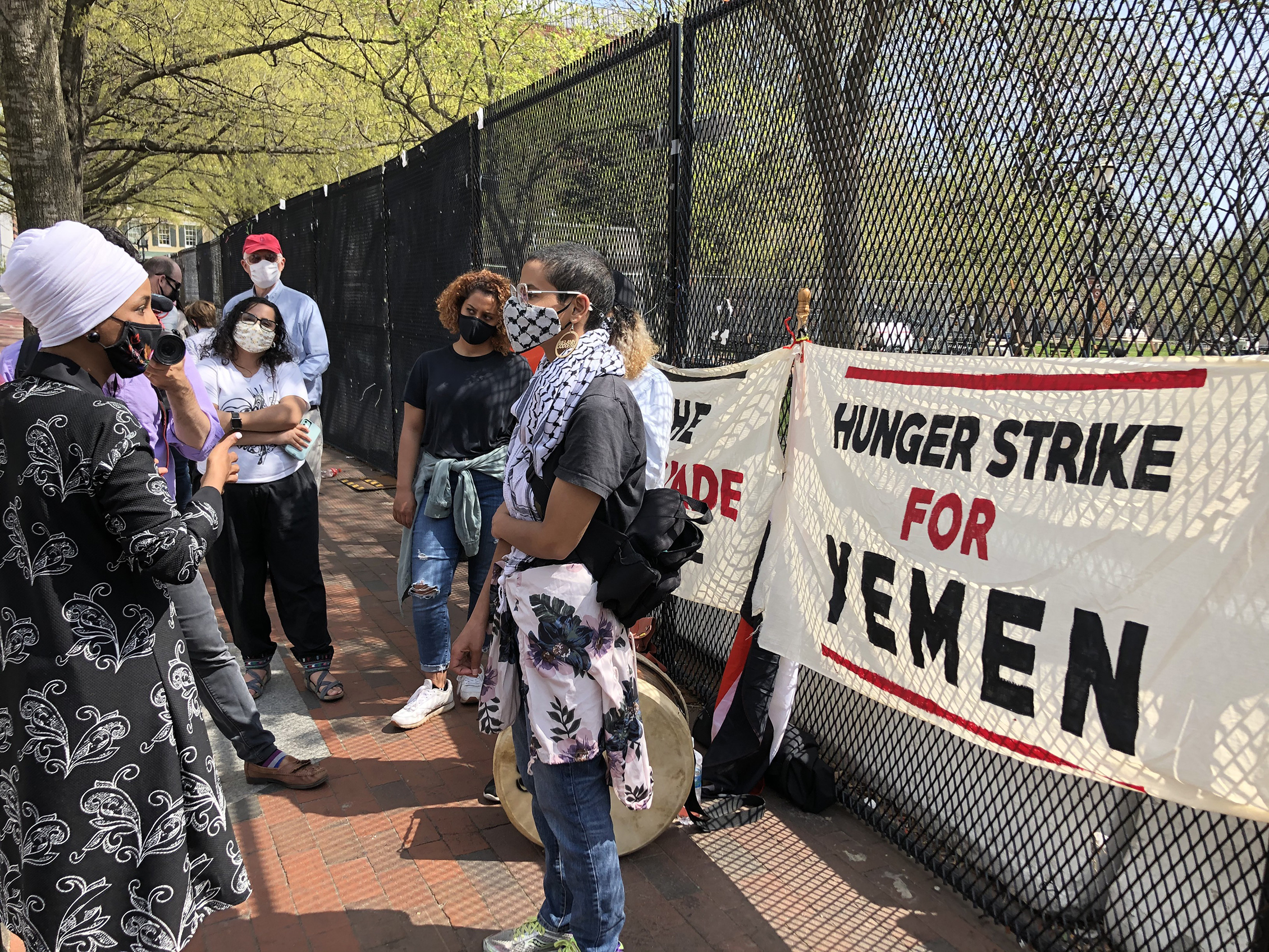 Dave Maciewski, another course participant, mentioned how history seemed to be repeating itself, remembering his experiences visiting mothers and children in Iraq where hundreds of thousands of tiny children couldn’t survive the lethally punitive US/UN economic sanctions.

While UN agencies struggle to distribute desperately needed supplies of food, medicine and fuel, the UN Security Council continues to enforce a resolution, Resolution 2216, which facilitates the blockade and inhibits negotiation. Jamal Benomar, who was  United Nations special envoy for Yemen from 2011-2015,  says that this resolution,  passed in 2015, had been drafted by the Saudis themselves. “Demanding the surrender of the advancing Houthis to a government living in chic hotel-exile in Riyadh was preposterous,” says Benomar, “but irrelevant.”

“The council demanded the Houthis surrender all territory seized, including Sana’a, fully disarm, and allow President Abdo Rabbu Mansour Hadi’s government to resume its responsibilities,” Al Hariri writes. “In essence, it insisted on surrender. That failed, but the same reasons that allowed the UNSC to make clear, forceful demands in 2015 have kept it from trying anything new in the five years since.”

Does the UNSC realistically expect the Ansarallah (informally called the Houthi) to surrender and disarm after maintaining the upper hand in a prolonged war? The Saudi negotiators say nothing about lifting the crippling blockade. The UN Security Council should scrap Resolution 2216 and work hard to create a resolution relevant to the facts on the ground. The new resolution must insist that survival of Yemeni children who are being starved is the number one priority.

Now, in the seventh year of grotesque war, international diplomatic efforts should heed the young Yemeni-Americans fasting in Washington, D.C. We all have a responsibility to listen for the screams of children gunned down from behind as they flee in the darkness from the rubble of their homes. We all have a responsibility to listen for the gasps of little children breathing their last because starvation causes them to die from asphyxiation. The U.S. is complying with a coalition using starvation and disease to wage war. With 400,000 children’s lives in the balance, with a Yemeni child dying once every 75 seconds, what U.S. interests could possibly justify our further hesitation in insisting the blockade must be lifted? The war must end. 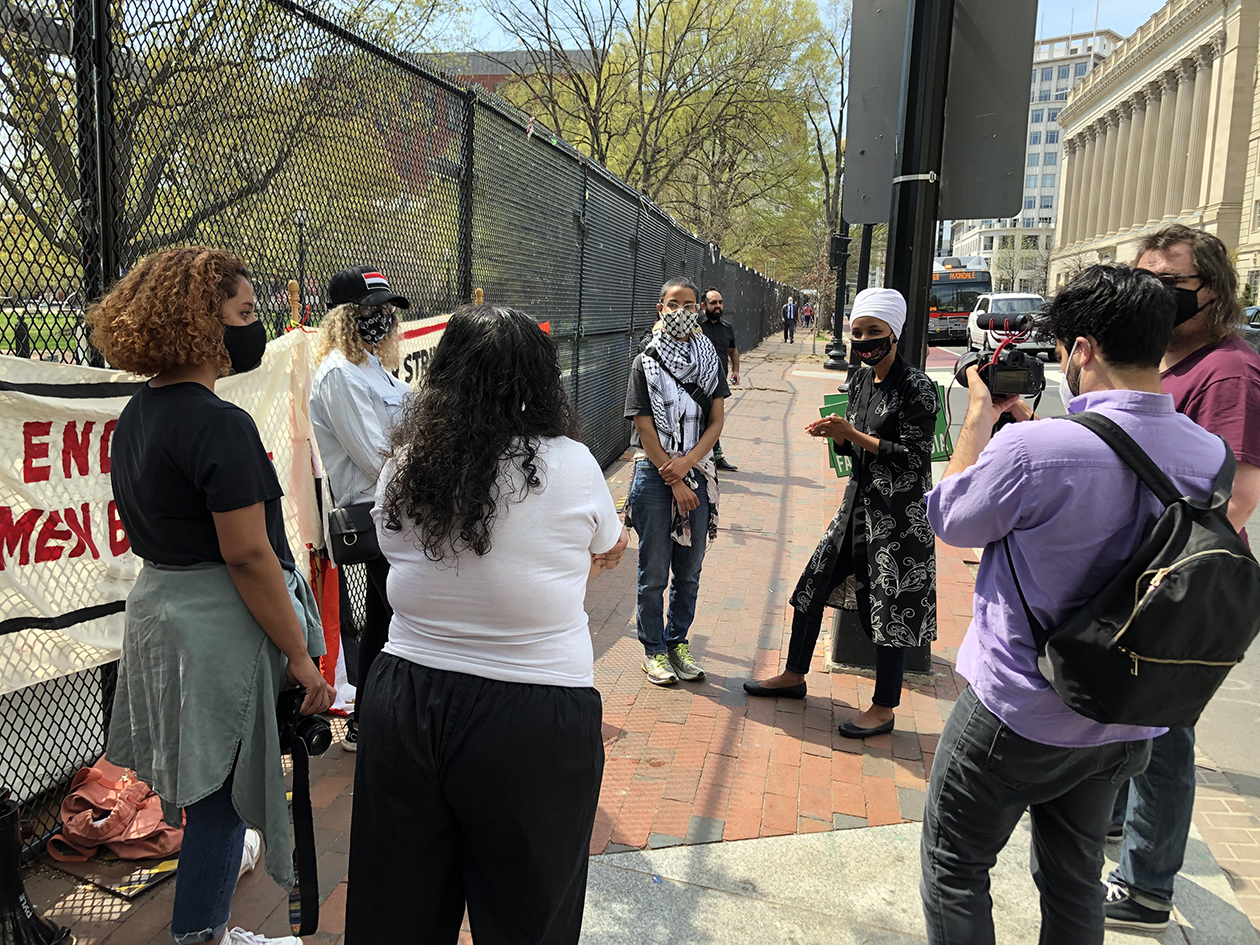 Kathy Kelly, ([email protected]) is a peace activist whose efforts have at times led her into war zones and U.S. prisons.