How Both the Republicans and Democrats are Using Women to Win

Both the Republicans and Democrats are exploiting women towards a November win.  Let’s start with the Republicans.  They need an issue to distract their base from focusing on economic inequality and job losses, otherwise they’d hardly support Romney, the darling of corporate America.   A focus on controlling women’s wombs by rolling back the clock on abortion rights has proved an effective way to channel the anger and hatred of the right wing.

Obama is more subtle.  As Campbell Brown pointed out in an op-ed piece for the May 20th edition of the New York Times, Obama patronizes women, addressing Barnard’s graduating class saying, “It’s a tough economy .  .  .  but you are tougher.”  Hollow words.  What those graduates needed to hear were presidential words  empathetic to their concerns:  a commitment to reducing student loans; a commitment to  a job creation program for college educated grads along with a promise female grads will receive pay equal to their male counterparts.

Young women recognize their membership in a global sisterhood.  Obama would have really scored at Barnard if he had pledged to  reinstate US monies for UN programs to aid women and children in third world countries and to end drone attacks which have killed and continue to kill innocent women and children in Pakistan and Afghanistan.

What’s a woman to do?  It’s like having to choose between a smarmy boyfriend who offers a Stone Age relationship or the hipper guy who charms with empty phrases? 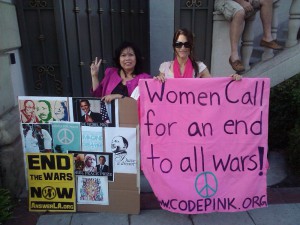 Women Protesting US Wars
We can’t let the two major parties control our agenda.  While we have to protest contraceptive rights and the loss of funding for them we have to keep our eyes on the big issues, like America’s insatiable war appetite. CODEPINK, the women’s peace group, has got it right when they say foreign wars are draining the money from domestic programs vital to women and to our society.  We need to connect the dots by identifying programs that have been cut in favor of more money for the war machine.   We need to insist that defense spending be redirected for food stamps and health care benefits for poor women; abortion services; domestic violence  and government funded daycare.

It’s not a lost cause.  Women are in the majority.  We are familiar with non-violent tactics, which have proven to be the most effective response to a police state.  We can draw inspiration from the women in Montreal who are part of a swelling Canadian movement protesting newly enacted Draconian laws against civil protest.  Every night for the last few nights the women of Montreal, often with children in tow, have taken to the streets banging pots and pans in a show of solidarity for justice.