Hope of Healing for Sundus Shaker Saleh, an Iraqi Mother by Alice Walker 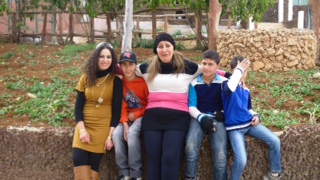 When the US invaded Iraq in 2003 Sundus Shaker Saleh, an Iraqi single mother of five, lost her home and her property, and was forced to flee to Jordan.

A decade later, Saleh is the lead plaintiff in a class action lawsuit against six key members of the Bush administration. They're arguing that, since the war was not conducted in self-defense, and did not have the appropriate authorization by the United Nations, it constituted a “crime of aggression” under international law.

On August 20th the United States Department of Justice requested that George W. Bush, Richard Cheney, Donald Rumsfeld, Colin Powell, Condoleezza Rice and Paul Wolfowitz be granted procedural immunity in the case alleging that they planned and waged the Iraq War in violation of international law. We can't accept this. We demand that these war criminals come forward and hold themselves accountable for the tragic consequences that the war had for Saleh's family and countless other Iraqi civilians

for Sundus Shaker Saleh, Iraqi Mother, with my love. ©2013 by Alice Walker

In our despair that justice is slow

we sit with heads bowed

we will ever be healed.

Perhaps it is a question

And is that not now

almost all of us?

But hope is on the way.

As usual Hope is a woman

all she retains of who

she was; as usual

except for her kids

she has lost almost everything.

Hope is a woman who has lost her fear.

Along with her home, her employment, her parents, her olive trees, her grapes. The peace of independence; the reassuring noises of ordinary

Hope rises, She always does,

did we fail to notice this in all the stories

and she puts on her same

and, penniless, she flings herself

of the very powerful

and all she has to fight with is the reality of what was done to her;

to her country; her people; her children;

All she has as armor is what she has learned

must never be done.

Not in the name of War

and especially never in the

Hope is always the teacher

with the toughest homework.

Our assignment: to grasp

what has never been breathed in our stolen

Without justice, we will never

The organization, Iraq Witness, has filed suit against the Bush Administration on behalf of an Iraqi single mother, Sundus Shaker Saleh. Saleh alleges that the Iraq War was a premeditated war against the Iraqi people -- and now she is the lead plaintiff in a class action lawsuit against six key members of the Bush administration.


For more information about this inspiring standing up of a mother of five, visit the CODEPINK website.