Pledging Allegiance to the Gun-Loving Insanity of the United States 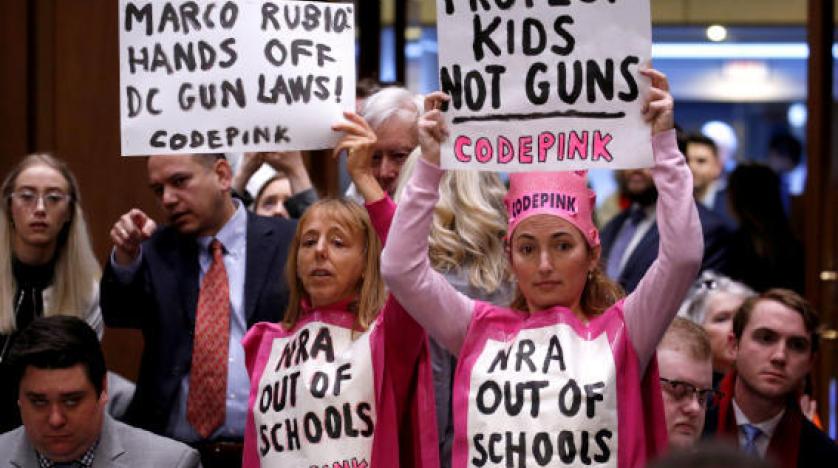 It is time to end the allegiance of too many in our country to guns and violence and to begin to walk a path towards common sense solutions.

On Memorial Day where the United States honors its wars and its war dead, it seems to me that too many in our country have adopted a new pledge of allegiance:

I pledge allegiance to the guns of the United States of America
And to the gun lobbies for which it stands,
A divided nation under guns, easily divisible, with liberty and justice for those with guns!

I changed my flight back home to Hawai’i so I could be at the protest of the National Rifle Association (NRA) in Houston on Friday, May 27 following the mass murder of 19 kids and two teachers at the Robb Elementary School in Uvalde, Texas last week.

The NRA callously refused to postpone its annual gun-selling convention in Houston despite the call for the organization to stand down in wake of yet another mass killing, the third in a period of three weeks with ten killed at a supermarket in Buffalo, New York and one person killed and five wounded in shooting at a church in Laguna Woods, California.

Thousands of angry people of all ages jammed into Discovery Park across the street from the massive George R. Brown convention center in downtown Houston.

Before I left my sister's home for downtown, she warned me: "Remember where you are. This is Texas and anyone can carry a gun—and they won't like what you are doing."

Well, the gun carriers were across the street inside the convention center. Very few came out of the convention to face the thousands who were challenging their dangerous organization.

The crowd challenging the NRA and gun violence was loud but peaceful. The signs people carried hit home on the senseless murders committed by people who were allowed to buy weapons.

In Texas any 18-year-old can purchase an assault rifle and all the ammunition they want as did the 18-year-old who committed the massacre in Uvalde.

As Texas Gov. Greg Abbot and Sen. Ted Cruz—both Republicans—tried to dodge answering the fact that guns kill people but instead blamed murders on mental health alone, the signs in the crowd in Houston in front of the NRA convention took on the lawmakers and politicians in Texas and around the country who are paid off by the gun lobby to kill any proposed gun control legislation.

Interestingly, former President Donald Trump seems to like the gun-toting Second Amendment except when the killer guns are near him as his NRA admirers were required to check their weapons at Trump’s assembly door.

It's time again to put pressure on our lawmakers to carry gun control legislation and make the 2022 midterm elections a one-issue election—on gun control.

As a minimum, requiring background checks before the purchase of weapons, a federal age limit of 21 years before one can purchase a gun, banning assault weapons, and red-flag restrictions for individuals with known mental health issues or for those with a record of violence.

It is time to end the allegiance of too many in our country to guns and violence and to begin to walk a path of sanity toward our own personal and national security.

Ann Wright is a 29 year US Army/Army Reserves veteran who retired as a Colonel and a former US diplomat who resigned in March 2003 in opposition to the war on Iraq.  She served in Nicaragua, Grenada, Somalia, Uzbekistan, Kyrgyzstan, Sierra Leone, Micronesia and Mongolia.  In December 2001 she was on the small team that reopened the US Embassy in Kabul, Afghanistan.  She is the co-author of the book "Dissent: Voices of Conscience."