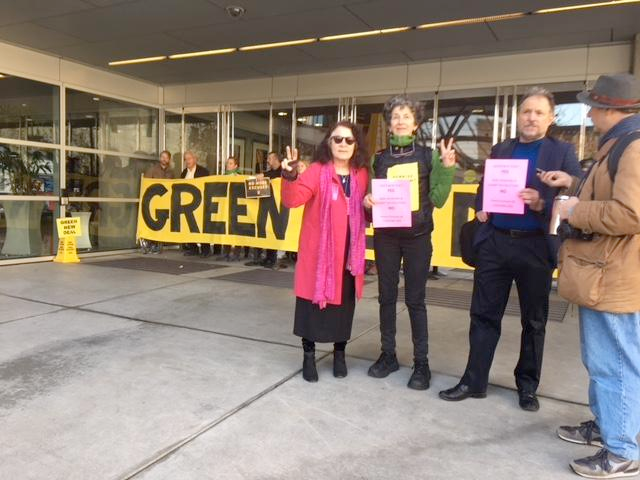 Dear CODEPINK friends,
It was great to join the Sunrise Movement, DSA, 350.org, Sunflower Alliance, and other groups today rallying at Nancy Pelosi's office to ask her to create a "Select Committee to establish a Green New Deal". There were over 200 people at the rally, the majority under age 30. Renay, Susan, Elana, Jackie and I were there to support the Green New Deal demands and the 40 or so volunteers who risked arrest. They blocked the four entrances to the Federal Building for nearly 3 hours in the biting cold, but there were no arrests.

We joined the singing and chanting and held signs that said

Here Susan and I are joined by Dr. Stephen Zunes, Professor of Politics and International Studies at the University of San Francisco, senior policy analyst for the Institute for Policy Studies, and an advisor for the International Center on Nonviolent Conflict, who coincidentally was there to deliver a petition to Pelosi with 10,000 signatures opposing her appointment of NY Representative Eliot Engel to Chair the House Foreign Relations Committee (*see below for details).

I was very grateful that Stephen suggested to the gathering that they incorporate opposition to the U.S. military's endless wars in their movement since that is a major cause of environmental destruction.

I discussed the absence of talk of war as a cause of planet destruction with Michael Eisenscher, National Coordinator of U.S. Labor Against the War, who, like CODEPINK, works to remind groups that the military is the largest polluter on the planet. He feels that the reluctance is due to a wariness to take a position on foreign policy. I agree, but I said that we could instead emphasize the economic and environmental costs of war and weapons, and, like with our Divest from War campaign, taking an economic approach can have a wide appeal.

What is the Sunrise Movement and the Green New Deal?  Co-founder and Sunrise Lead Spokeswoman Varshini Prakash says "the Green New Deal isn’t just about stopping climate change, it’s about taking action to reverse decades and decades of inequality that have led us to this moment in the first place. A key part of a Green New Deal is a job guarantee to give any American a job who’s ready to do their part taking on climate change. That would be transformational for our economy and give us the opportunity to nearly eliminate poverty in America. In addition, we need to make sure that we’re investing in low-income communities, communities of color, and all places that have been left behind by today’s Wall Street-driven economy. What’s at stake right now is whether we have a livable future for my generation and future ones. That’s something that needs to be a priority and that’s something huge majorities of Americans all across the country want to prioritize.

When we declare endless war, when we build the latest fighter jet, when we bail out the banks who deliberately scammed millions of Americans, the same people who shout down proposals to fund a jobs guarantee suddenly shut up, fall in line, and sign off.